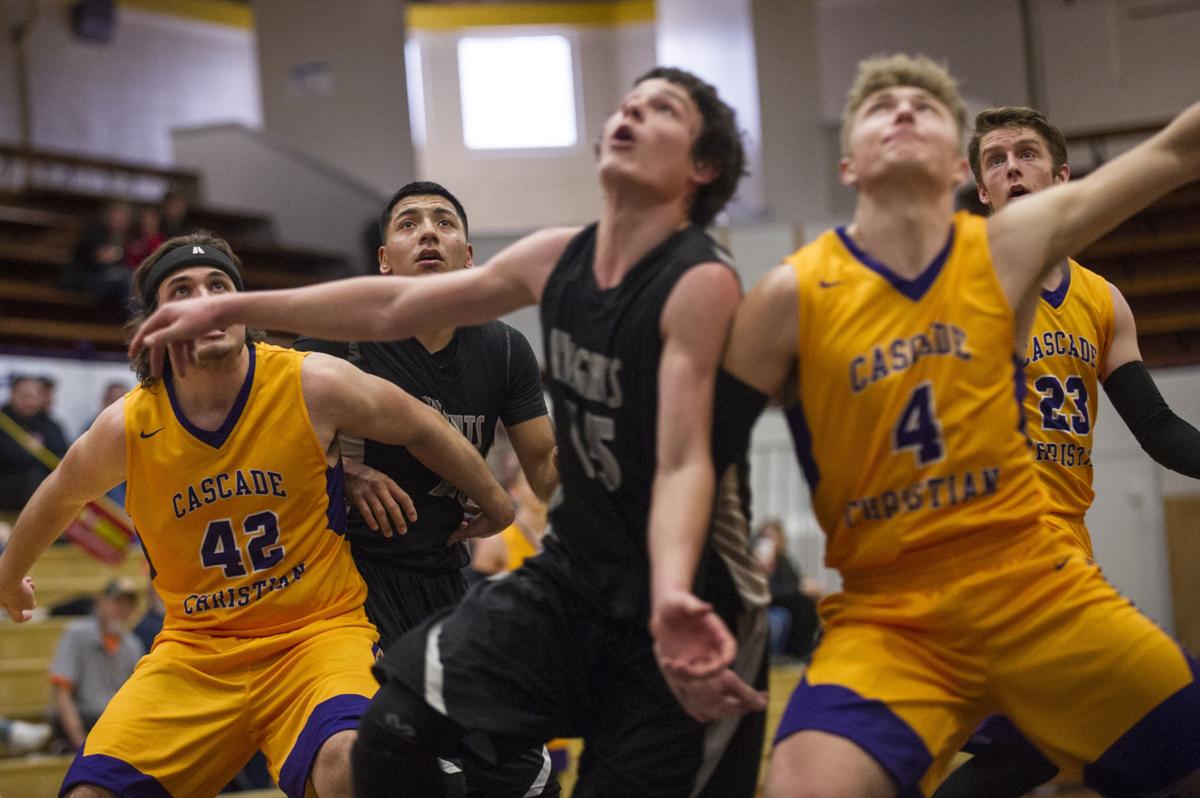 Cascade Christian and Irrigon players look for a rebound during the fourth-place game at the Class 3A state tournament Saturday at Marshfield High School in Coos Bay. 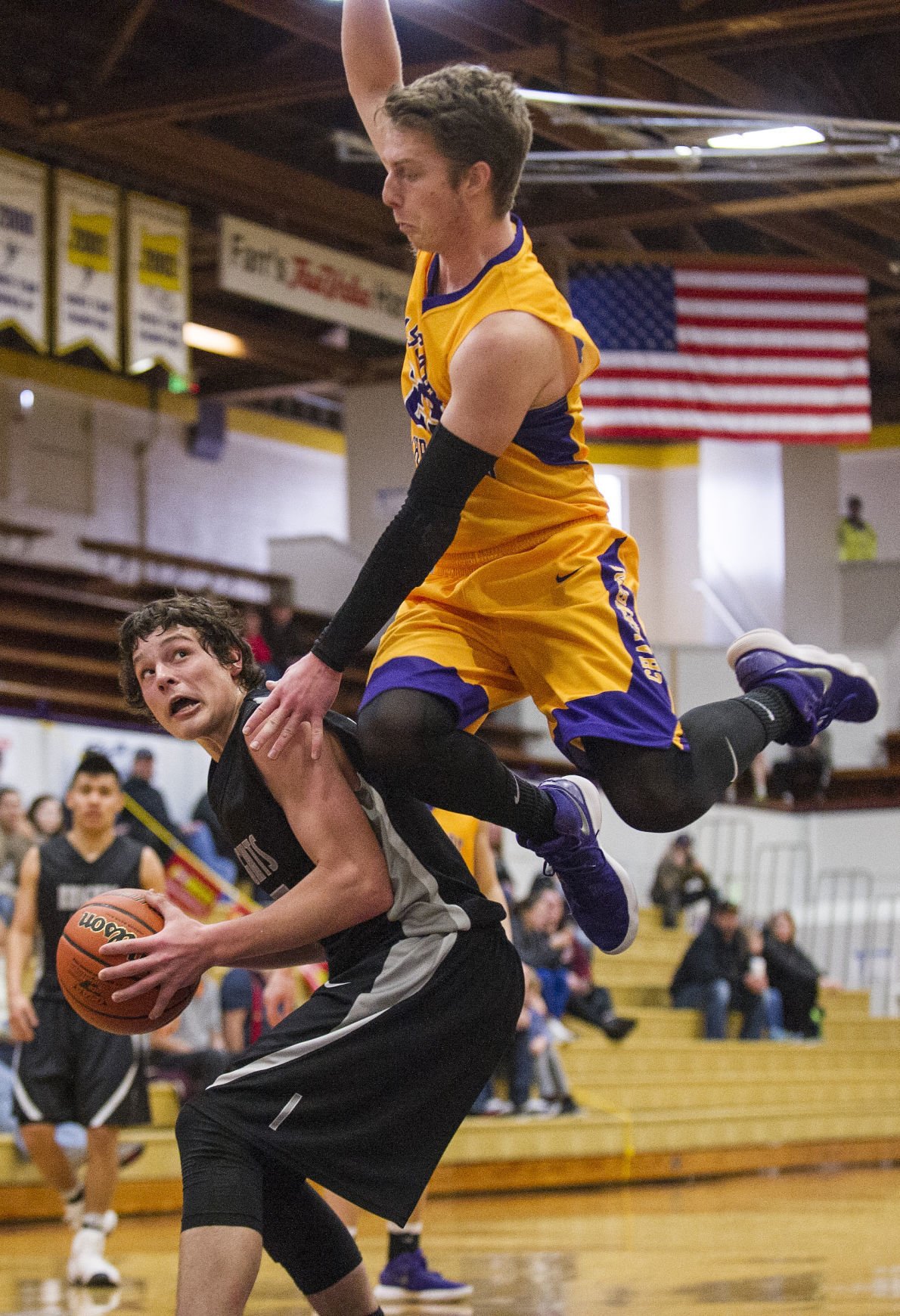 Cascade Christian's Joel McLmore jumps over Irrigon's Keith Fleming as he looks to shoot during the fourth-place game Saturday at Marshfield High School in Coos Bay.

Cascade Christian and Irrigon players look for a rebound during the fourth-place game at the Class 3A state tournament Saturday at Marshfield High School in Coos Bay.

Cascade Christian's Joel McLmore jumps over Irrigon's Keith Fleming as he looks to shoot during the fourth-place game Saturday at Marshfield High School in Coos Bay.

COOS BAY — After getting fifth place last year, the Cascade Christian Challengers made it their mission to advance farther in this year’s Class 3A boys state tournament. On Saturday, with a 54-45 victory over the Irrigon Knights, they succeeded by claiming the fourth-place trophy.

The Knights made the Challengers earn it, however. They jumped out on Cascade Christian with a tenacious man-to-man defense that helped Irrigon build a seven-point second quarter lead.

But, the Challengers were able to use their own stout defense to hang tough, as they went to half down 19-18 and trying to shake-off the 9:45 a.m. start time doldrums.

“We just weren’t playing our speed, our pace, of basketball,” senior Joel McLemore said. “We were being sluggish out there. You could kind of tell from the atmosphere at our morning shoot around, it was just slow. But, it’s rough, getting up at 6 a.m. to come play a 9 a.m. game. So, the first half was really a wake-up call, but it was a better wake-up call than the alarm at 6 a.m., I can tell you that.”

It was an alarm and then some, as coach Brian Morse also noticed his team showing unusual complacency in the face of a challenge. He asked for more action in the second half, and less reaction.

“I thought that Irrigon did a good job of taking us out of our offense,” Morse said. “They were real aggressive and they were bodying us, and we weren’t handling the pressure well. We talked about being mentally strong and being strong with the ball, and not getting back on our heels. And I thought we actually played more on our toes in the second half and a little more aggressive, taking it to them.”

McLemore, Tyler Cochran, and Kyle Reece all found the bottom of the net from 3-point land to start the third quarter, which became a 23-12 quarter for the Challengers. It was a decisive quarter, where McLemore tallied 10 of his game-high 24 points. Cochran finished with 10, while Ben Dunn had six to go with 11 rebounds.

Their defense was able to make the lead stick the rest of the way.

“We always have that with Joel,” Morse said. “We never know when he is going to get hot and he got hot yesterday in the fourth quarter and had all of our points, got hot in the third quarter and gave us a big boost today. It really gets us going when he hits a couple of big 3s, and Tyler Cochran did the same thing when he hit a couple of big shots. Defensively, we are really solid, but when we start getting those offensive shots going we are a really scary team.”

Irrigon head coach Davie Salas cited basketball philosophy after the game. He said, when looking for the difference in the first half to the second, you just need to look at the stat sheet.

“They started hitting,” he said. “Basketball is never confusing. It’s never rocket science about basketball. Cascade came out and hit some big 3s to open that second half and open up a little lead. After that we started concentrating on their shooters and they were able to get inside for a few easy baskets and working for second-chance opportunities and getting them. It happens, that’s basketball. Our shots just weren’t falling and that’s just the way it goes.”

Eric Carillo led the Knights with 13 points, while Johnny Phillips had 12 points and 10 boards. But, the stat book doesn’t tell the whole Knights’ tale of a team heading back to the northeastern part of the state with a trophy after making its first trip to state since moving up from Class 2A a few years ago.

“We came out with energy, but to put three games together is always tough in a three-day tournament,” Salas said. “It is always tough, and our kids gave it everything they had. I’m proud of them, they left it all on the court.”

The Knights received another trophy later in the day, the sportsmanship trophy.

The players also take home something else, an experience that many won’t ever forget.

Joel McLemore was able to make a return trip for his senior year and summed it up nicely.

“This tournament is always nice,” he said. “It is always a good time. It is a wonderful community, the host families are awesome. Just the memories that you make with your teammates, on and off the court, are such a good experience when you are just hanging out with the guys for four days straight.”