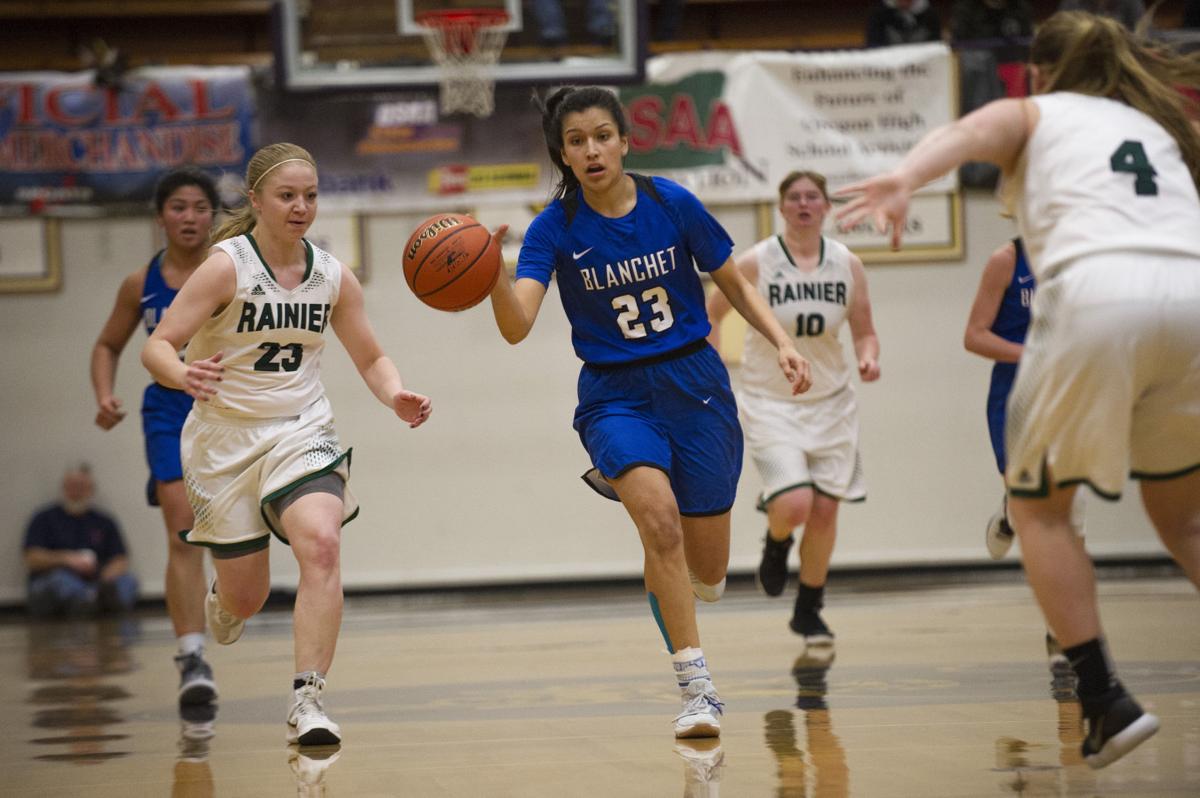 Blanchet Catholic's Ana Coronado takes the ball downcourt against Rainier Saturday during the third-place game at the Class 3A state tournament at Marshfield High School in Coos Bay. 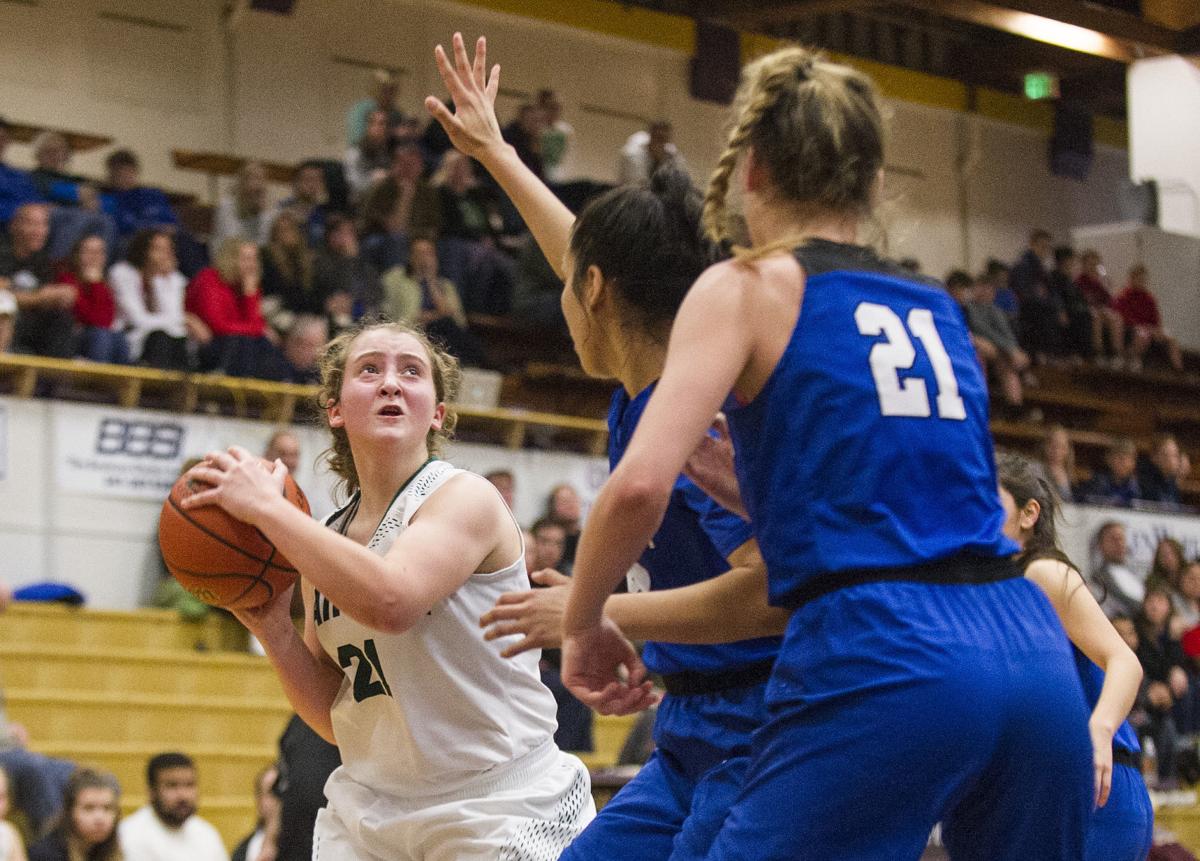 Rainier's Autumn Norman looks to the basket Saturday during their Class 3A state tournament third-place game at Marshfield High School in Coos Bay.

Blanchet Catholic's Ana Coronado takes the ball downcourt against Rainier Saturday during the third-place game at the Class 3A state tournament at Marshfield High School in Coos Bay.

Rainier's Autumn Norman looks to the basket Saturday during their Class 3A state tournament third-place game at Marshfield High School in Coos Bay.

The Blanchet Catholic girls sat knotted with Rainier at 23 after the initial two periods of play with third place in the Class 3A state tournament on the line Saturday. Rainier’s standout point forward Desi Hansen had 12 points and four assists at the half, finding wide-open teammates with passes of impressive vision and accuracy.

But the Cavaliers played with more defensive discipline in the third quarter, using a 17-1 quarter-long run to build a huge lead on the way to a 44-28 win.

“We had a gameplan and we knew what we were doing, but obviously we left a player open (sometimes),” Blanchet Catholic junior Ana Coronado said. “We knew Hansen was gonna try to do what she can to get her team to win. She’s a very, very good player. She’s an awesome player. We knew she was gonna take the game herself.

“But they’re a team too. We knew if we could shut her down we could do whatever we wanted.”

Blanchet knew Hansen would be a handful.

Hansen had a role in Rainier's opening 6-0 run — two hoops and an assist.

After Blanchet Catholic followed with a 13-0 run, Hansen got going again.

She found Hannah Farrell wide open at the block with a crisp pass from the top of the key in the halfcourt, then nabbed a steal and found Aspen Norman with a long bounce pass in transition to get Rainier within three at 13-10. Hansen had three first-quarter assists and Blanchet led 15-12 after the first quarter.

“She’s a tremendous player,” Cavaliers coach Ron Hittner said. “She makes everyone around her better. If a kid’s open for a layup, she doesn’t miss ‘em.”

Rainier was pressuring Blanchet at the perimeter and got some second-quarter steals to keep pace. Blanchet committed eight first-half turnovers and Rainier turned them into 12 points.

Meanwhile, Blanchet was getting the ball inside for layups or free throws. Coronado, who is an accurate and “visionary” passer, found Hailey Ostby several times wide open at the opposite block — once for a layup, once for free throws — just like Hansen hit Farrell.

Coronado’s driving ability also led to her own points. Playing on a pair of foot/ankle injuries suffered just this weekend, Coronado scored 13 points to lead Blanchet and had to be carried piggyback by Ally Jones afterward.

For Rainier, the game was story of two halves.

“First half was great, but second half we fell apart,” Hansen said, adding it was both Rainier faltering and Blanchet forcing the falters. “We’re a defensive team. We should’ve done better. We got in foul trouble and they made a run and we couldn’t make a run back. Knox always says it’s a game of runs. They made a run we just didn’t come back with a run.”

After halftime, Blanchet made an adjustment in its defense. It stopped sagging so much in helping on Hansen, limiting her opportunities to find teammates who’ve leaked toward the basket.

“They’re too good a team,” Rainier coach Doug Knox said. “Good teams lose people every now and then but a good team like that's not gonna lose people too often. (Hansen) had a little trouble today finding people and taking good shots.”

The result was the 17-1 third-quarter run which saw Rainier turn it over on its first four possessions. Hansen was whistled for two offensive fouls and had to sit with four, further compounding Rainier’s troublesome predicament.

“One of the things we do in the first half of games on offense is we don’t show everything so they can’t make adjustments in the second half,” Hittner said. “There might be some things that work in the first half that we don’t try.”

For Rainier, the season’s end is a fitting farewell. Norman, Hansen and Emily Sanchez are four-year varsity players, and the three helped to upset the top-ranked Pleasant Hill Billies as a 16 seed as freshmen.

It’s their third trip to Coos Bay and their first returning with a trophy.

“We’re upset that we lost, but fifth place — not many teams can say they got a trophy,” Hansen said. “How many teams don’t ever make it to the top 16 or can have more wins than they do losses?”

For Blanchet, the ending wasn’t ideal, but still worth celebrating.

The junior-laden club was in the same position as last year: seeded fifth with the likelihood of seeing rival Salem Academy in the semifinals.

It went that route, but 2017’s magic didn’t carry over with the Crusaders beating the Cavaliers in Friday's semifinals. Still, Coronado is optimistic about what the Cavaliers can do as seniors.

“All five teams for that ranking are all really good,” Coronado said. “Anyone could’ve finished anywhere. We’re pretty satisfied with third.”