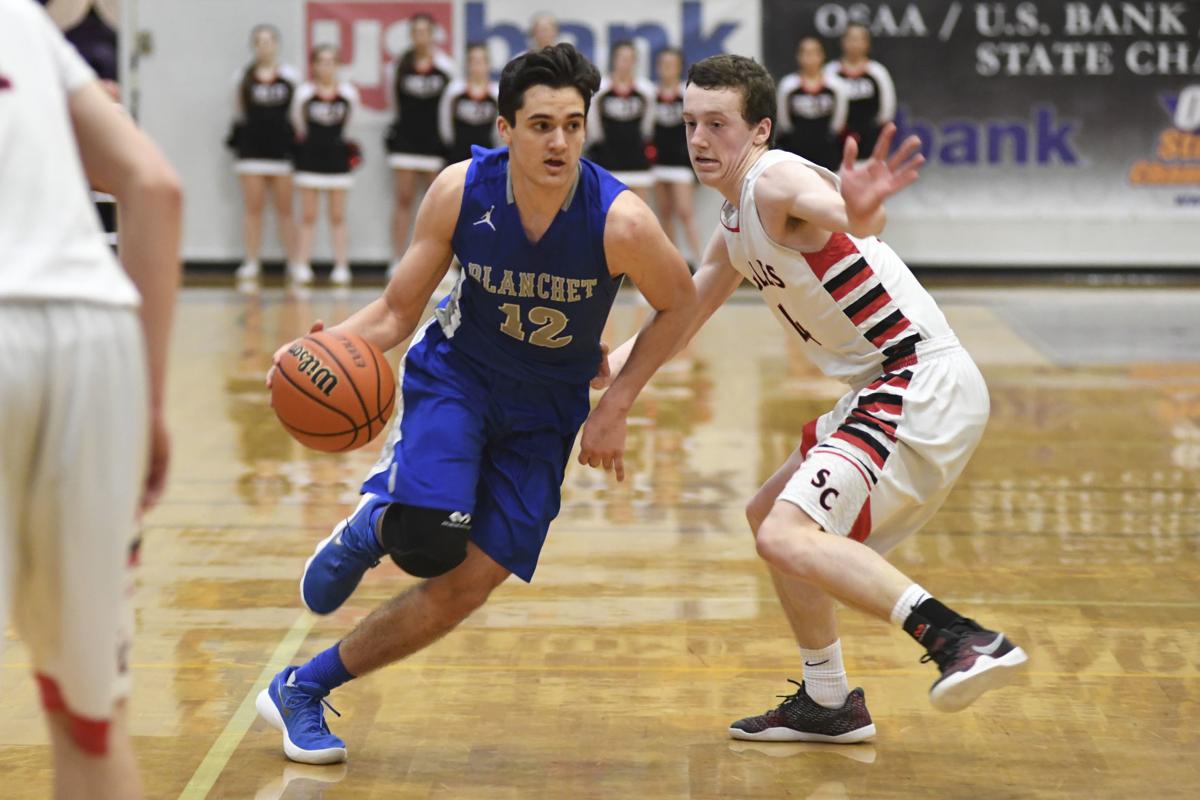 Blanchet Catholic's RJ Veliz skirts around Santiam Christian's Patrick Otis during the third place game at the Class 3A sate tournament on Saturday. 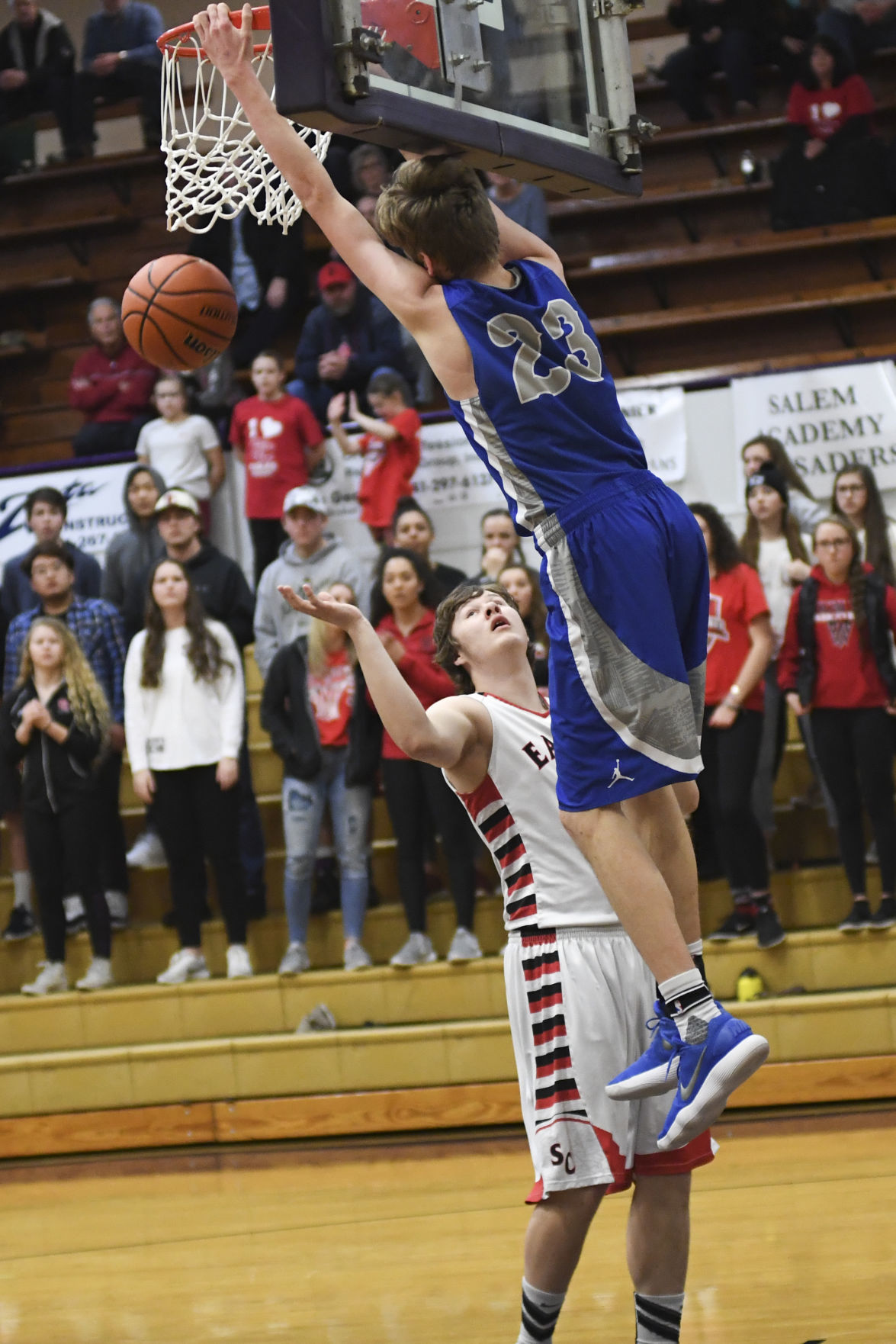 Blanchet Catholic's Mike Bashaw dunks the ball during the first half Saturday. Blanchet Catholic won over Santiam Christian 52-35 on Saturday, to take third place in the OSAA 3A Boys Basketball State Championship.

Blanchet Catholic's RJ Veliz skirts around Santiam Christian's Patrick Otis during the third place game at the Class 3A sate tournament on Saturday.

Blanchet Catholic's Mike Bashaw dunks the ball during the first half Saturday. Blanchet Catholic won over Santiam Christian 52-35 on Saturday, to take third place in the OSAA 3A Boys Basketball State Championship.

COOS BAY — All year long the Blanchet Catholic Cavaliers coveted nothing but a Class 3A boys state basketball title.

A 47-36 loss to top-ranked De La Salle North Catholic ended that possibility, but on Saturday, the Cavaliers fought tooth-and-nail for the right to claim the third-place trophy, beating Santiam Christian 52-45.

After holding off a furious late rally from Santiam Christian, the Cavaliers didn't seem to be smiling any less as they gathered in a mob of family and friends.

“It’s tough, because the whole year our goal was the state championship,” head coach Max Goodman said. “We knew what we had in this team. We couldn’t quite get it done against a good De La Salle team. We talked about it. That third-place game, it’s tough, having to bounce back early in the day, the next day after your heart getting broken the night before. But, we just said, this game is not going to be about basketball players. It’s not going to be about your jump shot. It’s going to be about will, about your heart, and your character. They did it, they gutted it out, and what an awesome way to send off the seniors.”

In the end, though, both teams showed a lot of heart and a lot of character. So, it ended-up having a little bit more to do about those jump shots than anticipated. At least, the jump shots belonging to a couple of Blanchet Catholic standouts.

Both teams showed grit and determination in the opening quarter, with the Eagles gaining a 4-0 advantage on second-chance points to take a 13-9 lead.

In the middle two quarters, however, Blanchet Catholic’s RJ Veliz and Mike Bashaw started to separate themselves from the rest of the pack.

Bashaw hit the second of his four long, long, long, 3-pointers midway through the second quarter and followed it up with a break-away two-handed dunk.

Zach Baugher and Grant Carley combined for eight of Santiam Christian’s 12 points in the second quarter to help the Eagles maintain a 25-23 lead at halftime.

Unfortunately for the Eagles, they started cooling off just as the Cavaliers’ super senior backcourt was just heating-up and back-to-back 3-pointers from Veliz and Bashaw gave Blanchet Catholic a 37-32 lead going into the final quarter.

Bashaw bounced back from a cold night in the semifinals to finish a scintillating 8-for-11 from the field and 4-for-6 from beyond the arc.

“Yesterday I was 0-for-5 from three,” he said. “After yesterday, there was no way I was going to shoot another 0-for-5, that is just not going to happen for me. The player that I am, the coaches just told me to keep shooting.”

It was solid advice. As the fourth quarter ticked away, Santiam Christian was stuck on one made free throw as shots from the field would not fall. On the other side, Bashaw went on a personal 7-0 run, part of his 22 points on the day, to push the game, seemingly, out of reach.

“Seemingly” being the key word, because suddenly shots started falling for the Eagles. A Patrick Otis 3-pointer seemed to knock the lid off the basket, as the lead was cut to 8 with 1:54 left in the game.

More long shots from Baugher, who finished with 16 points, and Grant Carley (13) followed as the Eagles attempted to press and foul to try and whittle the Cavaliers lead away. But, it was too little, too late.

Veliz, who led all scorers with 26, said they were ready to finish it.

For the Eagles, it was a tournament of frustration. But, it was also one that leaves them burning for a chance to return.

“Our shots weren’t falling. We didn’t get out on the Blanchet kids. They played great. They got the ball in the hole more than we did.”

Zach Baugher, a junior, is one of his kids who wants another spin at the wheel.

Veliz and Bashaw accounted for 48 of their team’s 52 points.

“RJ and Mike have carried us throughout the season,” Goodman said. “RJ is unanimous Player of the Year in our league, Mike was the second leading vote getter. Everybody else just knows their role. Steven (Copple), our big guy in the middle, he’s so good at just finding the open spot in the paint when RJ and Mike are driving and they can dish it to him and he had a great shooting percentage all year. Diego and Feddy Torres, Feddy didn’t get to play today, at least one of them will normally hit a couple of 3’s and they play tough defense. Everybody, guys coming off the bench, guys just took their role, embraced it and realized how special RJ and Mike are and it just worked really well all season long.”

It worked almost all the way to the top. But, certainly far enough to leave with some great memories, a trophy, and plenty of smiles at the end of the season.