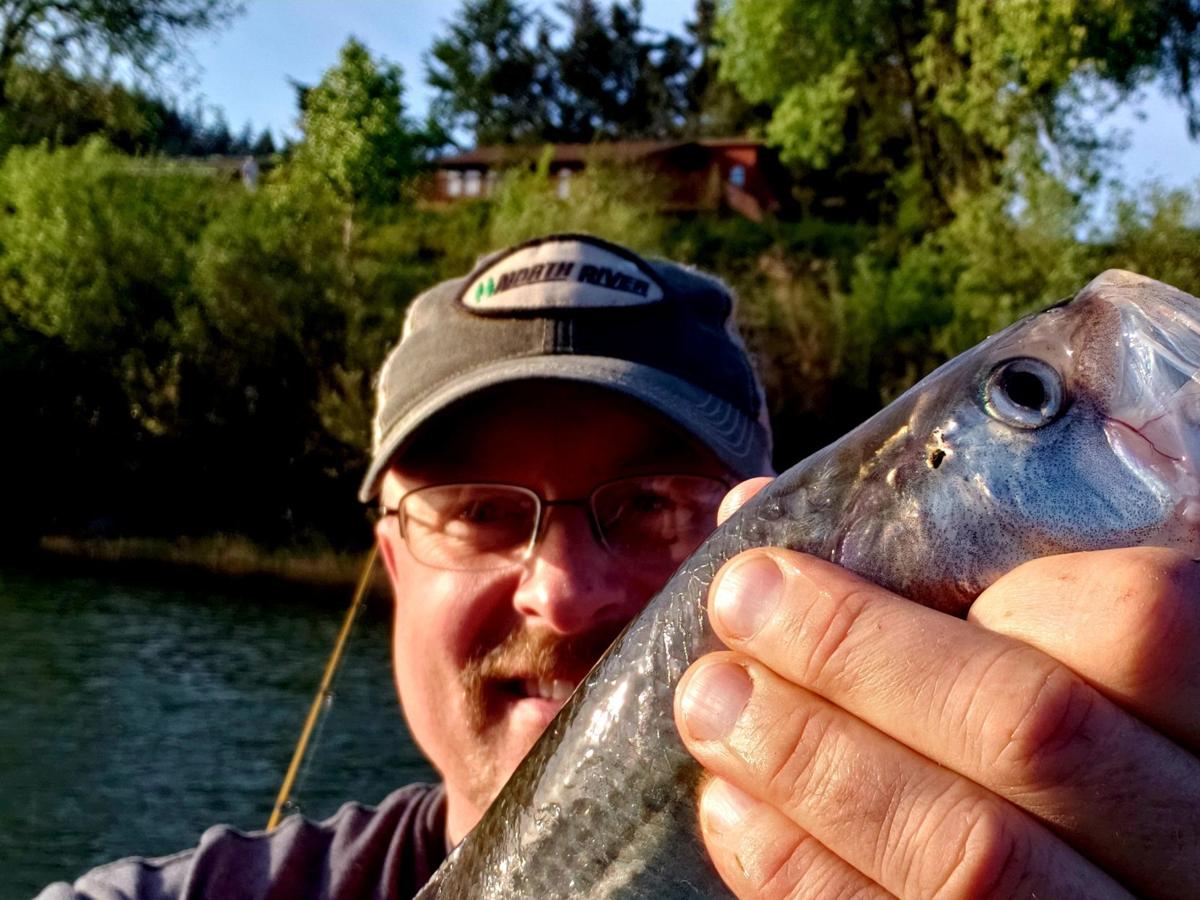 Despite the fact I had the lowest catch, I did indeed land a shad while fishing the Umpqua near Elkton.

Howdy everyone! I hope those of you inland have been enjoying the heat and those of you on the coast have been weathering the incessant wind. As I write this we are just a couple days away from the first day of halibut season and we are all watching the weather with bated breath or perhaps in our case “baited” breath? I hope next week we can report great catches and happy fishermen all around. Last year’s season started off with some of the best grade of halibut we have seen in our area and it will be interesting to see if this year follows suit.

The bay produced a lot of nice crab for us this past weekend, and surf perch is hit or miss with some really nice, big red-tailed perch being brought in!

Basin Tackle is getting reports of a few red-tailed perch in Winchester bay but nothing to get too excited about quite yet. Pretty soon however, y’all will want to be calling Norma Evans to book a charter to get out there and catch a limit of these tasty fish. Give Norma a call at (775)722-1988 and tell her Basin Tackle Rob sent ya!

Speaking of Norma, we got a call this week that went something like this; “hey, do you guys want to come up this afternoon and go shad fis…”. At that point we had already hung up the phone, loaded up the gear, put up a closed early sign under the pretext of needing emergency surgery to donate a kidney or something and hit the road. When we left the Charleston, Coos Bay, North Bend area it was 57 degrees, foggy, and windy as all get out.

When we arrived at our secret location in a place inland on Highway 38 that I won’t name but it sounds like “Belkton” it was 82 degrees, sunny, and nary a breath of wind. I didn’t have a clue that summer had already started so close to the coast and it was a delight to bask in the sun as we sat in Norma’s boat and dropped our lines. We spent a few hours and completely as I predicted Norma won the day with most fish, Clarence came in second, and I was dead last. When this happens I usually tell the people I’m fishing with my intention was solely to enjoy the outdoors and their competitiveness sickens me. This of course is a complete lie as fishing is ALWAYS a competition when fishing with others whether its halibut, tuna, rockfish or in this case shad.

The shad or more correctly the American Shad is an introduced species that originates on the Atlantic coast and lives from Florida all the way north to Newfoundland Canada. The American shad is the largest member of the herring family and when you observe its shiny silver shape and the way its mouth articulates you really will see how it is just a big ole’ herring. This probably explains why they make such amazing bait for halibut.

The reason we were able to catch these fish swimming upstream on our rivers is because they are currently spawning and ultra-light gear and micro-jigs with tiny rubber tails were the ticket. Well, they were the ticket for Norma and Clarence more than me but I did catch a few!

While they normally inhabit the ocean it is this time of year that males and females alike work their way inland to lay up to half a million eggs in the hopes a few will survive to adulthood. Finding just the right bottom of sand and gravel the females will lay their eggs after darkness has fallen but they do not actually lay their eggs directly in the gravel as most fish do. The American Shad will lay her eggs near the surface and only after being fertilized do they slowly sink to the protection of the rocks where they will hatch in about a week.

If conditions are favorable and the fish are not too beat up from their exhausting journey they will return to the ocean and hopefully repeat this cycle the following year. A female shad reaches maturity at four years of age and can live to about seven years which can mean three spring trips upstream and a lot of eggs and babies. What do all these babies do after hatching? They head to where all the cool critters hang out and live in the estuaries for about a year before heading out to the ocean, if they don’t fall prey to all the other fish that is.

A super cool fact about these critters is that they played a part in our country’s inception and many a shad were caught and consumed by General Washington’s troops during lean times and provided nourishment when no other was available. In light of this I think its name of American Shad is well deserved and I now look at them a little differently. Thank you for your part American Shad.

Basin Tackle Rob, or “BTR” is the owner of Basin Tackle www.basintackle.net in the Charleston Marina and can be reached by phone at (541) 888-FISH, by Facebook at Basin Tackle Charleston, or e-mail at basin_tackle@yahoo.com. Robs fishing reports can be heard daily at 6:20 a.m. and 4:20 p.m. on KRSB Best Country 103 out of Roseburg and his Basin Tackle Outdoor Show can be heard Wednesdays at 3 p.m. on kwro.com. In addition to all this he sometimes actually gets out and catches a fish or two.