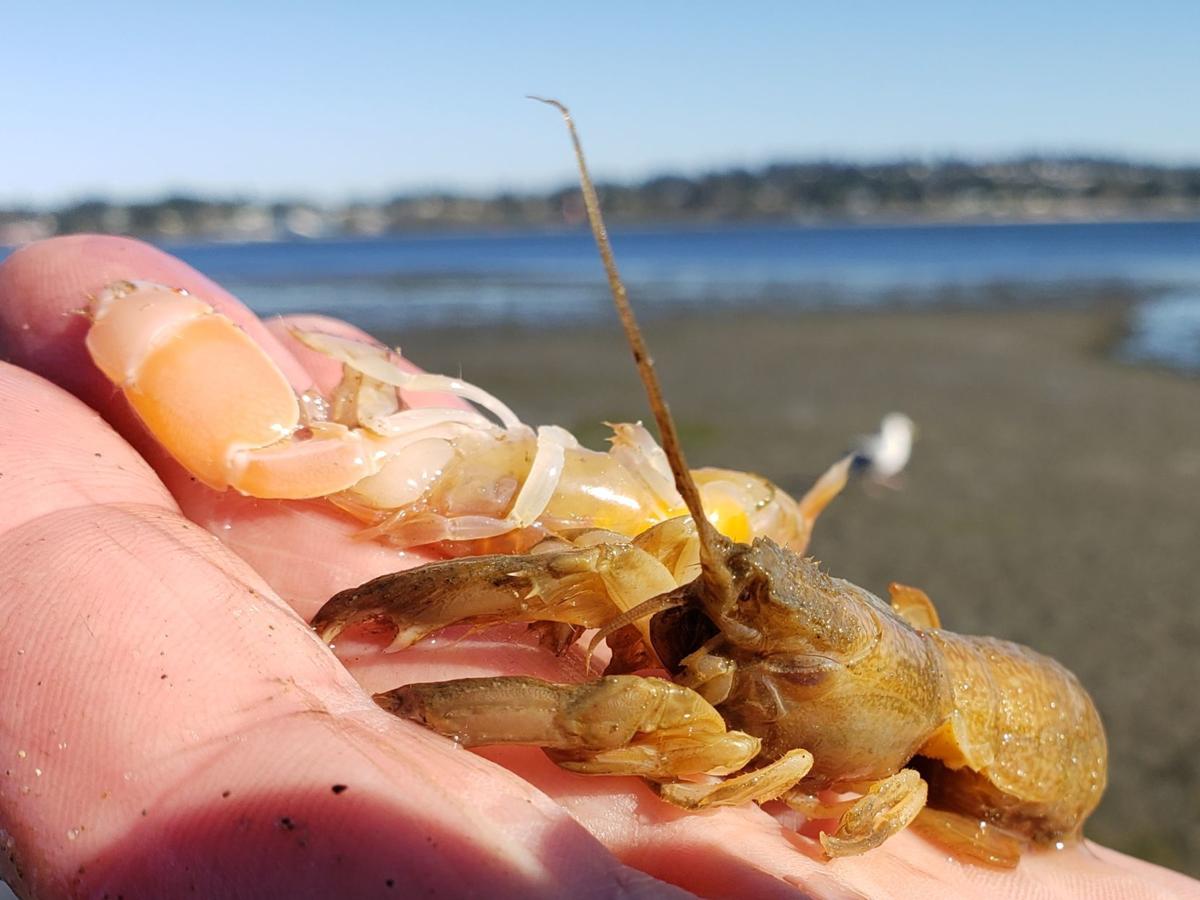 The sand-shrimp (ghost) is more translucent than the blue mud shrimp.

Howdy everyone! Summer-like weather keeps hanging on and I'm all for it! We've had some heavy rains, windy days, and cold mornings, but it seems as if the sunny and warm days keep coming back. This past week I went out mushroom picking after work and it was 74 degrees at about five o'clock in the evening. Pretty good for October. Another thing that is pretty good for October is the tuna fishing. Typically we do NOT fish for tuna off of our shores in October but this year we do. Some of the smaller commercial vessels are still plugging away relatively close to shore (in tuna talk 30 miles is close to shore) and even some of the sport fleet are still bringing in fish numbering in the twenties and thirties!

The sand-shrimp (ghost) is more translucent than the blue mud shrimp.

On the rockfishing front folks are doing good both nearshore and in the deeper water. Halibut season remains open and we've weighed in some nice ones in the seventies and eighty pound range. Crabbing is picking up quickly in the ocean and we are seeing some full pots of nice full Dungeness as of late. Remember that the crabbing season for the ocean shuts down Oct. 16 and will reopen the first of December. Crabbing will remain open in the bays during this time.

A few weeks ago I was telling you all how Basin Tackle is now pumping and selling our own sand-shrimp. Today I was out pumping these morsels of bait when I sucked up something relatively foreign, at least to me. It is a critter quite similar to a sand-shrimp but this specimen is only the second one I have seen in my years at Basin Tackle.

It looks kind of “sand-shrimpy” and kind of like a crawfish at the same time but is neither.

The first one I saw was  couple of years ago and I had to Google this thing to figure out what it was but this time I didn't. I knew right away it was a blue mud shrimp. These critters also are sometimes known as just “mud shrimp,” or “marine crawfish."

The blue mud shrimp ranges from Alaska to about Morro Bay in California and is becoming less and less common in our mud flats due to a parasite that attaches itself to the shrimp and prevents reproduction. This parasite is actually a type of clam. I am unsure exactly how this clam inhibits reproduction but next time you head out to a social function stick a giant clam to your side and see if you get ANY phone numbers from the opposite sex. I don’t think you will.

The blue mud shrimp are pretty particular about where they live and require just the right habitat found only in marine estuaries. This typically is a muddier region than is inhabited by the sand-shrimp we sell in the shop. This sometimes creates a problem because those same spots are often used for oyster beds. Back in the day before we knew better, chemicals were deployed to kill these shrimp. It turns out that as the shrimp dig the burrows they inhabit and reproduce in they kick up a lot of microscopic silt that adversely affects the growth of the oysters, hence the poisoning. But not to worry because this practice has been stopped, mostly due to customer outcry.

These critters feed on organic detritus they collect with their hairy legs (possibly equally as offensive as a giant clam attached and another reason reproduction is limited) and grow to several inches in length in their Y shaped burrows. We don’t see too many of them around here and if you pump one up and want to throw it back it probably wont find its way home or be able to dig a new one. Tough call, but I’m probably calling it bait.

Whether you are harassing a defenseless species plagued with almost insurmountable odds or having fun using them to catch tasty fish, I hope to see you out there!

Rob Gensorek is the owner of Basin Tackle www.basintackle.net in the Charleston Marina and can be reached by phone at 541-888-FISH, by Facebook at Basin Tackle Charleston, or e-mail at basin_tackle@yahoo.com. Rob's fishing reports can be heard daily at 6:20 a.m. and 4:20 p.m. on KRSB Best Country 103 out of Roseburg and his Basin Tackle Outdoor Show can be heard Wednesdays at 3 p.m. on kwro.com. In addition to all this he sometimes actually gets out and catches a fish or two.

Fitness for Recovery provides space for people recovering from drug and alcohol abuse to exercise and build a supportive community away from stressors that might cause a lapse in sobriety.