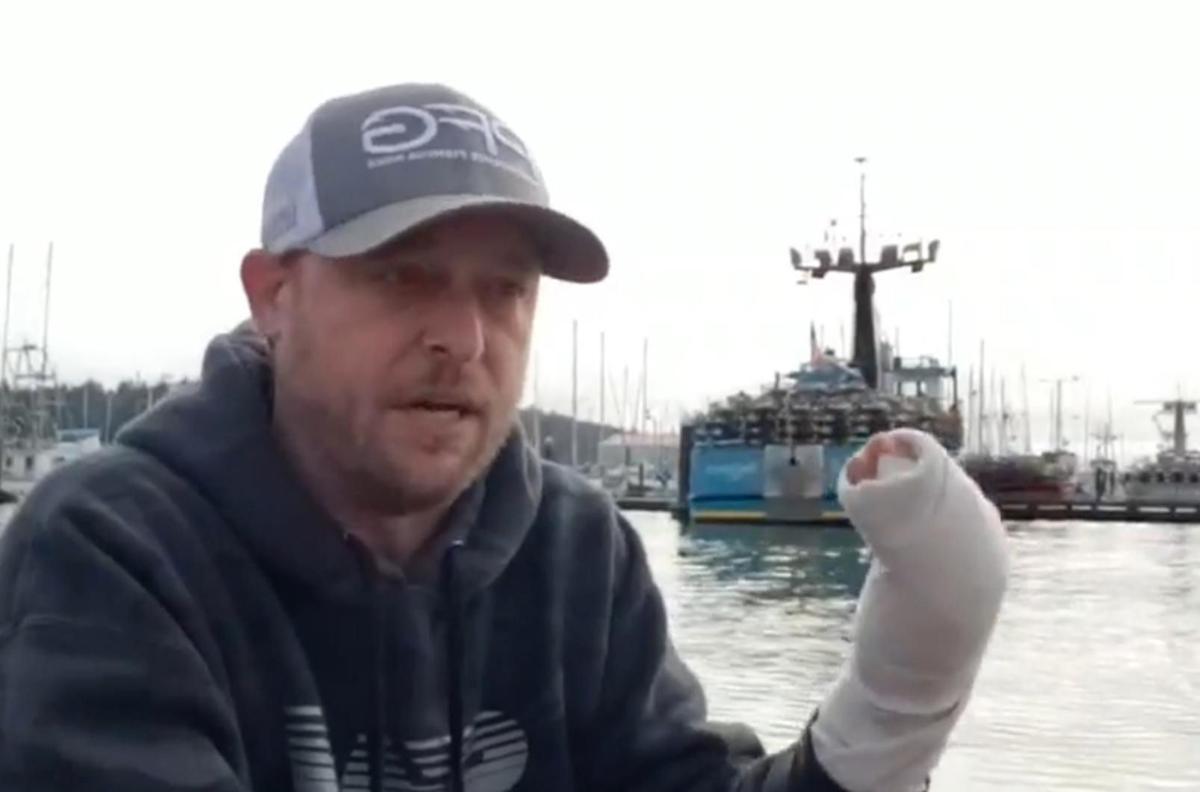 Curtis Green, Charleston Marina. This screen grab image is from the harrowing tale from the fuel dock to the sinking Darean Rose.

Howdy y'all, I know you haven't been on the ocean lately because almost no one has. All but the largest commercial crab boats have been stuck at the docks. Howling winds that can topple anyone in their path and giant ocean swells that crash into and through anything in their way. Relentless and without mercy, a powerful maelstrom of driving and pounding water stretching to consume whatever it can reach. That's what the ocean is this time of year. It's dangerous. It's deadly. It's where men venture forth to seek their fortunes but in the end mostly just scrape out a living, if their lucky.

The commercial crab season is the most profitable commercial fishing season on the Oregon coast and it takes place during the deadliest of times. Every year we loose someone or something along the Oregon coast and while things can be replaced no matter how steep the financial burden, a life cannot. When a life is lost, it is not just the immediate chaos and confusion and the end of a single story but, the end of an infinite amount of stories both current and to come. When a life is lost before it's time it's as if a link in a long stretching chain has been removed and can no longer pass its strength forward.

But sometimes — when that link is stretched, cracking, close to breaking, and it's holding by a proverbial thread — something miraculous happens and keeps that chain intact.

Such a thing happened here in Charleston recently and three links of a chain remain intact, strong despite being brought to their breaking points.

A commercial crabbing vessel in our marina, on a boring nondescript day like any other we may experience in December, was making her way along. The vessel "Darean Rose," had four men on board. She was loaded with crab gear and needed fuel, a pretty regular occurrence on a pretty regular day. At the fuel dock the Darean Rose was so close to shore you could have thrown a rock from her deck, that's where trouble happened. She ran aground almost directly in front of her destination — on a sandbar that seemed just mere feet away from the safety of shore.

Surely something so menial, so close to the safety and comfort of dry land couldn't be anything more than an inconvenience. That's what everyone thought at first, well, almost everyone. As the vessel attempted to move off the sandbar, with forward, reverse, any movement at all to get unstuck she began to list.

One person was aware of the grave situation before anyone else really understood the gravity of the situation. That person started calling for help, yelling and pleading for someone to bring a boat alongside. By the time others realized why, it was too late, the Darean Rose was on her side with water flooding in fast.

One of the crewmen was outside the wheelhouse and managed to stay upright as the vessel rolled slowly slipping into the cold dark water.

The person yelling for help changed his call to a plea for a co-worker to bring him a hammer. “Get a hammer, get a hammer, he's stuck inside!”

Loaded with 151 crab-pots she rolled, slipping into the water, large pots and gear landing on the wheelhouse door.

Just seconds later a hammer thrust into his hands, with no regard for anything other than the person before him trapped in the wheelhouse, he swam, his dog behind him all the way, heading into danger. At the wheelhouse he crawled up as best he could and began hitting the Plexiglas window with all his might. But, Plexiglas is meant to withstand just such a thing, it didn't look good.

This hero looking through now scratched, cracked plex saw not one, but three men looking back at him! Three men that that were going to die.

With renewed strength born of fear and adrenaline, he smashed harder and harder. As the vessel slowly slipped deeper cracks in the window grew. His foot caught on something, perhaps snagged on a cleat. He too was being pulled into the abyss.

Somehow he broke free, but also lost the hammer. Exhaustion started to set in, but again he stared through the Plexiglas at three doomed men.

This was it — moments, seconds, a minute, it didn't matter. These men needed out NOW! This hero smashed and beat at the glass with bare hands, gripping and pulling at the sharp window with all he had left. By the grace of God, he got that window open enough to pull all three men to safety!

It was over as quickly as it started. Just a moments before, Curtis Green was standing on the fuel dock. He owns and runs Charleston Marina. Green disregarded any and all concerns for his own safety and swam, hammer in hand into the jaws of danger and certain death. Just seconds before, a regular guy having a regular day. But now, Curtis Green is, and will forever more, be a hero born of icy cold water and shards of window that sliced through his hands.

This is not the over-used noun “hero” that we banter about these days, but the real deal. And while this story may sound sensationalized I assure you it is not. Thank you Curtis for keeping those three links attached to their chains.

Rob Gensorek is the owner of Basin Tackle www.basintackle.net in the Charleston Marina and can be reached by phone at (541) 888-FISH, by Facebook at Basin Tackle Charleston, or e-mail at basin_tackle@yahoo.com. Robs fishing reports can be heard daily at 6:20 a.m. and 4:20 p.m. on KRSB Best Country 103 out of Roseburg and his Basin Tackle Outdoor Show can be heard Wednesdays at 3 p.m. at kwro.com. In addition to all this he sometimes actually gets out and catches a fish or two.