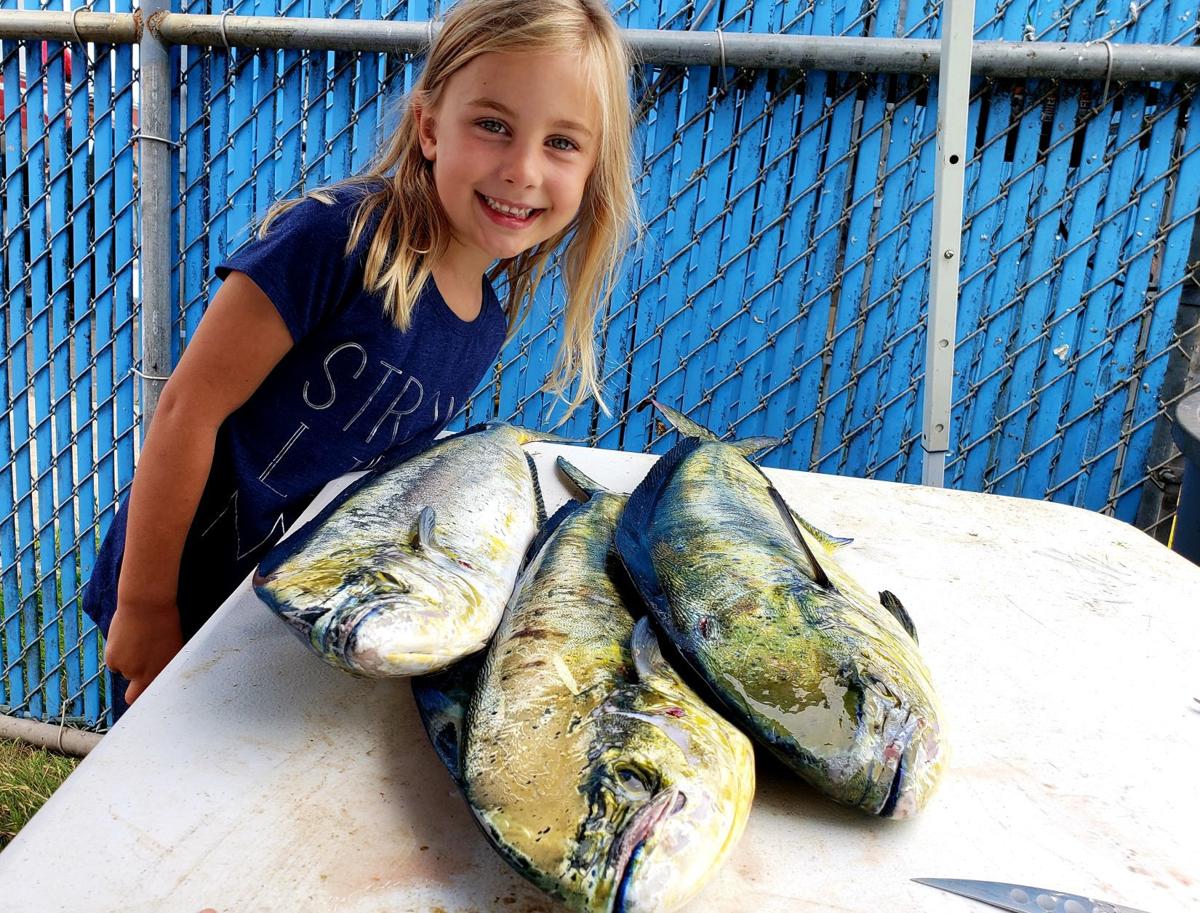 Junior Basin Tackle team member Olivia (Livie) Grace glows along side the catch of dorado on a recent fishing adventure aboard Fishin' Trips Charters. All three were caught at the same time! 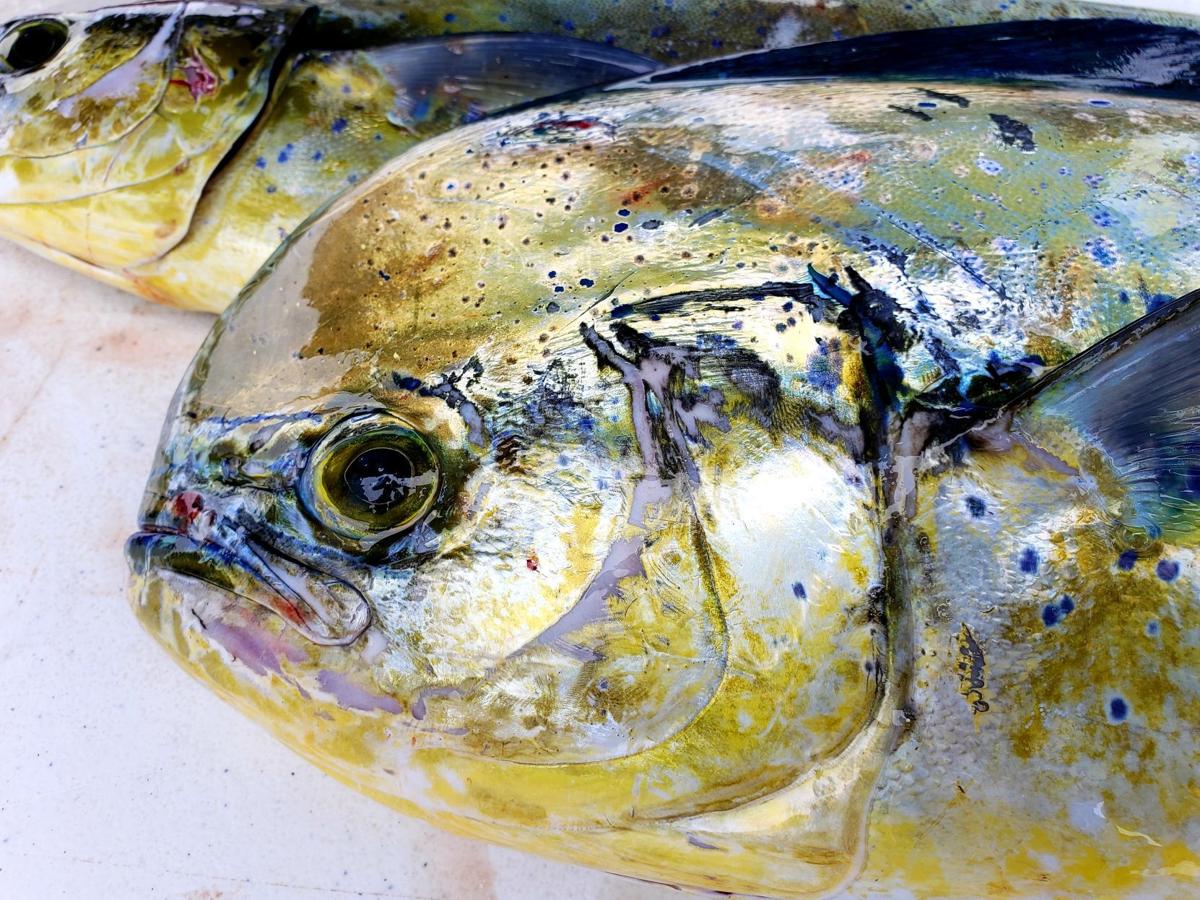 Dorado are also known as mahi-mahi or dolphinfish.

Junior Basin Tackle team member Olivia (Livie) Grace glows along side the catch of dorado on a recent fishing adventure aboard Fishin' Trips Charters. All three were caught at the same time!

Dorado are also known as mahi-mahi or dolphinfish.

Howdy everyone! I finally feel fully and completely like summer is here; temperatures on the coast have been in the 70's and as I write this from my hotel in Roseburg my little ones are watching the sun rise above the Umpqua River. The patio door facing the river is wide open, the clean morning air and the smell of fresh brewed coffee awaken our senses. The sun is shining in and the day promises to be clear and in the nineties just as it was yesterday. Summer in Oregon is magnificent.

The ocean has been calm, flat, warm, and full of fish lately, particularly tuna! We are undoubtedly experiencing the single best tuna season we have ever seen. I have spoken with quite a few anglers that have been coming out here for decades and they all agree this is the best they have ever seen.

My absolute favorite part of this season is gearing up newcomers for tuna fishing and giving them a set of coordinates. Well, that's the second best part. The best part is when they come back covered in tuna blood and looking at me like they just struck gold and had one of the best experiences in their lives.

Some of the most amazing fish we have seen lately are the exotic pelagic species that are making their way up with the warm currents. We see some of these exotic species every season and sometimes more than others but this year, this year is something special. We have seen more bluefin tuna and dorado than ever before and even...get this...marlin or some other sort of billfish. I know some of you are doubting this and I don't blame you one bit. The reports of billfish have been far fewer than the other species but some of the folks that have reported them are folks that I know personally and trust with such information. The reason we are not landing any of these is because we are not geared up for them. Albacore gear is different and generally a lot lighter than one would use for billfish, but I'm confident that one of these days, one of these years, someone will bring one in.

Next to albacore the fish we are singularly seeing the most of are the dorado, lots and lots of dorado. Typically I will see one, maybe two per season, but this season it has been in the dozens!

Fishin' Trips Charters was out with clients albacore fishing when the ran into an honest to goodness school of these weirdly beautiful fish. Every single person on board swore that hundreds of them were jumping all around the boat! Up to ten feet in the air, twisting and wriggling, splashing and dancing on the water and just below the surface. Captain Clarence came to a full stop right in the middle of all this action and four fishing poles were deployed with instant results! Four dorado fought with all their might as fishing poles bent and clickers and drags on reels hummed and clicked until it was over. Three of the four were successfully landed and I wouldn't have believed this story myself if it wasn't for these fish plopped on the table before me. This singular event may possibly be the only time in local history where four dorado were hooked up on one boat at the same time!

Dorado are also known as mahi-mahi or dolphinfish and are a prized and coveted fish around the world with top restaurants proudly serving them on their top-end menus. Rarely growing larger than about thirty pounds these yellow, gold, and green Christmas ornament looking fish are a tropical or sub-tropical species that live to about seven years of age, except, like, for a bunch around here this year!

These fish are long and flat and it's their body shape that allows them to cut through the water and jump and twist like they do in addition to swimming up to fifty five miles an hour!

Dorado spawn at any time and can do so two or three times a year. They reach reproductive age by about five months and a steady diet of squid, crab, mackerel, and whatever else they can find make them one of the fastest growing fish in the sea!

We had a really slow start to tuna season this year but we have certainly made up for it so far! Whether it's a bluefin, albacore, or a coveted dorado on the end of your line, I hope to see you out there!

Rob Gensorek is the owner of Basin Tackle www.basintackle.net in the Charleston Marina and can be reached by phone at (541) 888-FISH, by Facebook at Basin Tackle Charleston, or e-mail at basin_tackle@yahoo.com. Robs fishing reports can be heard daily on several radio stations and his Basin Tackle Outdoor Show can be heard Wednesdays at 3 p.m. on kwro.com. In addition to all this he sometimes actually gets out and catches a fish or two.