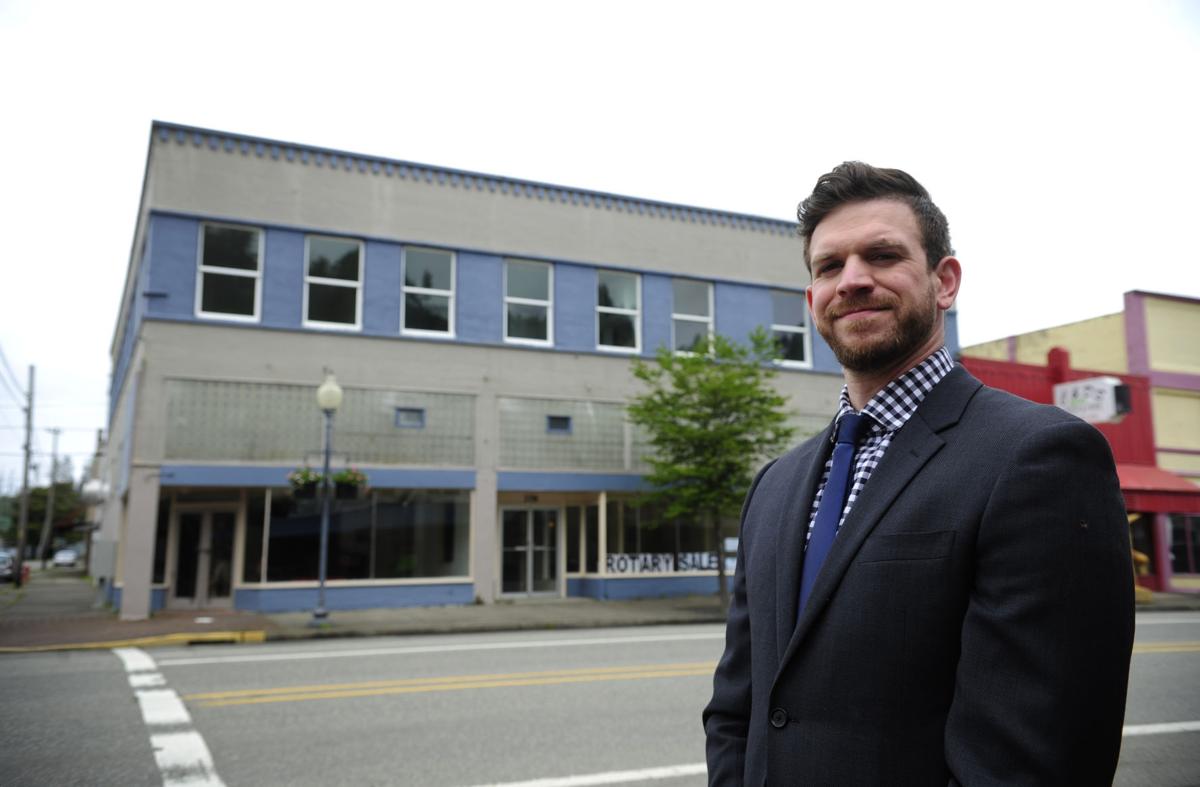 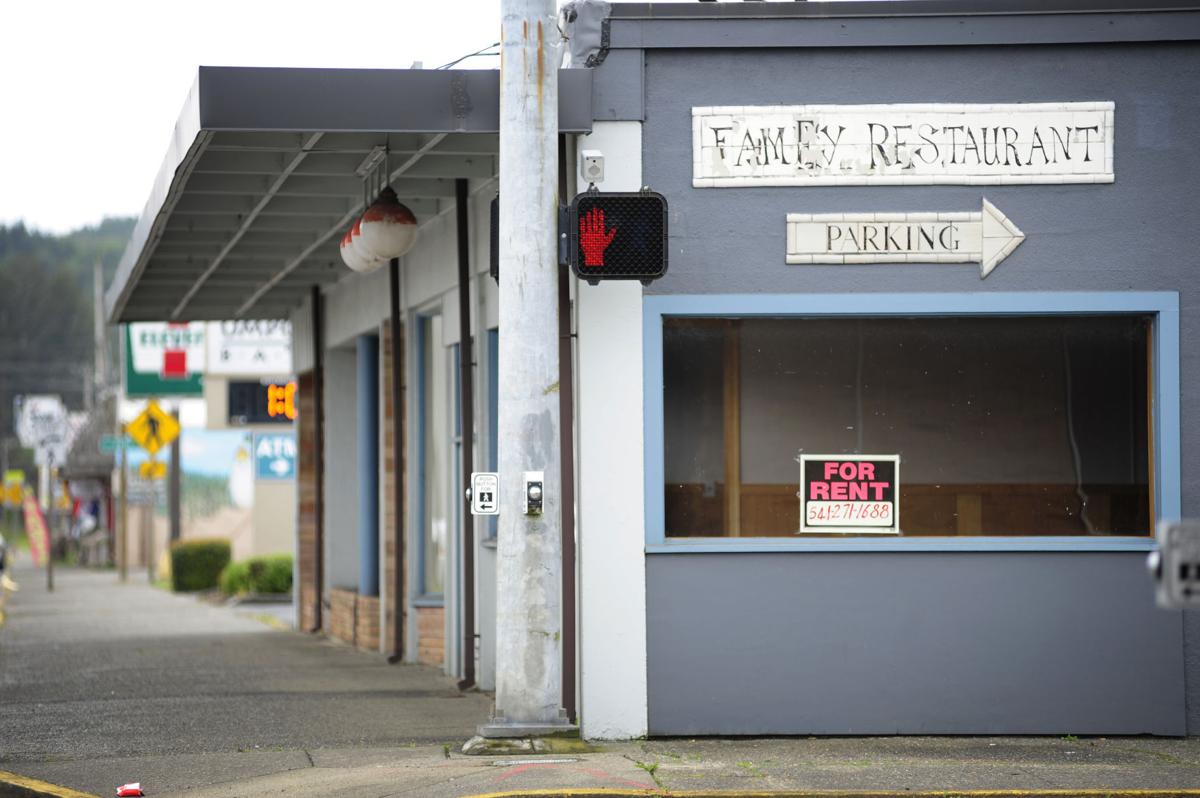 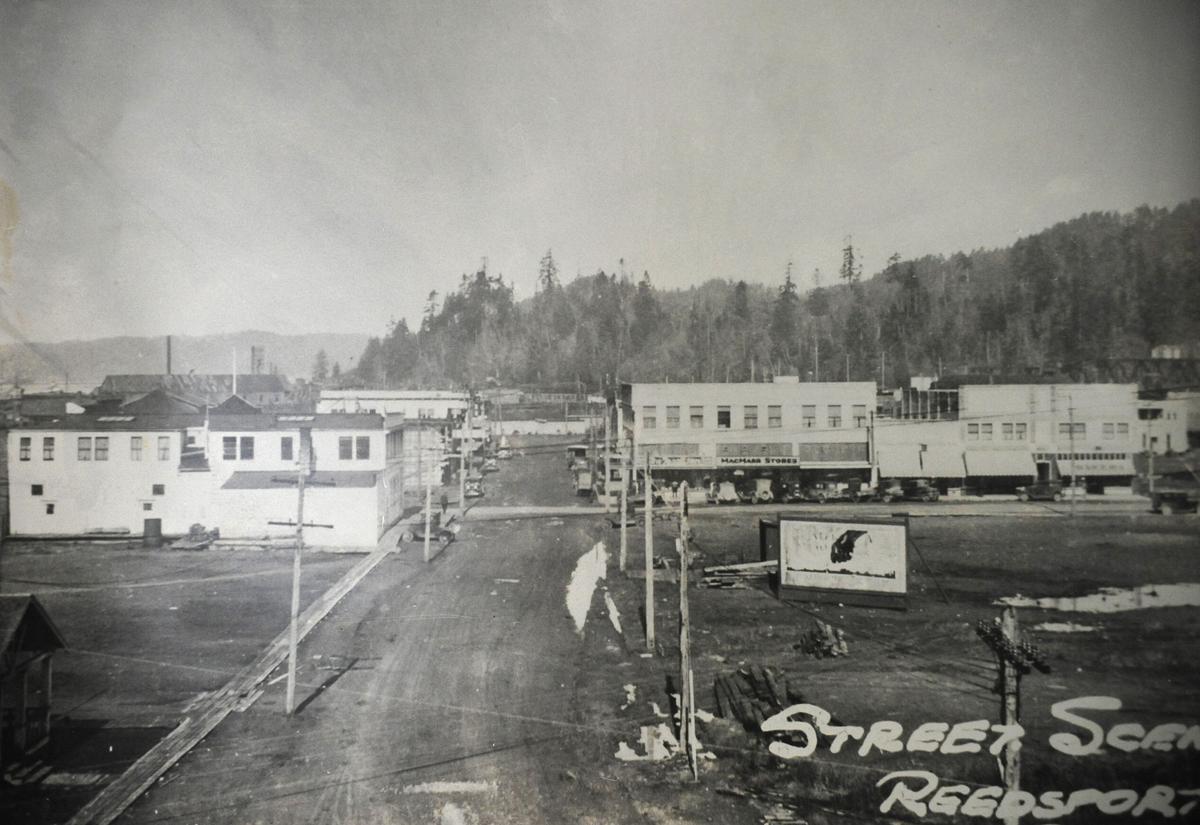 A photo of the Reedsport mainstreet from the early twentieth century hangs in Reedsport city hall.

A photo of the Reedsport mainstreet from the early twentieth century hangs in Reedsport city hall.

For Through The Years owner Lori Dawkins, that's a steal.

She has to come up with a 30 percent match for the Burdick, located at Fourth and Fir.

It's been a struggle, but slowly over time Old Town is seeing more life. Butterfly Effect moved in, plus Defeat River Brewery, Through The Years and the 4 J's Stop & Shop, which sits next to Through The Years.

Still, there has been some confusion among some Highway 101 merchants, who wonder why they can't get some money too for remodeling.

"For this grant, Oregon Main Street members are the ones who apply for it," he said. "The primary ones are downtown."

"The city is really willing to work with businesses to find creative solutions for them to move downtown or anywhere in the community for that matter," Program Coordinator Hesseling emphasized.

"Downtown Reedsport is like a blank canvas. We've been overshadowed by Florence and Coos Bay," Hesseling said.

Projects are critical to Old Town, he noted.

Hesseling assumed the coordinator role from Katie Lockard, who grew up in Reedsport and graduated from the high school there.

Main Street accomplishments in recent years have consisted of:

Still challenges remain in attracting merchants and other building users.

'There's a lot of buildings that could use the money'

Hesseling then decided to count the number of empty storefronts in early March, counting 33, and "approximately 17 are empty."

"We've got a lot of vacancies downtown," he said.

"That was at one time and I think it has changed a little but it's really half," the coordinator said. Since that time, a couple of new businesses are coming in.

Per requirements, there are quarterly and yearly reports to state personnel related to the Burdick Building grant. Hesseling said "there's a lot of buildings that could use the money."

"He'll do a phase and then submit his receipts to us for reimbursement. So it's not a blank check. It's very structured," the program coordinator emphasized.

"It's been in better condition before," Hesseling said. Plans call for seven new apartments at the Burdick Building, which will "really increase the amount of downtown activity whether it's the bakery or the Brewery or MindPower."

A big conversation topic in recent months has been which companies will move into the Reedsport Commerce Park, how many jobs they'll provide, what wages they'll offer and when the firms might come in.

Supporters say once the commerce park kicks in, that will act as a domino effect, bringing in extra business to Old Town.

"I mean any economic development is a benefit to Main Street, especially if people come in and buy a house. It increases the customer base for any downtown business," he said. "Downtowns are the heart, soul and identity of communities and Reedsport is no exception."

"That would be easily eligible for the Diamonds in the Rough Grant," he said, referring to one that's specifically for getting structures on a national registration of historic buildings. This grant is separate from Main Street, but if a business owner is fortunate he can receive up to $20,000 and get his building on the National Register of Historic Places.

The National Register provides a list of the United States's historic places "worthy of preservation," according to the register's website.

The National Register dates back to 1966 with passage of the National Historic Preservation Act of that year, which is "part of a national program to coordinate and support public and private efforts to identify, evaluate, and protect America's historic and archeological resources."

Hesseling took two visitors down a couple of blocks, including next to Defeat River.

Two empty buildings sat side by side, one at 451 Fir Ave. and one at 457 Fir. The asking price is $115,000, which gives the new owner 3,900 square feet of space, the potential of a one-bedroom apartment and alleyway access.

"Where else are you going to get something like that for that price?" he asked.

He looked inside 451 Fir, saying "I mean that's just a huge space."

"This one's going to be fantastic," Hesseling said of the remodeling. "Yeah it should look nice when the façade and awnings are in."

"I think half the battle is getting people to change their thinking," he said. "Little projects can have a pretty big impact. Most of a community's new jobs come from existing businesses and I think that's 80 percent across the country."

Hesseling looked at the big picture and has encouraged others to do so too when it comes to downtown revitalization.

"Revitalizing (structures) to their original glory creates benefits that flow outside toward the rest of the community," he said.

Part of the challenge however is the type of business that moves in.

Hesseling said residents need to bring life to neighborhoods or traditional downtowns, "which have been damaged by disinvestment...." He said strip malls, so-called big-box stores and online retail have hurt downtown. Yet that's not unique to Reedsport.

The view from Old Town itself

Tamara Szalewski has owned Mindpower Gallery with her sister Tara for 28 years.

"I think a lot of it is how we market it and who we cater it too," she said.

"So if someone wants to go fishing, supply them to go do that," the gallery co-owner said. "If they want to go bird watching, where do they find the maps?"

She emphasized that it's hard to find a store in town that offers backpacks for other outdoor enthusiasts.

"So I would fill in all those gaps if it were me," Szalewski said, adding that in early settlements outback suppliers filled a specific need. "Reedsport needs to see itself from an urban perspective and from a big city perspective we are very much the outdoors and the more we understand that, then the better we can market ourselves and cater to that."

The gallery merchant said "the more unique and the more fun it is to walk into your store, that's your market because they'll remember it."

There are a variety of web sites merchants, city leaders and others can peruse for tips on business and downtown renewal but a key one is https://www.nal.usda.gov/ric/downtown-revitalization.

Then there are also empty store fronts along Highway 101. Although some businesses, such as Don's Diner and Bedrocks Pizzeria, have done well over time, other areas sit empty.

Former Reedsport Pharmacy co-owner Leslie McLain managed the business with her husband Jim from 1979 to December 2015. The native Oregonians live now in Winchester Bay and moved to the area in 1976.

"Yeah, when we came the whole town (Reedsport) was full," McLain said. "Fully operational. There were three pharmacies. Sears had an outlet. We had two clothing stores. Several restaurants."

She added however that some still survive to this day, such as Harbor Light and Leona's Sugar Shack. Reedsport had two car dealers -- Jim Vick's Chevrolet and Thompson Ford.

What about moving forward? How can residents best work together with others to fill empty storefronts?

"That's a tough question because business is changing so much," McLain said. "Brick and mortar versus online."

The former business owner spoke of the strength Reedsport and other rural communities possess. McLain said the more "you can spruce up" Reedsport and start independent businesses, "you will attract customers and people will drive to see you." She emphasized this isn't unique to Reedsport.

"It's a function of income and sales," she said. "You have to have the business capital up front to attract people in your doors. It's a real Catch-22."

Part of the situation -- as with any town on the coast -- can't change much and that's the weather. "It's pretty seasonal here. October through April, it's pretty quiet here."

Author Christopher Leinberger, writing for The Brookings Institution in "Turning Around Downtown: Twelve Steps to Revitalization," provided some tips and historical background.

"Determining whether the intention for a long-term effort is present in the community requires the mining of the most important asset a downtown revitalization has: memory and the emotion it unleashes," Leinberger wrote in his March 2005 article. "Emotion is why we create great civic structures, such as city halls, performance halls, arenas and museums. Emotion is the reason great historic buildings are renovated, even though the cost of renovation is usually greater than tearing down and building a new building."

"Contrary to evocative memories of downtowns past, however, is the reality of the great suburban land rush, starting in the 1950s, which led to the disinvestment in our downtowns in the first place," he wrote.

Some in Reedsport who are 60 or older have quite fond memories of what Reedsport used to be like. The town's not unique by any means as The Brookings Institute author points out.

"Downtown in the afterglow of World War II was 'where all the lights were bright,' where first dates occurred, where parents worked and parades were held. The downtowns of this era were where you went for the fancy department stores and to see tall buildings," the author wrote. "It was where the sidewalks were jammed with people, unlike any other place in the region."