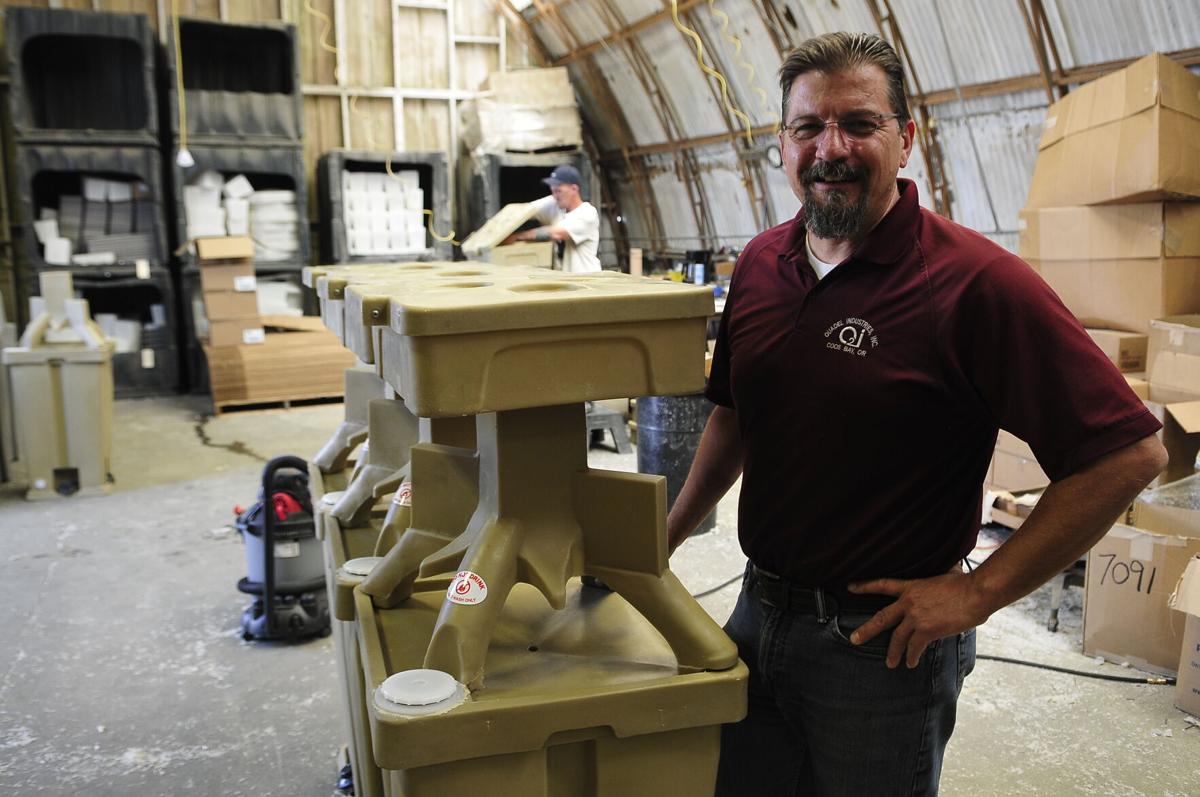 Quadel Industries owner Eric Luckman stands next to one of the new hand washing stations being produced by the Coos Bay company. 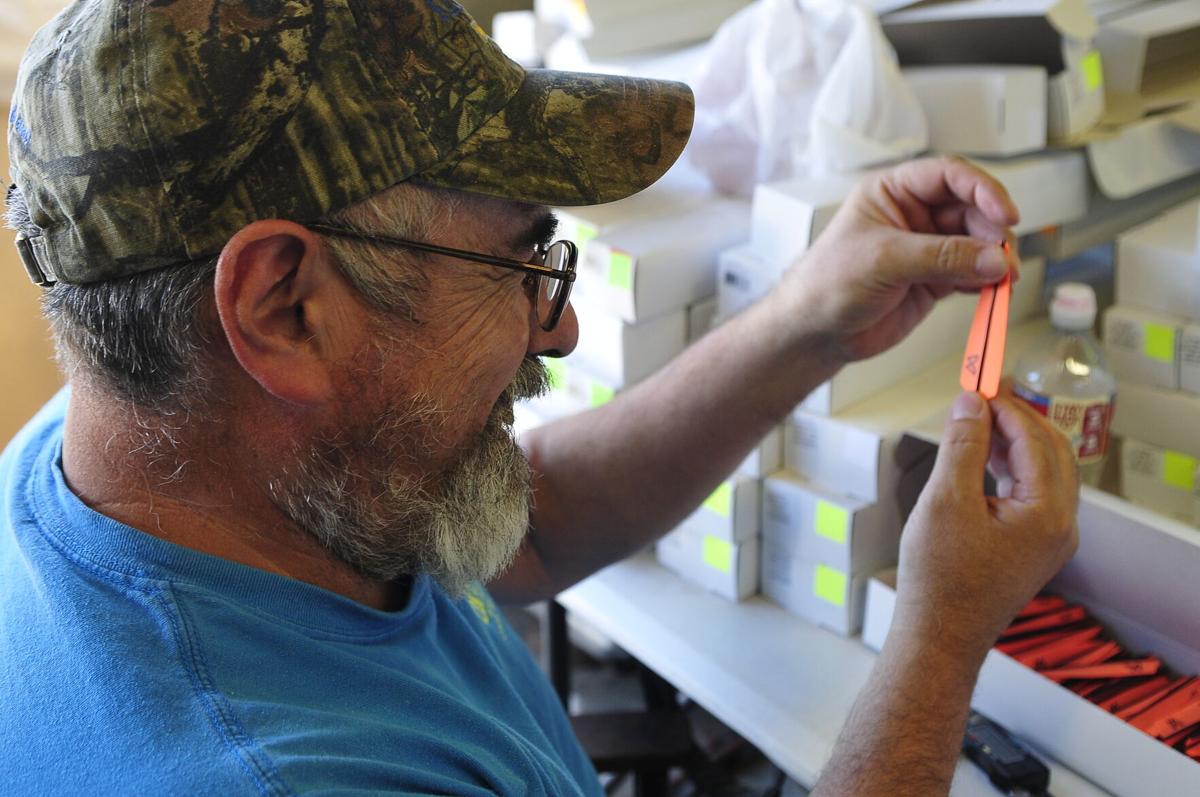 Gilberto Lopez inspects arrow fletchings at Quadel Industries to make sure they are of sufficient quality. 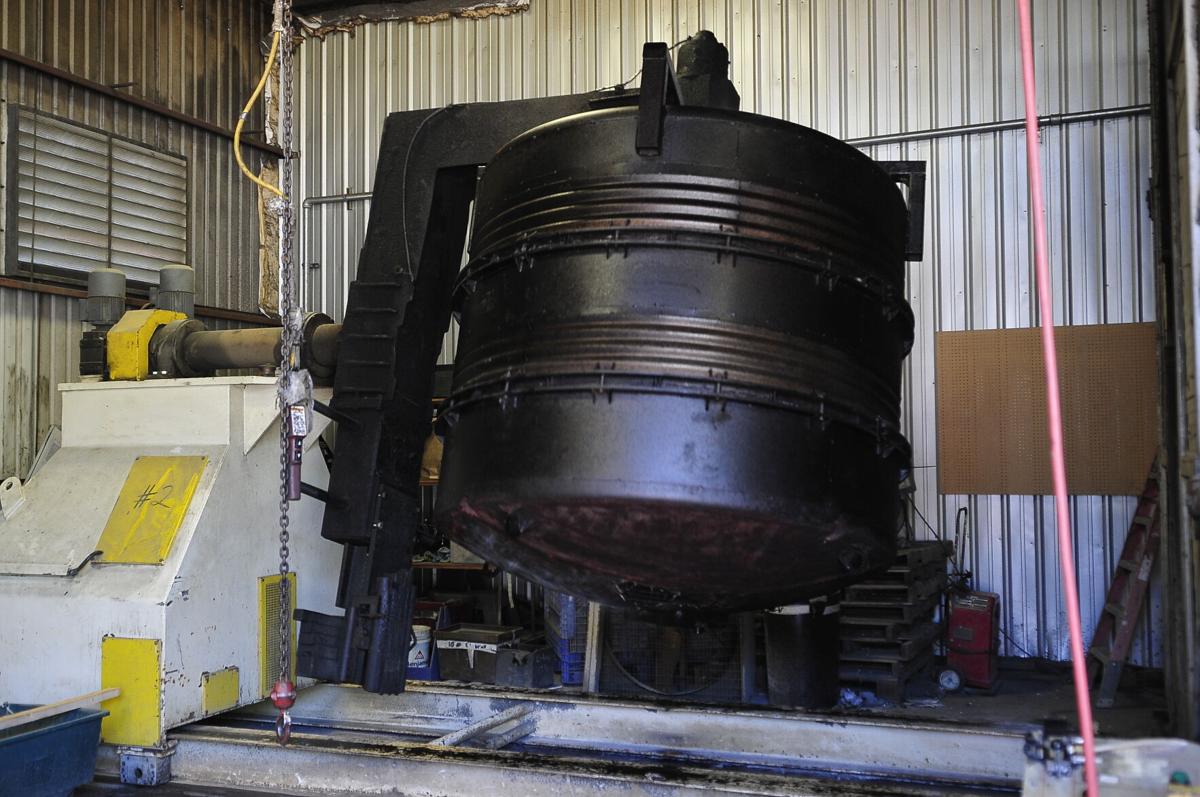 A huge form is used to create a water tank at Quadel Industries. 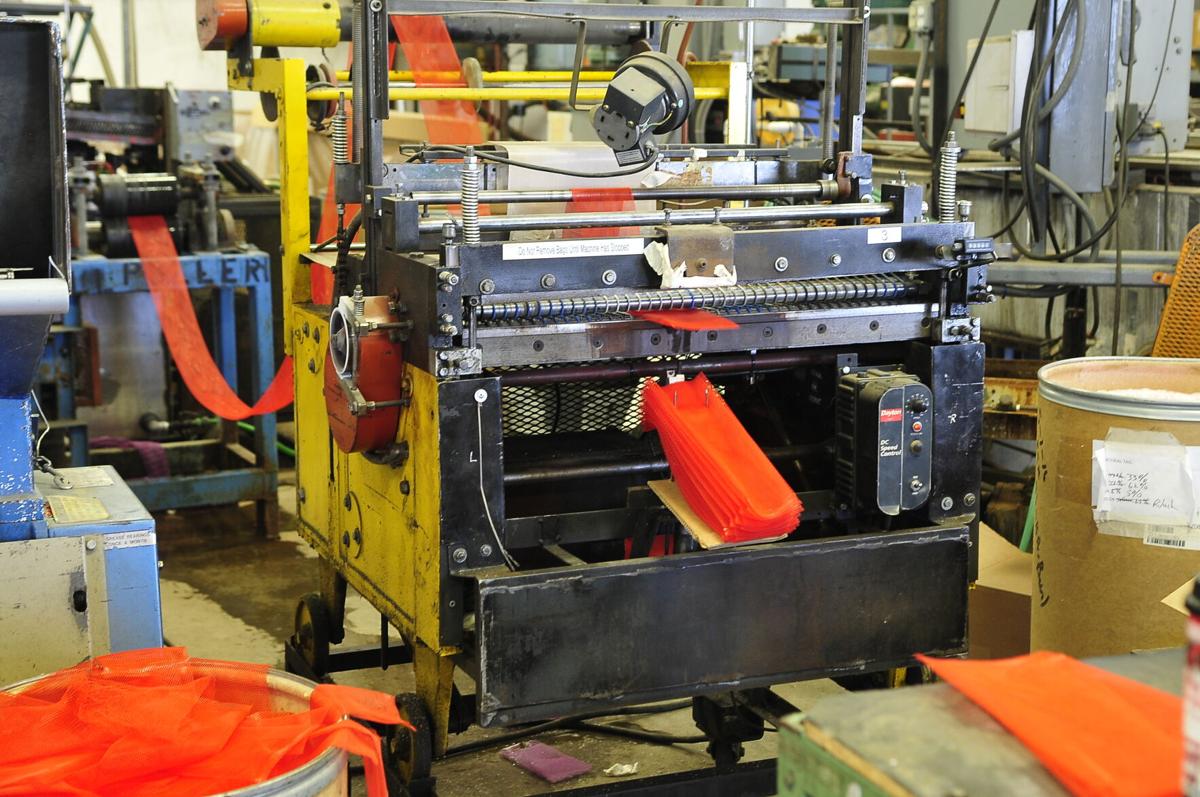 Mesh webbing comes out of a machine at Quadel Industries. 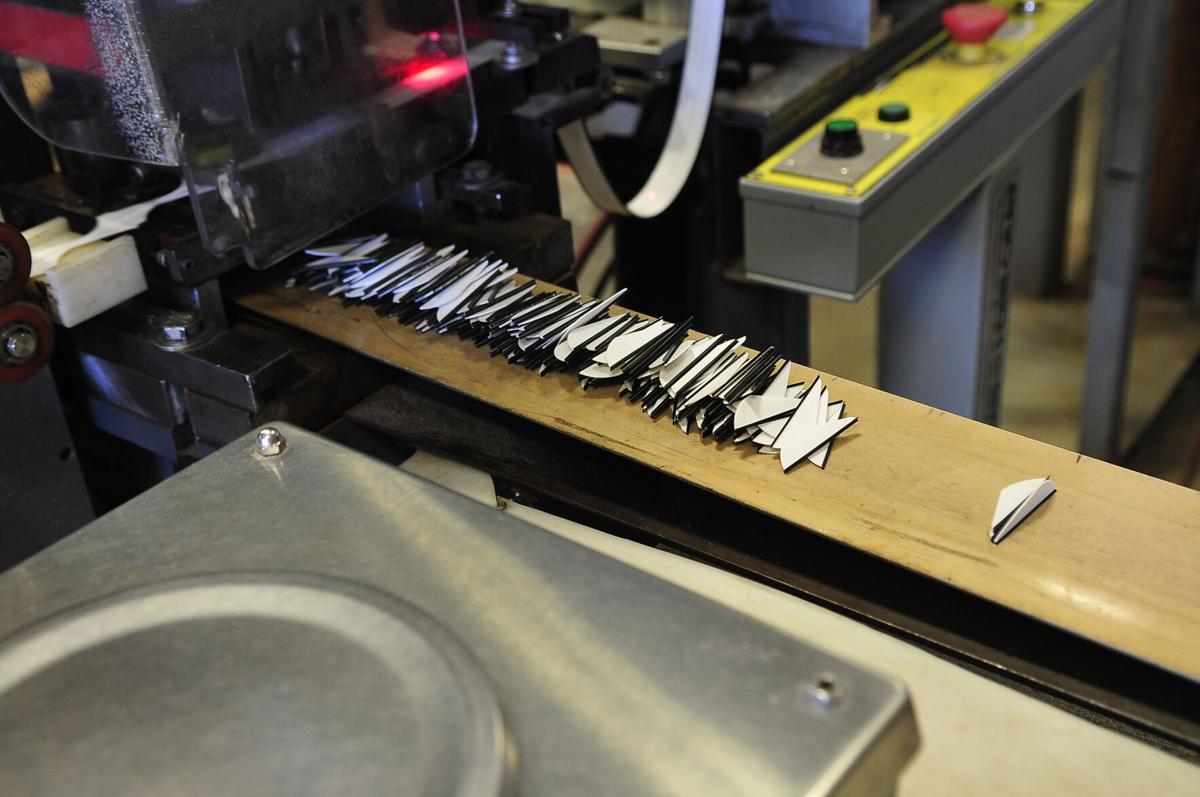 Arrow fletchings come off a machine at Quadel Industries.

Quadel Industries owner Eric Luckman stands next to one of the new hand washing stations being produced by the Coos Bay company.

Gilberto Lopez inspects arrow fletchings at Quadel Industries to make sure they are of sufficient quality.

A huge form is used to create a water tank at Quadel Industries.

Mesh webbing comes out of a machine at Quadel Industries.

Arrow fletchings come off a machine at Quadel Industries.

COOS BAY — The COVID-19 pandemic hit a lot of businesses across the country hard. It has the opposite effect on Quadel Industries.

The Coos Bay company that manufactures many different types of products with plastics was actually able to expand one of its lines of production making a product suddenly in demand — portable hand washing stations.

“We’re very diverse in hundreds of different markets,” said Eric Luckman, who runs the company. “If we have a market that goes down, we can focus on another product,” he said.

That certainly became the case with the hand washing stations — the company is selling many of them to the Defense Department and other organizations and has a backlog that will keep it busy a ways into the future.

“We were already making them, just not at the volume we are now,” Luckman said.

The company makes the washing stations in three different sizes, including with two foot pedals or four.

“We talked as a management team,” Luckman said of the early stages of the pandemic. “We figured we were going to have a lull in some areas. We shifted all our sales force into the hand-washing stations.

“It took about a week and then the floodgates opened.”

In the past few months, Quadel Industries has made thousands of the stations, including to Boeing and Disney World.

In a time when many companies were laying people off, Luckman has increased his workforce to help meet the demand.

Quadel Industries is making much, much more than just hand-washing stations.

The hand washing stations include five different pieces of plastic that are molded at the Coos Bay production center. The company has to bring in the foot pumps and the soap dispensers, but adds them to the other parts for the complete products, which are then shipped out.

Not far from where the different parts of the washing stations are being molded, several other products also are made, including huge plastic water tanks in sizes of 1,500 or 2,500 gallons and smaller plastic pallets that are used by grocery stores for displaying products.

All of those products are made through rotational molding, starting with plastic powder — the company goes through some 40,000 pounds of the powder a week.

In a separate building, the extrusion process is used for smaller, but no less popular, products, including mesh netting that is used for items like flower balls, turkeys in stores, tree sapling protectors or oil boom netting.

“Only a handful of companies in the country do extrusion,” Luckman said.

The greatest volume of anything Quadel Industries makes, in term of numbers, is also in the extrusion department in arrow fletchings.

Most of the fletchings are sent directly to arrow manufacturers all over the world — on six different continents in boxes of 15,000 at a time (about 90 of those boxes were awaiting shipping on one day this week).

The company also sells its fletchings to sporting goods stores, where they can be purchased directly by the public — a rarity for Quadel Industry’s products.

“The reason most people don’t know we’re here is we don’t do much local business at all,” Luckman said.

The tiny arrow fletchings are an example of the precision of what Quadel Industries does.

Five different materials are mixed in precise ratios to make the veins and lasers are used to ensure the plastic forms at the right consistency, including measuring the width of the veins to a thousandth of an inch.

Similar precision is used in making the mesh netting, with the netting made to specific sizes, died to specific colors and cut to specific lengths, depending on the purpose.

Everything Quadel Industries makes now is a big expansion over the origins of the company, which was started by Luckman’s Parents, Everett “Lucky” and Lorraine Luckman, and his uncle and aunt, Rockne and Trish Luckman, back in 1984.

“All there was was one Quonset hut,” Luckman said. “They were making water tanks and septic tanks and portable toilets.”

Luckman’s uncle died in 1985 and his aunt sold her share of the business to his parents. They purchased Forest Protection Products a few years later and started making the mesh netting to protect seedlings as a way to expand the business and provide year-round work — the season for water and septic tanks is generally spring to late fall and the season for protective mesh netting is fall to spring.

Luckman moved away after graduating from high school, but he and his wife Connie moved back in 1993 and eventually he and Connie took over the company from his parents. Eventually, they may pass it on to one of their four children.

The company has expanded its product line vastly over the years, including making some custom products for other companies as well as its own products.

Luckman takes pride in the success of Quadel Industries and how it ships its products worldwide, especially when so many other products are imported.

“I get a lot of enjoyment out of saying that,” he said. “When you can say you’ve got US manufacturing going to all those places, especially out of little Coos Bay, Oregon, I’m proud of that.”

Because Quadel Industries is relatively small, the company strives for better customer service and delivery times.

And Luckman is always looking for new products to manufacture.

“We can make anything,” he said. “It’s whether you can market and sell it. You do research and all your due diligence and try to sell a product.”

Some have been successful, others haven’t.

“Hopefully in the end you have more successes than failures,” Luckman said. “We’ve been pretty fortunate.”