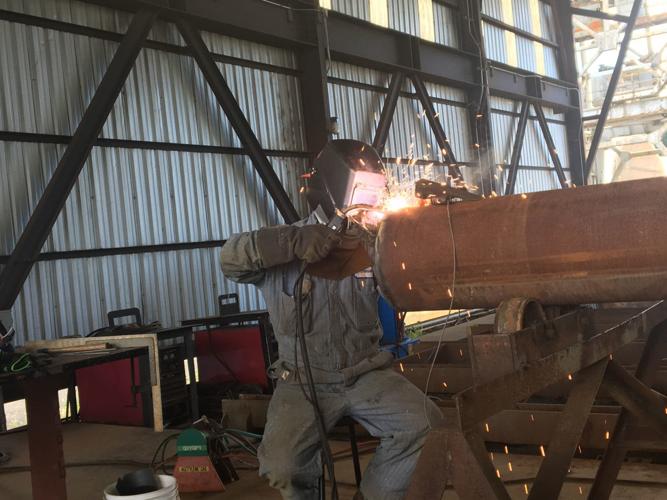 Marshfield graduate Daniel Morris is a year into his welding internship with Sause Brothers. 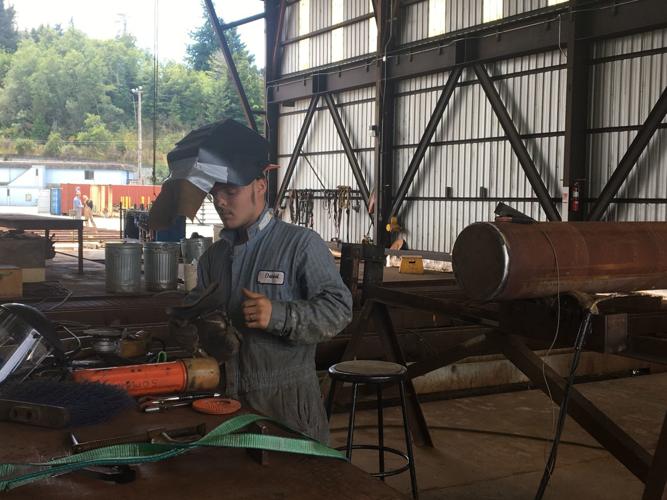 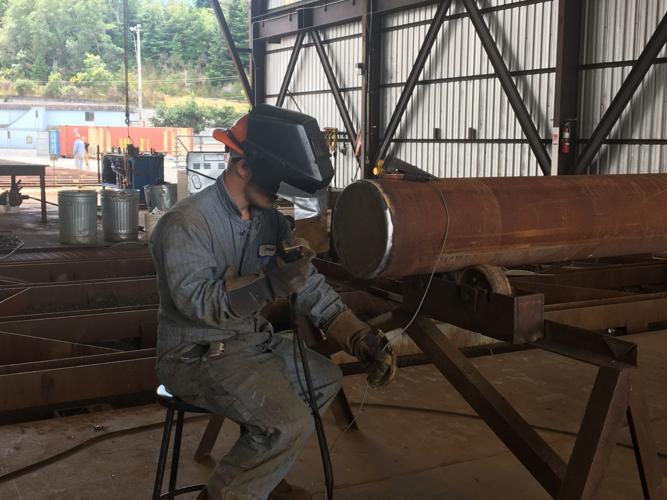 Daniel Morris has interned with Sause Brothers as a welder for a year now while seeking a welding certificate from South Western Community College at the same time.

Marshfield graduate Daniel Morris is a year into his welding internship with Sause Brothers.

Daniel Morris has interned with Sause Brothers as a welder for a year now while seeking a welding certificate from South Western Community College at the same time.

COOS BAY — Last year Sause Brothers opened up an internship program to find welders from local high school programs in an effort to bring in young talented welders to train and replace its aging workforce.

Of the three who accepted this internship, Daniel Morris from Marshfield is the only one who continues to learn new welding and fitting skills every day with Sause Bros.

By Morris’ own account, he wasn’t interested in much in school, but found a way to use skills his father taught him, and even pick up some new ones in Marshfield’s manufacturing class.

“My dad’s been a master manufacturer most of his life, and I like to think I took on some of that,” Morris said. “I knew that in school I had to get into something if I wanted to succeed, so I joined the manufacturing program.

In high school Morris received an award for being the best stick welder in Marshfield’s manufacturing program.

Marshfield manufacturing teacher Glen Crook served as a mentor in school for Morris, and even helped him find his way to the internship at Sause Bros.

“Mr. Crook told me that Sause Bros. had an internship for a few people who were legitimately interested in the role of a welder fitter… When graduation came, I had no Idea, but they announced that I had been accepted into the internship,” Morris said.

Morris feels very grateful for the opportunity that Sause Bors. has given him, recognizing how difficult it can be for young people to find a solid career.

“I’m aware that it’s becoming harder and harder for younger people either going into college or just getting out of it to find work, and I thank Sause Bros. so much considering me for this role. If they didn’t accept my resume I don’t know where I’d be right now,” Morris said.

Sause Bros. sees the internship program as an opportunity to bring young enthusiastic folks into the industries that drive the local economy.

“These investments have a significant impact in the maritime and manufacturing industries that are so crucial to our local economy. We have to continue to engage and work with the community to form lasting partnerships,” said Caitlin Sause, vice president of government and public affairs at Sause Bros.

Morris works part-time at Sause Bros. for now, while going to school at Southwestern Oregon Community College to earn a two-year certification in welding and manufacturing.

“The point is for the skills to be transferable so that workers can work consistently and make a living for their families.” Sause said.

Morris said that the things he’s learned on the job welding at Sause Bros. have been more valuable to hone his skills than any other training he’s received.

“I’ve learned a lot. The stuff they teach in school gets you into the idea for what you’re going to be doing, but until you get out here you don’t realize how much there is to know. There’s a lot of old knowledge. Experienced welders and fitters that have been here for a long time,” Morris said.

Some of the difficult things Morris notes as things he could only learn on the job are things like learn how cranes are operating above and being mindful of that, and learning how to safely work on things from a distance.

“I had a hard time adjusting to welding completely out of position, and I’m still working on it,” Morris said.

Morris said his favorite part about his job at Sause Bros. is knowing that the things he works on are going to be used for something.

“These programs provide the entire industry with marketable and motivated workers,” Sause said.

According to Sause Bros., the welding internship program did not open to any new applicants this year, because the company was busy on other projects, but they do hope to open it back up in the future and take on training more young manufacturers.

'It's a great time to be on the South Coast'

Eastside School to be finished summer of 2020

What steps have you taken to prepare for wildfire season?