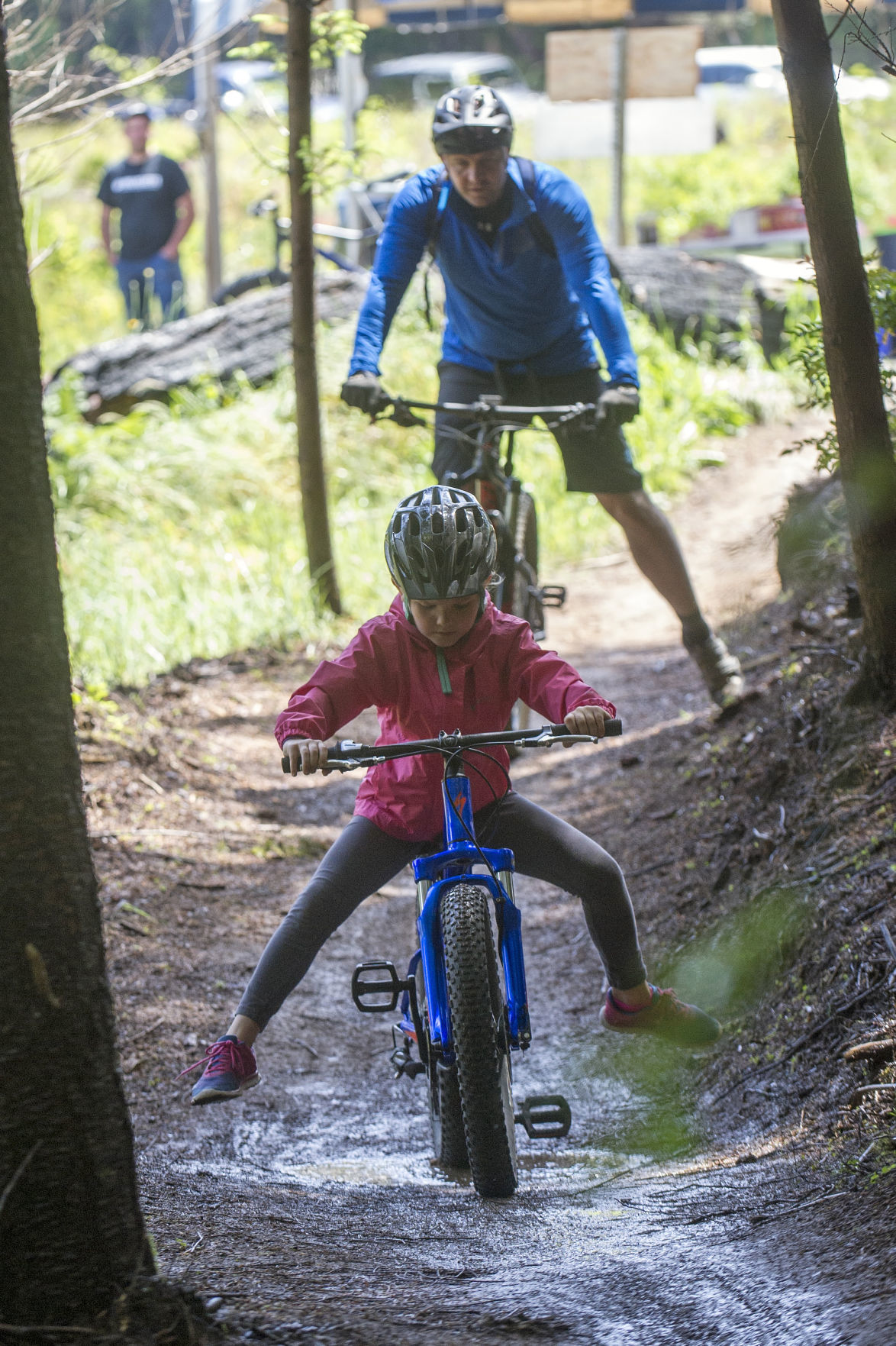 A young cyclist splashes through a puddle on a guided ride of the Whiskey Run Trails during the inaugural Whiskey Run Mountain Bike Festival north of Bandon on June 6. 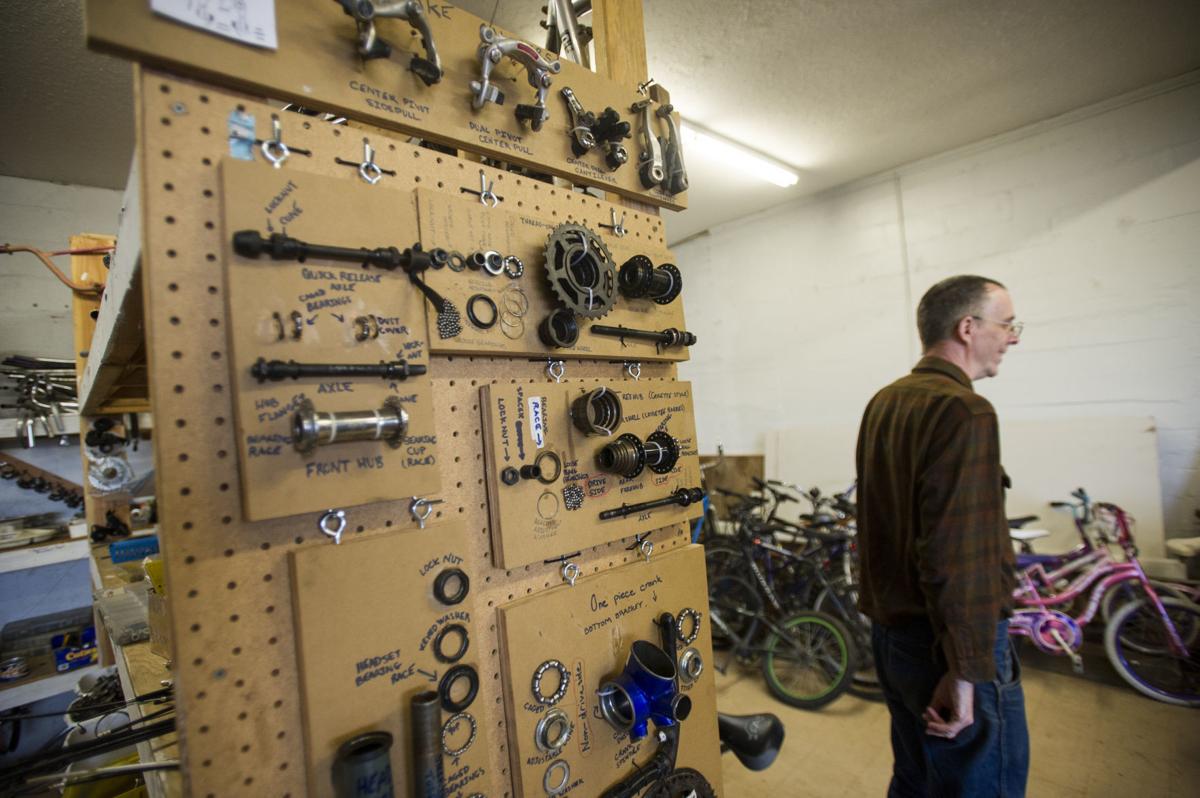 Bicycle parts are displayed and label for reference at the volunteer operated Front Street Community Bike Works in Coos Bay on June 7. 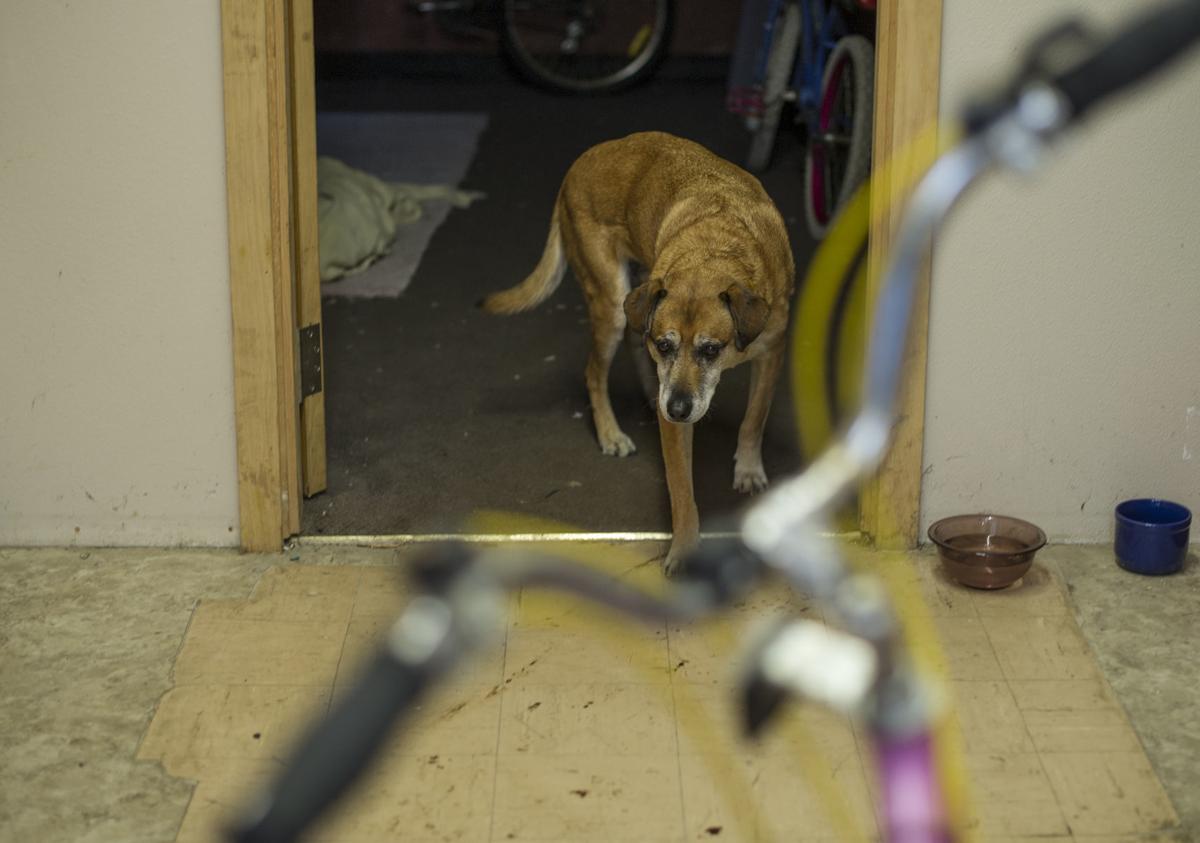 A shop dog hangs out at Front Street Community Bike Works in Coos Bay on June 7. 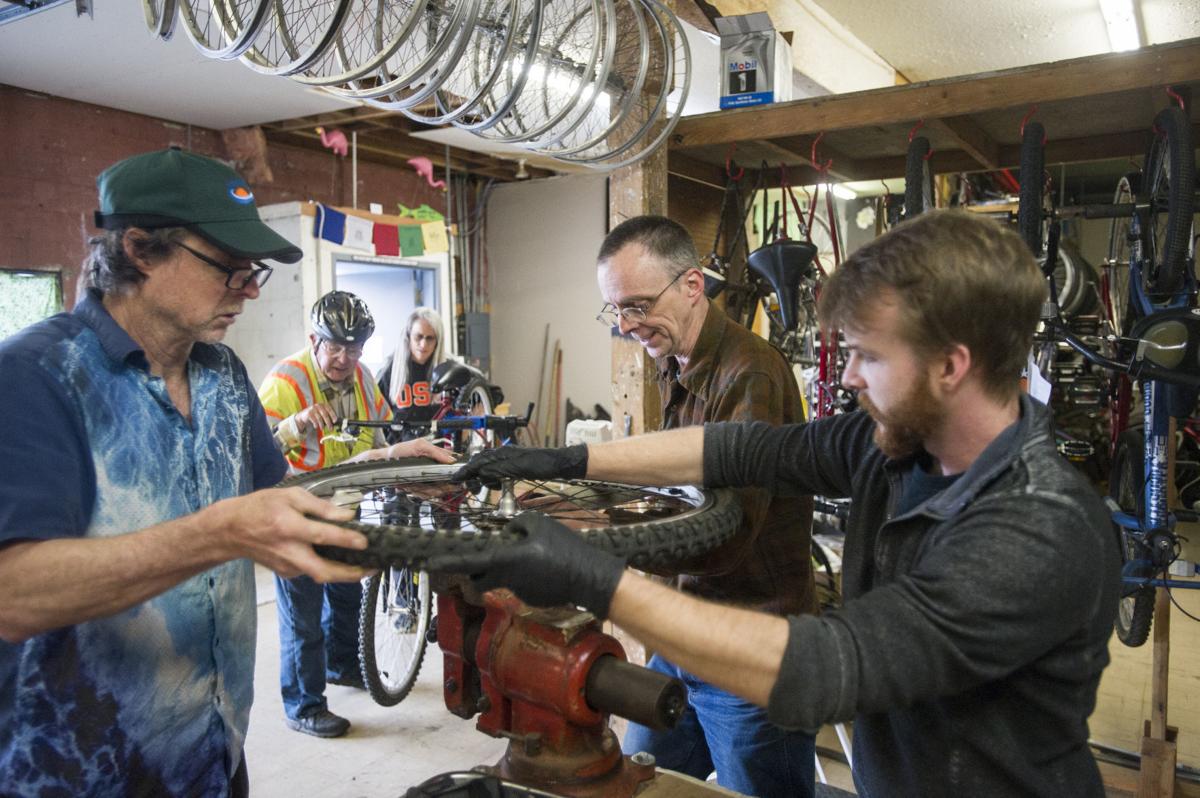 Volunteers work on a wheel at Front Street Community Bike Works in C0oos Bay on June 7.

A young cyclist splashes through a puddle on a guided ride of the Whiskey Run Trails during the inaugural Whiskey Run Mountain Bike Festival north of Bandon on June 6.

Bicycle parts are displayed and label for reference at the volunteer operated Front Street Community Bike Works in Coos Bay on June 7.

A shop dog hangs out at Front Street Community Bike Works in Coos Bay on June 7.

Volunteers work on a wheel at Front Street Community Bike Works in C0oos Bay on June 7.

Coos County is  located along a premiere cycling route that thousands, from all over, travel each year.

The South Coast is slowly becoming a destination for cyclists to stop, fix their bikes and maybe even enjoy some trails.

Much of the biking infrastructure on the South Coast, whether it’s through one of the cities or out on U.S. Highway 101, could use some help.

The Oregon Department of Transportation noticed this and is currently working on improving cycling infrastructure along Highway 101 to accommodate bicyclists.

In the next three years, ODOT plans to revitalize the 370 mile-long Oregon Coast Bike Route, which was designated in the 1980s, and hasn’t seen any updates in over a decade.

“We’re looking at not only the route itself, but how people are able to connect with the communities along the OCBR,” Jenna Marmon with ODOT said.

Marmon said that the feedback she’s received from cyclists on the route calls for better access to campgrounds, restaurants and farmers markets — all things available on the South Coast.

“The thing that will come out of this planning effort will be identification things like gaps in bike lanes and areas without a shoulder lane, and then we’ll come up with a list of project needs,” Marmon said.

Within the next year, there will be a number of public meetings ODOT will be holding along coastal communities to get citizen input on how to make the OCBR a more friendly place for cyclists.

“We’re in the early phases of the project right now, the work that’s been done so far is just a user survey that has been done by OCBR tourists … we’re really in the fact finding phase right now,” Marmon said.

Soon enough, ODOT hopes to release a map where cyclists can go in and make notes about difficulties they’ve had on certain stretches of the bike route.

“There are definitely some gaps in the bike facilities in the area, and the environment is not super comfortable right now. There is some really nice biking in the area but it’s all about connecting the dots,” Marmon said.

Areal communities have also begun to embrace cyclists on the South Coast, whether they’re tourists or locals. Businesses like 7 Devils Brewing Company and Bayside Coffee offer bike racks to lock up bikes, as well as tools and other resources that are available for cyclists to use.

Both 7 Devils and Bay Side Coffee have custom bike racks made by local welders. The racks at 7 Devils were made by metal worker and sculptor Mike Vaughan.

Bayside Coffee and 7 Devils are also both part of Travel Oregon’s Bike Friendly Business program. Bike friendly businesses must meet a minimum requirement with Travel Oregon, at which point they can buy a custom sign that shows cyclists all the different resources available at their bike stop.

Few businesses around are as bike friendly as 7 Devils, which encourages its employees to walk, run, or bike to work. The business also has begun doing bicycle deliveries.

“We have a custom made delivery bike that’s a three-wheeled sidecar bike. You’ll see our delivery guy riding around. That bike was custom made by a local guy named Bryan Duggan … We do an incentive program with our employees to run, walk, or bike to work. Because we have a shower here we’re able to allow our employees the ability to exercise on their way to work, or after work, and use our facilities,” one of 7 Devils’ owners Carmen Matthews said.

One of the more peculiar ways 7 Devils supports cycling is with its bicycle grain mill.

“We use it every once in a while for small batches and our community beer that we usually make. You actually pedal to grind the grain. We don’t use it all the time, but for special occasions we break it out and have people pedal and earn credit for beer or food,” Matthews said.

In the future, Matthews has said he’d like to work with Front Street Community Bike Works to put on cycling events in the community.

Front Street Community Bike Works is a new bike shop in the area that just a few weeks ago had a Rock and Roll Bike Bash where over 100 cyclists, both young and old came out to ride bikes and listen to music.

“We did everything by donation for the party, and we didn’t charge much for food or drinks. So we pretty much broke even on that, but we sold a few bikes and made some money off of the bike sales,” co-founder of Front Street Community Bike Works Cheryl Davies said.

The party began as an opportunity for the bike shop to showcase what it was all about. Unexpectedly, a large number of people wanted to come and see the new shop.

“It all just sort of built on itself and turned into a big party … It was impressive to see we had a lot of people here. Just in general the community has been really supportive and seemingly excited about what we’ve been doing here,” co-founder Eric Clough said.

The shop is run by people who volunteer their time and energy to help promote bicycling.

Front Street Community Bike Works caters to anyone who would like to come in and work on their bike. Shop time by donation, and someone is always there to help walk people through the work that needs to be done to get their bikes moving again.

“I think people appreciate the fact that they can come in and work on bikes,” Clough said.

Some long term goals of the shop are to earn status as a nonprofit organization, and to make a donation to an international bike aid project in Guatemala called Maya Pedal.

“We would like to pull together the resources to send a shipment of bikes and bike parts to them that are surplus stuff for us. There is a surplus of bicycles in the community that can help other people who would like to have them,” Clough said.

On occasion, Front Street Community Bike Works will get tourists riding along Highway 101 in the shop to work on their bikes before getting back on the road.

“Most of the people who come in off of the highway are Warm Showers people. They see us on Facebook, and they’ll come in and work on their bikes, then usually leave little donation and they're off,” Davies said.

Warm Showers is a hospitality app for cyclists to seek out places to stay and get a warm shower when riding cross country.

The South Coast cycling community wants to be a destination for cyclists, and it is making it happen by using its location along the OCBR to incentivize cyclists to come off the beaten path to explore some truly beautiful biking opportunities.

Super Sunday -- Test yourself with our Big Game Trivia Quiz!