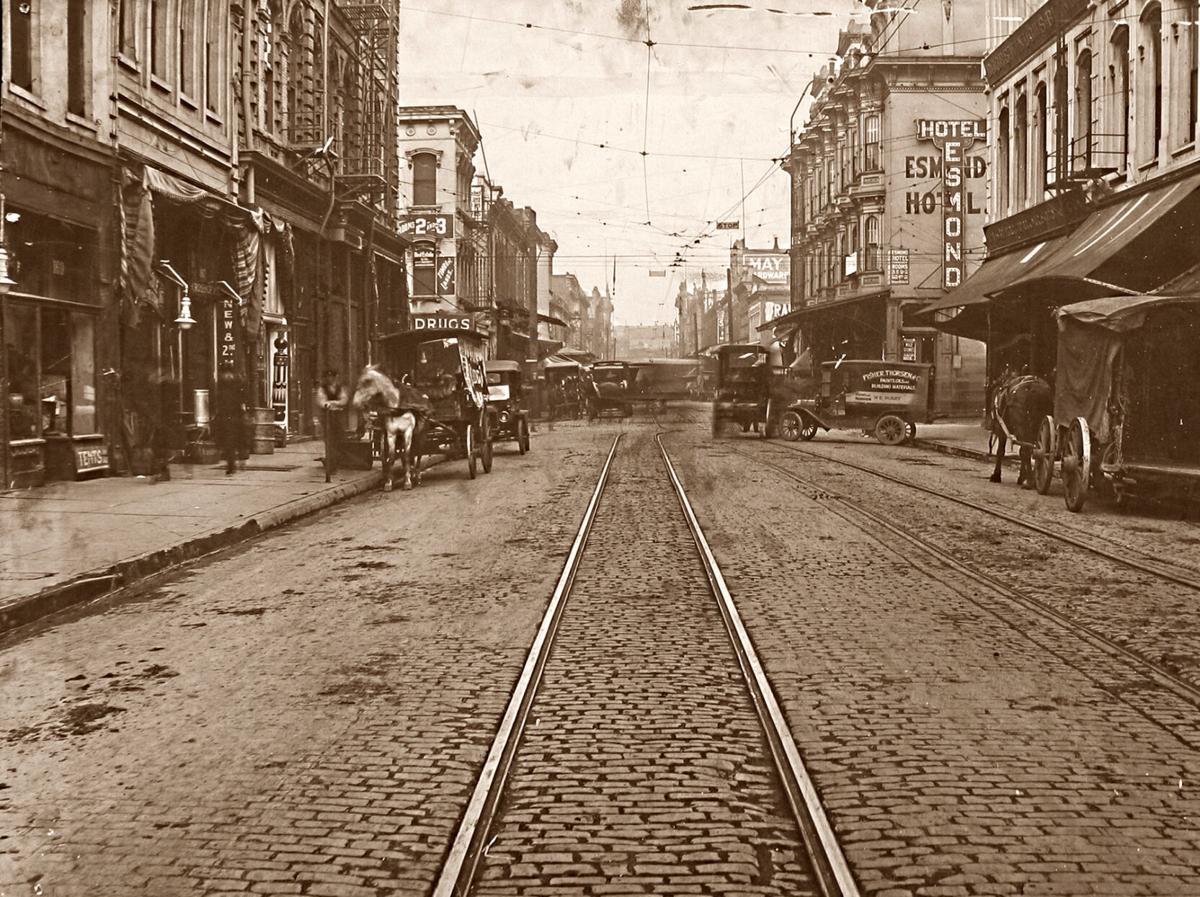 A view along Front Street of the Esmond Hotel as it appeared about 20 years after President Rutherford B. Hayes stayed in it. Rabbi May’s gunfight took place just below one of those balcony windows on the second floor, probably the fourth one back. (Image: Dave Kramer/ vintageportland.wordpress.com) 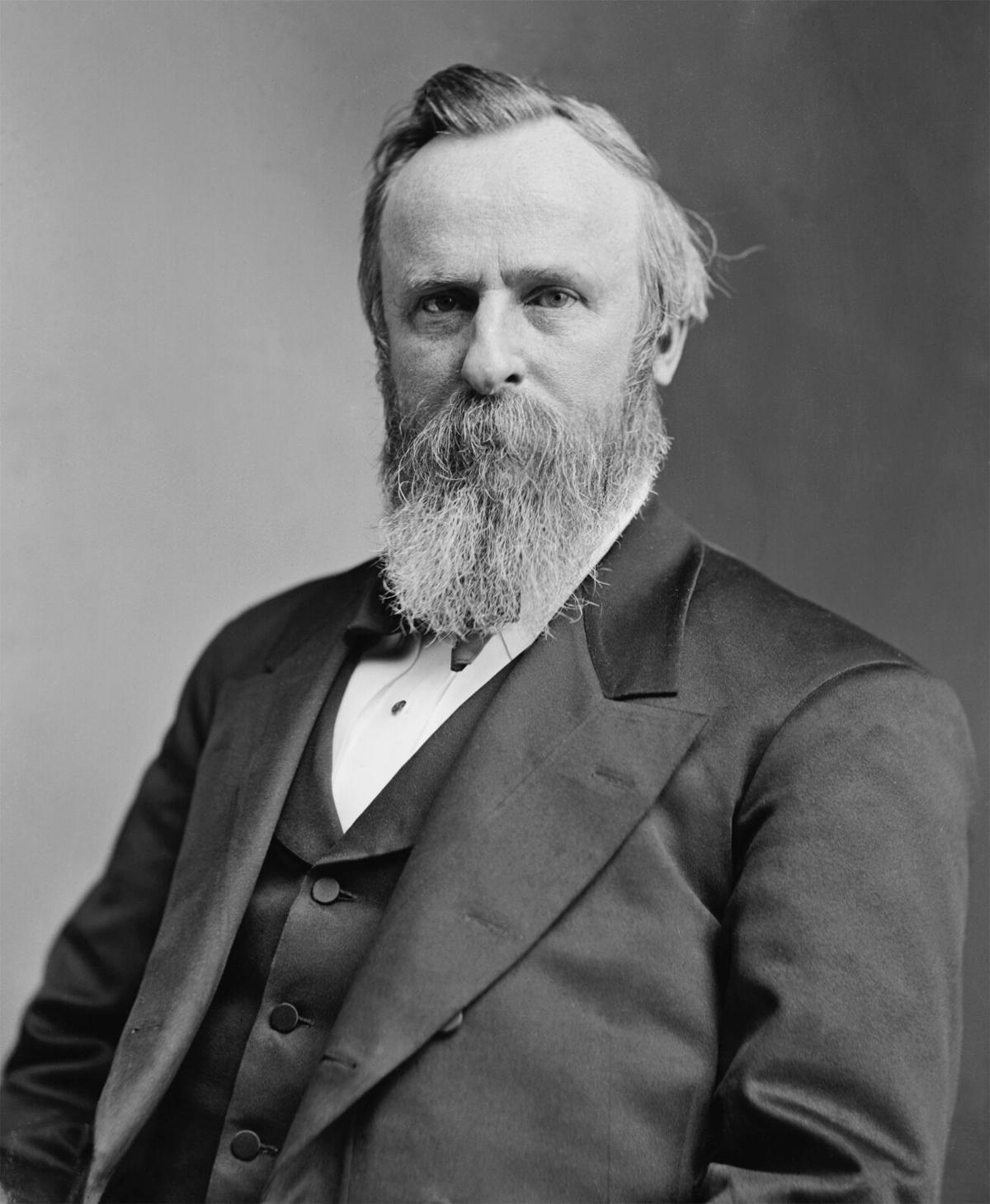 President Rutherford B. Hayes as he appeared in 1880, when he visited Oregon and may have witnessed Rabbi Moses May’s gunfight from his hotel window. (Image: Library of Congress)

For the first time in the history of the city or the state, a sitting President of the United States had come to visit. President Rutherford B. Hayes had arrived in Portland the night before and was staying in the Esmond Hotel, the nicest in Portland at the time, on the corner of Morrison and Front streets.

Portland was, of course, very much a frontier town in 1880, still dotted with the stumps of the trees that had been cleared to make room for it. So it can’t have come as too much of a surprise to the president when, at 9:30 the next morning, a gunfight broke out directly beneath his hotel window.

He was probably a little more surprised, though, when he found out who the gunfighters were: It was the president of the local synagogue — and the rabbi.

CONGREGATION BETH ISRAEL is the oldest Jewish congregation in Oregon. It started out in 1858 with eight members meeting in a garret over a blacksmith’s shop.

Like Portland itself, it grew fast. By 1880, it had a proper synagogue building at Fifth and Oak, and a sizable membership.

But also like Portland, it still had some growing pains to get through.

One of these was the problem with finding and keeping a rabbi. Portland, at that time, was a jumping-off town, very nearly as close to the edge of civilization as one could get. The congregation had some difficulty finding a rabbi who would move so far away to accept a $1,000-a-year salary.

But the congregation’s rabbi troubles probably stemmed not so much from their remoteness and low pay, as from the other big challenge. Beth Israel was a congregation made almost entirely of immigrants from various other parts of the world, and each member wanted the synagogue to continue using the siddur (prayer book) and general style of Judaism practiced in his or her home country.

The Orthodox believers (Minhag Polin and Minhag Ashkenaz) were resisting this trend fairly fiercely. And, obviously, the question of who was Rabbi was a pretty important part of the struggle.

In the early 1870s the Reform members won a majority on the board of directors and fired the Orthodox rabbi, Dr. Isaac Schwab. In his place they elevated a young minister named Moses May.

Rabbi May proposed immediately to drop the Minhag Ashkenaz, which Beth Israel was using at the time, and replace it with the Minhag America, which Reform Rabbi Isaac Mayer Wise of Albany, N.Y., had created in 1857 in hopes it would help unify American Jews.

In Portland it did not have any such effect. Almost immediately upon May’s arrival, the Orthodox Minhag Polin adherents split from the synagogue and formed their own congregation, called Ahavai Sholom (“Lovers of Peace”).

The Orthodox congregants who favored the Minhag Ashkenaz, however, stayed in Beth Israel and fought back.

They did this with a campaign to get rid of Rabbi May. They complained to Beth Israel’s Board of Directors, accusing him, as author I. Harold Sharfman reports, of “referring to the married women of his congregation as ladies of easy virtue; casting aspersions upon his own wife in public; outrageously slandering and blackmailing several members of the Congregation; condemning himself, by his own actions, as an immoral man and an unbeliever in the doctrines of Holy Writ; acting as a libertine and rake during a visit to San Francisco; calling the officers and members of the Congregation outlandish names; threatening to join the Unitarian Church in the event Mr. Philip Selling (an Orthodox congregant) were re-elected President; opening mail belonging to others for the purpose of slandering the authors of the letters; and when he was called a liar, blackguard, scoundrel and villain, he offered no word for his defense but walked away and therefore gave rise to the belief that he felt himself guilty of these charges.”

The board investigated and absolved May of all charges. But the adventure got May’s blood up, and he was now determined that Beth Israel was going to convert to Minhag America, whether the Orthodox members liked it or not.

It became official in 1879, the year before Oregon’s first (and hopefully only) Rabbinical gunfight. By then, a business owner and Orthodox congregant named A. Waldman had been elected President of Beth Israel.

WALDMAN AND MAY had been cordial enemies ever since May first came to Portland in 1872 to be Beth Israel’s rabbi. But during the days before the gunfight, relations between the two had become really sour. In his yearly report on the Sunday school of which he served as secretary, Waldman had written, “The progress of our school would have been more encouraging but for the ungentlemanly conduct of Rabbi May toward both scholars and teachers.”

May, incensed, had gone to Waldman’s clothing store, stationed himself in front of the door, and shouted, “You’re a liar!” into it. Waldman had shot back that he couldn’t do it in the store, but at his very next opportunity he would beat May up.

And apparently Waldman’s very next opportunity came along at 9:30 the next morning, on the street directly beneath the hotel suite occupied by the President of the United States.

AT THAT FATEFUL HOUR, Rabbi May was standing in the street conversing with a friend when President Waldman approached him from behind and, without warning, seized his coat, spun him around, and smashed his glasses against his face with two full-powered punches.

Half blinded and wild with pain and rage, Rabbi May pulled a pistol out of his frock-coat pocket and opened fire. Most likely he was armed with a double-barreled derringer, because he had only two shots on tap. The first one was a clean miss; the second shot tore through Waldman’s coat sleeve but missed him.

Then, as May fumbled for cartridges, a bystander tackled him to the ground and disarmed him, at which point Waldman recovered from the shock and pounced upon him. More bystanders had to get involved to drag him off his disarmed enemy. Finally a policeman arrived and arrested them both.

In court, Waldman was fined for assault; after all, he had started it. As for May, if any charges were filed against him, I haven’t been able to learn what they were. Most likely, “discharging a firearm within city limits” was not yet a crime in Portland in 1880.

But he didn’t exactly get off scot-free. Rabbi Moses May left his position immediately; it’s obvious that he was asked to step down. The board bought out the balance of his two-year contract to the tune of $1,200, and he left town. Everyone understood that the provocation had been great, but as Rabbi Wise himself (the author of the Minhag America) later wrote in his magazine, American Israelite — “did you ever hear of a rabbi carrying a pistol?” — “There is, of course, a vacancy in the Portland Congregation,” Wise added, “and poor May will either have to go to peddling or join the shooting Baptists.”

Waldman, who was entirely uninjured in the fight, paid his fine and carried on with his quest to keep Beth Israel Orthodox. It was to no avail; Beth Israel never did officially switch back to the Minhag Ashkenaz, although the Orthodox members battled on for another 20 years.

President Rutherford Hayes, who most likely didn’t see the gunfight but was definitely endangered by Rabbi May’s wild flying pistol bullets flitting about the street a dozen feet from his window, left the hotel as if nothing had happened an hour later to visit some local notables. He gave a speech to about 9,000 Portlanders at the Mechanics’ Pavilion that evening. Over the next few days he visited an Indian school in Forest Grove, celebrated his 58th birthday on board the sternwheeler Wide West, and attended another gala reception in The Dalles. By Oct. 7 he had moved on to the Washington Territory, and at the end of the month, he was back in Astoria, catching a steamer headed south to San Francisco and eventually back home to the White House.

(Sources: The First Rabbi, a book by I. Harold Sharfman published in 1988 by Pangloss Press; “On the Road with Rutherford B. Hayes,” an article by Kristine Deacon published in the June 2011 issue of Oregon Historical Quarterly; Oregon State Archives Facebook page at facebook.com/OregonStateArchives; “War on the Willamette,” an un-by-lined article published in the October 1958 issue of American Jewish Archives)

Finn J.D. John teaches at Oregon State University and writes about odd tidbits of Oregon history. His book, Heroes and Rascals of Old Oregon, was recently published by Ouragan House Publishers. To contact him or suggest a topic: finn@offbeatoregon.com or 541-357-2222.

In May of 1895, on the old San Francisco waterfront, four sailors signed onto the four-maste…

Offbeat Oregon: Ain’t no party like a shanghaiing party - One sailor’s story

One fine day in October of 1891, a teenage boy named Aquilla Ernest Clark left the farm in S…

When should you or your aging family member stop driving?