A pond community Winogradsky column in 2012.

A pond community Winogradsky column in 2021. 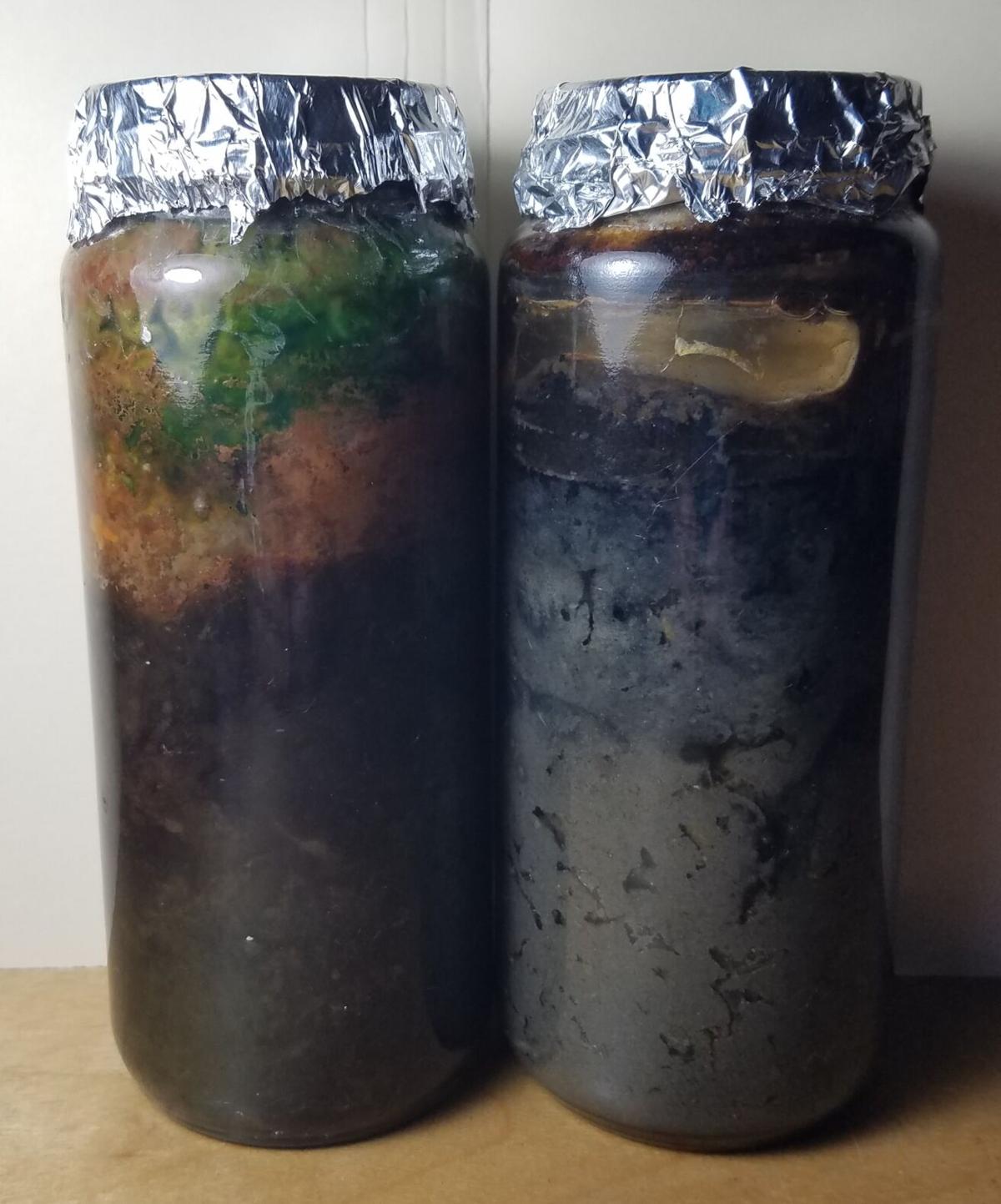 A pond community Winogradsky column in 2012.

A pond community Winogradsky column in 2021.

I made my first Winogradsky column in 2006, and five years later I adopted a column I made with the first, but had given away. They’re among my favorite “nature things” in my office. I checked on them again recently to see how they were doing: The seals on the tops had leaked since I had last checked, so they were low on water, but they were otherwise OK.

A Winogradsky column is a kind of microbe aquarium that mimics the bottom of a pond or estuary. It is named after its inventor, Sergei Winogradsky (1856-1953), a Russian microbiologist who pioneered in microbial ecology — communities of microbes.

Winogradsky columns are vertical, clear cylinders filled with water-logged mud, often supplemented with a handful of ingredients to feed the microbes, and topped with water and air.

The Winogradsky columns I made for myself are quite small: only 2 inches across and 6 inches tall. I have two: one derived from a freshwater pond and one derived from an estuary (mix of fresh and saltwater). The pond community started evenly brown and the estuarine community started all gray; the differences in color, patterns, and textures of these two columns have become even more pronounced in 15 years.

Gathered from the field, the mud and organic material naturally contains a huge variety of microbes. Some of the microbes are alive and some are “encapsulated” in a sort of hibernation, awaiting favorable growing conditions.

Aerobic microbes (microbes that require oxygen) in the mud at the top of a Winogradsky column have their oxygen replenished by the air and the photosynthetic algae growing at the adjacent surface layer.

Different species of microbes in the mud thrive at different levels of oxygen and hydrogen sulfide in the Winogradsky column; the life also varies around chunks of organic material and bubbles of water or air in the sediment.

Those colors and patterns change over time as the populations of microbes grow and adjust, and as they affect one another and modify their environment.

In 2012 I rescued a 14” tall column that I made at the same time as the short ones, but had given away — “rescued” because it had dried out almost completely through accidental neglect. The water I added sat on top of the shriveled-up mud, so I ran a probe down the side to accelerate the rehydration. A few years later, new patterns of community/color started to emerge around the vertical intrusion the probe made.

Today, nine years later, my tall column is even more varied, with quarter-sized patches of green in areas of black that have expanded into the basal red. Since the green patches are mid-way in the column, they almost certainly developed around old air bubbles. A couple of new pockets of air recently opened up in the sediment when the water level dropped — adding to habitat variety.

Winogradsky columns have been known to transform and sustain themselves for many years with little or no maintenance. I’m looking forward to seeing what mine do next!