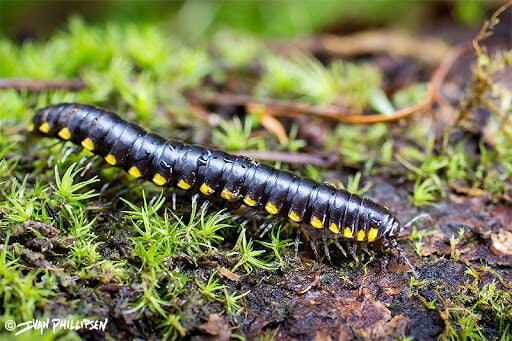 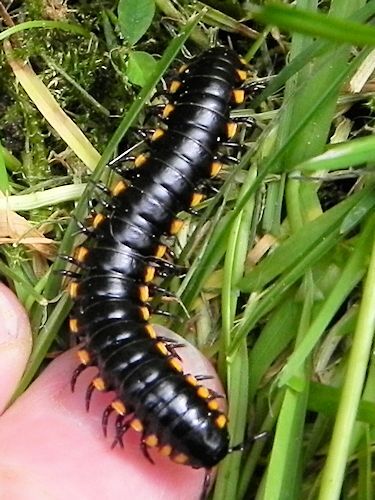 Someone mentioned the other day that it was about time to see the millipedes out and about again.

You’ve probably seen them yourself.

Millipedes are essentially strings of jointed segments, each segment with two pairs of legs. Our local yellow-spotted millipedes (Harpaphe haydeniana) are up to two-and-a-half inches long, striking jet black with bright yellow spots along the sides. There’s one yellow spot on the outside edges of each segment, where the low, rounded back flares out over the legs.

Although “milli” means thousand and “pede” means feet, millipedes never have that many feet. Newborn millipedes have only a handful of segments and the animals add a segment each time they shed their exoskeletons as they grow. The maximum number of legs for any millipede species is 750; ours usually have fewer than 100 legs in multiples of four, two on either side of each segment. (And, yes, millipedes have been observed “tripping over their own feet” when traveling at high speeds!)

Nearly all millipedes feed on dead plant material, primarily fallen leaves. Yellow-spotted millipedes are especially fond of conifer needles, likely recycling at least a third of the needles in our wet, regional forests.

Yellow-spotted millipeds to not bite, but when disturbed will curl up and give off a cyanide gas to ward off potential predators. The gas doesn’t detour all predators, however, and many other animals dine on millipedes -- other invertebrates, such as centipedes, and a few vertebrates, such as shrews.

Could you be gassed by a millipede? They don’t give off enough cyanide gas to hurt people, though people with especially sensitive skin might experience burning when handling a millipede, so it’s a good idea to wash your hands if you pick one up.

With their jointed exoskeletons, millipedes are clearly arthropods. However, millipedes are not insects, crustaceans, nor spider relatives, but are in a separate class of arthropods: Myriapoda. (Arthropods are grouped primarily by how their bodies are segmented; Myriapoda means countless or many feet.)

Unlike insects, Myriapods don’t have a waxy, waterproof cuticle on the surface of their bodies that insects do, so they easily dry out. You may have seen crispy black curlicues in your basement in summer, the corpses of yellow-spotted millipedes that dried out before they could find moisture.

Millipedes are one of four classes in Myriapoda. Two groups of myriapods are minute, many-legged inhabitants of soil that people rarely see. The fourth group of myriapods are the centipedes. (Sowbugs, the other common segmented-body non-insect in our homes and gardens, are land-dwelling crustaceans.)

Although many people confuse centipedes with millipedes, they are actually quite different. Centipedes have only one pair of legs on each segment (one leg on each side), and they tend to have longer legs and usually sport long posterior appendages. The first set of centipede legs is modified to a formidable set of poisonous jaws -- centipedes are predators. The agile, fast-moving centipedes hunt down smaller invertebrates, including millipedes, and helpfully reining in populations of cockroaches, silverfish, and other pests.

Apart from their disagreeable smell, our detritus-feeding millipedes merely tickle when they walk over your hand. Centipedes, however, can inflict a painful bite.