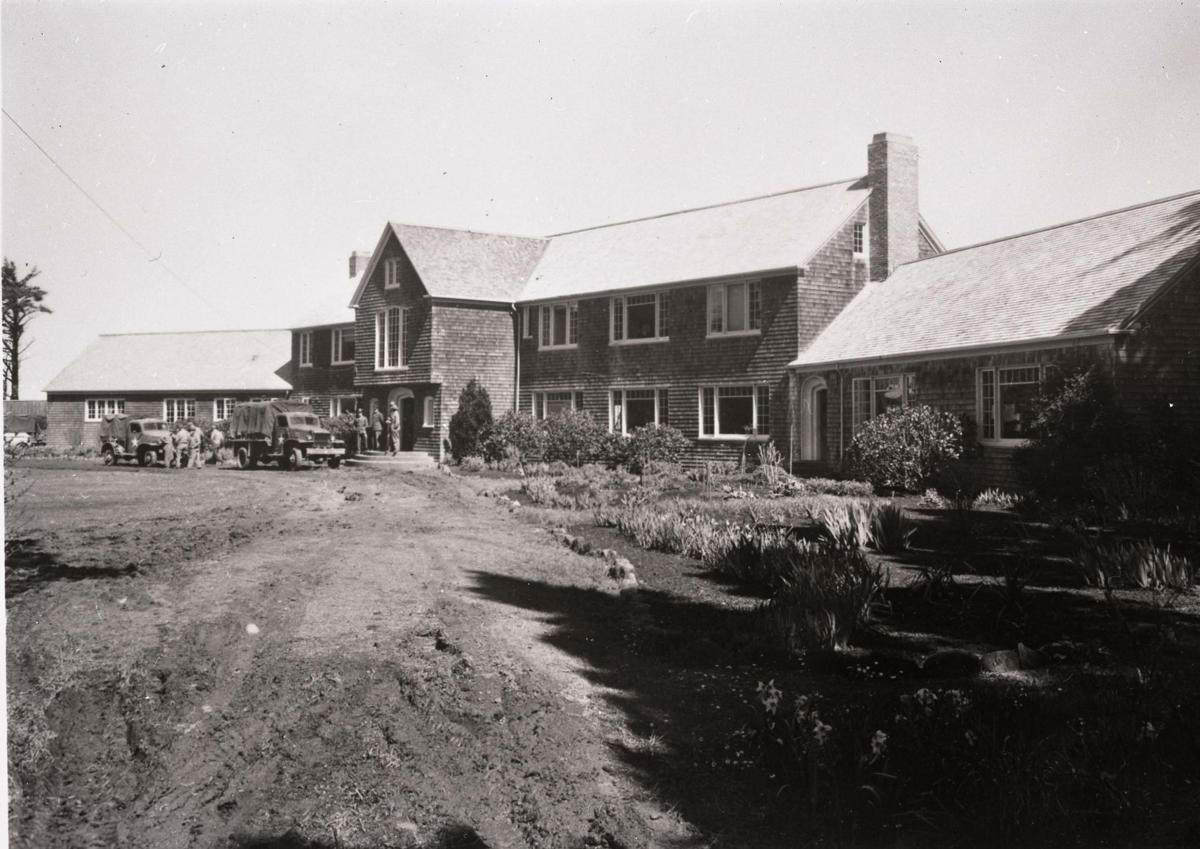 Army personnel in 1943 at the Louis Simpson home at Shore Acres. Simpson had deeded his property to the state of Oregon in the 1930s and the Army was using it during the war as a lookout for Japanese submarines and ships. Company G of the 174th Infantry, 44th Division manned this location and the installation described below. After the war, this home was torn down. (CHM 992.8.0364). 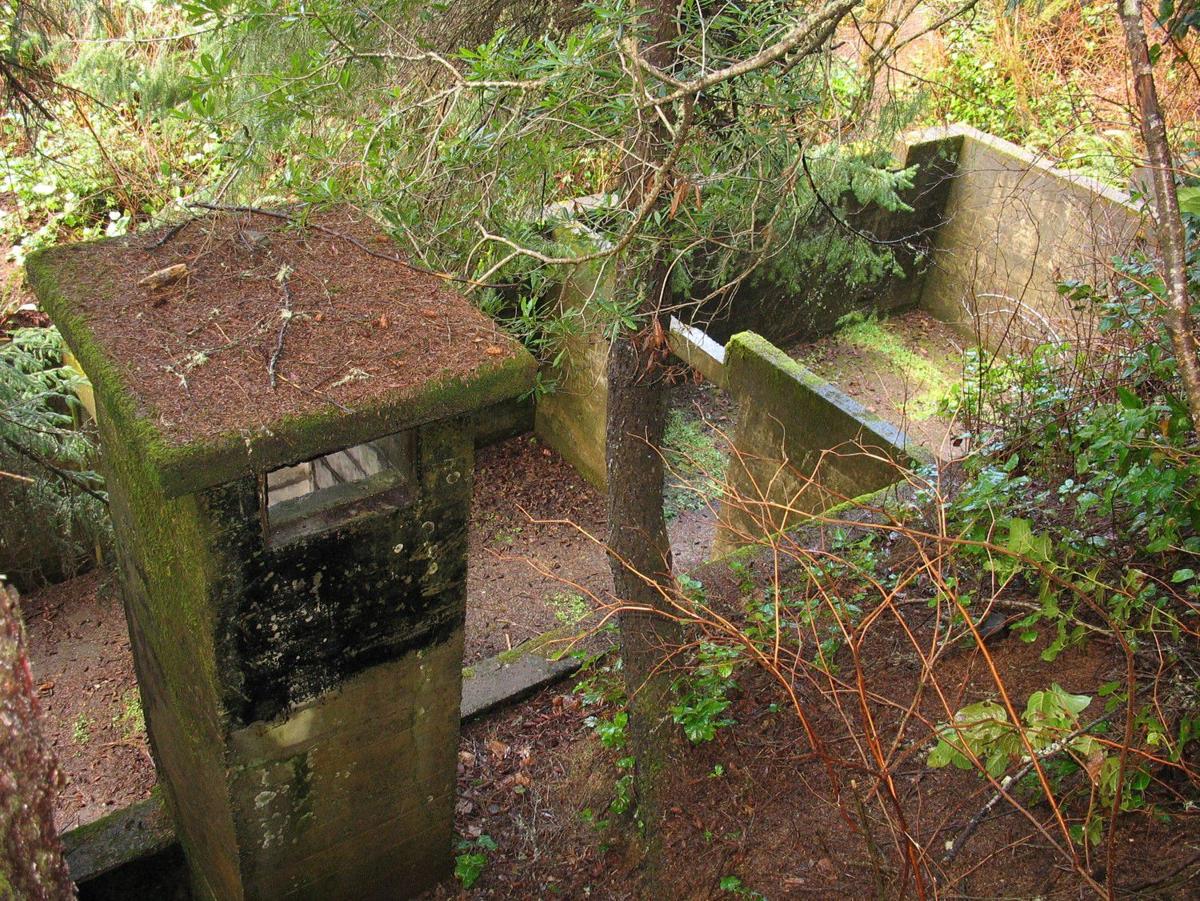 The "Installation over Shore Acres" shows the remains of an Army lookout called "Cape Arago B-28". It was one of 40 along the West Coast from Puget Sound to San Diego. Radar installed here could glean data out to about 120 at sea. The ruins are still accessible to the public today.

Army personnel in 1943 at the Louis Simpson home at Shore Acres. Simpson had deeded his property to the state of Oregon in the 1930s and the Army was using it during the war as a lookout for Japanese submarines and ships. Company G of the 174th Infantry, 44th Division manned this location and the installation described below. After the war, this home was torn down. (CHM 992.8.0364).

The "Installation over Shore Acres" shows the remains of an Army lookout called "Cape Arago B-28". It was one of 40 along the West Coast from Puget Sound to San Diego. Radar installed here could glean data out to about 120 at sea. The ruins are still accessible to the public today.

Local residents under the age of 80 have no direct recollections of the largest crisis to hit the South Coast during the last century — America’s entrance into World War II. Revisiting the history of the early 1940s, however, can provide lessons about sacrifice, adaptation, and ingenuity as Coos citizens cope with the COVID-19 pandemic in 2020.

Unlike today’s microscopic coronavirus, the enemy after December 7, 1941, was clearly visible. Japan’s attack on Pearl Harbor spurred Americans to fight an obvious security risk. Yet similarly, federal and state governments issued numerous directives and laws against the “enemy” that dramatically changed the daily lives of citizens throughout the nation and the South Coast.

Beaches were closed to the public and the roads west of Charleston were off-limits to all but essential traffic. A Navy installation was built at Coos Head and Louis Simpson’s home at Shore Acres was taken over by the Army to protect the West Coast. The North Bend Airport was converted to a naval air station with pilots dropping dummy bombs on targets on the dunes. Coast Guard personnel and citizen volunteers patrolled the beaches with dogs or on horseback in anticipation of an invasion by Japan. Marshfield student Philip Matson was only 15 (and under the legal age requirement) when he joined local reserves. He had just learned how to drive. But as older men were shipped off to the South Pacific, he wanted to “do his bit” and was soon patrolling local beaches in a jeep, often alone, on 6 to 12-hour shifts. “My driving skills were improved considerably,” he recalled.

Perhaps 2,000 to 3,000 volunteers served at over 30 stations of the Aircraft Warning System on the South Coast during the war. They coordinated with the Army to report potential enemy aircraft. Children were even involved. A lookout was constructed atop Bandon High and was manned primarily by high school boys. In south Coos County, an 8-foot by 8-foot shack was built across from the Bridge School. During the day, sixth, seventh, and eighth graders would take turns manning the post. If a plane was sighted, the children were told to run and tell their principal. The cupola of the old Myrtle Point High School building was manned by the Bobcats.

Coos citizens obeyed government “blackout” directives designed to make it harder for enemy planes to bomb the South Coast at night. In late October, 1941, a 10-minute county-wide emergency blackout system was tested. The lights even went out that night during the football game at Marshfield with Hood River High. After Pearl Harbor, there were no longer night football games for the duration of the war. All over the county curtains were pulled over windows at night, streetlights were shut off, and special coverings dimmed car headlights. Blackout wardens patrolled neighborhoods to insure compliance.

Speaking of sports, automobile and motorcycle racing were suspended entirely in the U.S. for the duration of the war due to gas and rubber rationing. The 1942 Rose Bowl football game (won by Oregon State) was moved from California to the East Coast. The Olympics intended for Tokyo in 1940, and the games scheduled for London in 1944, were both canceled.

Like today’s COVID-19 crisis, essential and non-essential workers were identified. People weren’t quarantined but were told to stay close to home or work in case of an attack. A local civilian defense official said that, “if and when enemy planes are sighted over Coos County,” steps would be taken to evacuate non-essential workers. As for essential workers — “We’ll stay here and take it,” he declared. The official was concerned about having enough protective equipment, however. He hoped that “gas masks, pumpers, and fireboats” could be rushed to the South Coast in an emergency. The threat of an air raid was not an idle one. The only direct hit of the war by a Japanese plane on the lower 48 states did occur on the South Coast in September, 1942. A floatplane, launched from a Japanese submarine, dropped incendiary bombs near Port Orford and Brookings with the intention of starting widespread forest fires.

Schools have been closed in Oregon during the spring quarter of 2020. They were open in WWII but student/faculty life was still impacted by the war. After Pearl Harbor, the State Department of Education requested that all manual training classes in Oregon high schools build 50 airplane models for use in the emergency training program in enemy aircraft identification. Home economics courses stressed household conservation. Science instruction emphasized radio operations and aeronautics and some NBHS students took aviation classes at the Navy airfield. Physical education classes expanded. North Bend High started a gun club, an archery club, and a fencing club. The school district purchased a film called “Fighting Incendiary Bombs” that was shown to students. With so many men enlisting for the military and some women taking jobs in war production factories, the school board worried about its ability to staff the schools with teachers. As a result, in 1942, the board rescinded a policy against the hiring of married female teachers. The next year the NB board responded to a plea from the U.S. Employment Service to use high school students to assist in Coos County’s fall cranberry harvest in several commercial bogs in the Bangor area of the city.

By 1943, every male student who turned 18 by the end of the school year was drafted into military service. Hugh Milleson, a football player for North Bend Coach Vic Adams, recalled that early in the spring the boys were all sent to Portland for physical exams. They took every student in the senior class. “We were sworn in and then taken back to North Bend and back to school. After graduation, we were shipped out about five days later to Fort Lewis,” said Milleson. “We traveled by train with boys from Marshfield High. Then we were really in the armed forces … Everyone that was physically fit was in the armed forces, even if you did not want to go. I was not too crazy about going into the army but did not have a choice. You could not stay and work or go to college. Uncle Sam wanted you!”

During our current crisis, citizens worry about the availability of certain grocery items. In WWII, the government actually restricted citizen shopping so that supplies could be used for the war effort. Meat, sugar, eggs, butter and other products could only be purchased with limited ration stamps that were distributed periodically in ration books. Many items were in short supply. The American Fat Salvage Committee was created to urge housewives to save all the excess fat rendered from cooking and donate it to the Army to produce explosives. Almost everyone complied with these measures.

During WWII, there was, in effect, a travel ban. Unless you were deemed an essential worker (like my grandfather, Roland Greif, who delivered milk to homes), drivers were issued an “A” sticker for their windshields which entitled them to four gallons of gasoline a week. No cars, commercial trucks, or auto parts were made from February 1942 to October 1945. All sales of cars were frozen by the government's Office of Production Management as car companies converted their production lines to military equipment.

Many people during the coronavirus event have been thrown out of work. During WWII, the employment picture in Coos County was also muddled. When Japan diverted its civilian ships to assist with its conquest of China in 1937, the Coos Bay Logging Company had to curtail production because it had relied on Japanese ships to transport logs to Asia. In 1938, the Coos Bay Pulp Corporation found itself without a market since it was almost totally dependent upon exports to Japan. In the year after Pearl Harbor, lumber mills slowed production when President Roosevelt banned all non-defense construction and commandeered many civilian ships for military use rather than lumber transport.

Bay Area employers also became increasingly worried about the loss of skilled workers to Portland shipyards or airplane plants in California or Seattle. The use of the chainsaw, which replaced the crosscut saw – and other types of new technology – began to revolutionize the timber industry. The workforce changed when women took wage labor jobs during the war in industries, like timber, that had traditionally been the purview of men. Of the 1,200 employees at the Evans Products Co. in south Coos Bay, 800 were women during the war working primarily in the production of battery separators.

The saying “necessity is the mother of invention” held true during WWII. Radar, nylon, synthetic rubber, superglue, computers, and penicillin were just some of the things developed as result of the war effort. It is the hope that scientists can soon develop tests, medical equipment, and vaccines to make our world a safer place in the 2020s.