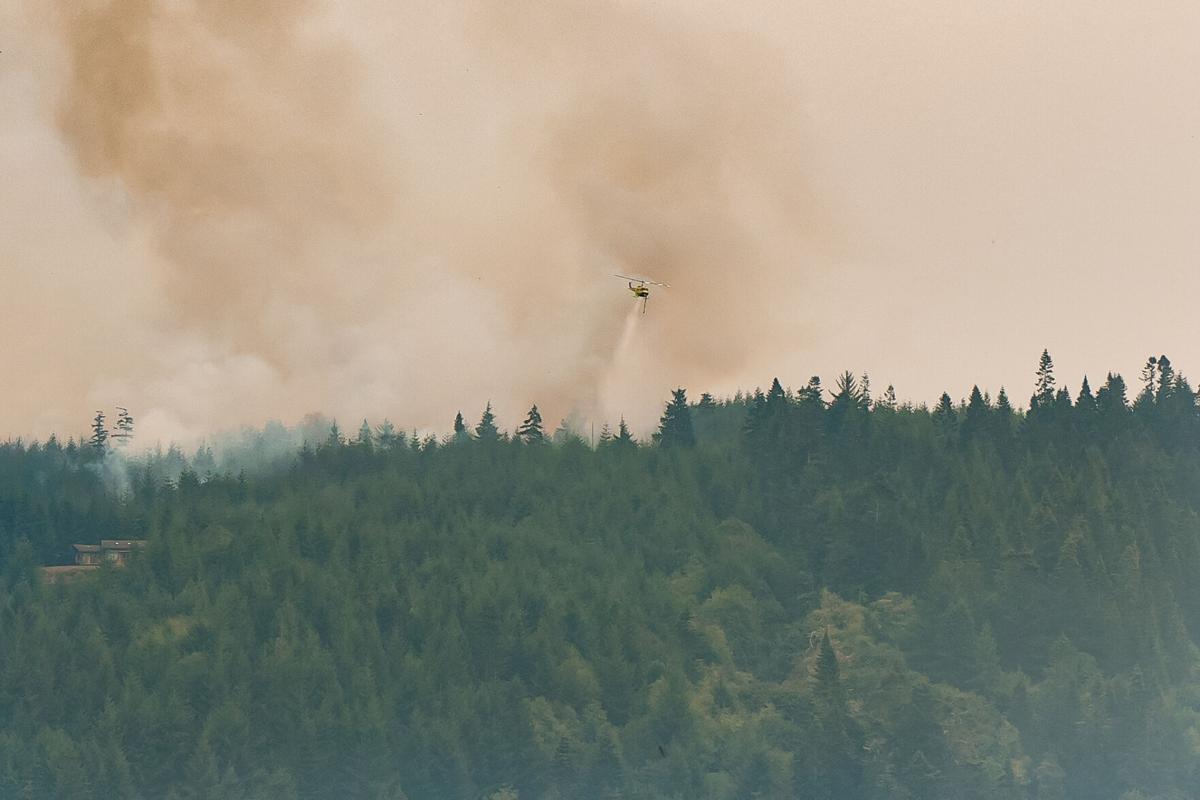 Geneva Miller captured this image from her home on Highway 42S Wednesday afternoon of a helicopter dumping water when flames were still erupting on the other side of the Coquille River on North Bank Lane. 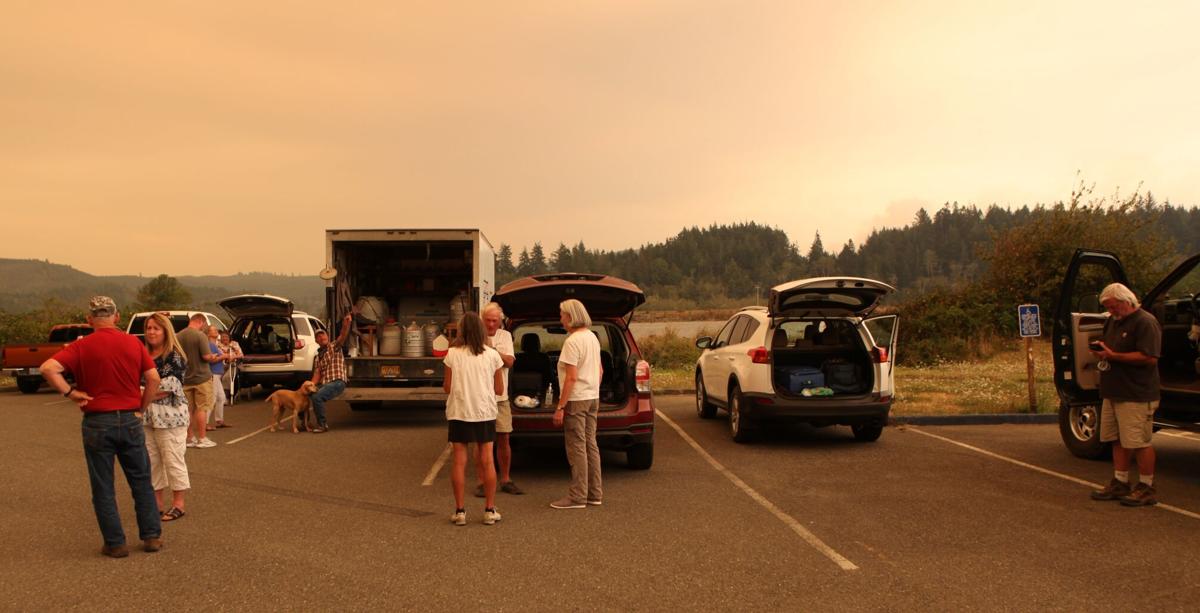 Residents of the North Bank Lane area gather at the Rocky Point boat launch after evacuating from their homes Tuesday afternoon.

Geneva Miller captured this image from her home on Highway 42S Wednesday afternoon of a helicopter dumping water when flames were still erupting on the other side of the Coquille River on North Bank Lane.

Residents of the North Bank Lane area gather at the Rocky Point boat launch after evacuating from their homes Tuesday afternoon.

COOS COUNTY — Within hours of the first reports of a fire near North Bank Lane Tuesday, some families in the area were beginning to evacuate.

But Gabe Fabrizio, Coos County's emergency manager, wasn't expecting to have to evacuate residents so quickly that day. The fire, he said, took county officials by surprise.

"We certainly didn't anticipate this one, with the need for evacuations," Fabrizio said.

Said by witnesses to be sparked by downed powerlines though officially still under investigation, the fire between Bandon and Coquille forced some residents to evacuate from their homes at the instructions of fire officials — and pushed even more people, unsure of the fire's location, to choose to evacuate themselves.

Aside from individual officers knocking on doors and telling residents to leave, information about the fire was scarce throughout the day Tuesday, and many took to social media for answers. Official details was scattered, spread between Facebook groups and the pages of various cities and fire departments.

"There had been a lot of rumors going around," said John Sweet, a Coos County commissioner. "And that concerns me a little bit."

Still, Sweet says the county is prepared to handle evacuation notifications in the event that more homes are in danger. In that case, the county could declare an emergency and dedicate resources to an incident command post.

"I'm not aware of a situation where someone was in jeopardy because of the fire and was not given warning," Sweet said.

Tuesday's historic weather conditions, with high winds, high temperatures and low humidity, were a surprise to many across the state. The conditions, fueled by a changing climate, the extreme weather has lit thousands of acres in the West with wildfires, including several approaching major cities.

"You can't really anticipate something like that," Coos County's Fabrizio said.

For official information about the fire, both Fabrizio and Sweet pointed to the Coos Forest Protective Association, the agency that manages the response for forest fires along the South Coast. But with the agency's public information officer doing operations work for the North Bank Lane Fire crews, many who called the office seeking information about the risk near them received none.

"If we're trying to suppress the fire, on the first day, it can get a little hectic," said Dominique Ray, CFPA's business manager who was also assigned to provide public information about the fire starting Wednesday.

Still, Ray says, CFPA is the right point of contact for residents seeking information about fires in their area.

In the event of a larger-scale evacuation, Fabrizio says the county will send Sheriff's deputies door-to-door to warn residents in harm's way. It'll also send out messages via Everbridge, a notification system that calls and texts subscribers during emergencies.

Those warnings come at the decision of an incident commander, like CFPA officials, Fabrizio said. The county warns potential evacuees with three different levels: a "get ready" warning, a "get set" warning and a "go" warning.

On Tuesday, county officials didn't use an Everbridge notification, since there wasn't a large number of homes under threat, Fabrizio said. Instead, deputies and police officers knocked on doors, and neighbors spread the word.

Sweet, however, wonders about what more can be done to share information with those who might not be directly in harm's way, but still worried about the risk to them — like the people who self-evacuated Tuesday or furiously commented questions of official Facebook posts.

"It can create a sense of panic," Sweet said. "We're going to look at how we can help control that."

In the mean time, Fabrizio says the county doesn't have a "super set" plan of where to send evacuees in the event of a larger-scale evacuation, like the ones seen across the state this week. Residents, he says, should make plans of possible evacuation locations and "go bags" with key survival items in case they need to leave at a moment's notice.

"It never hurts to be prepared," he said.

Coos County residents can sign up for Everbridge alerts online at member.everbridge.net/892807736724057/login. Only those who subscribe will receive alerts.