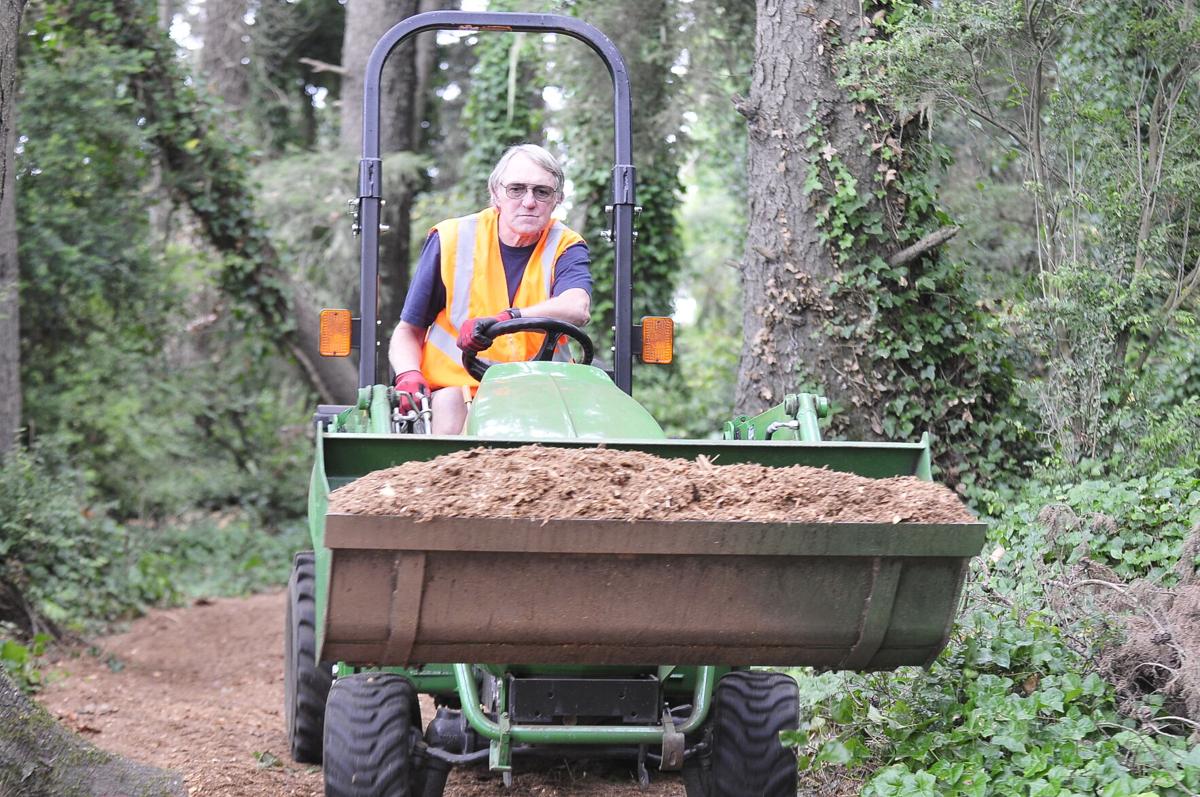 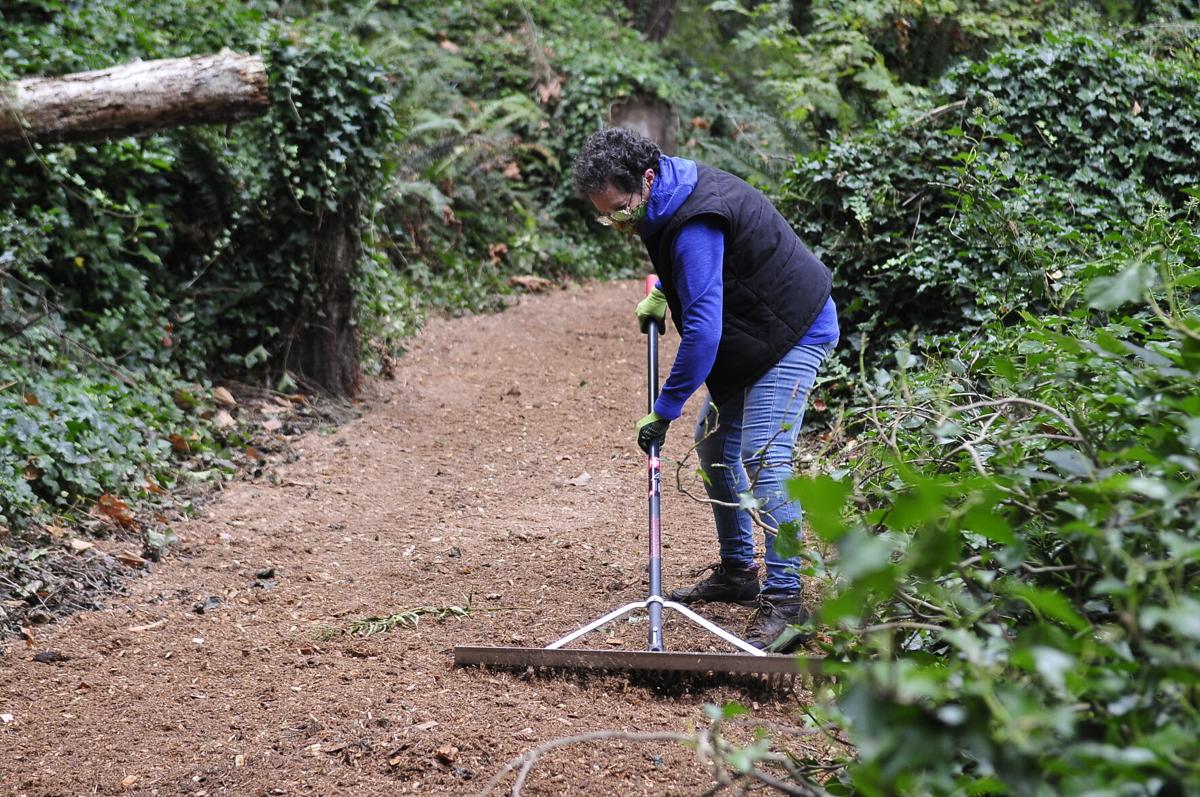 NORTH BEND — Like getting a fresh coat of paint, the nature trail at Ferry Road Park received a fresh surface of chips last week.

The joint effort between a few local businesses donating materials and services and volunteers doing the labor (rewarded with food donated by businesses and community members) has quickly improved the half-mile trail through the forest in the North Bend park.

The trail was the Eagle Scout project of Noah Langlie back in 2013, but had become overgrown somewhat. So Jim Tofflemire and Jim Clarke spent time cutting back the brush to widen it in preparation for the chips, which came from Roseburg Forest Products, delivered in a truck by Erv Bettendorf Trucking.

Justin Partney of Scott Partney Construction used a front loader to move parts of the chip pile to the trailheads for the path.

“That pile of chips looked like Mount Everest,” Tofflemire said of the initial huge pile. “What a godsend for covering the path.”

A second godsend was Tofflemire’s brother, Mick, who came down from Hillsboro with a tractor that was small enough to repeatedly drive along the trail, with a load of chips in its scoop, saving countless trips with wheelbarrows.

Mick was happy to contribute to the project.

Various people helped spread the chips throughout the week, including a few Mormon missionaries and some other community members.

Clarke pointed out places where the trail had been widened, and where chips had been added, both making the trail soft to walk on and smoother.

“Covering up all the roots making it easier to walk on,” Jim Tofflemire said.

On Wednesday, Lauri Thomas was raking the chips after Mick Tofflemire dumped them on the trail.

“This is a great community project,” she said, adding that even though she is a frequent hiker she had never used this particular trail.

“Every time I’ve been here, people come walking through,” he said.

Andrea Sharman, who lives near the park and coordinated supplies and meals during the week, said the trail is such a good place for walking that people drive to North Bend from other areas just to use it.

That Jim Tofflemire was heavily involved in the trail came as no surprise to her.

“Jim has been working for 12 years reclaiming the park for us,” Sharman said.

Tofflemire helped clear the western part of the park, a little bit at a time, taking out the undergrowth as well as several trees. Now it is open and grassy.

He also pushed the brush line back from a paved trail that he was instrumental in the creation of through his involvement with the Kiwanis Club.

“There is value in green space,” Tofflemire said. “If they can’t mow it with a riding lawnmower, they can’t maintain it.”

The transformation has been extensive, from thick underbrush.

“It’s been fabulous,” Sharman said. “I have a view from my kitchen, dining room and bedroom. I have seen the increased use and the people loving it.”

Tofflemire’s more recent area of emphasis in the park has been an area behind the baseball field that he calls the Maple Grove, which also has been cleared of dense underbrush.

Several new maple trees have bene planted, dwarfed by the towering old maples in the grove. In addition to salmonberry and blackberry shrubs, Tofflemire also removed many of the ferns to create open space and has planted a variety of daffodil bulbs, with plans to plant more flowers including foxglove.

Dead or dying trees were also removed, just like in the western part of the park, the firewood donated to needy families, he said.

The maple grove will become the site of a 30-foot-by-30-foot patio, which Tofflemire said can be used for family activities, weddings and summer camps, as well as four benches.

“All of this is being done through donations,” he said of the patio. “It’s going to be maintained by volunteers, too.”

That’s something he is very familiar with.

Tofflemire usually spends Tuesdays and Thursdays working in the park. This week, he worked every day on the project to resurface the trail. And he worked longer each day.

“Usually when Jim works, he only works til noon,” Sharman said. “When he said his brother was coming, I thought, ‘I’ve got to feed these people.’”

All helped make the trail resurfacing a success.

“It’s been really great,” Sharman said. “This is a wonderful project.”