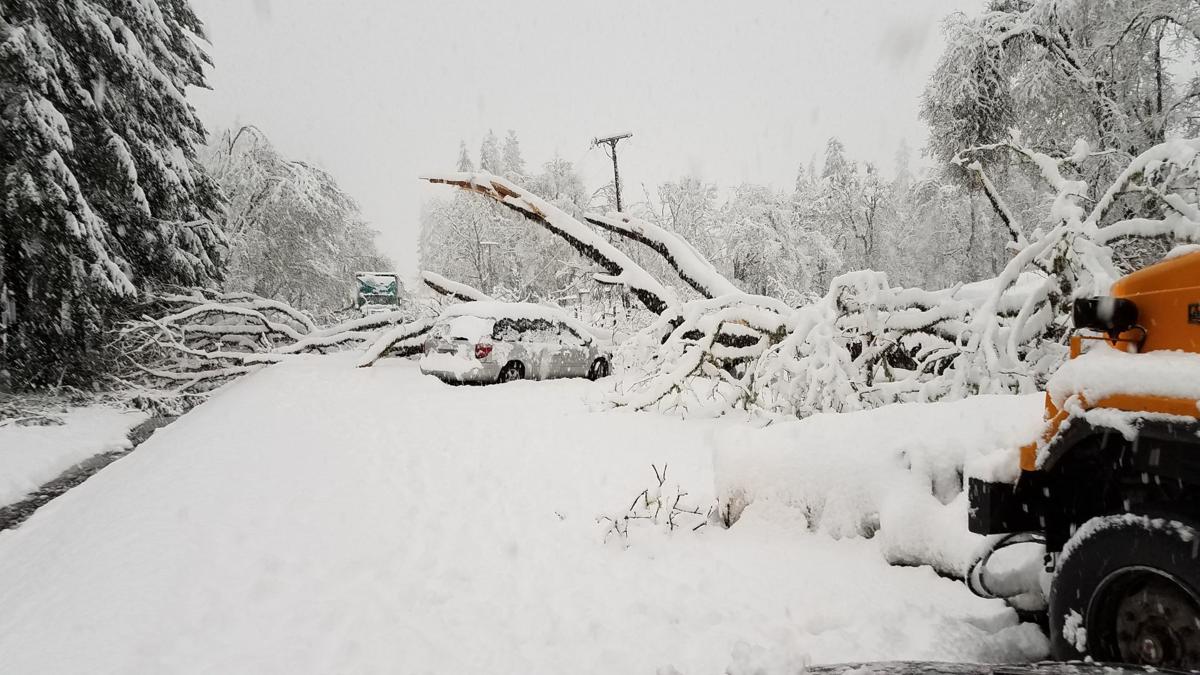 Rescue efforts to reach those stranded in Elkton took 16 hours. 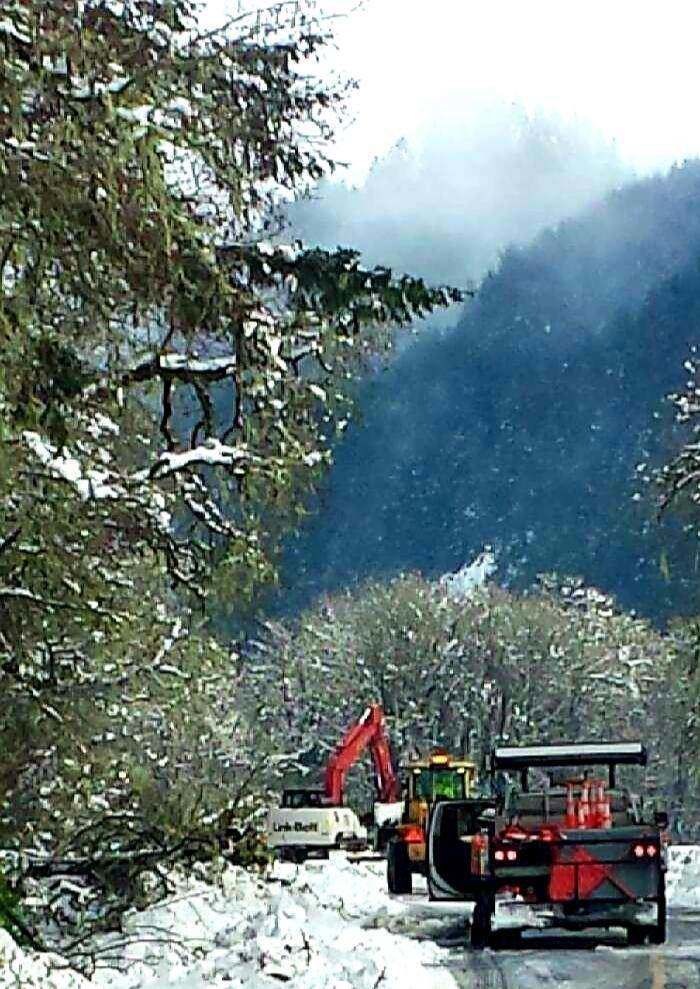 Oregon State Police troopers responded to reports of accidents in the Elkton area when they became trapped in town as trees and power lines fell beneath heavy snow. 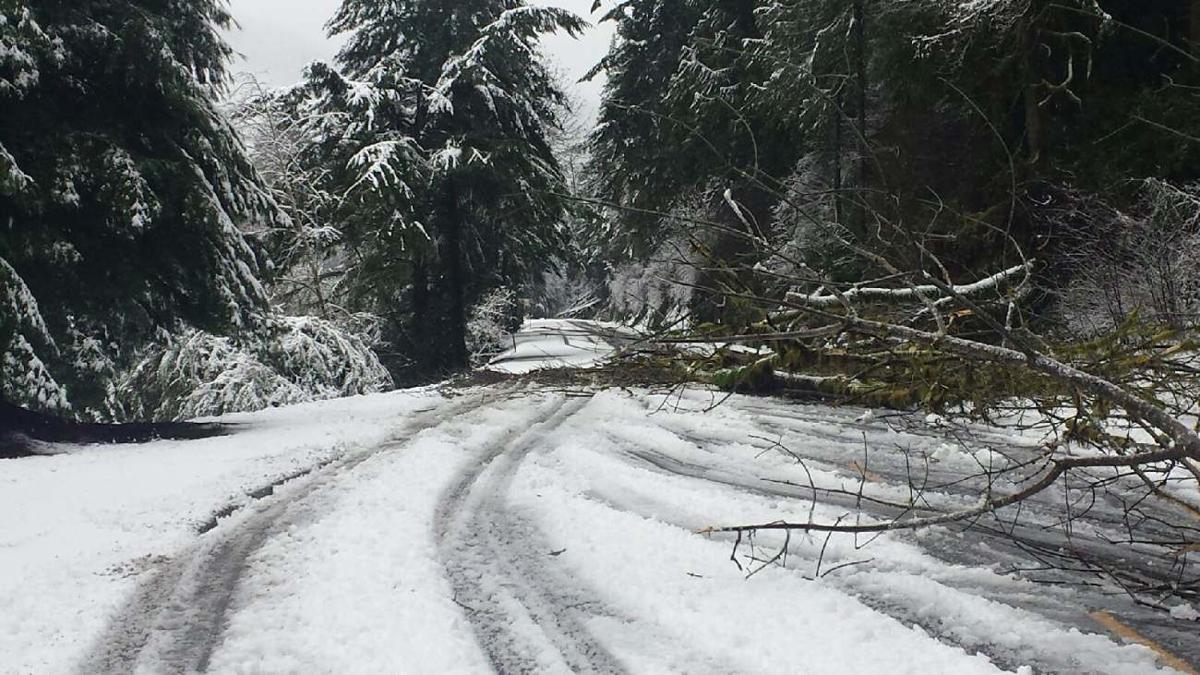 ELKTON — Last week’s storm left Oregon State Police troopers trapped in Elkton, along with an entire town and 70 travelers who had hoped to just pass through.

But on that first night when the power went out, they listened to the sounds of trees cracking and popping, breaking under the weight of wet snow.

It started on Sunday, Feb. 24 when the storm blew across the southern Oregon coast. Oregon State Police knew it was going to be a bad one as reports of crashes and slides starting coming in at 7:55 p.m. that night, according to a written statement sent to The World from OSP.

Some of those calls reported trees falling as snow fell fast and heavy on U.S. Highway 38 between mile posts 29 and 38.

But when troopers responded, they became trapped in Elkton as 7 to 12 inches of snow encased the town.

Trapped with those troopers was an off-duty Office of State Fire Marshal employee based out of Coos Bay, along with a Douglas County Sheriff’s deputy and two Oregon Department of Transportation snow plows.

“Many trees and large boulders fell over and onto the roadway beginning at Highway 38, mile post 7 to mile post 38,” wrote Captain Timothy Fox with OSP. “Additional trees down and heavy snow accumulation from the City of Elkton on Highway 38 east to the City of Drain on Highway 38 and to Roseburg on Highway 138 made an eastward retreat impossible.”

Fox described the disaster, which included numerous power poles and lines thrown down by the storm and buried in “multiple inches of snow.”

“The entire area east of Reedsport was without power,” he wrote.

At the time of his email, which was Wednesday, Feb. 27, Reedsport was still without power from Scoffield Road to the I-5 Corridor.

“This made communications very difficult,” he said.

But the community came together as residents, churches and businesses in Elkton opened a warming center.

“It was rumored (that some) opened their homes to stranded travelers,” he said. “It is estimated that anywhere from 50 to 70 vehicles were stranded in the Elkton area.”

To make matters worse, removing trees and debris piles was hazardous until the power lines could be grounded.

“Because the storm was also affecting I-5 and other major traffic corridors, resources were taxed for law enforcement, ODOT and public utilities,” Fox wrote.

Through most of Sunday night when the storm first hit to Monday morning on Feb. 25, snow continued to fall and trees could be heard cracking and snapping. According to Fox’s account, many of those trees broke over Highway 38, causing blockages every 100 yards along the road.

“Large trees and slides, including one large boulder the size of a Volkswagon bug slid into portions, or completely blocked, Highway 38,” he wrote.

When Monday came, OSP troopers began coordinating a rescue effort with ODOT and partners like Johnson Rock out of Coos Bay.

“Using an excavator, a small truck mounted snow plow, a front loader and chainsaws, teams of troopers and contractors began the tedious process of removing hazards and opening one narrow lane of travel to the affected areas near mile post 29.5 into Elkton,” he wrote.

One ODOT mechanic from Coos Bay arrived to fix rescue equipment after some of it broke.

“From the east, Roseburg troopers and volunteer citizens began the same process along Highway 138 with the plan of meeting each other in the Elkton area and providing a means for travelers to egress out of the area westward,” Fox said.

Douglas Electric Cooperative began work to restore power after widespread outages, working with Central Lincoln Public Utility District out of Reedsport to coordinate efforts with power line removal. According to Fox, the utility district’s help was critical at least one power line removal along the escape route.

It wasn’t until Tuesday, Feb. 26 at 1:30 a.m. that a single lane path was created, allowing the 70 vehicles to leave Elkton. They followed an OSP escort and ODOT pilot cars, which navigated the hazards that still existed on the way to Reedsport.

Fox said the effort to reach Elkton and the trapped first responders and citizens took 16 hours.

“Fuel was brought into the area by both Roseburg and Coos Bay Troopers and Douglas County Deputies to replenish first responder and citizen fuel tanks that having idled all night, were in need of enough fuel to make it to Reedsport,” Fox said. “The 76 station in Reedsport, which normally closes at 11 p.m. stayed open until after 2 a.m. to accommodate those travelers who needed additional fuel to make their final destination.”

Not only that, but one of the trapped vehicles in Elkton was an Albertsons food truck. The driver opened its doors to donate food, snacks and beverages to the stranded motorists.

“Troopers checked on citizens and acted as a calming influence despite the fact they had been on duty in some cases from 6 a.m. Sunday morning through the duration of the event,” Fox said.

One employee at the Coos Bay Area Command provided updates to families and spouses of her trapped co-workers, of her own initiative.