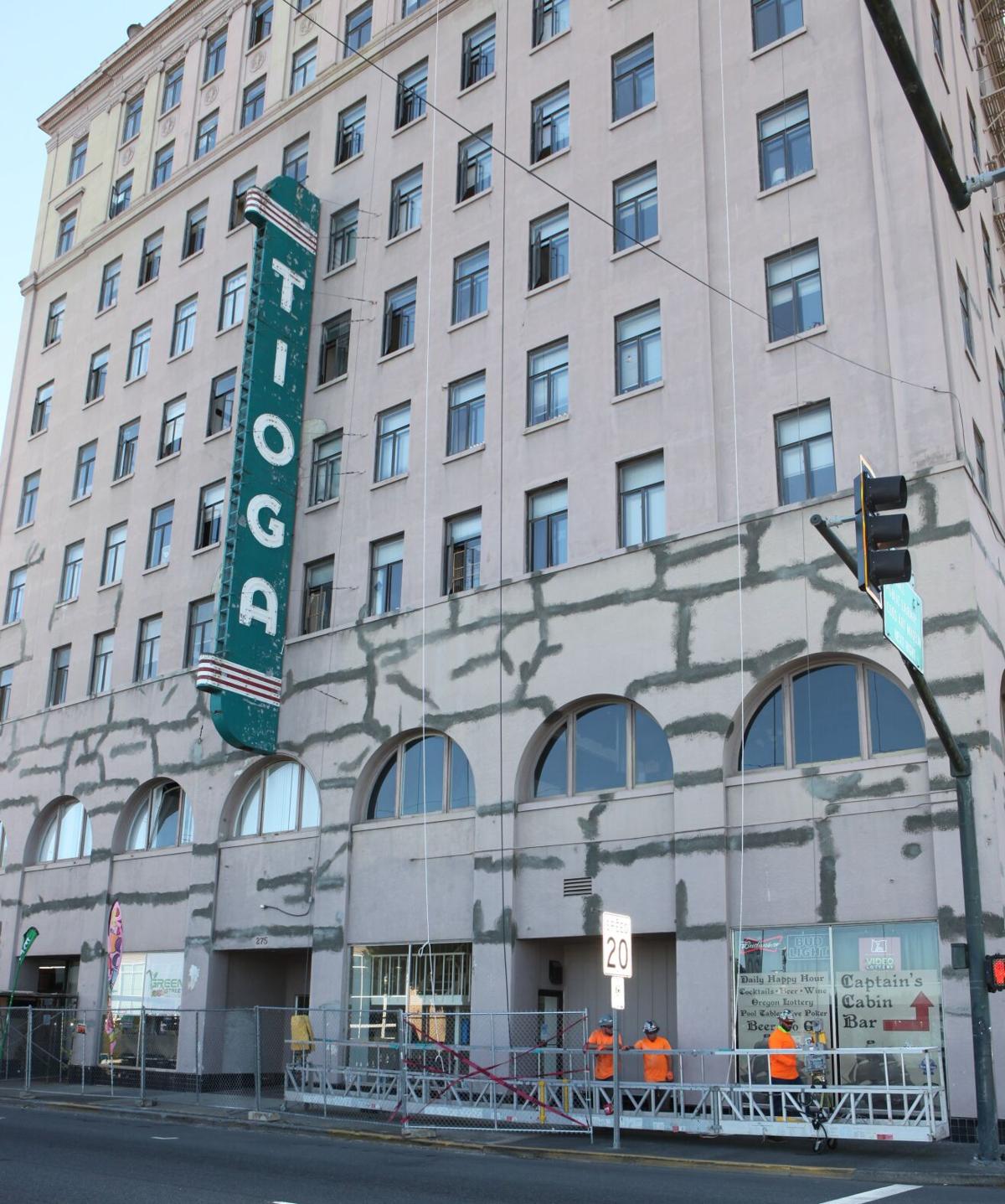 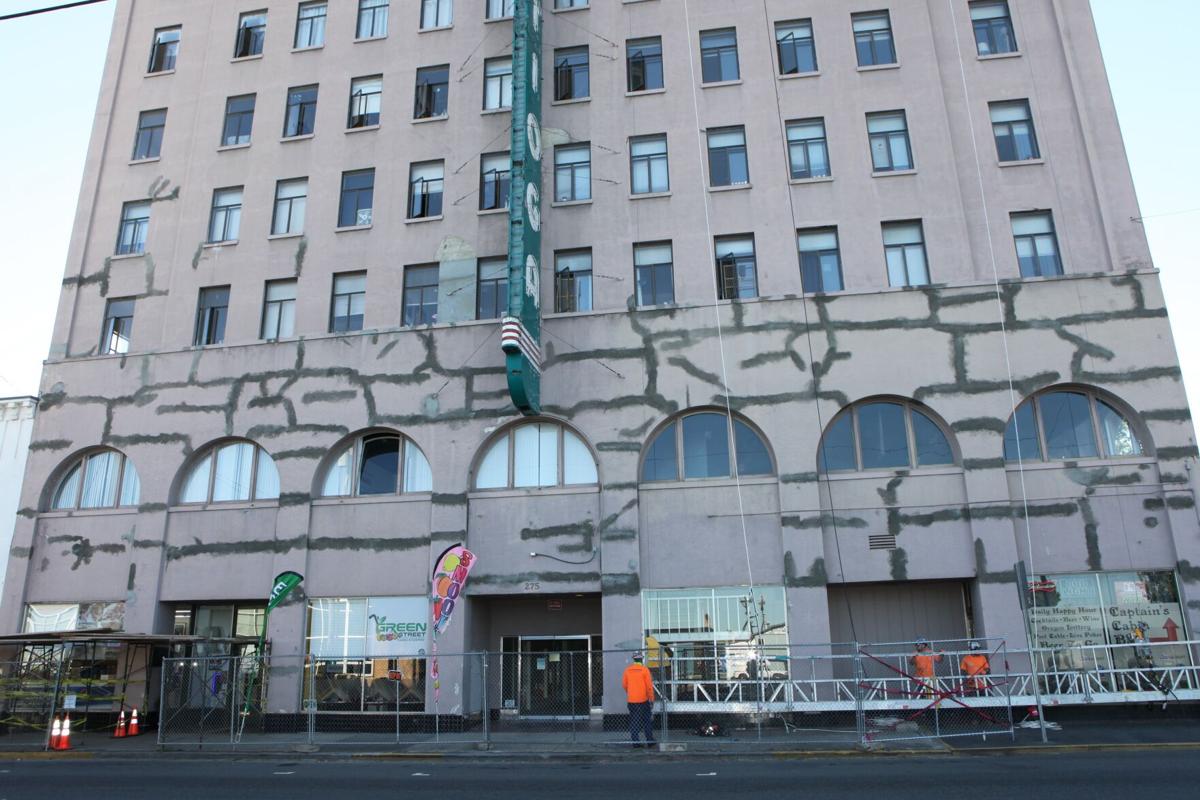 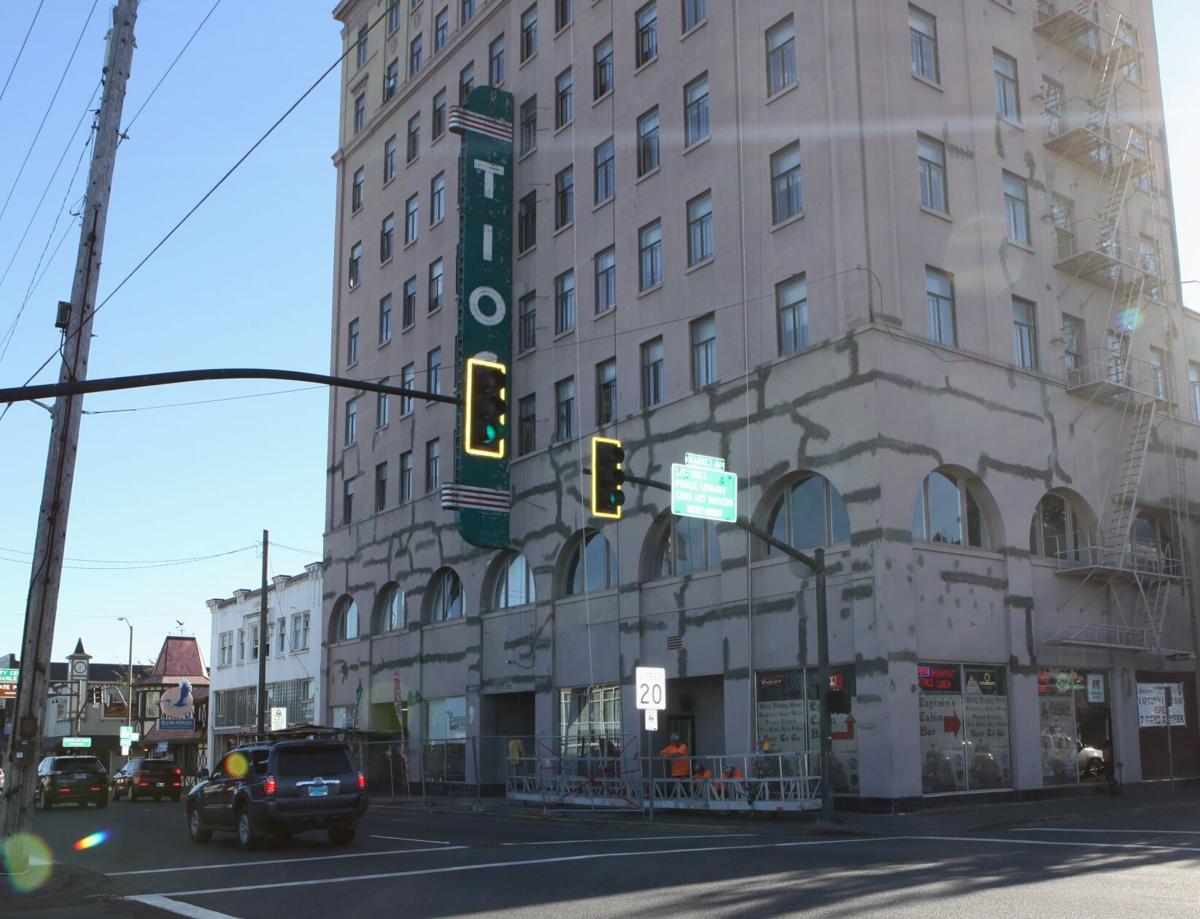 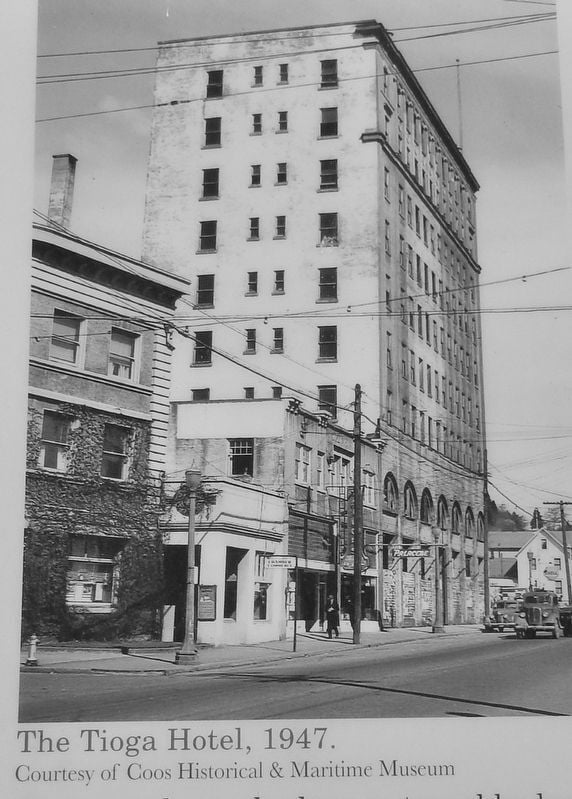 The improvements will be made to the 1920s-era Tioga Hotel's facade, lighting and sign restoration and the Koski Buildings facade, along with the parking lot fencing and lighting. Crocker also proposed to restore the transom window of the Koski Building, but it is not part of the current renovations.

For the two buildings combined, a total cost for all improvements was estimated at $737,575.

The Facade Improvement Grant program enables the URA Board to authorize 50% of the value of a project's low bid for improvements.However, the agency board has authority to provide additional funds.

The Tioga Hotel building is reported to be the tallest building on the Oregon Coast. The building is nine stories high and is 110 feet above the street at its highest point. Construction was first started in 1925, but attempts to complete it were disrupted by first the Great Depression and later by World War II. The building was finally finished in 1948. The Tioga is considered one of the most historically significant buildings in downtown Coos Bay. It is one of nine buildings in the downtown core listed on the National Historic Register.

Work to repair the exterior stucco/concrete began a couple of weeks ago. Earlier this month, Crocker presented his façade improvement plans for both the Tioga and Koski buildings to the Coos Bay Urban Renewal Agency.

In February, Crocker, with his development company Opportas Capital, announced that they had purchased some of downtown Coos Bay's most recognizable and historic buildings, including the Tioga Hotel, the Koski Building, the shorter white building located next door to the Tioga, the Bugge Bank Building at 201 Central Ave., and the Fletcher Building on the corner of Broadway and Anderson.

“Our intent is to fix up all these downtown buildings to a point where they are welcoming and a point of pride for the city,” Crocker said in February. “We want these buildings to welcome visitors, welcome consumers and tenants.”

Crocker is interested in the history behind the buildings purchased.

According to Crocker, the Tioga has been largely neglected over the last 20 years and he hopes to bring it back its former glory. With a height of 10 stories, the Tioga Building is the tallest building on the Oregon coast.

At the Bugge Bank Building, 10 apartment spaces have been developed and were completed in July to accommodate students from the Oregon Health & Science University while they study in the Coos Bay Area.

Crocker also plans to renovate the inside of the Tioga Hotel building into 52 apartment units. The Koski Building, constructed in 1916 by a Finnish immigrant and tailor, will be renovated inside to house seven units.

Crocker grew up in Reedsport, and after starting some businesses and investing in real estate, he decided he wanted to focus on developing downtown areas in rural Oregon. He said Opportas was started with building rural communities in mind.

Crocker has worked with partners at Opportas to renovate eight different buildings on Main Street in Oregon City, among other projects.

• The parking lot lighting and fencing: Install black iron fencing around the perimeter of the property with three electronic gates and lighting installation. Reseal and striping of the parking lot will be completed at the applicant's sole expense.

The Downtown Facade Improvement Program grant currently offers a 50% grant match opportunity equal to low bids received for improvements, provided to downtown property owners to upgrade their building facades. Under the program terms, the owner is responsible for the other 50% of the facade improvement costs. The 50% provided by the agency is provided to the applicant property owner upon completion of the project.

"With city authorization, stucco repair and prep for the buildings has been underway, and painting of the buildings should be completed, weather permitting by Nov. 25 (before Thanksgiving)," Crocker wrote in the application.

The Tioga sign will be restored by Dec. 31 and the painting completed by March 31, 2021. All work, even with unexpected delays, should be complete by June 1, 2021, according to Crocker.