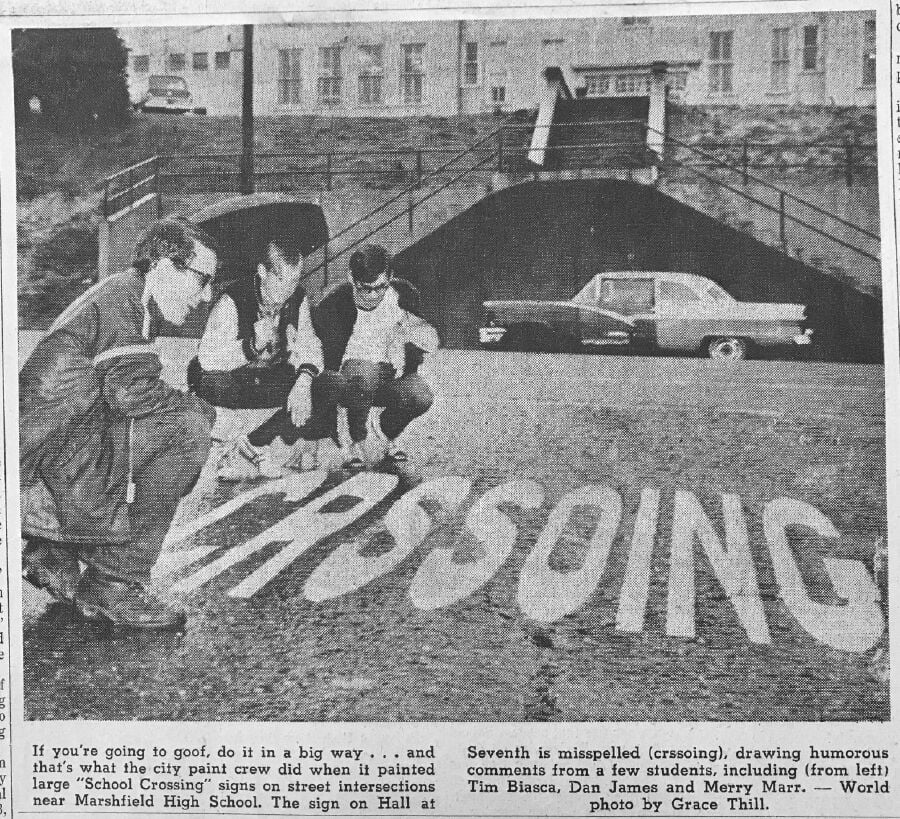 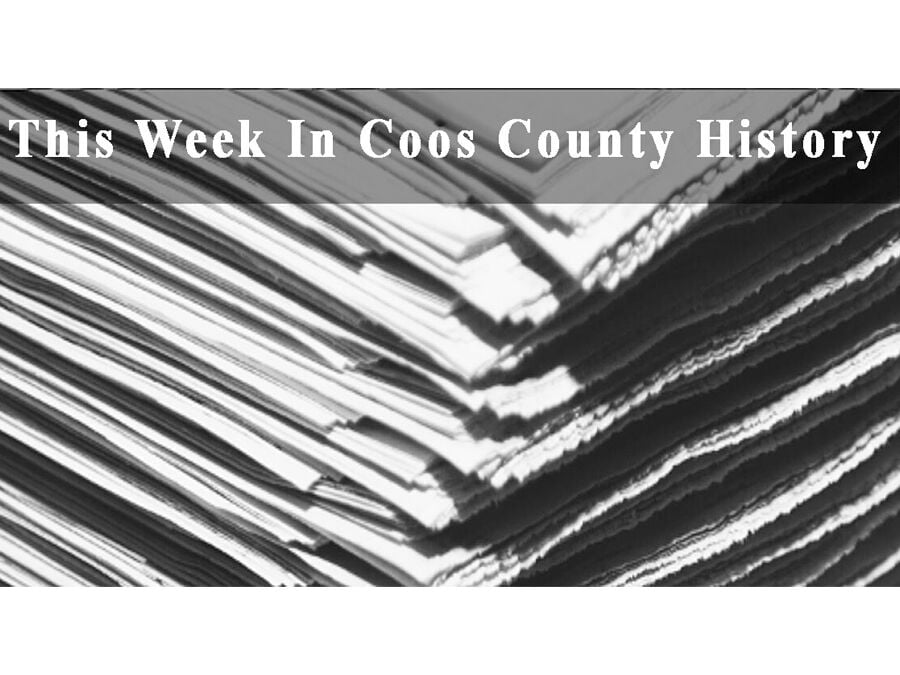 The Coos county court has appointed C.C. Williams of Coquille speed cop for the Coquille-Coos Bay highway. He has a motorcycle and will enforce traffic laws.

Cars going to Coquille which exceed the speed will be haled into Justice Stanley’s court there and those coming to the Bay will be haled before Justice Joehnk in Marshfield.

It is expected that Mr. Williams will also have charge of the enforcement of the regulations against heavily loaded auto trucks passing over the new paving. The exact limit is still in doubt but it is claimed by some that the paving will not stand up under loads of more than three tons, including the weight of the vehicle.

Other parts of the state respond — delegation at Washington wire encouragement

The quota for Marshfield to be raised for the relief of the starving in Ireland will probably have been completed by this evening. The amount to be raised in the county is $1500 and Marshfield’s share is $450.

“Quota for Deschutes county will be trebled when campaign finished.”

The following is copy of telegram received from Oregon Congressmen:

“Answering your telegram. We wish you every success in your efforts to raise funds to alleviate sufferings of starving women and children in Ireland. Our people have never failed to respond to appeals of humanity and will not fail in this instance.”

Will put Crater Lake on the map

Company formed to develop the park

WASHINGTON, April 8 — Stephen T. Mather, director of the national park service, when his attention was called to the organization of a company to put Crater Lake, Oregon, on the map, with every facility for comfort and enjoyment at this great national monument, was delighted and said everything possible will be done to co-operate with the Oregon men who have undertaken this task.

“Reports from H.M. Albright, superintendent of Yellowstone national park and field assistant to the director, on the results of the meetings in Portland under auspices of the Portland Chamber of Commerce, have greatly encouraged our efforts to have the Crater Lake national park take its proper place as one of the greatest tourist attractions in the United States,” said Mr. Mather today.

42 per cent kick in the extract

The trial of Otto Richter charged with selling intoxicating liquor has been set for Monday before Justice Joehnk. Richter who conducts a little grocery and cigar store on North Front street was arrested for selling vanilla extract. It was analized and found to contain 42 per cent alcohol.

The action was taken after Mike McCormick was taken into custody after having been drinking the extract and finally told where he got it. Richter denied that he had sold the extract. McCormick will probably be called as a witness against him. The officers say that several men about the city have been drinking vanilla extract excessively and that they will try to put a stop to it.

Increase in number of books taken out

At the monthly meeting of the Marshfield library board held this week, the librarian reported an excellent growth in the circulation of the library through the month of March. The total of 2581 books was circulated to Marshfield homes. This was about 553 more than the number sent out during the same month last year. The average daily circulation is about 100 books.

A story hour is held every Saturday morning at 11 o’clock. During the month, over 100 children took advantage of this opportunity to become familiar with the heroes of ancient folk lore.

SALEM (UPI) — Sen. Jason Boe, D-Reedsport, said Wednesday he is tired of being labeled a pollutor because he lives on the coast and “feels there can be a balance between economy and ecology.”

Boe spoke out during a hearing on coastal planning before the Senate State and Federal Affairs Committee.

A representative of the Oregon Environmental Council had accused the committee of attempting an “end run” around the Senate Environmental affairs committee which is considering bills of protection of Oregon estuaries.

Boe serves on both committees.

Boe suggested one estuary protection bill as originally proposed would have made the coast “an economic Appalachia.”

He said the bill under consideration Wednesday was “talking about an emphasis on balance.” Boe said “we’re trying to achieve a balance (between economics and ecology) where people can live on the coast.”

He said he resents persons “trying to make us look like pollutors.”

The bill in question, SB 687, was approved by the committee.

It would create an Oregon coastal conservation and development commission consisting of 26 members to study coastal natural resources.

But it will require close coordination among all levels of government, the report said, and will require some strict regulations on uses of the bay.

Also recommended is that a complete hydrological study of the bay be made.

The report was released in draft form by L.B. Day, regional coordinator for Interior Secretary Rogers Morton. It follows nearly a year of study by a number of federal agencies.

Gov. Tom McCall said of the report, “I am greatly impressed.”

The report was critical of the industrial development along the Coos Bay waterfront. It says onshore sewage facilities must be provided for ships to keep from polluting the water. New basins must be developed for ever-increasing super ships which can’t maneuver the present channels to the Coos Bay waterfront. No more dredge material should be piled in recreational areas of the bay, the report said, and harbor sprawl should be controlled.

It suggests a plan is needed to restore and reopen the Coos Bay waterfront, from North Bend to Coos Bay.

What is vitally needed, the report said, is that federal, state, and local governments generate, coordinate, and put into action a management plan for the bay.

A special North Bend door-to-door city census conducted in March showed an increase of 74 persons over figures reported previously by the 1970 federal census, according to City Administrator Jack Isadore.

The new census was made March 22 through March 25 by the Portland State University Center for Population Research and Census.

The city administrator said North Bend will gain $21 per capita in-lieu taxes for every new person counted. Total gain for the city by having the new census is $1,554 during the year in gas, liquor and cigarette tax refunds, all paid to cities on the basis of population.

Earlier in the year the city of Eastside conducted its own count and gained 136 people over the federal census count.

Isadore said 26 other cities in Oregon are conducting their own census because they believe the federal count to be short, and that new figures will qualify the state for another seat in Congress.

Paying too much for trash: Officials talk about implications if disposal site closes, effects on businesses and possible revenues

The meeting was called after Coos Bay City Manager Bill Grile announced the city could reduce its garbage prices by $2.25 per can if all the city’s trash were shipped to a landfill outside of Coos County rather than to the Beaver Hill facility.

Grile said some of the city’s construction waste is already being trucked to the Coffin Butte landfill north of Corvallis by Les’ Sanitary Service for $48 per ton. According to Grile, Coffin Butte can offer reduced rated due to the size of the facility.

The Beaver Hill site charges $72.60 for every ton of garbage.

The commissioners said shipping all of Coos County’s residents’ garbage to a landfill outside the county could put the Beaver Hill facility out of business and lead to costly closure fees and the loss of county jobs. Such a shutdown also could have adverse effects on businesses within the county.

The roots of peace

BROOKINGS — This tiny tree’s roots run deep, spreading through imposing forests, out across the Pacific, down through time.

Though it’s little more than 4 feet tall and 9 years old, a spasely-limbed coastal redwood hiding amidst the shadows in the Siskiyou Mountains 20 miles east of Brookings has a remarkable story to tell.

Now, that story has been recognized as an indelible part of Oregon’s history.

In a ceremony Saturday, the Bombsite Redwood was dedicated as an Oregon Heritage Tree, becoming the smallest, and youngest tree to receive such a distinction. The lone sapling planted by the only man to ever drop bombs on the American mainland during wartime is now one of 18 Oregon Heritage Trees, including a cherry tree planted in Eugene by the city’s founder, a hickory that grew from nuts settlers gathered along the Oregon Trail and the world’s largest-diameter ponderosa pine.

Nobua Fujita planted the Bombsite Redwood in 1992 at the remote location on Wheeler Ridge scorched on Sept. 9, 1942, by incendiary bombs dropped from his single-engine seaplane. The attack was one of two daring pre-dawn bombing missions launched from I-25, the large Japanese submarine that lurked off Oregon’s coast the summer and fall of 1942, shelling and sinking Allied vessels. Three of the four 170-pound bombs Fujita and his spotter, Shoji Okuda, dropped on Wheeler Ridge and another location near Port Orford failed to explode and only superficial damage was caused by the one that did, as unseasonably damp conditions negated the fire danger.

What will redistricting mean for the South Coast?

They shop at the same businesses, live in the same neighborhoods and drive the same roads.

So, what sets Glasgow, Charleston and Eastside residents apart from the rest of the Bay Area?

The three communities form the epicenter of a debate on how to redraw the lines that break the South Coast’s two legislative districts. While House District 47 encompasses most of the Bay Area north to Florence, District 48 runs form the Oregon-California border, through Curry County and around a peanut-shaped segment of the Bay Area.

As the Oregon Legislature prepares to redraw the legislative and congressional districts’ boundaries, many attending a Senate and House redistricting committee hearing in Coos Bay on Friday said now is the opportunity to include the communities into House District 47.

“We share the same hospital, the same airport, the same port, shipping channel, rail bridge, the same ESD, college and we should be represented by the same state representative,” said Glasgow resident Jan Willis, who works for the city of North Bend.

It’s about keeping communities of interest together. It’s only logical, advocates said.

Coos County Clerk Terri Turi said the election process has been made more difficult because of the quirky break. During the 2000 general election, Turi said the Elections Office received numerous phone calls from residents in Glasgow, Charleston and Eastside who believed they received the wrong ballots because they couldn’t vote for a candidate in the District 47 race.

The residents were sent the correct ballots, but many didn’t understand they are part of District 48.