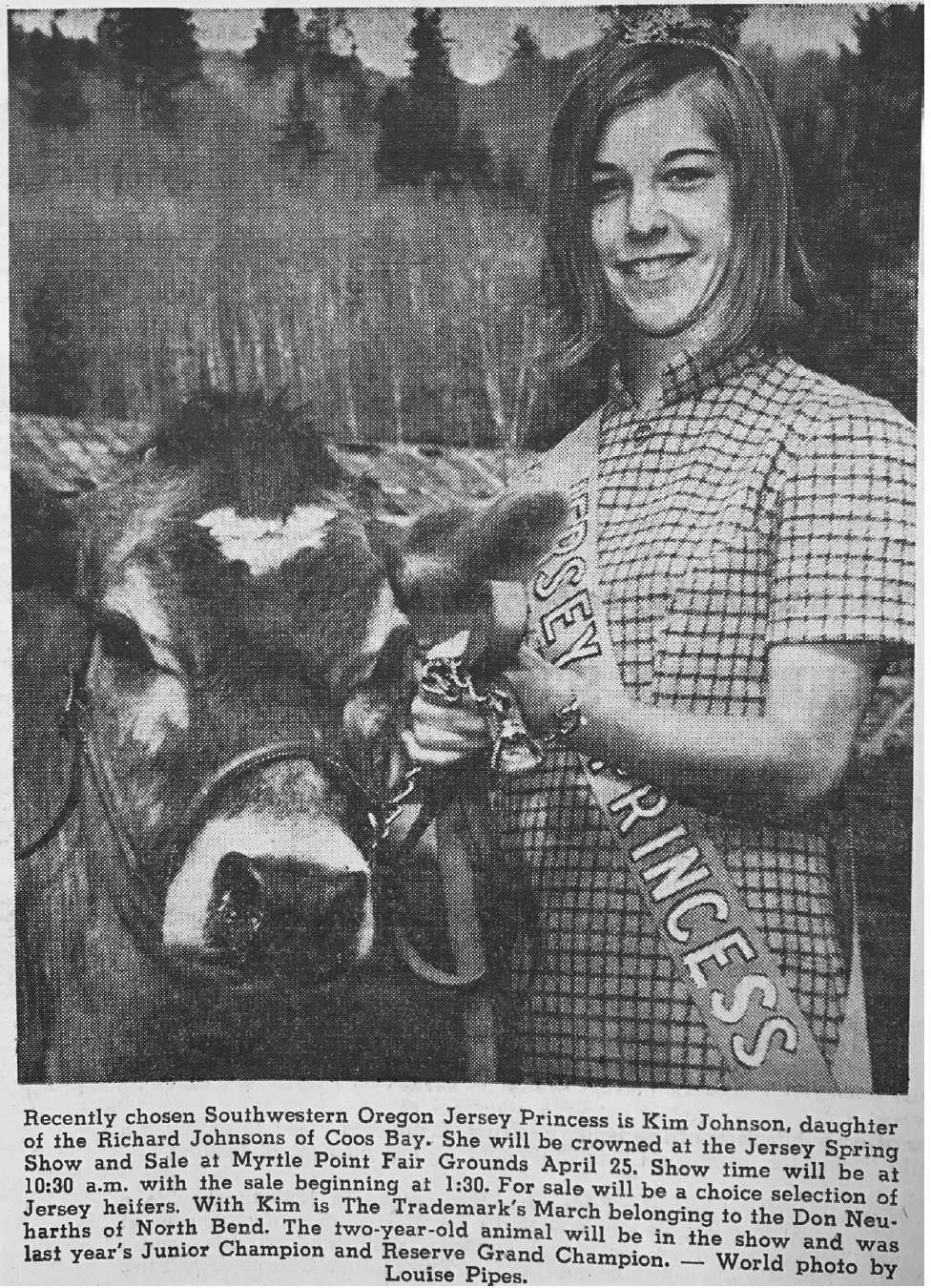 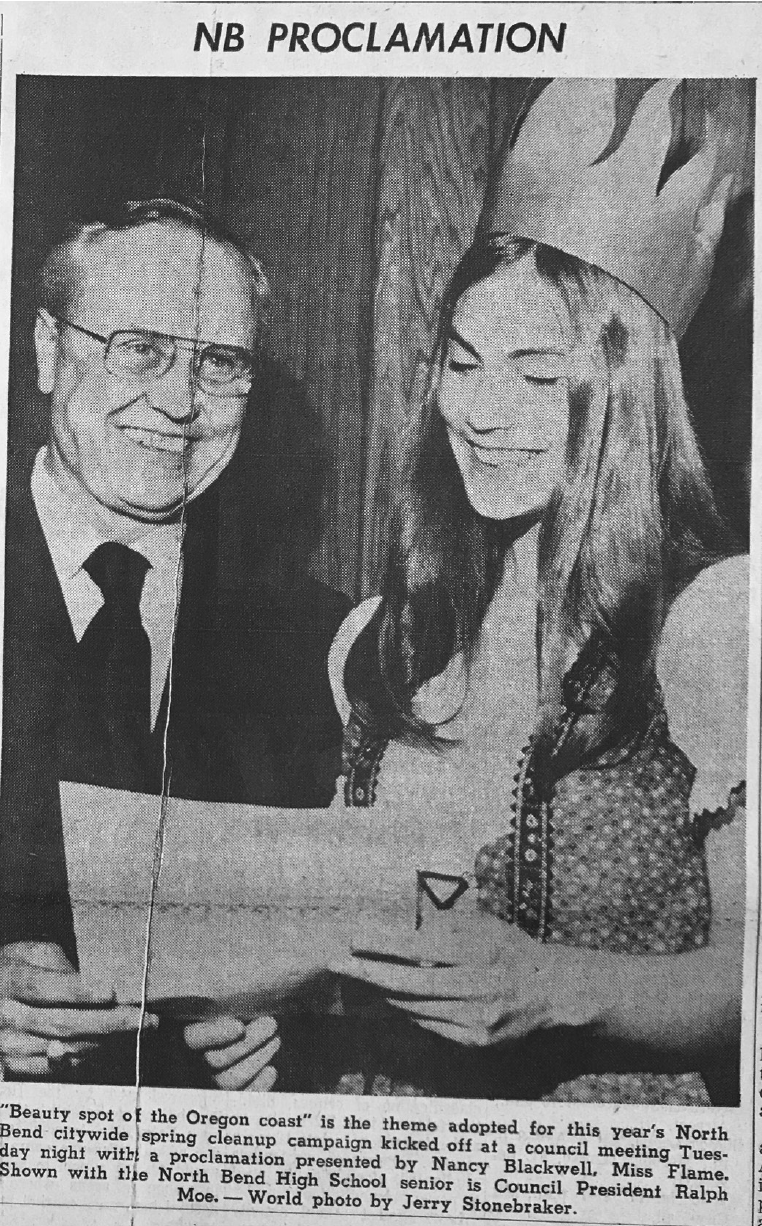 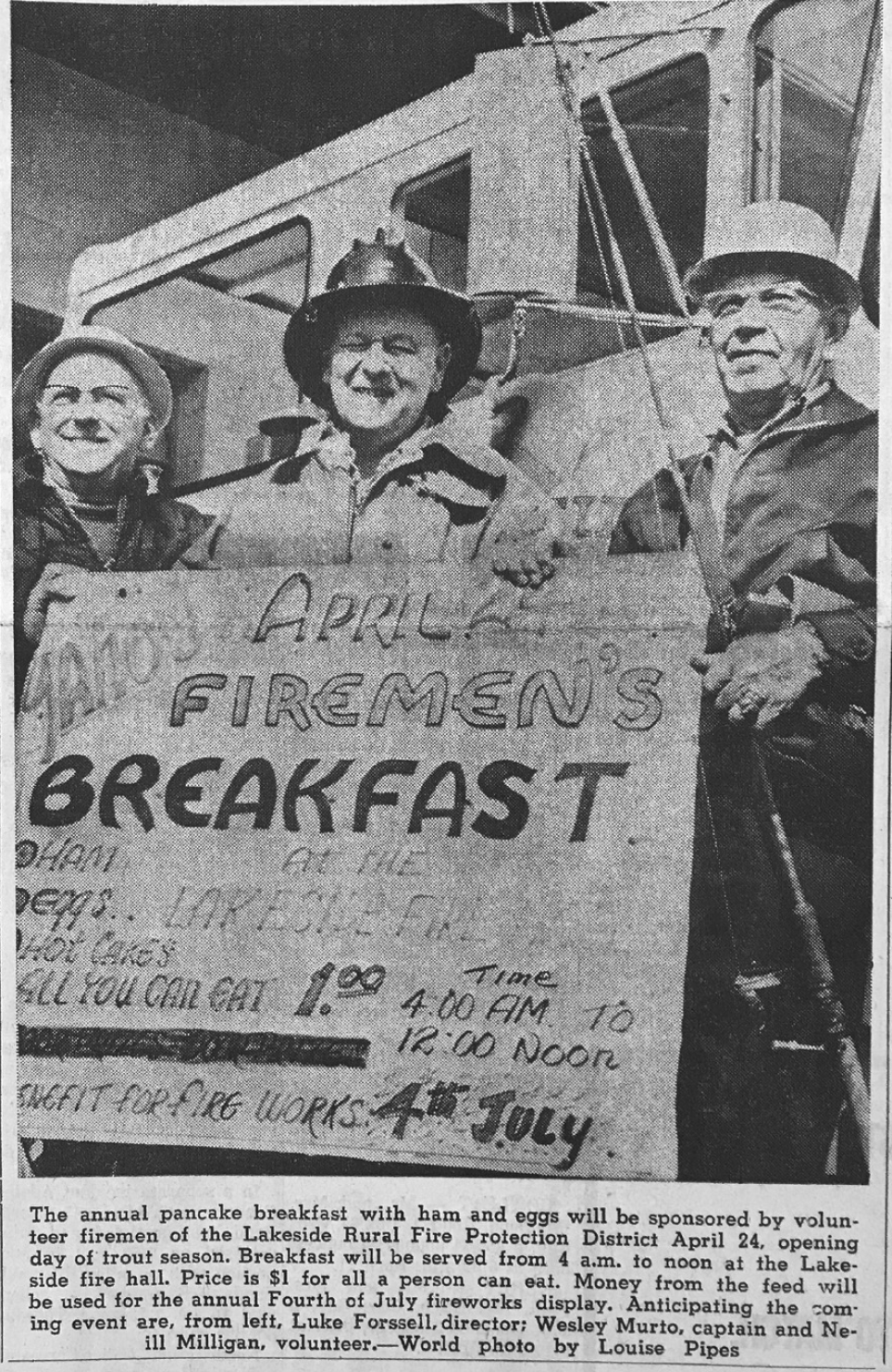 North Bend to have new school

Board holds meeting to discuss plans

The North Bend high school board held a meeting last night when the public was invited to attend to hear the plans for the erection of a new building at the high school grounds. The intention was to let the public discuss the proposition, but as only seven aside from the board were present the board members took it to mean that the public wanted them to decide, so they went ahead with the plans.

A committee composed of George Mandigo, L.N. Gilnett and C.A.Smith went to Coquille this afternoon to look after the school there. The cost has not yet been estimated but it is planned to build a four-room structure for the junior high school to be located on the high school grounds.

Gun Clubs will have 2 contests

The Marshfield and Coquille Gun Clubs have arranged for two competitive shoots, the first at the Coquille traps next Sunday and the second at the Marshfield grounds a week later.

L.L. Thomas received word today that the Coquille Gun Club members would have autos at Cunningham next Sunday at 10 o’clock to take the Marshfield members to the grounds. Coquille will furnish lunch. It is expected that a set will be shot before lunch and another after lunch.

Will be awarded for best bookplate for library

Part of the Nancy Noble bequest will be used for this purpose, it is announced

Mrs. Nancy Noble, who died about a year ago, generously remembered the Marshfield public library in her will. The library directors have decided to use a portion of that bequest for a prize to the students of the Marshfield high school art classes who devises the best bookplate for use in the public library. The prize is to be given at commencement.

At a meeting of the industrial committee of the Marshfield Chamber of Commerce, a campaign to secure the starting of ten or a dozen small factories on Coos Bay this summer was launched. The committee consists of Ben S. Fisher, B.B. Ostlind and E.W. McInturff, and W.A. Reid and J.S. Lyons met with them.

Instead of waiting for bigger concerns, it was decided that the efforts should be started on the small ones and aiding them. H.C. DIers was engaged to make an industrial survey of this section, listing all present factories, enumerating suggestions for expansion, raw materials and suggestions for manufacturing possibilities. All data of importance is starting new concerns will be compiled.

In going over the matter, the following were enumerated as propositions that the Chamber of Commerce might assist in getting started.

Tannery project which is being projected by J. Gildensheim and others.

Opening of new coal mines and briquetting plant, Geo. Doll being interested in the latter.

It was reported that the Coos Canning Co. was still working on its project for a fruit and vegetable cannery here.

The Coos Bay Chapter of the D.A.R. has just received a handsome bronze memorial tablet which will be placed in the Marshfield Armory building as a tribute to the more than 600 Coos county men who served their country in the world war.

The bronze tablet is described as a handsome piece, five feet long and four feet wide. It will be set in as a panel in the room in the armory building which has been set aside for the D.A.R. It will be the center and around it will be an artistic setting of Oregon woods.

The tablet cost $350. In addition to this, the Chapter is paying for the plastering and finishing of the room.

As soon as the tablet, which is properly inscribed, is placed arrangements will be made for the dedication in which the State Regent of the D.A.R. will take part. It had been first suggested to have the names of all the Coos County men in the World War inscribed but it was impossible to get an accurate list.

In the Coos county oratorical contest which was held at the Marshfield high school last night Miss Veola Johnson of Marshfield won the girls cup and Gunnar Anderson of North Bend the boys cup.

There were contestants from each school in the county chosen by contest. The selections were all well given and prizes were awarded to the two mentioned. Miss Johnson gave a dramatic reading entitled: “The Soft Spot in B-606,” a story of a convict. Gunnar Anderson’s subject was “Patrick Henry, the Agitator.”

SALEM — Opponents of sex education in public schools testified Thursday that young children are being harmed, not helped by sex and drug education classes.

The testimony before the Senate Education Committee was in support of a bill that would prohibit schools from offering sex education or family life courses.

Mrs. Mary Kangas, Scappoose, representing the Association for Basic Curriculum said the result of teaching young children and they should not do with sex and drugs is that they go out and experiment in those very areas.

Rather than being good for school age children, she said, the family life courses are “perverting them.”

Alton Johnson, Portland, told the committee that when sex education programs were first begun their advogates promised there would be a resultant decline in venereal disease, illegitimate pregnancies and divorce. But just the opposite has happened, he said.

Students at North Bend High School begin Monday to select classes that will take next year under a new system which gives more freedom of choice, including new vocational programs, but still provides a traditionally solid educational background.

The principal, Dr. Jim D. Stuckey, emphasized that the large number of electives gives each student more responsibility for exercising self-discipline as goals are examined and decisions are made for the coming year’s study.

The high school will go next year from the present 55-minute six-period day to seven periods of 50 minutes each.

Purpose of re-scheduling the school day at North Bend High School is to give a diversified choice of subjects and to allow flexibility in scheduling so that some “career clusters” can be included.

Neglected tennis courts behind Sunset Middle School will be transformed this summer into a place where children can play basketball, soccer and hockey safe from nature’s elements.

The area where the school’s tennis court is located is undeveloped and has a deteriorating asphalt playground, Mulkey said.

It will be replaced by the Sports Park that will have an open-sided 90-foot by 200-feet covered area that houses a roller-blading hockey rink, four full-sized basketball courts, a tennis court, volleyball courts and an indoor soccer court.

The committee also expects the structure to be used for activities such as community fairs, concerts and after-school programs.

New life and dozens of new jobs may soon be injected into a long-dormant shopping center in downtown Coos Bay.

Eugene-based Bi-Mart Corp. is closing in on a deal to acquire the Plaza, a property located on the corner of Elrod Avenue and Fourth Street, that was home to a Safeway grocery store and several shops before  the last business closed its doors three years ago.

While final terms of the sale are under negotiation, according to Dick Handsaker, BI-Mart’s director of real estate and construction, the company is “under contract in downtown Coos Bay.”

Opening a 30,000 square-foot membership discount store in Coos Bay would not affect the Bi-Mart store already operating in North Bend, nor would it signal a shift in the company’s interest in acquiring the old Georgia-Pacific mill site in Coquille, according to Don Leber, Bi-Mart’s director of advertising.

“We’d still like to have a store in Coquille and our store in North Bend,” he said. “This would be an additional store.”

The show, held in Coos Bay’s downtown outdoor mall, had hands-on displays featuring instructions on making drums out of coffee cans, string and leather-like fabric; and preparing doughnuts on a camp cook stove. Participating Scouts got to cross a monkey bridge made out of rope, run obstacle courses and even watch some of the local skateboarding venture group members in action doing tricks off a ramp they had built.

“This is all part of scouting,” said Brent Harty, executive director of the Boy Scouts of America’s Chinook District and Wacoma District in Curry County. “This shows off a lot of the different activities we have. Boy Scouts is more than just camping.”

The Scout Show gives the organization troops and packs, explorer groups and venturing groups a chance to show off their skills and what they are doing in the community. The show is also a good way to raise people’s awareness about the organization.”

Track and field: Meet has good start with some individual standouts

With athletes from just six schools competing, the first-ever Prefontaine Coast Invitational at Marshfield High School on Saturday didn’t have the feel of a big track meet.

But that didn’t stop some of the athletes from putting up some pretty good marks under sunny skies in the very first version of the event to honor the late Marshfield great Steve Prevontaine.

“For the first time running a meet, it was pretty good,” said Marshfield coach Steve Pennington. “The kids had some real good performances.”

No team scores were kept as athletes from Marshfield, North Bend, Bandon, Myrtle Point, Mazama and Eureka, Calif., took part in the meet.

Oregon fishermen and processing companies are blaming international competition flooding the West Coast shrimp market for undercutting prices and producing one of the worst seasons in years.

“It’s abysmal,” said Steve Jones, a pink shrimp biologist for the Oregon Department of Fish & Wildlife in Newport, about the 25-cents per pound price.

“It just looks kind of grim right now. A lot of boats don’t have another fishery to go into and everybody’s getting the trips in that they can but they’re unsure what the prices are going to hold in store for them next week,” Jones said.

The seven-month season opened April 1 and Jones said about 150 permits for shrimp were issued in the state. Not everyone with a permit fishes for shrimp.

“There are a lot of permits out there that go unused each year,” he said.

In Charleston, Harbormaster Don Yost said approximately 20 boats are equipped to fish for shrimp. Most, he said, haven’t been heading to see.

Scott Adams, plant manager for Hallmark Fisheries, said only about two boats are shrimping from Charleston but his plant isn’t currently buying any product from the harbor. Adams said Hallmark has lost money on shrimp since May and is re-evaluating the fishery.