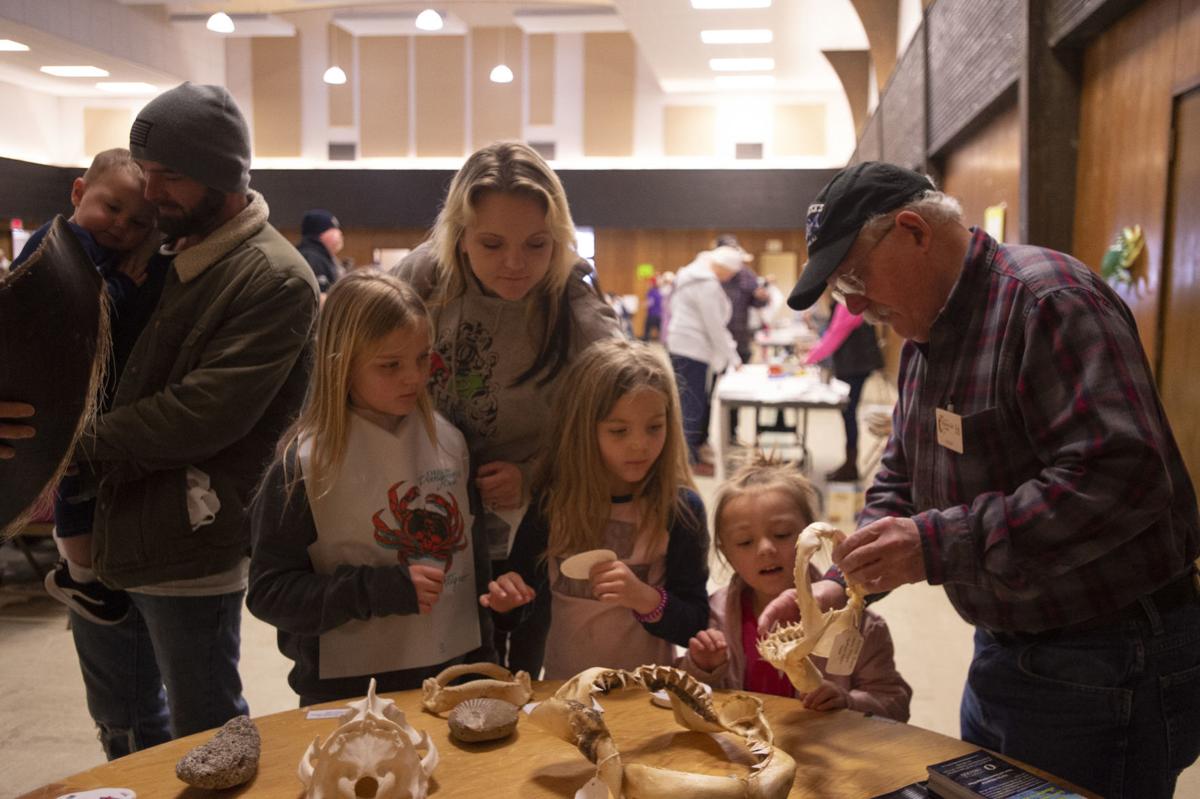 A family gets a marine biology lesson Saturday during the annual Charleston Crab Feed at the North Bend Community Center. 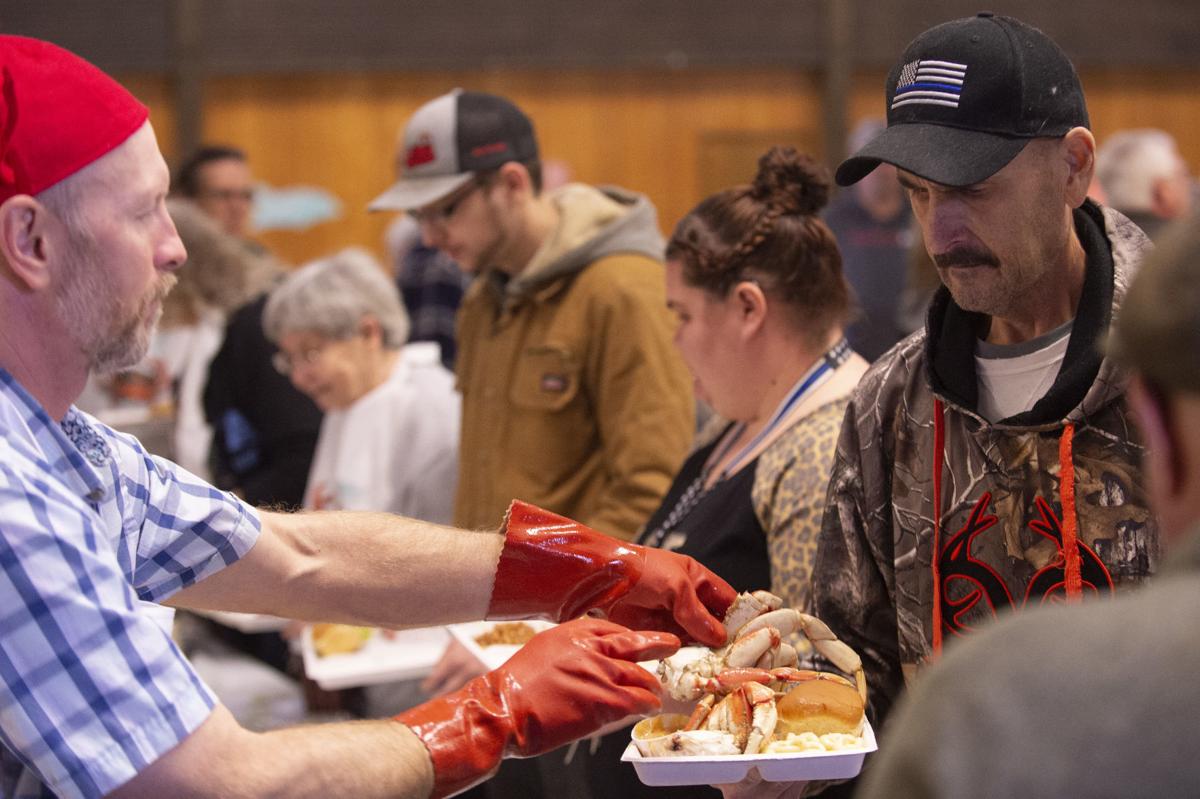 Volunteers serve a long line of attendees Saturday during the annual Charleston Crab Feed at the North Bend Community Center. 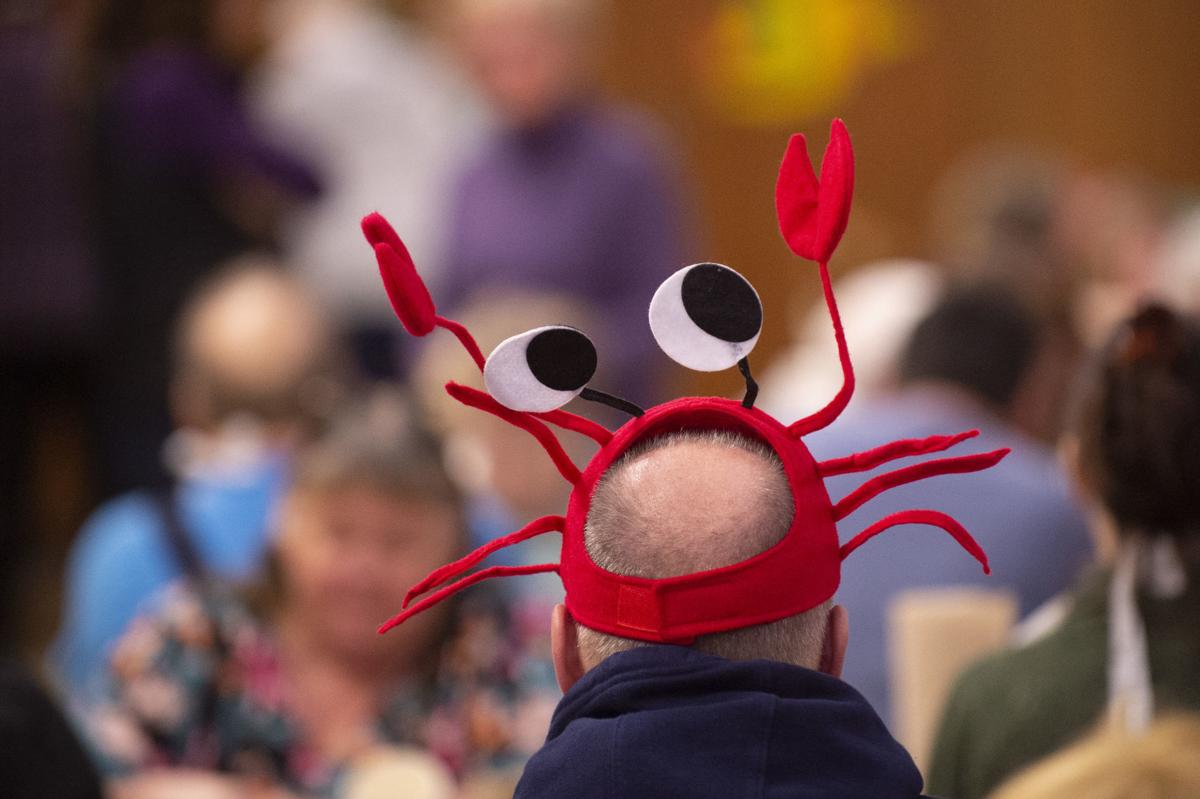 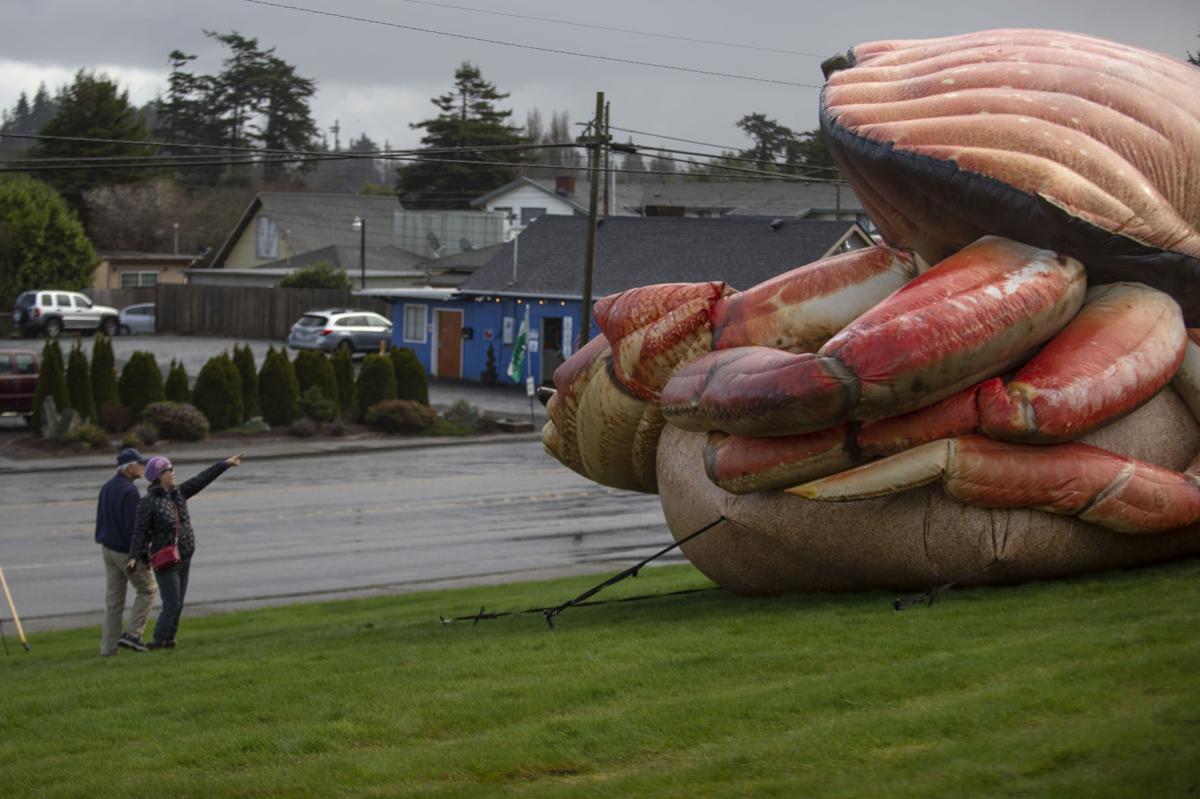 People marvel over the inflatable crab Saturday outside of the North Bend Community Center during the annual Charleston Crab Feed.

For many folks around the community as well as those visiting from outside Coos County, the yearly event is one they cannot miss, said Margery Whitmer, an event organizer and board member with the Charleston Merchants Association.

Volunteers serve a long line of attendees Saturday during the annual Charleston Crab Feed at the North Bend Community Center.

“It’s sort of a South Coast tradition for a lot of people,” said Whitmer. “We have people from Medford, Grants Pass, California and Washington who come out to visit us each year.”

The crab feed, which doubles as a fundraiser for the Charleston Visitor Center, has for 36 years celebrated the local Charleston community as well as the countless commercial fishermen who each year supply the event with freshly caught Oregon Dungeness crab.

This year, the event featured approximately 900 pounds of crab. According to Whitmer, more than 30 people volunteered to help operate and organize the event, some of whom included football players and Key Club members from North Bend High School as well as students from the Marshfield High School Key Club.

A number of local businesses also donated a variety of prizes to be included in this year’s raffle drawing, Whitmer said. All the proceeds collected Saturday will go toward operation costs of the Charleston Visitors Center which typically opens from May to October, she added.

“It just makes me so happy to see everyone together having a good time,” she said. “I want people to walk away with the experience of enjoying the fresh crab and hopefully staying the whole weekend to see what our area has to offer.”

In December, the Oregon Department of Fish and Wildlife once again delayed opening the crabbing season after discovering low meat recovery rates in about half of the state’s harvest areas. As meat quality improved, fishermen were finally able to set their gear on Dec. 28 and later pull their pots on Dec. 31.

According to Oregon Dungeness Crab Commission spokesman Tim Novotny, so far fishermen throughout the state have brought in an estimated 13 million pounds of crab despite the late start and poor weather conditions.

“We’re a little higher than maybe some had anticipated,” said Novotny. "From what people have been telling us, they were expecting this to be one of the down years, so to get to 13 million in the first month was kind of a pleasant surprise and we’re not done yet.”

Novotny also addressed concerns brought up in a recent study published by the National Oceanic and Atmospheric Administration which found signs of ocean acidification damaging and thinning the shells of young Dungeness crab off the West Coast.

Novotny said there appears to be no damage to this year’s crab harvests. Looking to the future, he said the Crab Commission will continue to support research efforts to learn more about ocean acidification and its impacts on Oregon’s Dungeness crab.

Last year’s crab season brought in $66.7 million, the second highest grossing season on record, with 18.7 million pounds landed, according to a harvest summary completed by ODFW. Currently, the average price per pound for crab on the Oregon Coast is about $3.48, which is higher than the previous season’s starting prices, said Novotny.

People marvel over the inflatable crab Saturday outside of the North Bend Community Center during the annual Charleston Crab Feed.

Saturday’s crab feed also featured a dessert sale with homemade pastries provided by the Coos Head Garden Club. The Charleston Merchants Association and the Wild Women of Charleston also participated in this year’s event, as well as a number of other local businesses and organizations.

“(The crab feed) is basically a celebration of our Oregon Dungeness crab fisherman and the relationship we have with our port communities,” said Novotny. “We are dependent on them like they are dependent on us.”

“We bring great food and more than that we bring great economic benefits to these coastal economies and in return they show us love by enjoying our product, coming out and thanking us, following what we do and sending us a lot of love and prayers during the season.”

For the third time in recent months, Suicide Prevention Training came to The Mill Casino-Hotel but with a new focus on helping veterans.

Receive the latest on local and national politics in your inbox weekly!

Fall in love with Local News! Join for $3