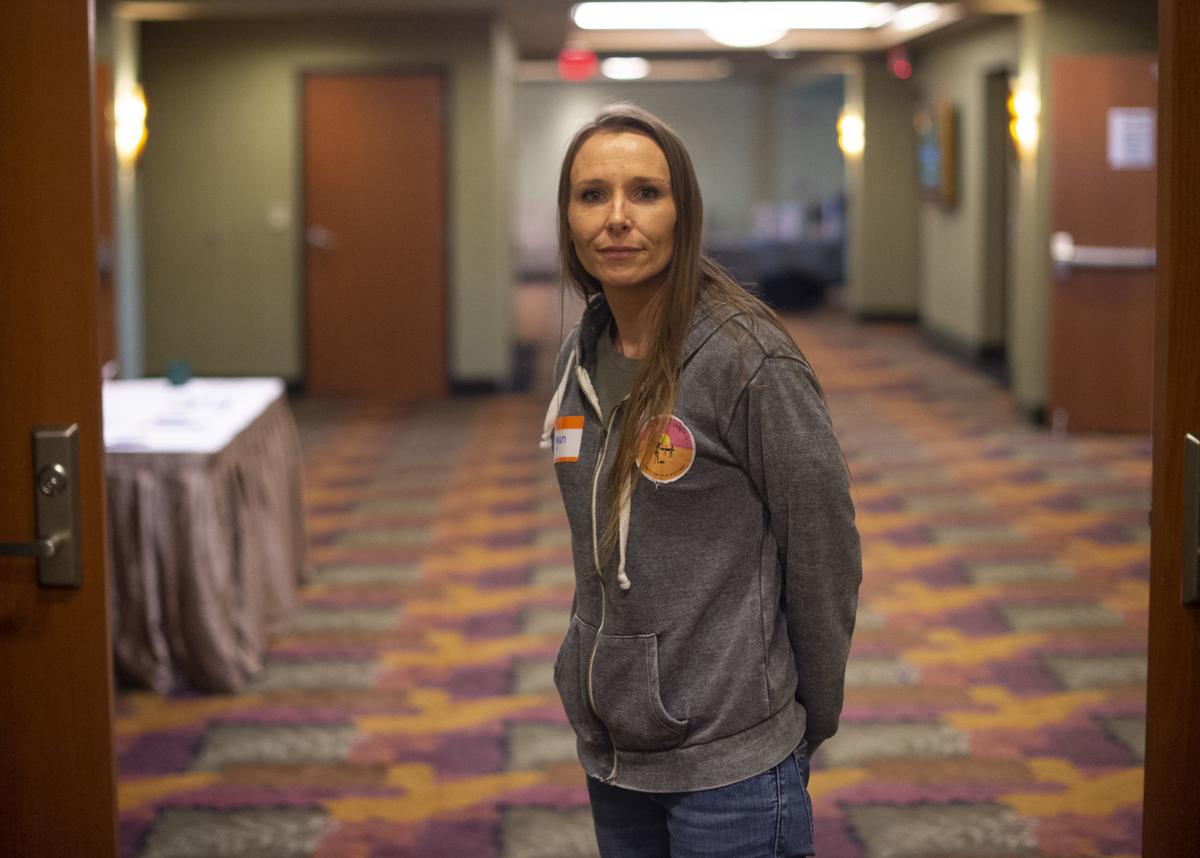 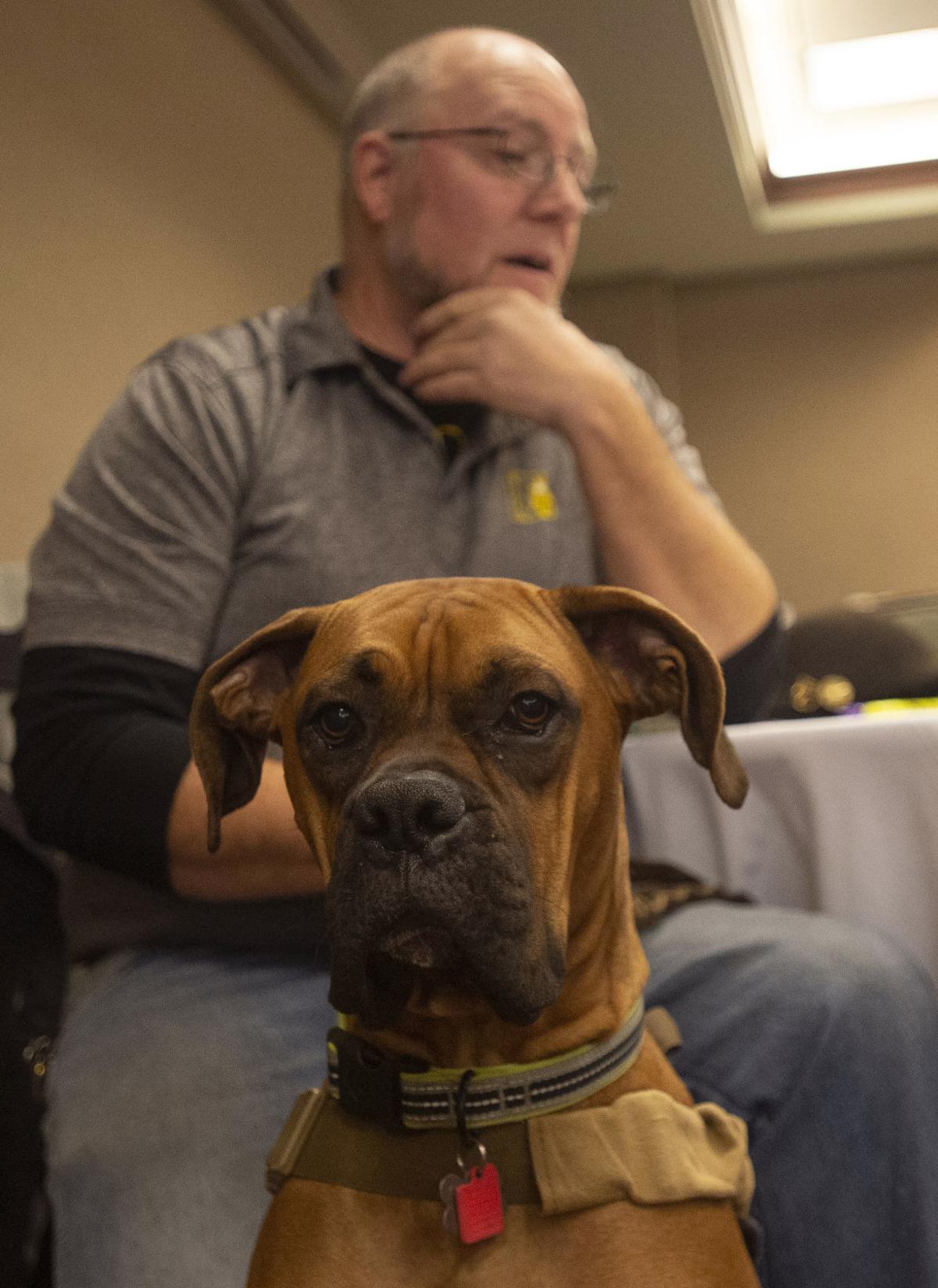 Dennis Chouquette, a retired U.S. Navy and Army National Guard veteran, talks Tuesday as he sits with his service dog, Diesel, during a Suicide Prevention Training at the Mill Casino and Hotel on Thursday.

Dennis Chouquette, a retired U.S. Navy and Army National Guard veteran, talks Tuesday as he sits with his service dog, Diesel, during a Suicide Prevention Training at the Mill Casino and Hotel on Thursday.

NORTH BEND — For the third time in recent months, Suicide Prevention Training came to The Mill Casino-Hotel but with a new focus on helping veterans.

“The real sad part of having gone to war with these people is coming home and losing the battle,” said Megan Bailey, retired U.S. Army veteran and one of two veteran speakers during the training lunch forum on Thursday, Feb. 6.

The training was put together by Coos Health & Wellness and Oregon Department of Veterans' Affairs, having begun as a way to tackle the mental health crisis. The trainings teach the public how to identify signs of suicide and then how to say something before it’s too late. Since the trainings began last year, a total of 300 people in the community have been taught the three basic steps to helping save a life. Those steps are “Question, Persuade, and Refer.”

“When we started (the trainings), it was about getting community partners involved,” said Eric Gleason, health care integration and promotion director with Coos Health & Wellness. “After a few of them, we wanted to dive down to certain populations and veterans was one of those populations … When you do that, you can talk about what affects them individually. Veterans are very particular in how they want to communicate with people so we wanted to give them a more tailored approach.”

At the Thursday event, local resources set up tables to spread information on what is available, including Operation Rebuild Hope, which is a nonprofit that helps veterans and homeless veterans in need.

“Veterans are trained to not show weakness, so that is one thing we want to raise awareness for and say that it is okay to ask for help,” said William Wasson, suicide prevention coordinator with the VA.

In the past three suicide prevention trainings that Coos Health and Wellness and the Oregon Department of Veterans' Affairs held, there were only two training sessions in one day for two separate groups. At Thursday’s event, the organizations added a lunch forum where two veterans discussed their personal stories of struggle.

Gleason, who is also a veteran, explained that it is most impactful to have someone explain what it was like to be at the lowest point in their lives to show that people aren’t alone.

Dennis Chouquette, retired U.S. Navy and Army National Guard veteran, was the second forum speaker of the day and said he started spiraling four years ago before family and friends forced him to get help at the annual Veterans Stand Down.

By Thursday afternoon, Chouquette had already gone through the suicide prevention training and said it opened his eyes to many things he went through without realizing it.

“I was homeless, living out of a car or the basement of a friend,” he remembered. “I got to the point where my son found me sitting on the porch in the freezing cold and crying.”

It was after his son found him that night when he was made to attend the Veterans Stand Down to get help. From there, he connected with Coos Health & Wellness and went on to be diagnosed with PTSD.

“I wanted to say that at the time I wasn’t having suicidal thoughts,” Chouquette said. “To me, I wasn’t planning to kill myself. I was planning on letting myself waste away. People need to realize it isn’t about putting a gun to your head or taking pills, it is also locking yourself away from society and wasting away.”

Chouquette pointed out how veterans are often the ones who don’t reach out for help with these issues because, “There is a ‘buck it up, buttercup' mentality where they fought for their country and don’t need help but unfortunately they probably need more help than others.’”

“In general, people dealing with suicide have the feelings that you don’t belong or that you’re a burden to others,” Wasson said. “But for veterans, what increases their risk is their length of deployment, number of deployments, military sexual trauma, combat, traumatic brain injury and chronic pain.”

For Bailey, another forum speaker from Thursday’s event, she had also gone through one of the trainings and highlighted the low-key indicators she learned.

“People who are suicidal speak up in one way or another, not always that they want to kill themselves but instead that life is heavy or really simple things,” Bailey said. “But if you know what you’re looking for, you can pick up on it nine or 10 times in a conversation. This training taught what to look for and how to start the conversation ....”

Recently, Bailey lost a close friend who committed suicide. She decided to be a speaker at the training because. “I can’t sit down quietly in my home.”

“My friend was always the one who reached out and checked on people,” she said. “If I had training prior to that, it would have been an indicator. It’s our job to not let that happen anymore. We need to talk to one another and care about each other. It is life changing and sometimes life-saving.”

“Amid deeply troubling statistics about suicide in Oregon and nationwide, Wyden has been a long-time advocate of setting aside a three-digit number for people facing a mental health crisis and considering suicide,” the release said.

“Suicide is a public health crisis and requires this urgent step of building upon the successful use of a recognized three-digit 9-1-1 number for emergencies,” Wyden said in the release. “Designating a three-digit 9-8-8 number for people in a mental health crisis or thinking about suicide is a crucial piece of the targeted response that’s needed to save lives in Oregon and nationwide.”

The National Suicide Hotline Designation Act was introduced by Sens. Tammy Baldwin, D-Wis., and Cory Gardner, R-Colo., and follows a Federal Communications Commission recommendation in August that a 9-8-8 number would help with mental health and suicide prevention access, the release said.

For Gleason and Wasson, the news was exciting.

“The three digits makes it so much easier to ask for help,” Gleason said, then pointed to the existing crisis line and explained that having a long number means people in a crisis might not have the patience to look it up and then go through the menu options to ask for help. “We need to make it as simple as that to say ‘help me.’”

Wasson added that having those three numbers will “make people safer to have something more accessible they can memorize.”

If you are a veteran struggling with suicidal thoughts, call the Veterans Crisis Line/Military Crisis Line at 1-800-273-8255 and press 1.

Hundreds of people gathered at the North Bend Community Center with eating utensils and crab bibs to celebrate the 36th annual “Crack Up” Charleston Crab Feed.