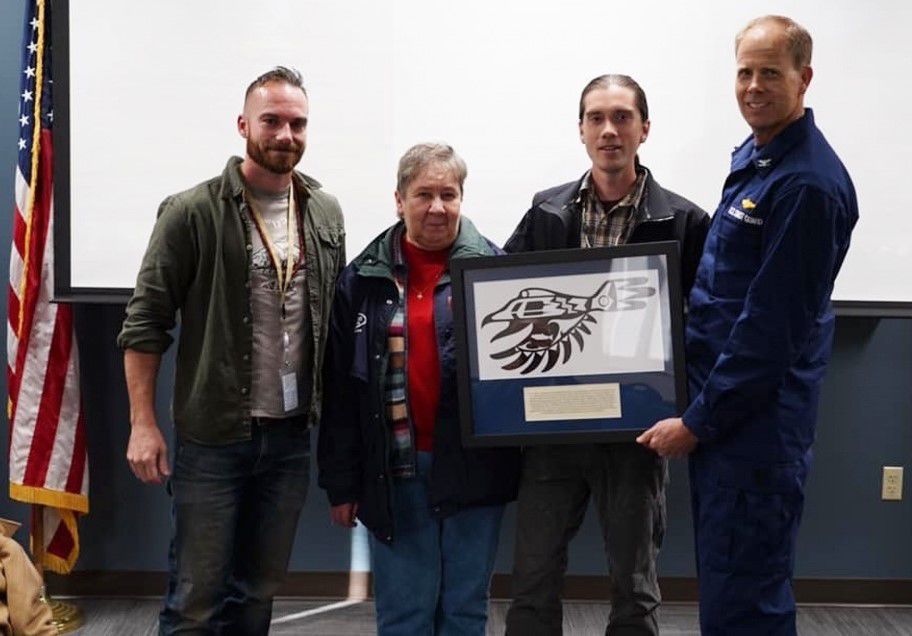 Leaders from the Confederated Tribes of Coos, Lower Umpqua and Siuslaw Indians are presented with a commemorative plaque by Capt. Olav Saboe, right, the commanding officer of Coast Guard Sector North Bend, in North Bend on Nov. 22. The artwork was designed and created jointly to pay tribute to the cultural heritage of the native peoples of Southern Oregon.

The artwork to be placed on the tail of an MH-65 Dolphin helicopter at Coast Guard Sector North Bend. The thunderbird design incorporates patterns and designs representative of the Confederated Tribes of Coos, Lower Umpqua and Siuslaw Indians. 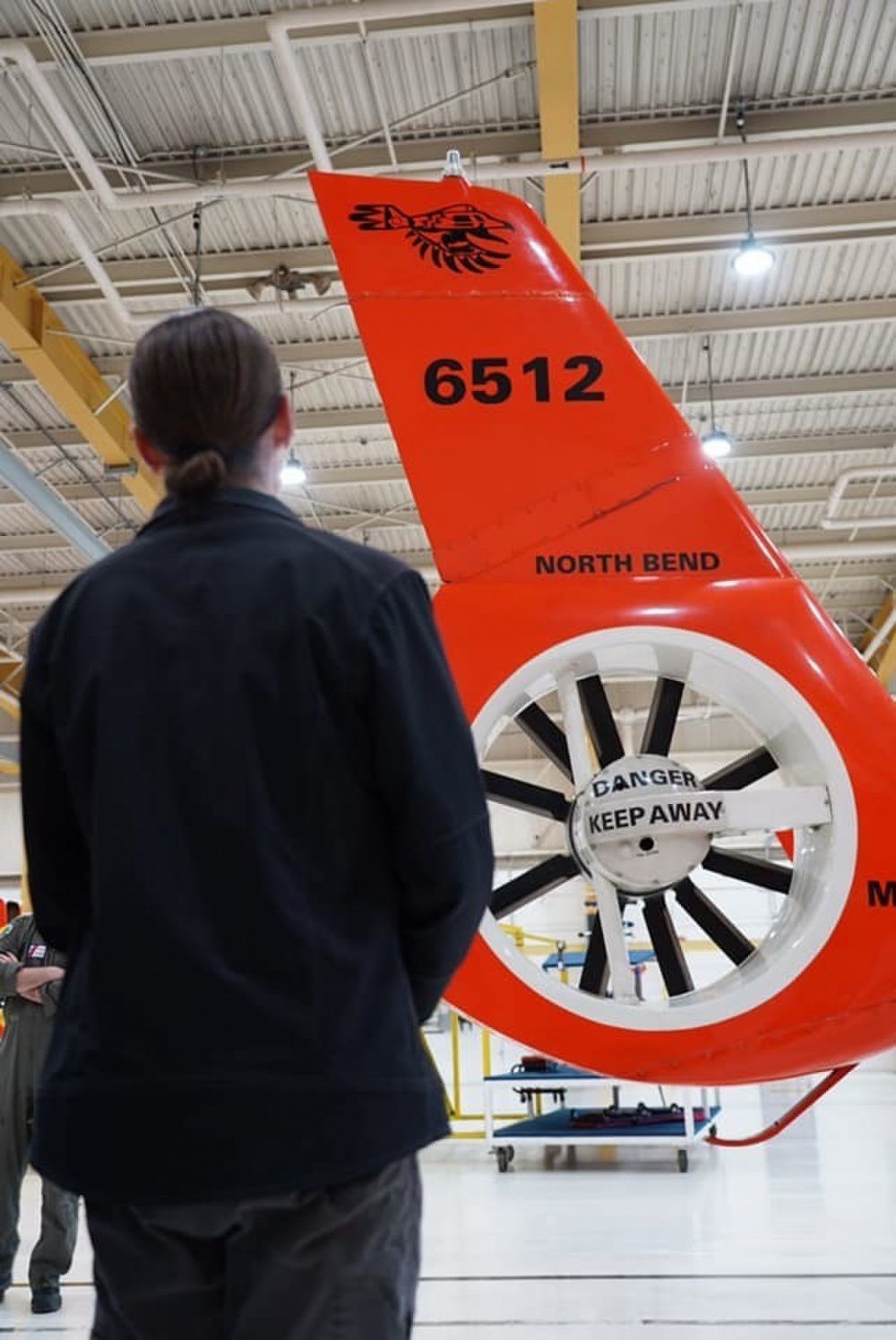 A member of the Confederated Tribes of Coos, Lower Umpqua and Siuslaw Indians, looks up at the new tail art on an MH-65 Dolphin helicopter at Coast Guard Sector North Bend. The tail art was designed to incorporate traditional tribal references in honor of the cultural heritage of the communities in which the Coast Guard members serve.

NORTH BEND — Southern Oregon has been home to tribal nations of Native Americans long before America became known as "the land of the free and the home of the brave."

In honor of Native American Heritage Awareness this past November, the command of Coast Guard Sector North Bend adorned the MH-65 Dolphin rescue helicopters with original artwork modeled after cultural references from the confederation of local tribal nations, according to a press release from the U.S. Coast Guard 13th District PA Detachment Astoria.

The artwork to be placed on the tail of an MH-65 Dolphin helicopter at Coast Guard Sector North Bend. The thunderbird design incorporates patt…

To symbolize the close partnership and respect between the groups, the Thunderbird was designed jointly between the Confederated Tribes of Coos, Lower Umpqua, and Siuslaw Indians and the 13th Coast Guard District.

In traditional tribal stories, the Thunderbird was father of the ocean, father of the food, giver of the tides and bringer of the storms. His favorite people were the Salmon People.

If the Salmon People, or any other water peoples, were shown disrespect, then fishing could suffer, great storms could form, or tsunamis could strike.

The "salmon with waves" in the wing of the design, references a traditional tribal story that warns against such disrespect.

The "way up above road" on the tail of the design, represents the trail to the creator, and the "scallops" (triangles) featured throughout are commonly found on traditional tribal basketry.

"I think the public should remember that these symbols have existed in this area for thousands of years," said Jesse Beers, the cultural stewardship manager for the Confederated Tribes. "And that they speak to the need for stewardship and respect for our foods, lands and waters."

"As a sovereign nation with a strong canoe culture, the Confederated Tribes of Coos, Lower Umpqua, and Siuslaw Indians respect the Coast Guard for their abilities on the water, and we are grateful for them being available, if ever we should get into a dangerous situation," Beers added.

It's traditional for a Coast Guard aircraft to carry a symbol that is unique to its region, but the aircraft at this air station have been without one for more than a decade.

"Some stations just place the unit patch on the side," said Cmdr. Winston Wood, the executive officer at Sector North Bend. "There are several air stations with separate and distinct tail art. To name a few, Traverse City has the cherry wings, Detroit has the old English "D," New Orleans has the fleur-de-lis, Savanah has the clover leaf, and Houston has the longhorn. I wanted something that spoke to the region in which we operate."

A member of the Confederated Tribes of Coos, Lower Umpqua and Siuslaw Indians, looks up at the new tail art on an MH-65 Dolphin helicopter at …

As the newer MH-65C helicopters started replacing the older HH-65B helicopters, North Bend had been rotating helicopters with other units every three to six months.

"It has been too long since North Bend aircraft had a symbol of unit pride," said Wood. "We seized the opportunity of a blank slate, and I think it faithfully represents the heritage of the community where we live and work."

These markings also help to designate an aircraft during situations of mass mobilization, where seamless operational cohesion is integral to mission success, the release stated.

The Coast Guard has implemented a doctrine of training standardization that allows for air crews to be assembled from all different units during a state of emergency.

For example, when the Coast Guard responds to a major hurricane, aircraft from air stations all over the United States will be flown in.

Regardless of where a service member is permanently stationed, they can expect to jump into any similar aircraft and perform the same duties and responsibilities they would at home, often relieving someone exhausted from search and rescue missions.

"We all travel and train together," said Wood. "So it's nice to be able to look up and see that the spirit and culture of Oregon is being carried with us."

"We hope that by including our traditional stories and honoring of the Thunderbird and the Ocean, through this tail-art, we are helping to bless the helicopters and crew members of the Coast Guard and to keep them safe, as they help keep us all safe, on our waters," said Beers.

“I just kind of wanted to do something different, and get kids off video games,” Bahama Boards manager Christal Kralicek said.