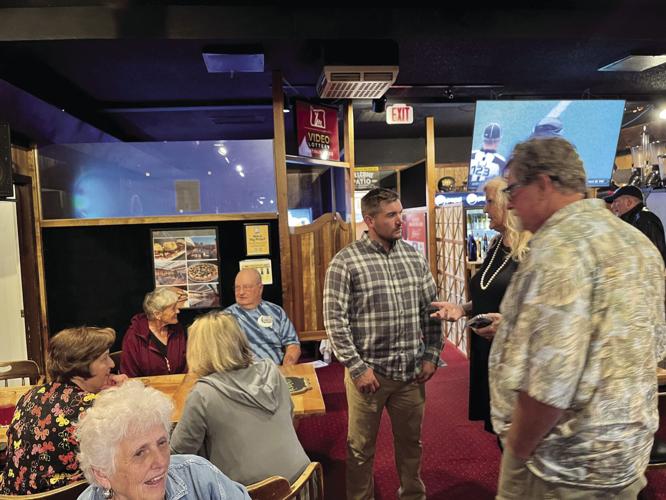 Alek Skarlatos visits with voters during a campaign stop at North Bend Lanes. 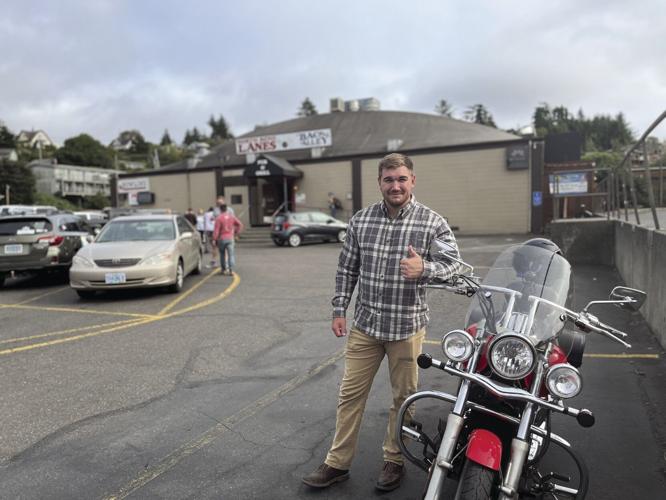 Alek Skarlatos stopped in North Bend during a motorcycle tour of the Fourth Congressional District.

Alek Skarlatos visits with voters during a campaign stop at North Bend Lanes.

Alek Skarlatos stopped in North Bend during a motorcycle tour of the Fourth Congressional District.

Alek Skarlatos has already lived life most people would envy.

A true American hero after fighting in Afghanistan as part of the Oregon National Guard and later helped stop a gunman on a train from Amsterdam to Paris and later a celebrity of sorts after he starred in a movie depicting the train incident and finished third in Dancing with the Stars, Skarlatos had no dreams of being in politics.

That was until he came home to Oregon.

"Nothing made me feel like I wanted to run," Skarlatos said while visiting Coos Bay and North Bend last week. "I felt like I had too. I never would have thought I would have run for office. After everything that happened to me, I came home and saw a great need."

That need led to Skarlatos running for Congress in the Fourth Congressional District two years ago, where he finished five points behind longtime incumbent Peter DeFazio.

After finishing closer than many expected, Skarlatos decided to try one more time, announcing his candidacy as a Republican in District Four before DeFazio decided to retire.

"I had already announced, but when I saw what happened in Afghanistan, that pissed me off and made me want to do something about it," Skarlatos said. "Since then, we've had runaway inflation and gas prices above $5 a gallon."

That combination makes Skarlatos feel Oregon is primed for a change, in the Fourth District and across the state. In his district, the biggest opportunity is Skarlatos will not be facing DeFazio.

"I thought it was a great opportunity, or course," he said. "He's been there 36 years. It's hard to beat someone with that kind of incumbency. He's been there longer than I've been alive."

With DeFazio out of the picture, Oregon Labor Commissioner Val Hoyle won a crowded race to win the Democrat primary. Hoyle has been endorsed by DeFazio and both of Oregon's U.S. senators.

At only 29, Skarlatos is one of the younger candidates running for Congress, but he sees that as a bonus, not a negative. And he fully believes 2022 is the time for Republicans to make a move in Oregon.

"People are excited,' he said. "We've had one-party rule in Oregon coming up on 40 years. People are excited about change. Republican or Democrat, people are ready for change. America is too polarized."

Skarlatos said the Fourth District is up for grabs, and his challenge is visiting enough voters to come out ahead. Last week, he made move through the district on what he called the "On Duty with Alek" district-wide motorcycle tour. In North Bend, he stopped and North Bend Lanes to visit with voters.

"This time, we're making a concerted effort to reach every corner of the district," Skarlatos said. "So, if people want to talk to me, they can. It's been a lot of fun. I learned a lot and faced a lot of tough questions."

Skarlatos said while talking to voters, he hears over and over how the government has made their lives more difficult.

"It's kitchen-table issues - overall the cost of living," he said. "It's not getting better. People are concerned with the where the country is going as a whole.'

Skarlatos said while he disagreed with many of DeFazio's political views, he understands why the district supported him so long. He said DeFazio presented himself as a moderate Democrat and ensured his staff provided excellent constituent services.

"Val Hoyle does not have the same reputation," Skarlatos said. "She had a pretty extreme voting record from her time in the Legislature."

Another advantage Skarlatos has right now, according the reporting from other media, is significant money in the bank. Thanks largely to having no opponents in the primary, Skarlatos said he is in good shape to spend what is needed to compete in the district.

"We have support from small donors across the country, which is great," he said. "Val Hoyle gets 43% of her funding from PACs and special interest groups."

So what does Skarlatos have to do to pull off the upset?

"We're doing it right now, talking to voters, meeting them in their community," he said. "I'm here to learn. I just want to bring balance back to Oregon."

If Donald Trump gets the republican nomination for president, will you vote for him?