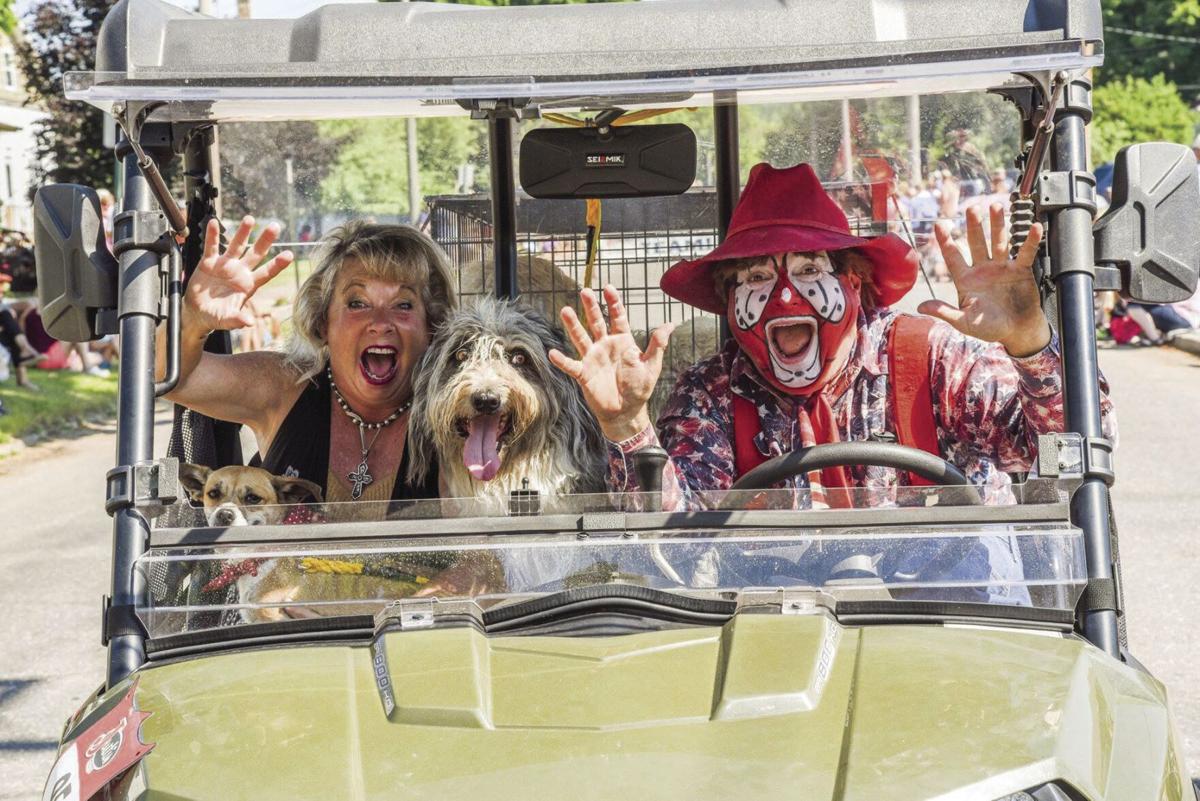 Bert Davis and his wife Frannie will return to the Coos County Fair & Rodeo this week, 47 years after they met at the same event.

Bert and Frannie Davis have created a show that stands out thanks to the work of their 18 dogs. The dogs travel the country with them and are a part of their family.

Bert Davis and his wife Frannie will return to the Coos County Fair & Rodeo this week, 47 years after they met at the same event.

Bert and Frannie Davis have created a show that stands out thanks to the work of their 18 dogs. The dogs travel the country with them and are a part of their family.

Bert and Frannie Davis have seen and participated in the biggest rodeos in the world. National Finals Rodeo in Las Vegas? Been there, done that. Massive shows in Oklahoma, Texas, California? Every single year.

But one small-town rodeo stands out for the Bert and Frannie, the Coos County Fair and Rodeo. The two met there in 1974, Bert’s first year as a rodeo clown. Two years later, Frannie was named the fair queen. They have performed in Myrtle Point several times through the years and will be returning home this year to entertain crowds at the 2021 Coos County Fair and Rodeo.

Yes, Myrtle Point is home, a place Frannie grew up and a place they both have spent a considerable amount of time during the offseason.

Bert Davis was born to be a rodeo clown. Growing up in Oakdale, California, Davis was a frequent visitor to the Oakdale Rodeo. But he never was into watching the horses or even the participants. Another thing caught his attention.

“Rodeo clown, that was it for me,” Bert said. “You could find me at the Oakdale Rodeo, at the clown trailer.”

In Oakdale, a larger-than-life rodeo clown caught Bert’s attention. Wild Bill Lane lived just miles down the road from his house, and Bert remembers being fascinated with the different animals and creations at Lane’s house every time they drove by.

When Bert decided to become a bullfighter, Lane become his mentor. And that led to the summer of the 1974 when the two came to Coos County to participate in the rodeo.

“In 1974, that was my first year as a PRCA member,” Bert said. “We did three shows at the fair. After the bull riding on Saturday night, Bill said, ‘There’s a dance here, you can get a girl.’ I went to the dance and I met Frannie. We corresponded through the mail. She still has those letters.”

The two continued to meet at the fair each summer and dated in the early ’80s. But distance and time led them to others, and both were married. After those marriages ended, the rodeo brought them back together in 1999. That year, Bert went to a rodeo in Albany and walked in to see Frannie coaching queen candidates.

Shortly later, they were married and began a life traveling city to city to participate in rodeos.

“I fought bulls for 22 years,” Bert said. “Then I went straight to clowning and barrleman. I always had an animal act.”

Now at 64, Davis is happy to admit those animals are the stars of his show. When he and Frannie travel, they are joined by 18 dogs, and each one participates in their show in one way or another. All the dogs are rescues that are trained to entertain.

“I started working with dogs in 1995,” Bert said. “I had a dear friend, a clown, who helped me with my first three. He wouldn’t give me tips, but I watched him working, and he helped guide me. Since 1995, we’ve used over 30 dogs. They are the stars of the show. In our show, there’s so much going on.”

While Davis is known as the Coppertown Clown, his act is now Davis’ Mutley Crew.

When he began his career as a rodeo clown, Davis was the youngest person to ever receive a PRCA card at 16. In the early 2000s, he had a conversation with a friend that made him realize something had to change. At the time, the rodeo world was changing, with many rodeos getting rid of entertainment acts like rodeo clowns. To set himself apart, Davis had to go big, so he tried out for and was accepted onto America’s Got Talent. He made it through two rounds of the national TV show before he had to leave due to commitments with several rodeos. While the TV show was exciting, Davis said those rodeos had booked him years in advance, and he couldn’t pull out.

Even though his stay on TV was short, it re-energized his career. For years, he and Frannie went to multiple rodeos every week and even began traveling with a circus over the winter. Things were going very well, and then COVID hit. Like many, Bert expected the impact to be limited, but it shut down rodeos nationwide for a year, leaving Bert, Frannie and the dogs with no income and little to do.

So, Bert got a job as a truck driver in Cottonwood, Calif., leaving rodeo behind. He expected that trend to continue in 2021, admitting his career felt like it was close to over.

“I was happy driving truck,” he said. “I had only two rodeos booked. All of a sudden, my phone started ringing. We are booked between rodeos, bull ridings and circuses every weekend until November.”

This last week is typical for a rodeo clown’s life. Bert and Frannie were in Woodland, California on Friday, spent Saturday and Sunday in Fortuna and entertained in Susanville on Tuesday. Wednesday morning, they are planning to make the drive to Myrtle Point.

Bert and Frannie say coming home is a big deal, and one they are looking forward to. Frannie jokes the trip with be her 45-1/2 high school reunion for Coquille High School. While she will see old friends, she will also get to visit her family, who still live here.

“It’s very exciting,” Bert said. “If you would have asked me at the first of the year what 2021 would be, I never would have predicted what would happen to us the last few months.”

To get to the Coos County Fair and Rodeo itself was a challenge. When Bert saw the rodeo was returning and he had the weekend open, he reached out to the board of directors to gauge interest. And while there was interest, one thing there wasn’t was money. Bert cut his fee as much as possible, but after being forced to close last year, the fair had little money for entertainment. That’s when the local community stepped up.

Wayne Nelson and Jake Choquette with the Roxy Barber Shop in Coquille began raising funds. In a short time, they got assistance from Stephanie Martell, Joe Slack and Andrew Locati with HGE Architects in Coos Bay; Wendy King and Mike Layton with Coquille Supply; Milky Way Feed in Coquille and Nails by Kayla Jean in Coquille. Together, they raised the money to bring Bert and Frannie home.

“Myrtle Point, in my lifetime, it’s one of them places that has a lot of meaning,” Bert said. “Here we are coming to the Coos County Fair and Rodeo for the first time since 2011. It’s been nine or 10 years since we’ve been there, and our show has completely changed.”

One advantage of the COVID lockdown is it gave Bert and Frannie time to revamp the show. Depending on where they perform, Bert, Frannie and the dogs can go for five minutes up to half an hour.

“The show we’re presenting now, I didn’t think I could ever get done,” Bert said. “Frannie and I have been training, and the show we have now, I don’t think I’ve had a better show.”

Bert and Frannie spend much of their time on the road, pulling a trailer that doubles as a dog kennel, their home and storage shed. While their show thrills people nationwide and has received numerous awards, Bert said for him, the reward is still being able to perform.

“All I ever wanted to be was a rodeo entertainer,” he said.

While that has been accomplished, he has also become a husband and a dad to 18 dogs.

“Our dogs go everywhere with us,” Bert said. “We don’t let anybody watch our dogs. They’re our family. They’re considered our children and grandchildren.”

And as much as Bert and Frannie love their dogs, the dogs reward them, as well.

“Every dog we have is in the show one way or another,” Bert said. “These dogs love it. They go crazy because they want to perform. The dogs love what they do. You can see their happiness when they perform.”

While 2021 has been a surprising turnaround year for Bert and Frannie, Bert said he believes events like the Coos County Fair and Rodeo are helping the entire country heal after COVID.

“In all the events we’ve done so far, we’ve had record crowds,” Bert said. “People want to get out, they want to be entertained, they want to see people.”

And this week, they get to see a homecoming for The Coppertown Clown and his rodeo queen love.