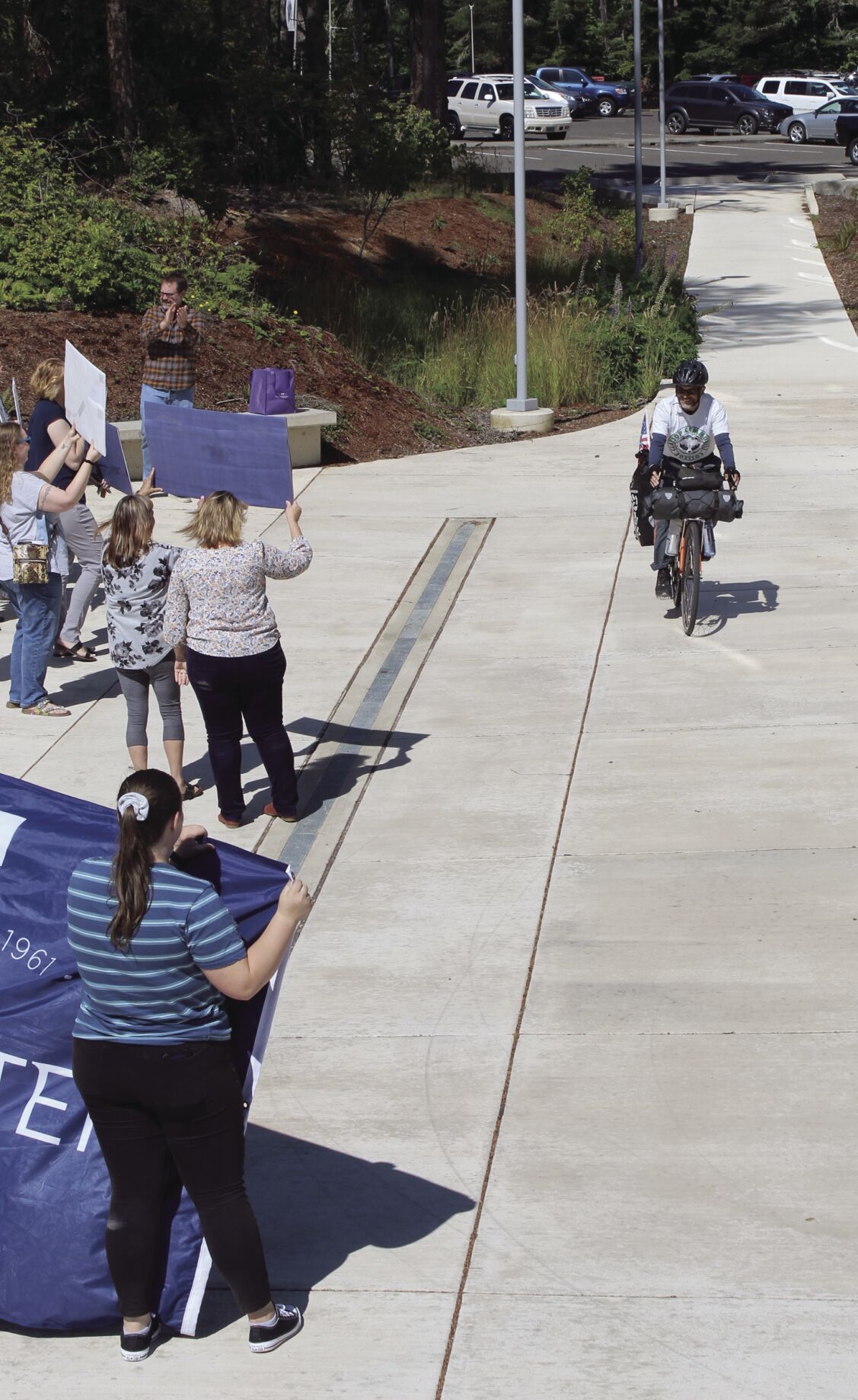 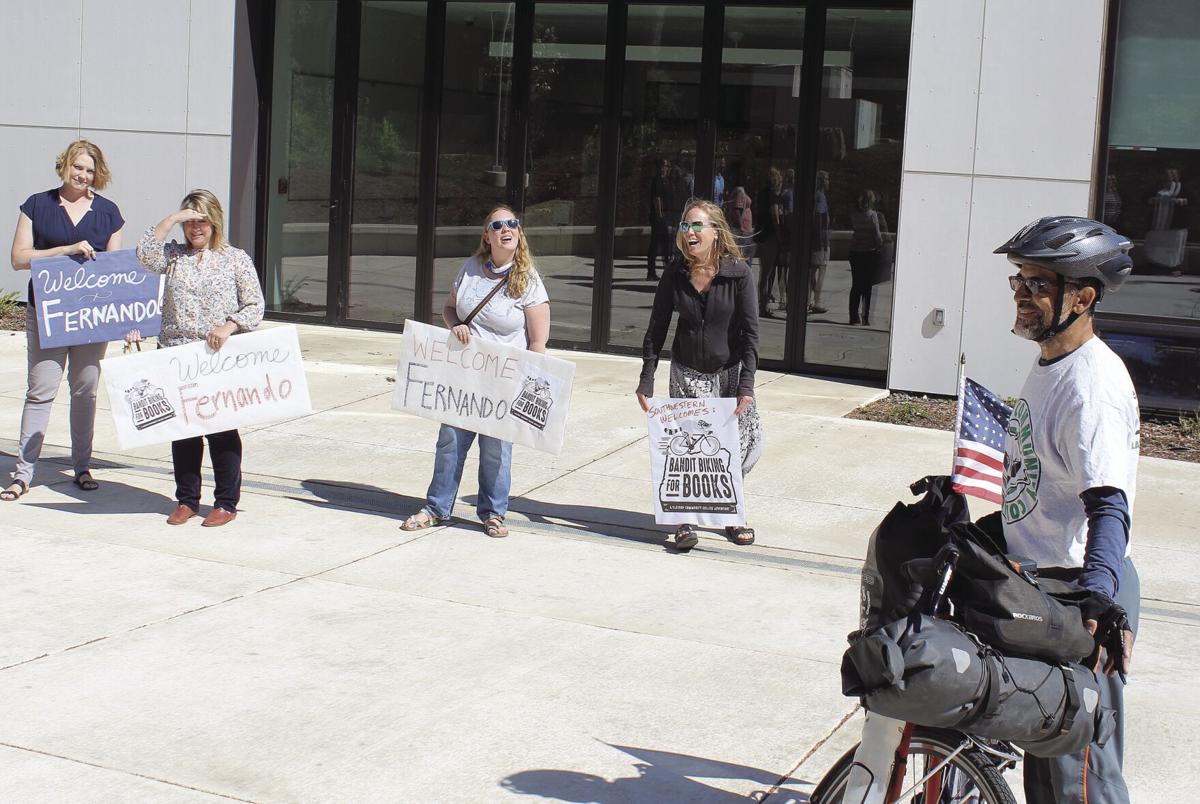 Fernando Rojas Galvan explains why he is riding his bicycle across the state this month. 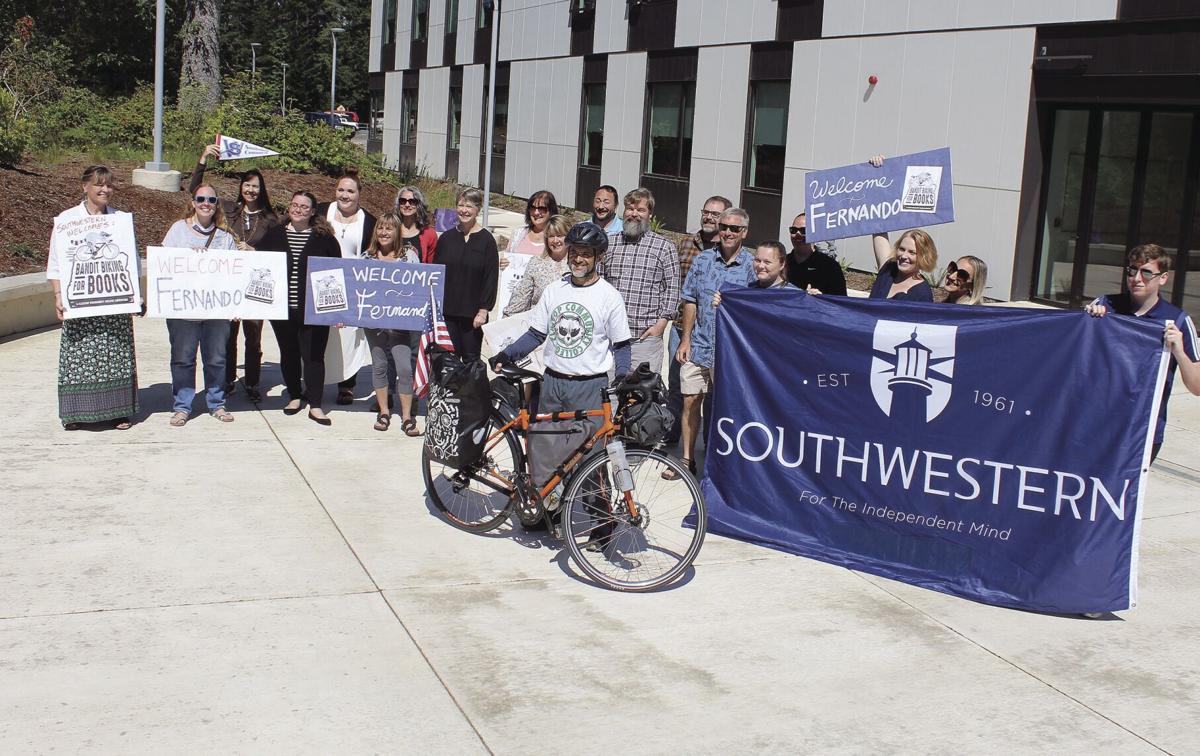 Fernando Rojas Galvan poses for a photo with faculty and staff at Southwestern Oregon Community College.

Fernando Rojas Galvan explains why he is riding his bicycle across the state this month.

Fernando Rojas Galvan poses for a photo with faculty and staff at Southwestern Oregon Community College.

Fernando Rojas Galvan has two loves in life – being outdoors and teaching at a community college.

This summer, he is combing the two while trying to raise money for his college, Clatsop Community College. To do both, he decided to ride his bike around the state, stopping at every community college on the way.

On Wednesday, Galvan made to Southwestern Oregon Community in Coos Bay. He was greeted by more than a dozen staff members and students, many holding signs welcoming Galvan to the campus.

“I’m thrilled to be here,” Galvan told the crowd. “I was looking at your website, and I can’t believe you guys get people from all over the place.”

Galvan said the crowd was the biggest he has seen at any of his stops. He then explained why community colleges mean so much to him.

Growing up, Galvan picked apples in fields across Oregon. He said that taught him a lot of lessons he still uses.

After high school, Galvan attended Portland Community College, where he met a professor who changed his life.

Galvan said community colleges sometimes get a bad rep from major universities, but he said the two can work together.

After riding through a major heat wave, Galvan said he was excited to be on the coast where the temperature was much lower. He said being on the road had been exciting. Even while on his tour, he has also kept up his schedule, teaching three classes via the Internet for Clatsop Community College.

“I’m an active person,” he said. “I need to be moving. I thought, what can I do to combine my love for hiking and biking and my love for students. I thought maybe I can bike to every community college in Oregon.”

When Galvan ends his tour later this week, he will fall one college short, but he will still have finished more than 1,500 miles and visited 16 colleges in July. All the while, he has been raising money through Bandit Riding For Books. He said Wednesday, his efforts have raised $45,000 for Clatsop Community College this summer.

On his tour, he has had only one day off and had ridden as many as 118 miles in one day. He has stayed at motels, camped outside and in a few homes if supporters. As he prepared to leave Southwestern Oregon Community College, he said he was going to enjoy the rest of the day.

“Today, I don’t have anywhere to be,” he said. “I’ll ride until my heart is content and I’ll stop. Taking a gander around at my surroundings, it’s just breathtaking.”

He said there have been some extreme challenges on the trip, such as riding up mountain passes into a headwind with the temperature over 100. But there have also been some exhilarating times.

“Do you remember what it’s like to be 12 and go down a hill very fast? That’s what it’s like,” he said. “Riding down the hills has been scary but mostly exhilarating.”

By continuing to teach three English as a second language courses this month, Galvan said his students have been a part of his adventure.

“They know about my travels,” he said. “Some of them are asking me, ‘Teacher Fernando, where are you tonight?’”