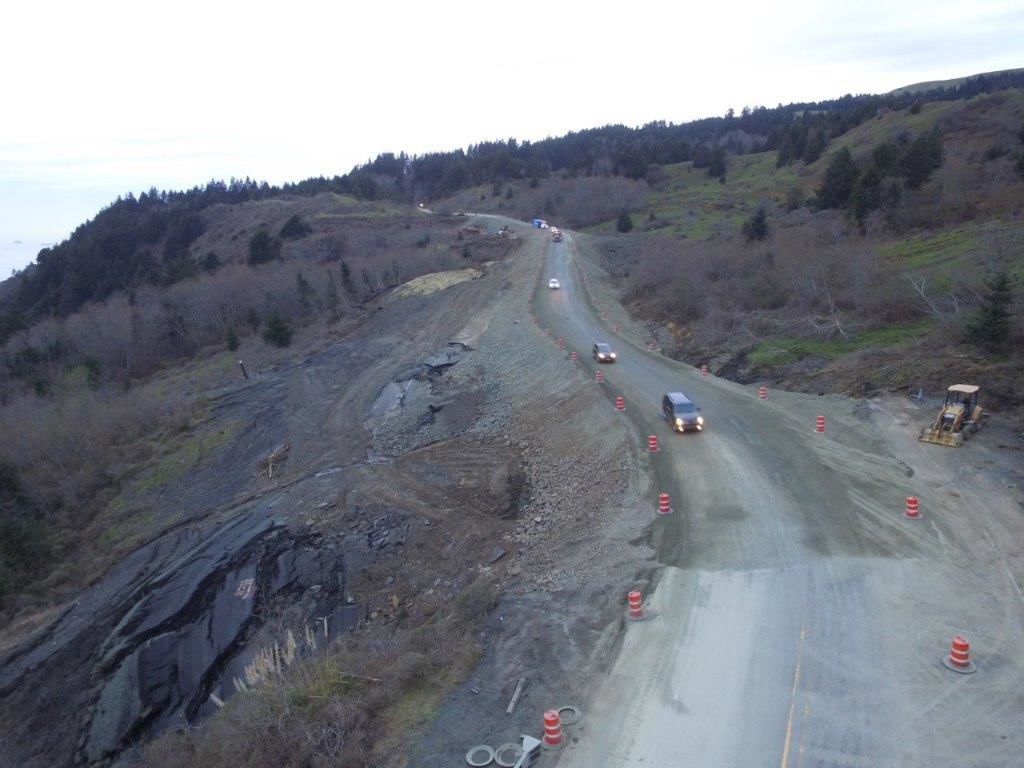 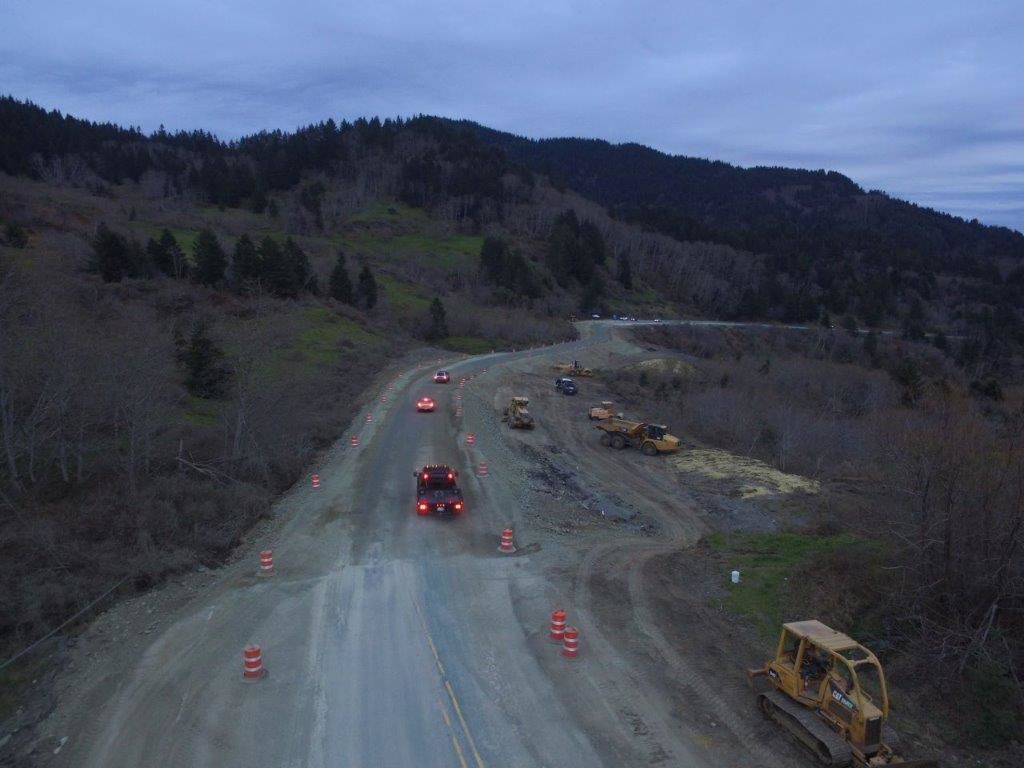 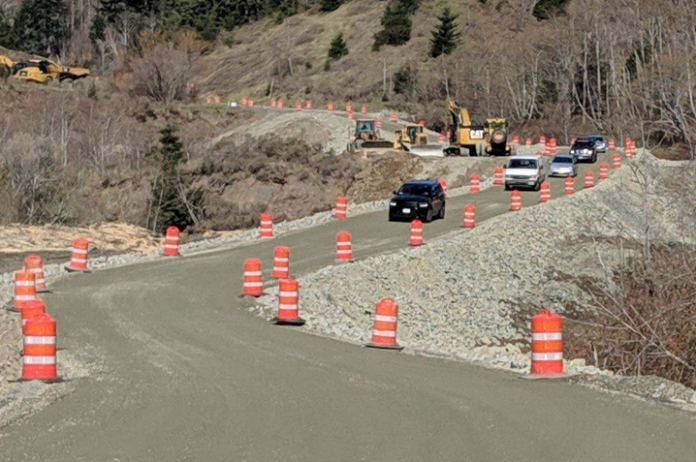 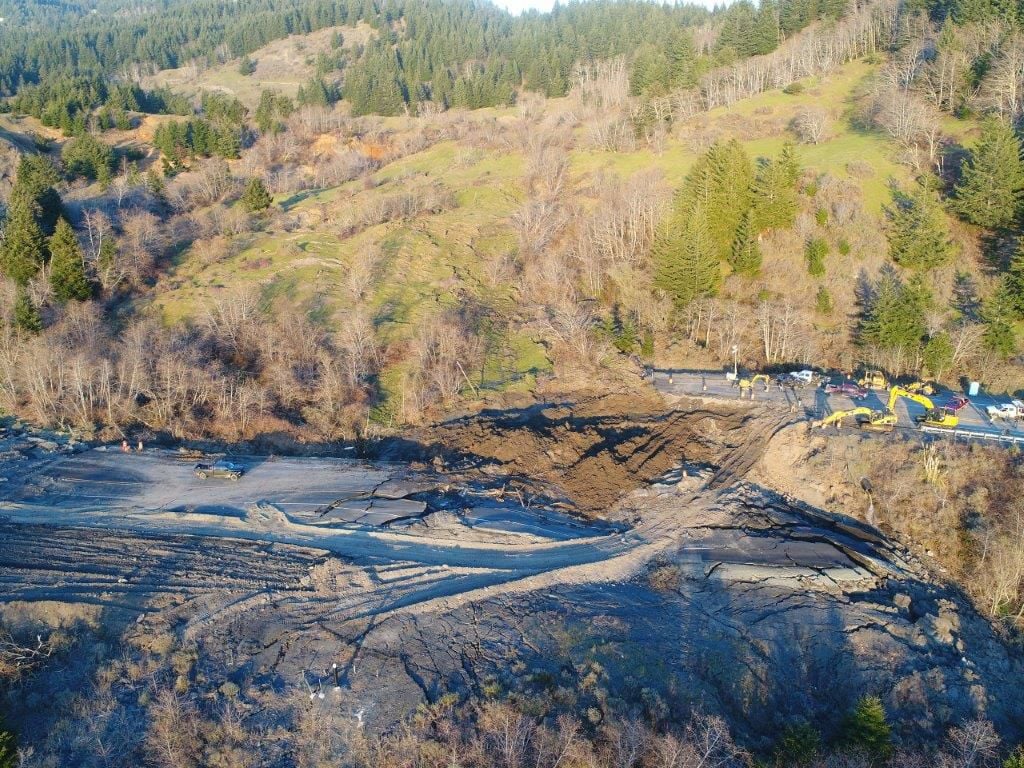 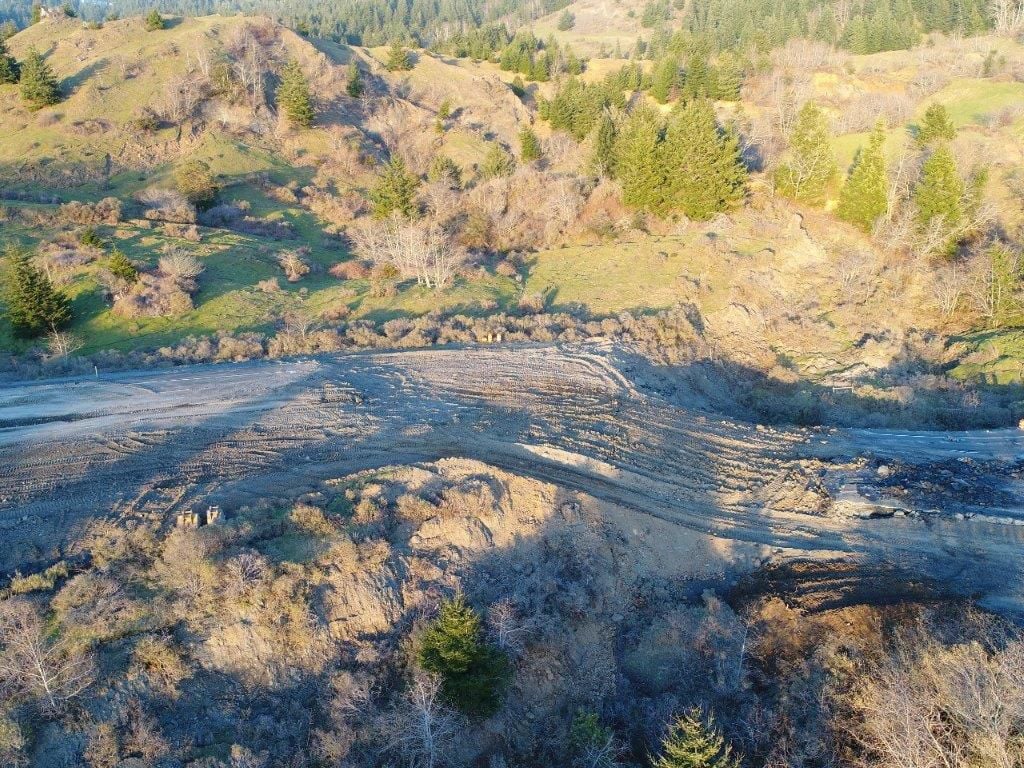 COQUILLE — Though two lanes are now open at the Hooskanaden slide area on U.S. Highway 101, Oregon Department of Transportation is working to restore it back to three lanes at its original location.

“We are designing a project to put the road back to its state before the slide and do corrections on the hill,” said Dan Latham, public information officer for ODOT. “When it slid, it took out the drainage systems and we need to get that back in place.”

That project is still in the design phase and is expected to be finished in October. Early estimates put the cost for these repairs at $4 million, which has been submitted to the Federal Highway Administration. According to Latham, this includes all recent and ongoing repair work, as well as the planned reconstruction of the highway to its original alignment this summer and fall.

The slide has already cost an estimated total of $1.12 million, as of May 6, Latham wrote in an email to The World.

Darrin Neavoll, ODOT manager of District 7 – covering Coos, Curry and Douglas counties, added that when the two lanes opened last week it was on a temporary alignment. The original alignment of the road was a “sweeping curve at three lanes,” which is what ODOT plans to restore.

“Every year the slide moves a little bit, by one to six feet, and we are able to keep it maintained, even though it is a little rough, but people can drive over it safely,” Neavoll said.

Because it’s just a matter of time before it happens again, ODOT has looked into three potential options to permanently fix the area that was destroyed back in February. Heavy rains caused a slide so terrible, dropping the road by 30 feet and shoving it 100 feet west, that it has only happened three times in the past 40 years.

“All we’re doing is putting (Highway 101) back knowing eventually it will move again,” Neavoll said.

On Friday, May 10, ODOT held a public meeting in Coquille to answer questions about the slide, what’s being done to repair the road, and to discuss potential permanent fixes to that stretch of highway.

Latham said almost 40 attended, though the most vocal were individuals from Curry County, including Commissioner Court Boice.

However, no decisions were made at the Friday meeting.

“There were a lot of questions asking us what other information we had and how we came to this information, trying to suss out what is possible,” Latham said.

Neavoll explained that when there is an emergency event, ODOT receives federal funding for repairs to restore the area to what it was before the event happened.

“If we can show there was a cheaper alternative that would hold up to future storms, we could make that case,” he said. “At this point, we couldn’t.”

But Alterative #1 that was considered involved turning Carpenterville Highway, or the Old Highway 101, into the new route around the slide area. This was the road used as a detour when the slide first hit in February.

“We looked at whether we could widen that, straighten the curves and address the slides to potentially make that a reliable detour for all traffic to use,” Neavoll said.

However, there were 90 slides on that detour and a number of geographical issues. The cost to make this idea a reality would potentially cost the state $439 million.

Alterative #2 looked at a more permanent fix where the slide is now. ODOT had its geologist look at it, who said a fix could include using jetty rock used to protect jetties from ocean erosion. There would also need to be drill shafts filled with rock to stabilize there area, but no guarantee that it would stop it because “that’s a big slide,” Neavoll said.

The cost for that project was estimated at $302 million.

Alternative #3 was to put up a bridge where the slide happened. But to do that would require a 3,500 foot suspension bridge at the cost of $350 million.

“You would still have to have a place for the bridge to land and without drilling and exploring more, there’s a lot of risk for that,” Neavoll said. “The focus now is to just get the road back to where it is.”

To put these costs into perspective, Neavoll and Latham pointed to the statewide bridge program which has a budget of $300 million.

“So these are at that or more,” Neavoll said. “For the house bill funding, the dedicated project selected was $600 million. So half the cost of all those state projects is what this would cost.”

Not only that, but Latham emphasized that the “entire Oregon coast is a slide zone.”

“We have a lot of geological activity whenever it gets wet, where we see movement and cracking in the roadway,” Latham said. “There are other pretty big slides in the area as well. There are big costs to deal with the slide, but say the Arizona slide opens five years down the line. I don’t see how we can sink a huge amount of money into slide after slide after slide… I don’t know if there is a permanent solution to the slides along the coast.”

NORTH BEND — When Rik Villarreal heard the news last month that his hotel, The Itty Bitty Inn, had been named one of Yelp’s 2019 Top 100 Hotel…