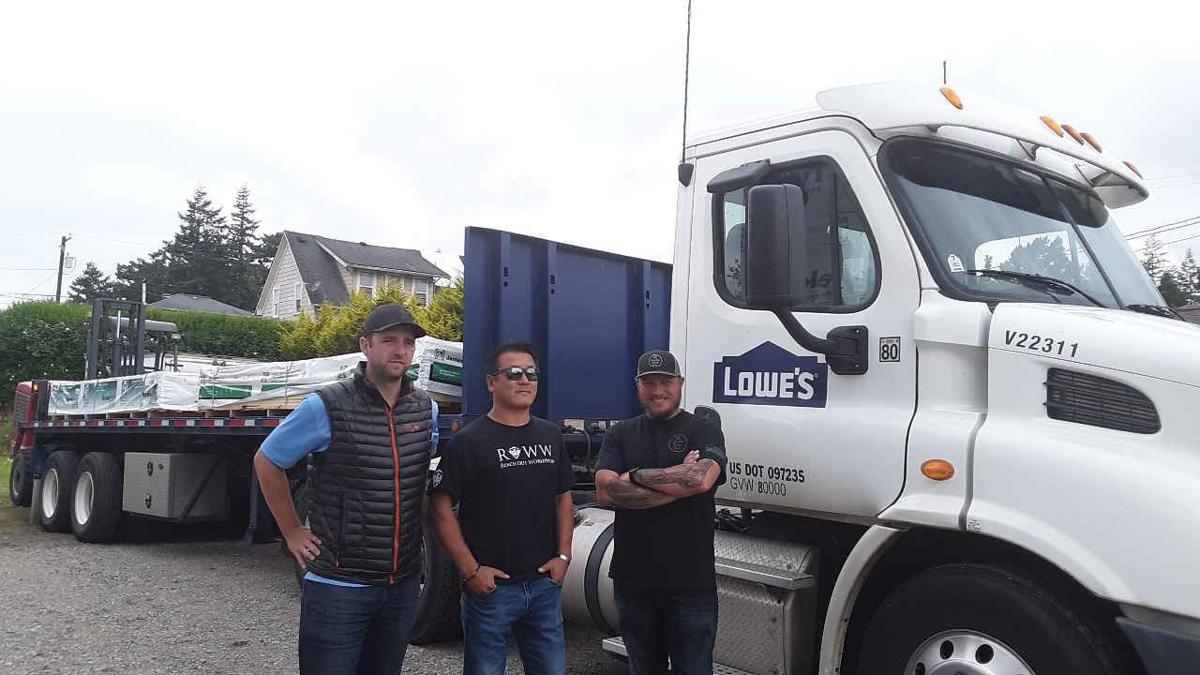 Joshua Stout and Merit Gragen with Reach Out Worldwide stand with Patrick Wright, founder of Operation Rebuild Hope and Bryan's Home, in front of a donation of siding on Monday, July 1. 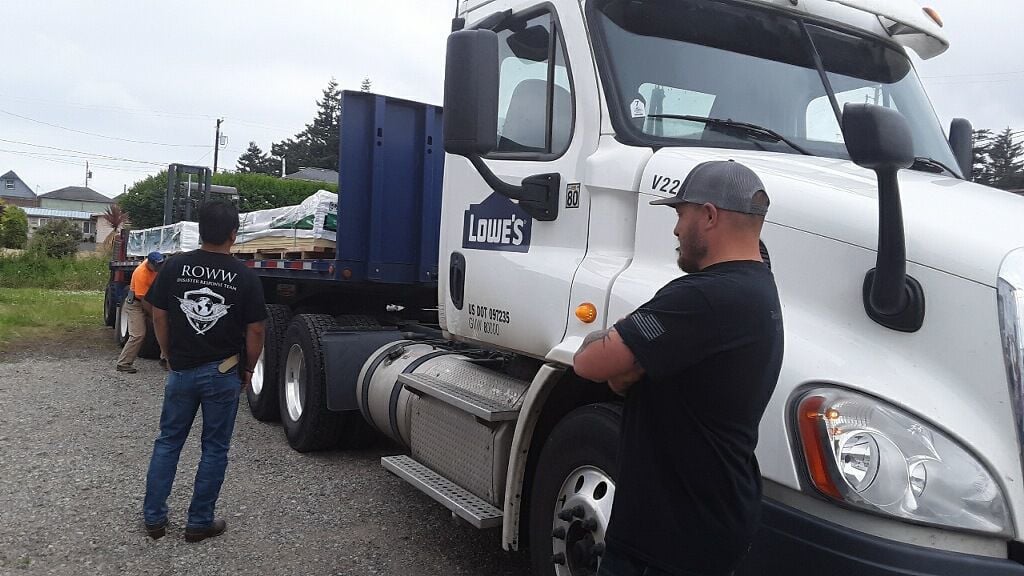 Patrick Wright, founder of Operation Rebuild Hope and Bryan's Home, watches a donation of siding be delivered by Lowe's through Reach Out Worldwide.

On Monday, a Lowe’s Home Improvement semi-truck dropped off items from siding to boxes of caulking, saw blades and nails.

“Reach Out Worldwide was contacted by Operation Rebuild Hope and Bryan’s Home,” said Joshua Stout, director for deployment and response for Reach Out Worldwide, Marine Corps veteran, and a local to the Coos County area. “We were asked for help. Some of our team members, executives for Reach Out Worldwide, are from here and we have a partnership with Lowe’s. Lowe’s said if we support it, they support us, so we gave them the wish list and got it all.”

Operation Rebuild Hope, which helps veterans in need, and Bryan’s Home, which will house veterans once complete, were founded by Patrick Wright who sent that wish list to ROW a few months back. His old chef instructor, who now owns Wildflour Catering, mentioned that she knew someone named Felicia Walker who reached out to Wright on Facebook soon after.

“I didn’t know who she was and she asked what project we have going on, so I listed the roof, windows and siding,” Wright remembered. “She chose to help us with the siding. The administrator on the page said, ‘You know who you’re talking to, right?’ Well, it was Felicia Walker with Reach Out Worldwide.”

After the Lowe’s truck left Bryan’s Home, Wright called the donation a blessing.

Patrick Wright, founder of Operation Rebuild Hope and Bryan's Home, watches a donation of siding be delivered by Lowe's through Reach Out Worldwide.

“It’s been a huge donation,” he said. “It’s $20,000 in materials on the cheap end and it’s awesome that ROW is a global organization with roots in our community.”

Not only that, but Stout added that many with ROW are veterans themselves.

“It strikes close to home,” said Merit Gragen, U.S. Army veteran and team lead for ROW. “When I first got out of the military, I went through what a lot of these people went through. If I fell down hard enough and burned my bridges and pushed away my family and friends, which I could have done being in a self-destructive state, this is something that would have helped me if I needed it. It’s something good for the community for veterans.”

Not only that, but Stout said this is the first project they have seen like Bryan’s Home.

“We focus on helping those impacted by natural disaster, have done smaller fundraisers and charity events with affiliated nonprofits in southern California, but this is the first nonprofit in this area where we could make a quick impact,” Stout said.

Then on July 9, a team of volunteers is going to flood the Bryan’s Home property to get the windows framed in one day.

“It’s going to be epic,” Wright said, adding that the donation for the siding is what people will first see. “This is the face. When we did the windows, that was the first time people saw it coming together. You can see the change. With the siding, it’s the face on the house. In the first time in 25 years, people will drive by and see this house look amazing.”