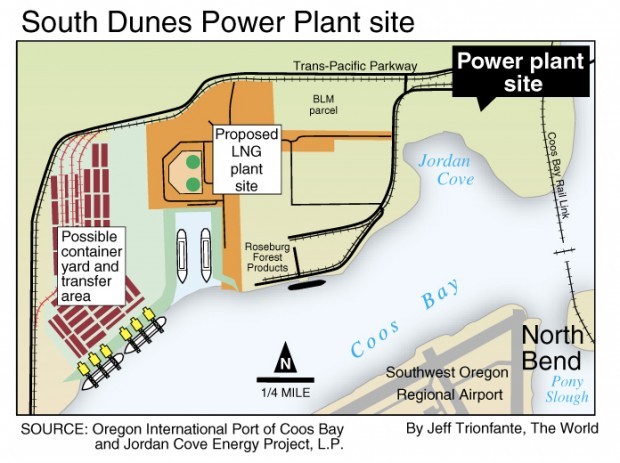 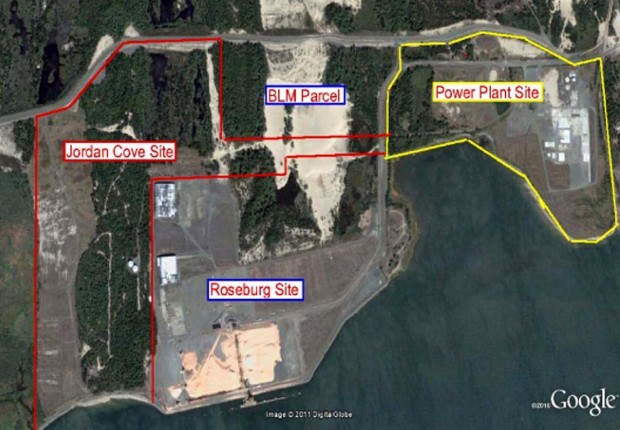 This map shows the areas Jordan Cove Energy Partners plans to develop on the North Spit.

This map shows the areas Jordan Cove Energy Partners plans to develop on the North Spit.

The South Dunes Power Plant would provide electricity for the proposed liquefied natural gas export facility on the North Spit.

To build a power plant, Jordan Cove needs a permit from the Oregon Department of Energy. But that permit is in addition to, and separate from, Jordan Cove’s permit application to the Federal Energy Regulatory Commission, which looks at the project as a whole.

“A lot of citizens are frustrated,” said Jody McCaffree, the leader of a local anti-LNG group.

“There are a lot of agencies we have to say the same dang things to.”

FERC is currently collecting public comments to inform its own permit application.

That part of the presentation was short, stalled by interjections from the crowd. The Energy Department moderator threatened to shut the meeting down after several people heckled Jordan Cove’s spokesman Roy Hemmingway.

“Criminal!” one man called out.

Information was limited, anyway, as Jordan Cove has not filed a formal application with the department. The company on Aug. 21 gave the state its 30-day notice of intent to file an application.

“We’re certainly going to have an awful lot more detail about the power plant and what is needed in the application” later on, Hemmingway said.

The public has 10 days left to comment on Jordan Cove’s notice of intent, which angered many of the 20 or so people who attended the meeting. Some claimed, in raised voices, that many locals still don’t know about the Energy Department’s permit.

The Energy Department will incorporate any new information from comments — environmental or safety concerns, etc. — into Jordan Cove’s official application.

The public may still comment on the proposal while the application is being filed, said Chris Green of the state energy department.

A do-or-die moment comes once the state energy department drafts a proposed order, which will be written after the formal application is made. Anyone who fails to comment on the draft proposed order cannot participate in any future appeals, should a permit be granted, Green said.

The power plant would be built on the old Weyerhaeuser liner-board mill site, east of the export facility. The site is currently 20 feet above sea-level. Jordan Cove proposes to raise it an additional 20 feet, which would put it above the tsunami hazard zone, Hemmingway said.

Jordan Cove needs the power plant to export LNG from here. An export facility takes natural gas from a pipeline and cools it into a liquid that can be shipped overseas.

Jordan Cove previously planned to build an LNG import facility on the North Spit, and even received an import permit from FERC. But the company changed its business model to export early this year, citing market shifts.

The previous plan did not include a power plant.

If the plant is built, it could supply additional power to the local grid, Hemmingway said. It could also connect with future offshore energy projects, such as deep sea wind.

To sign up to receive notifications on the South Dunes Power Plant project from the Energy Department, visit http://tinyurl.com/EFSC-email.

Join now & SAVE on your first 3 months!