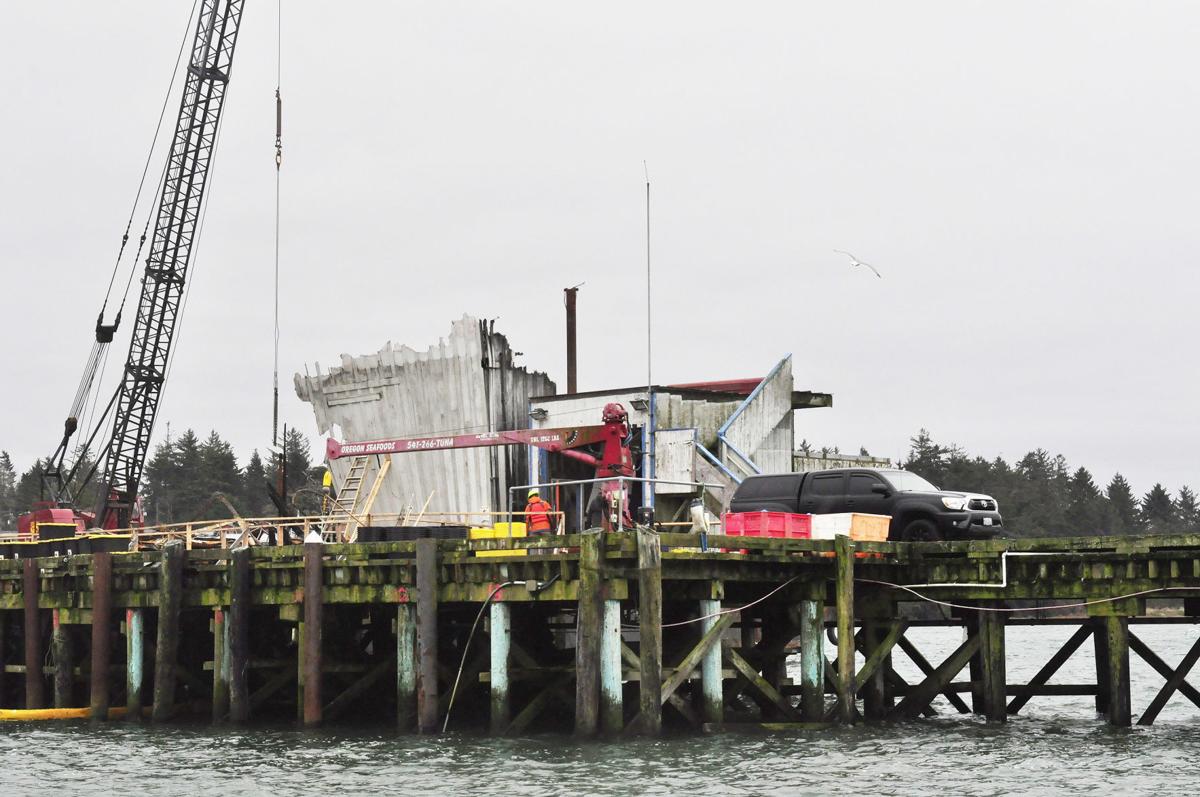 The Charleston Ice House can no longer function to provide fishermen with ice for their catch following a fire that gutted the building on Dec. 19, 2019. The International Port of Coos Bay is working on a long-term solution. 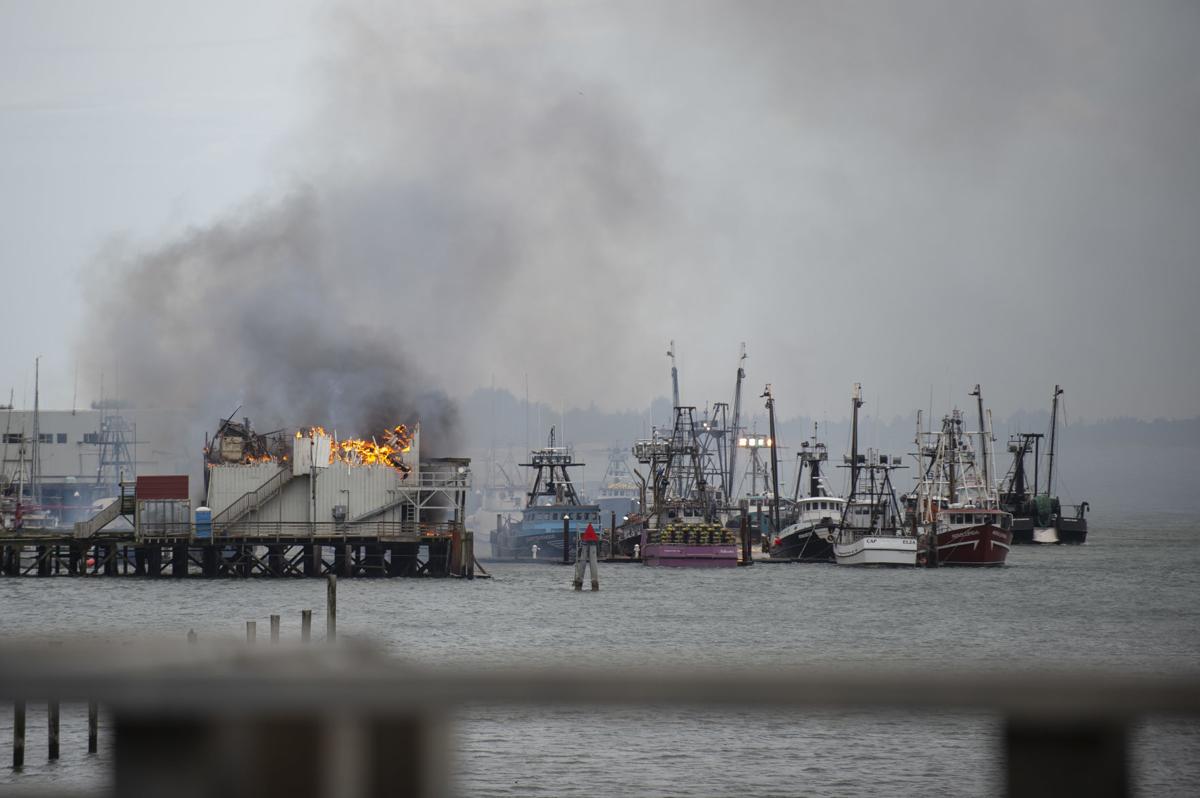 A fire rages on the Charleston Ice Dock releasing a plume of ammonia laden smoke Dec. 19, 2019 in Charleston. 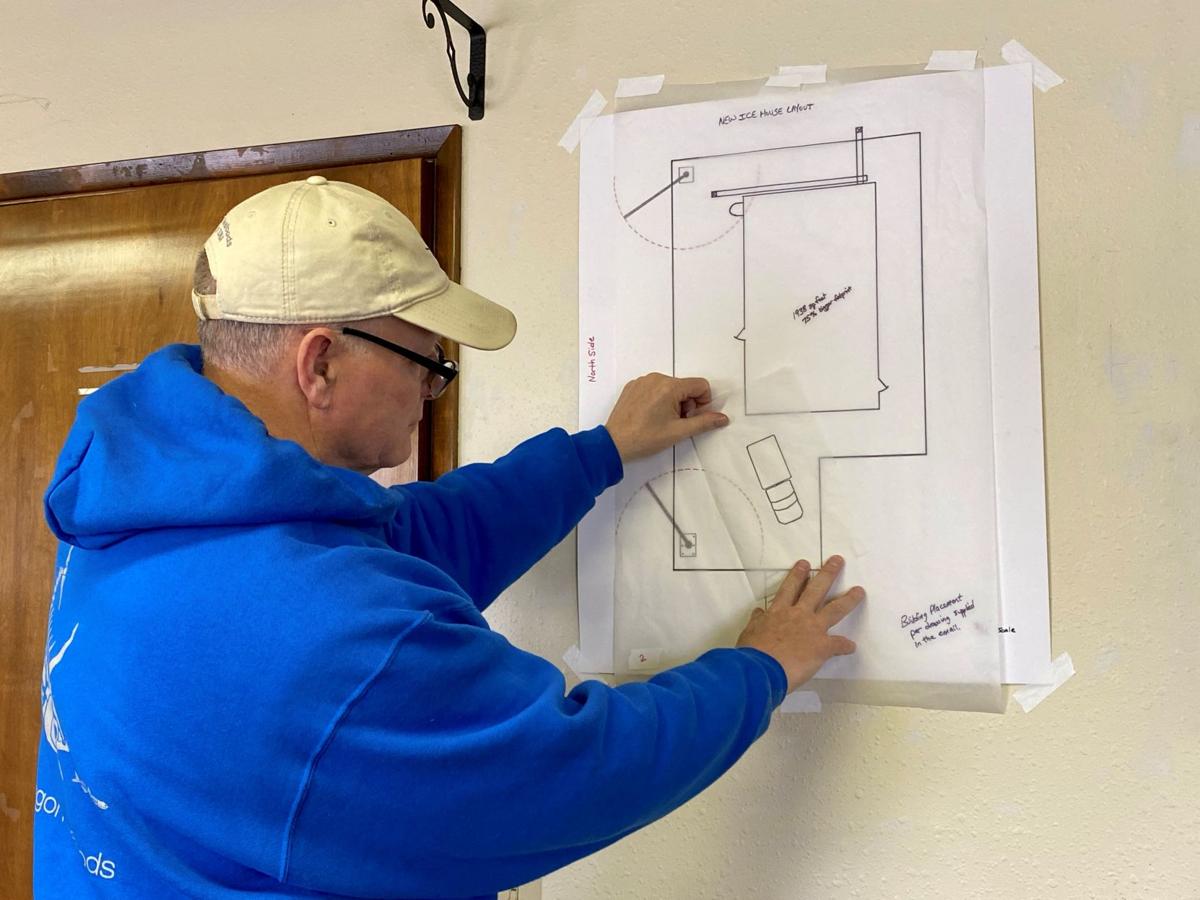 Mike Babcock, of Oregon Seafoods, shows scale drawings he created and presented to the Port of Coos Bay Commissioners earlier this month. Babcock has identified space limitations and challenges he says will interfere with companies like his who use the dock regularly.

The Charleston Ice House can no longer function to provide fishermen with ice for their catch following a fire that gutted the building on Dec. 19, 2019. The International Port of Coos Bay is working on a long-term solution.

A fire rages on the Charleston Ice Dock releasing a plume of ammonia laden smoke Dec. 19, 2019 in Charleston.

Mike Babcock, of Oregon Seafoods, shows scale drawings he created and presented to the Port of Coos Bay Commissioners earlier this month. Babcock has identified space limitations and challenges he says will interfere with companies like his who use the dock regularly.

CHARLESTON — Some local businesses are frustrated with the new layout of the Ice Plant, which burned down in December and is in the process of being rebuilt.

Mike Babcock, of Oregon Seafoods, is leading a group of local businesses and fishermen who he said feel left out of the Oregon International Port of Coos Bay’s new Ice Plant Rebuild Project.

According to Babcock, the only tenant on the dock that houses the ice plant, the new layout proposed by Port officials limits dock space and makes it difficult for commercial trucks to safely enter the area to load and unload equipment.

The dock, which houses the ice plant, has historically been used for other reasons outside of fishermen accessing commercial grade ice, said Babcock. On multiple occasions, he explained people would access the hoists on both or either corner of the dock as well as the ice shoot often at the same time.

With the new layout having a larger footprint and being shifted closer to the north side of the dock, the once multi-use proponents of the dock will no longer exist, he said.

“I don’t think they realized the impact (the new layout) is going to have to the other uses of the dock including dock ice sales, the public hoist and our company-owned hoist,” said Babcock. “It’s going to limit those operations and it’s going to affect several generations to come. This rebuild is a huge deal. It isn’t something that we have to try to Band-Aid over.”

Last December, a fire destroyed the over 40-year-old ice plant structure, which is located across from the U.S. Coast Guard Station. After it was declared a total constructive loss, Port officials began work to create and implement a short-term and long-term plan to return ice services to the local fishing fleet.

A declaration of emergency was passed shortly after the incident to begin efforts to minimize the impacts to local fishermen and rebuild the facility.

According to Margaret Barber, the director of external affairs with the Port of Coos Bay, a series of public meetings with the Charleston’s commercial fleet as well as meetings with individual stakeholders was held over the past few months to bring their input into the design phase of the new ice plant.

The meetings were held with the goal of meeting the needs of all the stakeholders involved to the greatest extent possible, she explained. The Port she added worked closely with the fishing fleet to rebuild the plant as expeditiously as possible.

“Access to commercial grade flake ice is critical to certain fisheries landed in Charleston,” Barber wrote in an email. “As such, rebuilding the facility to accommodate that need has been a top priority for the Port.”

A meeting held at the Charleston Marina RV Park on Feb. 27 was the only public meeting Babcock said he was aware of. The meeting, which he attended, was presented to visitors as more of an informational session and to update to community of what the Port had been working on rather than to gain input, he said.

“During the meeting they talked about equipment suppliers, increase capacities, funding, insurance and timeframes, but they didn’t really talk about different dock uses,” said Babcock. “There were some people in the audience who brought this up about the historical use of the dock and what their plan was?”

It was at that meeting Babcock said he expressed his concerns of the new layout to Port officials and along with fellow industry colleagues including Rick Goche, owner of Sacred Sea Tuna and Port of Bandon Commissioner.

Goche, who has over 10 years’ experience working on the dock in Charleston that houses the ice plant and also works with Babcock’s company to process the pouches that hold his product, said he too is concerned over the limited space on the dock as presented by the proposed new layout.

“To not have access to that dock in that configuration with that kind of truck access is really burdensome,” he said. “I don’t know how (Babcock) and I are going to work through that.”

According to Goche, the two have tried on multiple occasions early on in the design process to give their input into the new rebuild to protect their interest in dock space for their businesses and others.

“We’re not trying to cause problems, we’re just trying to fix mistakes that could have been avoided if they just made one phone (call) to the one tenant out on that platform,” said Goche. “I appreciate and acknowledge their sense of urgency of making this project happen sooner rather than later and their acknowledgement of the fundamental part of the infrastructure that an ice plant is in this port.

“I just don’t want to see them go so fast they make a mistake or mistakes that not only affect our businesses but businesses in this fleet for generations to come.”

Babcock and Goche also made appearances at the Port of Coos Bay Commission meeting held Thursday, April 16 where Babcock said he presented scale drawings of the proposed new layout and the previous layout to show the board the issues with dock space.

Captain Bob Pedro, owner of Miss Linda Charters, also joined Babcock and Goche in expressing his concerns with the new layout. The longtime fisherman said he submitted a letter to the board where he explained how vital the dock is to his company.

As a research-vessel charter company, whose home port is in Charleston, Pedro said he’s worried about not having enough space on the dock to load and unload equipment and customers onto his vessel during research trips.

Having been in the research business and operating vessels for over 15 years, Pedro said the agencies who utilize its charter services often come with large, heavy equipment.

In the past, he’s assisted research teams deploy and recover buoys and other various research and test equipment for a number of educational and governmental agencies including the National Oceanic and Atmospheric Administration, Oregon Department Fish and Wildlife, Oregon State University and many more.

“We wind up with some pretty heavy stuff and large buoys that we load with our frame on that’s on the boat,” said Pedro. “This becomes our loading dock and it’s very convenient for us as dock space isn’t always available for us here at the shipyard when we need it.”

In addition to the meeting in Charleston and commissioners meeting, Goche said he was able to secure a follow-up meeting with the Charleston Marina Harbormaster Brandon Collura and John Burns, CEO of the Port of Coos Bay.

The meeting continued discussions regarding the move of the ice plant on the dock as well as stair placement on the north side which created another issue of space between the ice plant and the hoists, said Goche.

Following the meeting, the placement of the stairs was moved and port officials were also able to run an additional ice delivery line on the southeast corner of the building.

According to Collura, the Port was able to make those changes and implement those suggestions, but as far as moving the location back to its previous placement that would be a task it would be unable to do.

New ice plant on the way

The rebuild project includes replacement of piles and new decking at the dock head as well as new ice making equipment housed inside the new facility.

“We are in the final week of placing piling in the water as well as the cement pile caps and pushing forward over the next week or two the slabs will start going on the top of those pile caps,” said Collura. “At the same the first floor building walls are currently being pre-fabricated off site.”

A bit behind due to some COVID-19 related restrictions, the goal is still to open by mid-July to August to complete the project and to begin producing ice for the community, said Collura. A number of upgrades are being done to the new ice plant to allow for increased holding capacity and ice production.

“The second component of that is we’re also putting in bigger ice makers so the production rate will actually double in terms of how many tons per hour we can create the commercial grade flake ice,” he said.

According to Collura, the new facility, which is larger than the previous one, will be able to handle the demand of ice from the various influxes of vessels that pass through the port in Charleston during the peak of various fishing seasons.

“With our increased capacity our hope is that we can now meet the demand of more vessels and increase the traffic in the port,” he said.

The $8.5 million ice plant rebuild project was made possible by insurance money awarded after the fire as well as a number of loan sources through Business Oregon, according to Collura.

Claims that the Port didn’t seek input from local stakeholders and businesses or do enough to outreach to the community were denied by Collura and Barber. The two maintained a number of meetings were held and accommodations, when possible, were made to best meet the needs of all those involved.

However, Babcock and Goche disagree. Understanding the importance of having a new ice plant facility in a timely manner, the two said their overall disappointment was with the way things were handled and how they weren’t a part of the design process early on even after trying as far back as when the fire first broke out in December.

“Industry is there waiting to have a voice at the table,” said Babcock. “We want to be able to share what our needs are to the Port commission and Port operations. ... I’m hoping that we get enough other people expressing an interest that the Port will realize the error of their ways and will consider making a change even at this late stage of the game.”

As previously reported in The World, the Charleston Marina serves as the third largest commercial fishing hub in the state. According to the Oregon Department of Fish and Wildlife, in 2019 over 18.6 million pounds of fish and shellfish were landed with a value of more than $28.6 million.