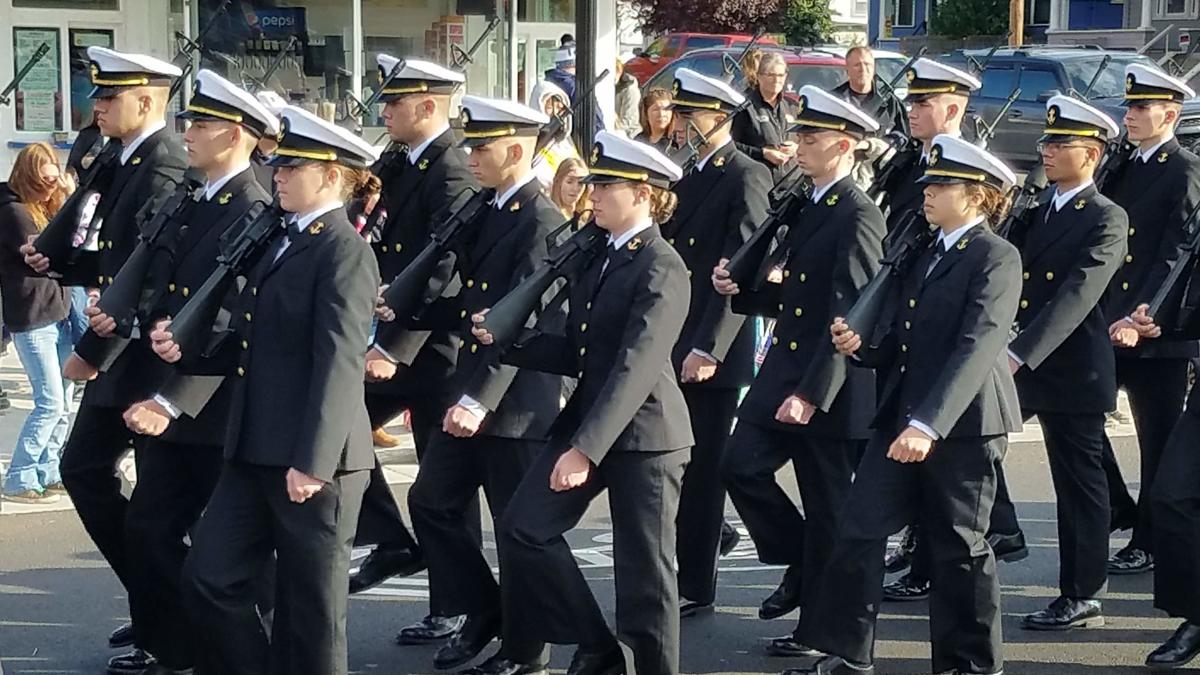 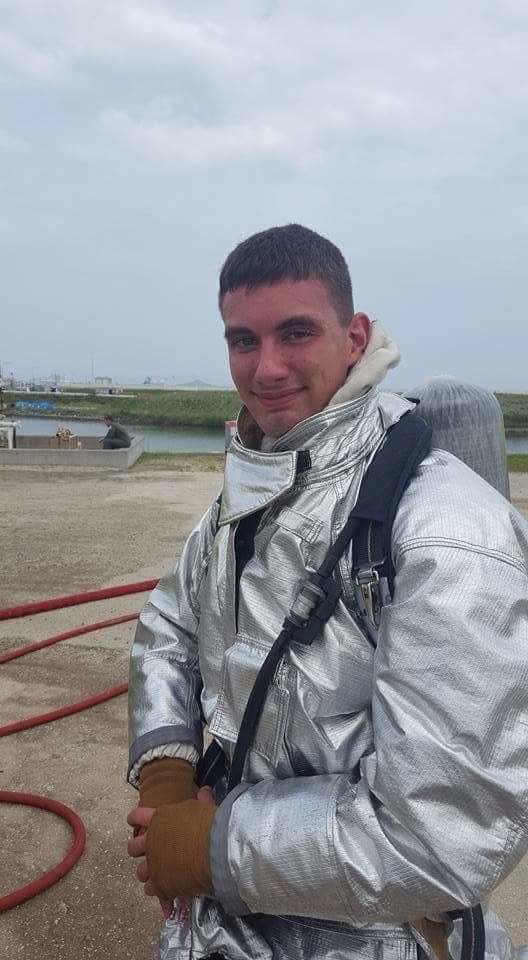 The Pedrick's oldest son, 22-year-old Aaron, who enlisted in the Marine Corps, can be seen above wearing a rescue suit. 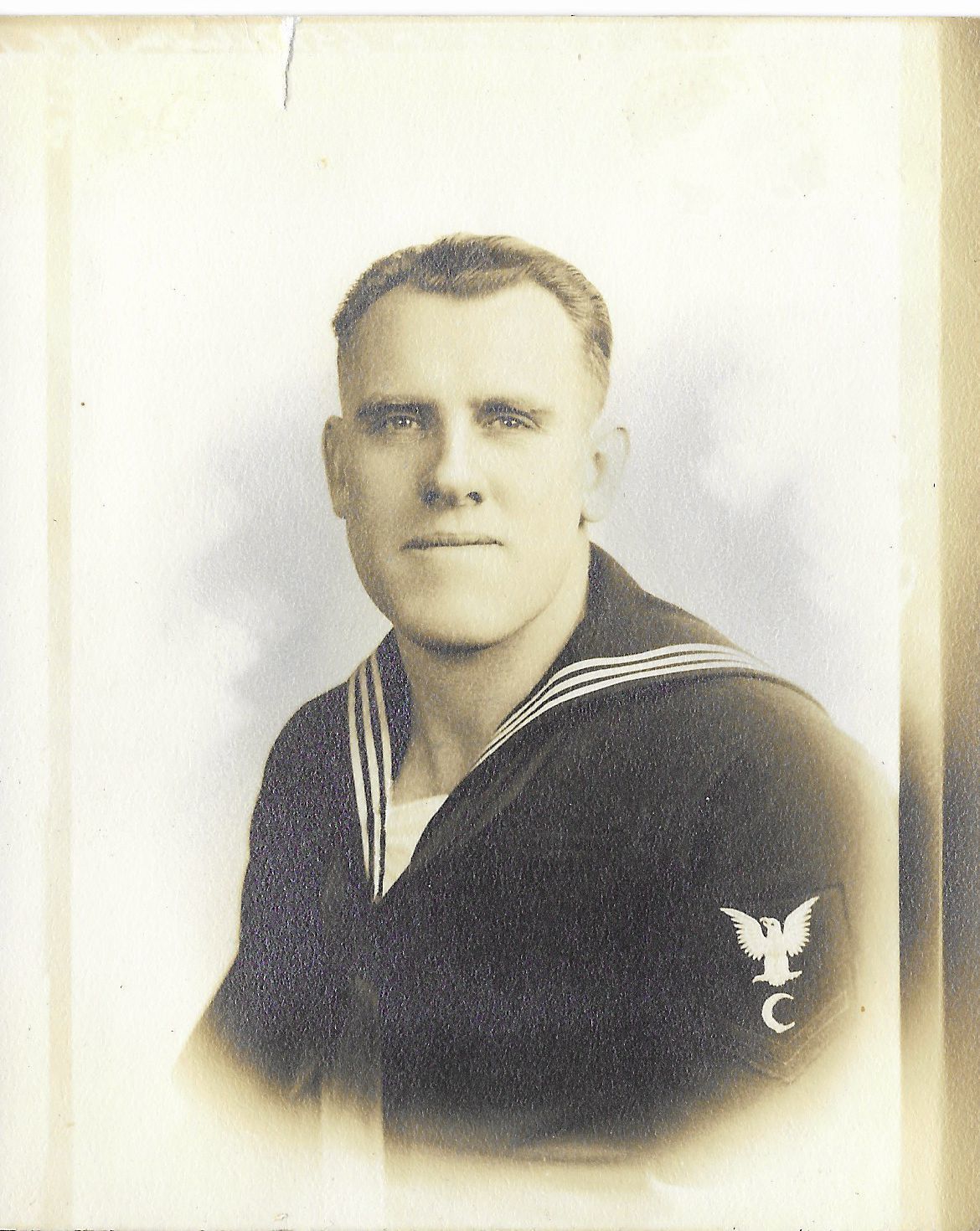 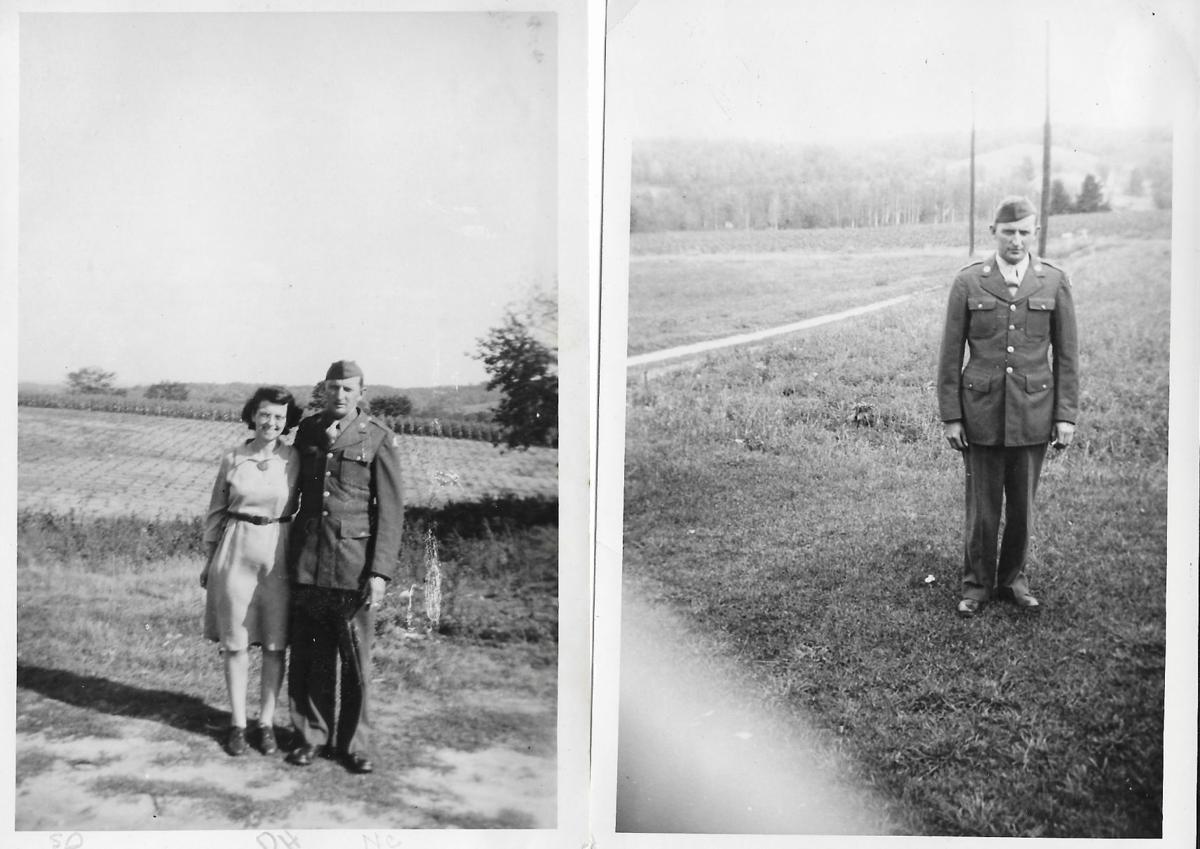 Tanya Pedrick's grandfather Walter Hart, who served in the Army, poses with his wife, Ione. 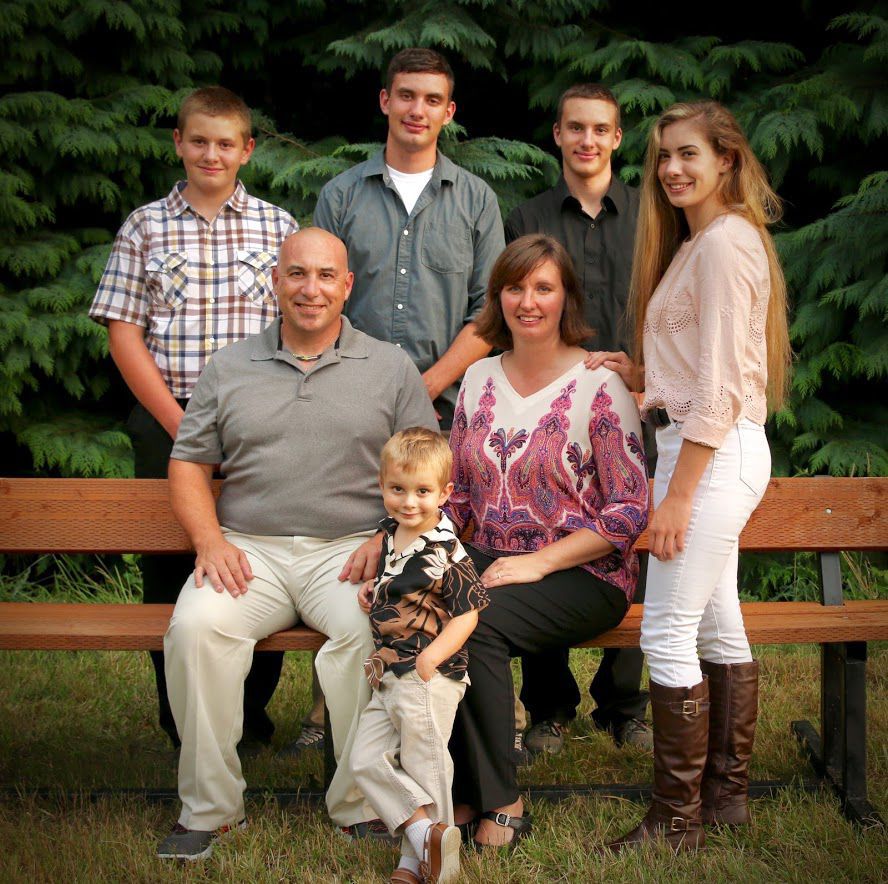 Kayne and Tanya Pedrick are joined by their five children Michael, Aaron, David, Kathrynn and Zechariah to pose for a family portrait. For decades the Pedrick family has carried on its tradition of serving in the military. 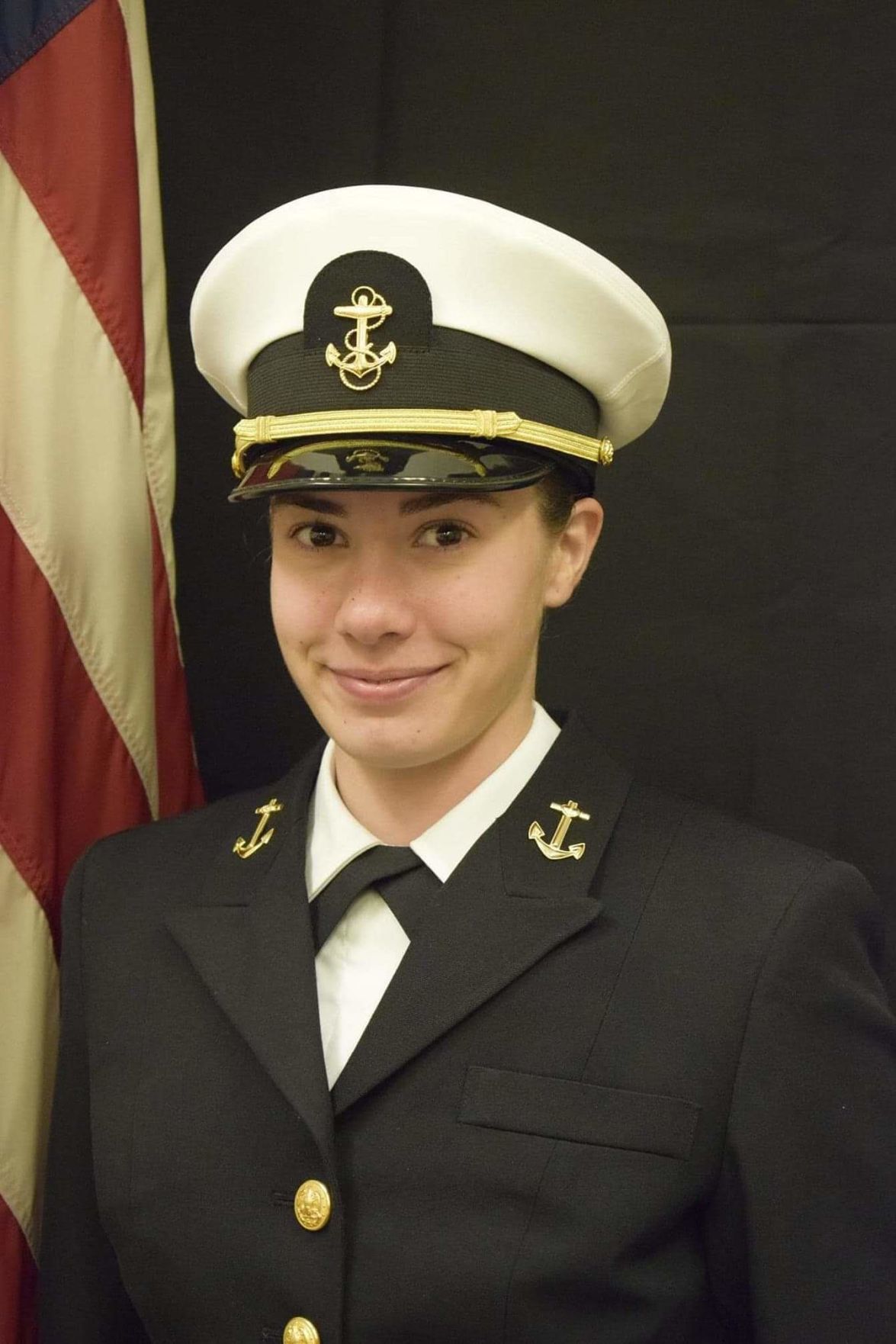 Kathrynn Pedrick, 19, continues her family's tradition of serving in the military as she joined Oregon State University's Navy ROTC program. 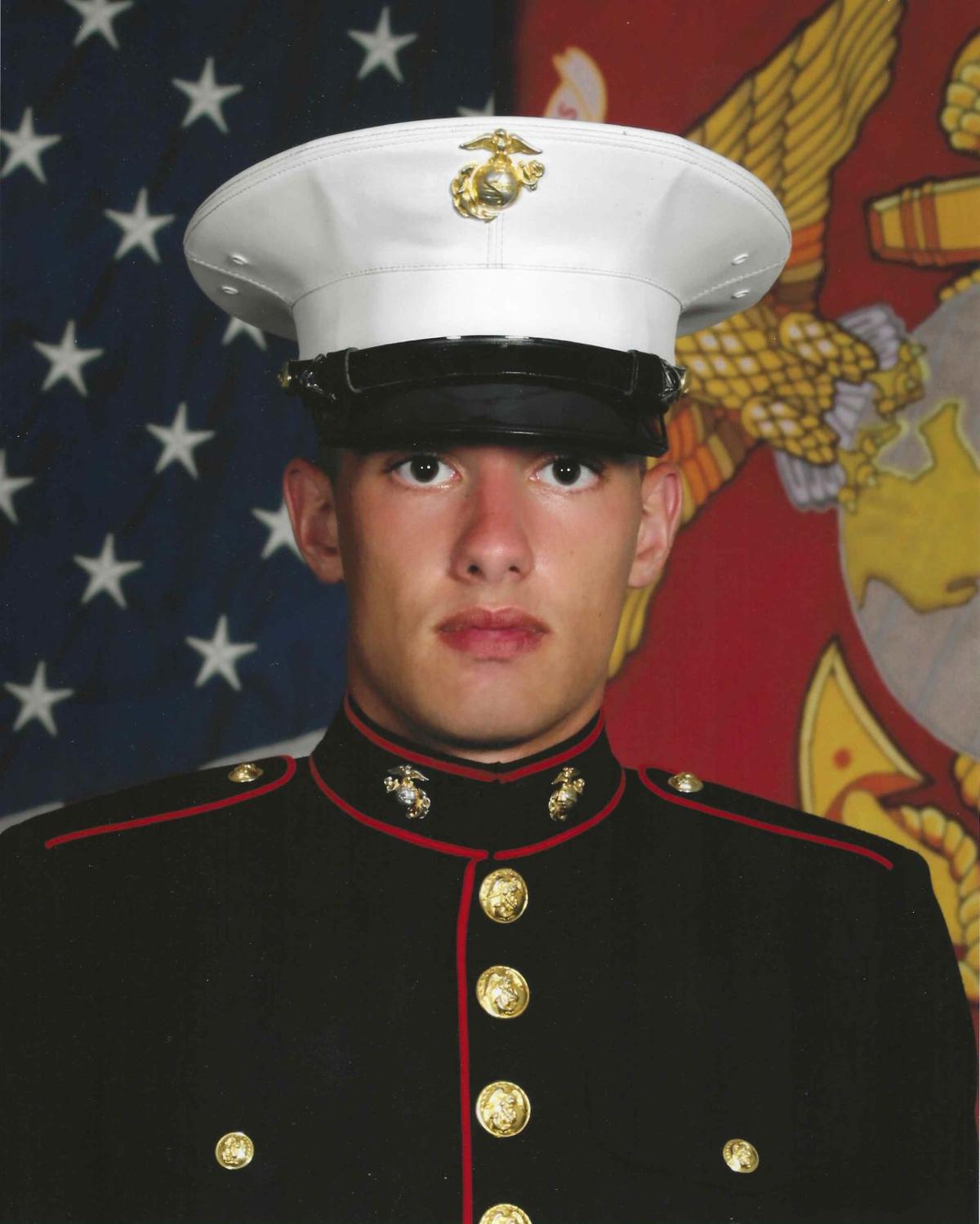 Tanya Pedrick's grandfather Walter Hart, who served in the Army, poses with his wife, Ione.

POWERS — For as long as he could remember, Kayne Pedrick’s family has always put others first.

Whether it be providing someone with a bit of extra encouragement or lending a helping hand, the Pedricks have for decades dedicated their lives to serving others.

Kathrynn Pedrick, 19, continues her family's tradition of serving in the military as she joined Oregon State University's Navy ROTC program.

“Our family has for generations passed down this idea that we have a responsibility and part of that responsibility is serving others,” said Pedrick. “We’re here to take care of our community, our family and our country.”

Pedrick’s great-grandfather, Walter, a Marine Corp veteran, launched the family’s tradition of serving others by enlisting in the military. Pedrick's grandfather, David enlisted in the Army Air Corp during WWII as well as his dad, Don, who in the 1970’s enlisted in the U.S. Air Force.

Unable to join himself due to a knee injury, Pedrick said he’s proud to be a part of a family who has for years put their lives on the line for the well being of others.

A physical education teacher at Powers High School, Pedrick, influenced by his father’s teaching career, has taught and coached students for over 20 years including his own children.

“I remember when we were in South Dakota when my dad was in charge of the gymnasium at the Ellsworth Air Force Base,” said Pedrick. “I got to go swimming all the time and that’s actually where I learned to swim … my dad was also one of my teachers and coached when I ran track.”

Looking to carry on the family tradition, Pedrick’s children, who each share their father’s athletic talent, have also taken a liking and interest in continuing the family’s commitment to the military.

The Pedrick's oldest son, 22-year-old Aaron, who enlisted in the Marine Corps, can be seen above wearing a rescue suit.

Pedrick’s wife, Tanya, a fellow teacher at Powers High School, said she was initially worried and scared when she learned her eldest had made the brave decision to join the military.

“I didn’t have any direct experience besides my grandfathers, who were both in the military, who both served way before my time of having someone close to me serve,” said Tanya. “It did scare me, but now that I’ve been through it I couldn’t be more proud of my children.”

Growing up hearing stories about her two grandfathers, Tanya said she learned her grandfather Marius, who had been a butcher by trade, worked on a Navy ship as cook providing meals for hundreds of service members.

"My family jokes that he could never just cook for a small amount of people," said Tanya laughing.

As for her grandfather Walter, Tanya said she learned he did railroad work in the Philippines where he was deployed. Her uncle, Russ Hart, also enlisted in the Army where he mostly served in France in the 1950s.

The Pedrick’s two younger sons, David and Michael, who are each students at Powers High School, have also expressed their interest in carrying on the family’s tradition.

Currently, David, 18, is applying to the Air Force Academy and Michael, 15, is still exploring his options, but mainly focusing on school since he just started his high school career, said Pedrick.

“We joke around saying Michael will join the Army because then we’ll have a child in the Marines, the Navy and the Air Force,” said Pedrick. “Our 5-year-old son, Zechariah, will have to join the Coast Guard and then we’ll have all the Armed Forces.”

In addition to their strong dedication to service, the family has also passed down from generation to generation their faith — in particular a biblical verse that they hold near and dear to their hearts.

Kayne and Tanya Pedrick are joined by their five children Michael, Aaron, David, Kathrynn and Zechariah to pose for a family portrait. For dec…

“We’ve passed down this verse for years, which is Deuteronomy 31:8,” said Kayne. “It basically says ‘don’t be afraid because the lord is with you’ and so knowing that and keeping our faith strong allows us to continue to serve others.”

Two local veterans — Kevin Haagen and Joshua McGonagle — decided after their military service was over to serve the Coos Bay community as firefighters.