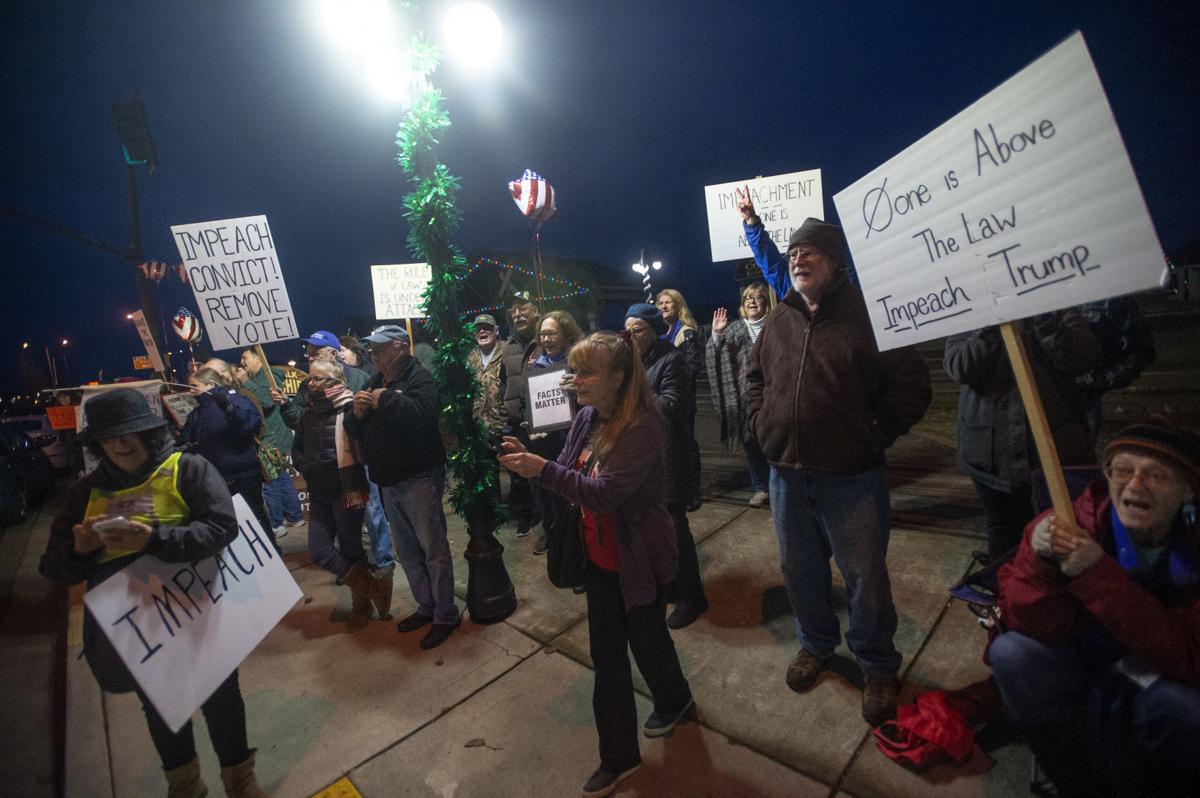 People rally Dec. 17 in support of the impeachment hearings of President Donald Trump along the boardwalk in Coos Bay. The rally, which drew about 100 people, was part of a nation-wide movement supporting the ongoing the trial. Trump was impeached by the House of Representatives Wednesday, Dec. 18. 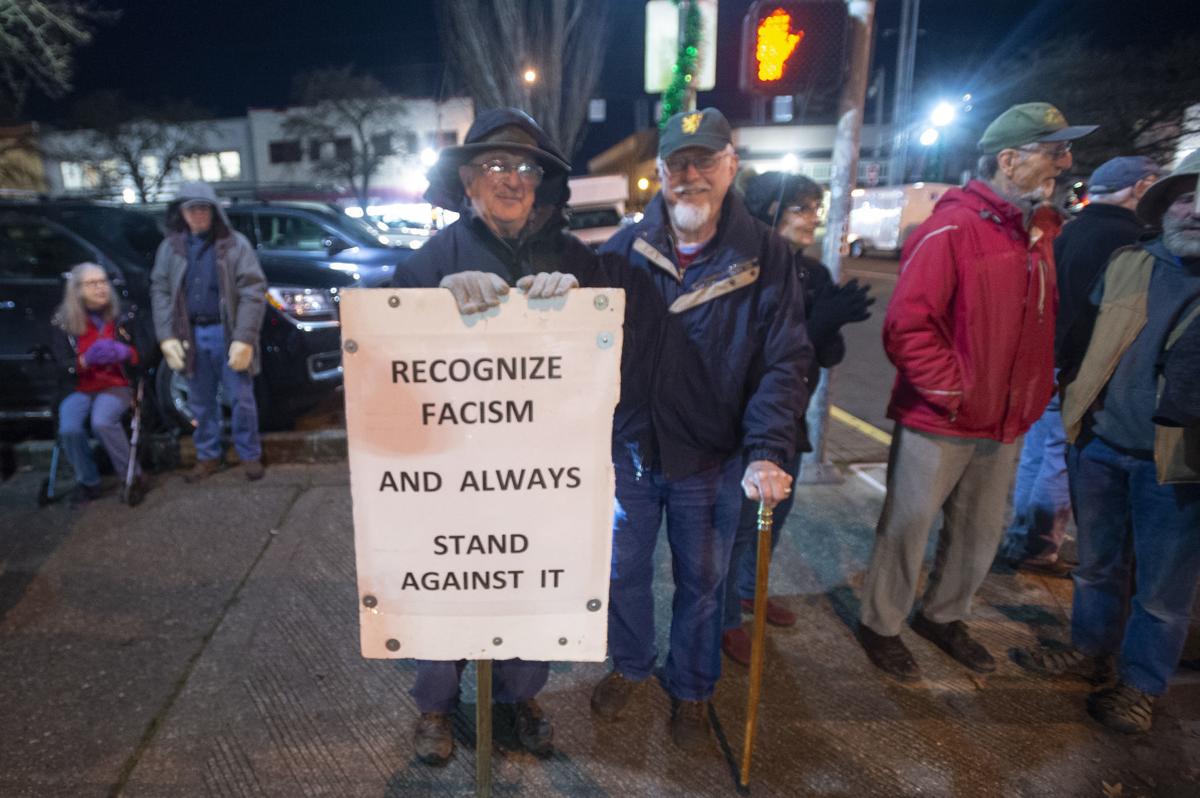 People rally Dec. 17 in support of the impeachment of President Donald Trump along the boardwalk in Coos Bay. 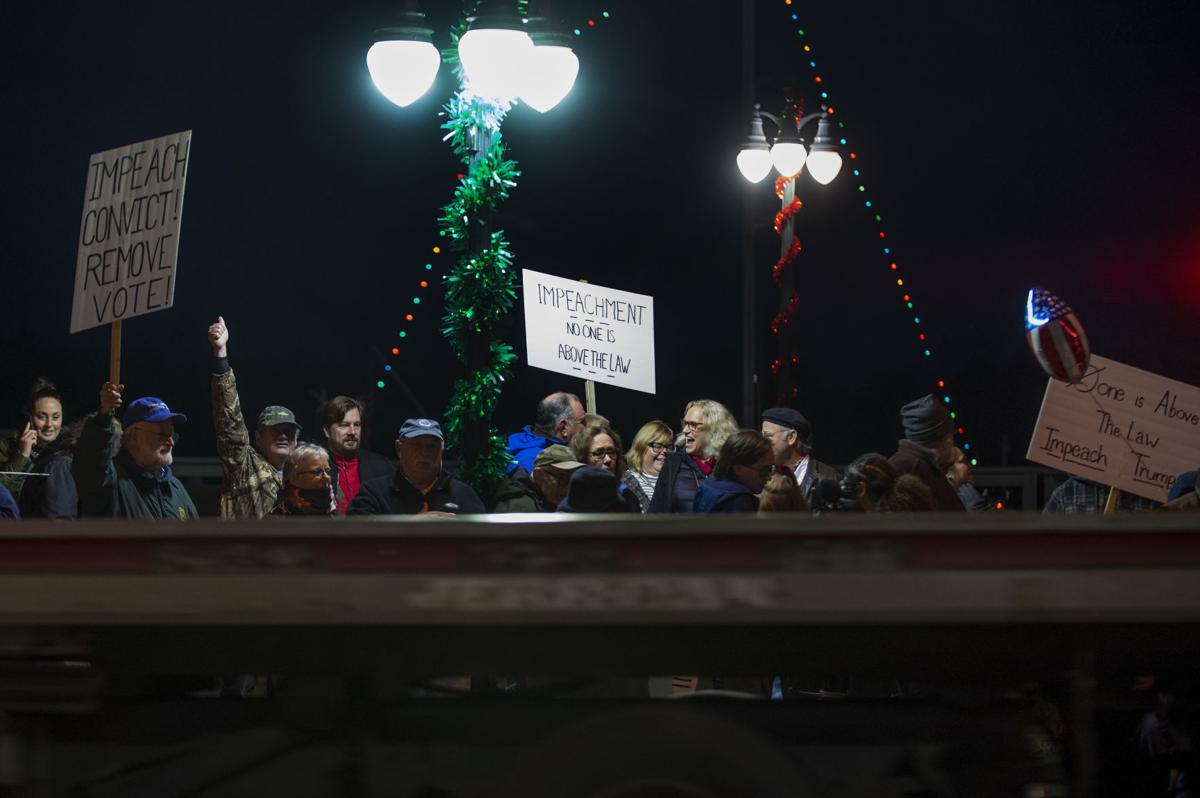 People rally Dec. 17 in support of the impeachment hearings of President Donald Trump along the boardwalk in Coos Bay. The rally, which drew about 100 people, was part of a nation-wide movement supporting the ongoing the trial. Trump was impeached by the House of Representatives Wednesday.

SOUTH COAST — In an historic vote, the House of Representatives voted to impeach President Donald Trump on Wednesday on charges of abuse of power and obstruction of Congress. Local political activists and area representatives expressed mixed opinions.

U.S. Sen. Jeff Merkley, D-Ore., noted that the founders created the impeachment process out of concern that foreign influence could corrupt American democracy, and that a president could attempt to use his power to become a king.

People rally Dec. 17 in support of the impeachment hearings of President Donald Trump along the boardwalk in Coos Bay. The rally, which drew a…

"For these two reasons, the founders placed in the hands of Congress the means to act as a check on a corrupt president: Impeachment in the House, followed by a trial in the Senate," Merkley said. "Today, the House fulfilled its constitutional responsibility."

He added that the House of Representatives laid out facts "that should be alarming to anyone who cares about the integrity of our elections or the rule of law" and that a compelling case was presented for the idea that President Trump solicited foreign interference in the 2020 election, and tried to use his power as president to advance his own interests. He said he feels that, with their vote, the House concluded these actions are significant enough to begin a Senate trial.

Rod Schilling, county chair of the Coos County Republican Party, was opposed to impeaching the president, saying the whole process was phony.

"It doesn't mean anything and who cares," he said. "Anyone who thinks it was fair is either part of it or deluded."

Mo Aakre, chair of the Coos County Democratic Party, said the CCDP is supportive of the House's votes in favor of impeachment. She said they believe the evidence has been overwhelming for both charges.

"Article one is abuse of power for pressuring Ukraine to assist President Trump in his re-election campaign by trying to damage his political rival, Vice President Joe Biden," Aakre said. "The second article charges President Trump with obstruction of Congress evidenced by his blocking testimony and refusing to provide documents in response to House subpoenas in the impeachment inquiry. The testimony of the witnesses was overwhelmingly clear and convincing. The behavior cannot be ignored. The president is not a king."

U.S. Rep. Peter DeFazio, D-Ore., voted in support of impeachment. He said it's the most serious responsibility of Congress and not something he takes lightly. He added that the case was clear that President Trump violated his oath of office, betraying the Constitution and the American people.

People rally Dec. 17 in support of the impeachment hearings of President Donald Trump along the boardwalk in Coos Bay. The rally, which drew a…

"He has admitted to soliciting assistance from a foreign leader to interfere with our elections and to aid his political campaign," DeFazio said. "His own chief of staff has admitted that he withheld congressionally approved taxpayer dollars to blackmail the Ukrainian president and leverage aid to his own campaign. These are impeachable offenses."

DeFazio noted the evidence uncovered by the Judiciary Committee's investigation of bribery and wire fraud. He said the findings show President Trump to be a threat to national security and the foundations of the United States' democracy.

"While I will be voting in support of the articles of impeachment today, it is important to note that Congress's oversight does not stop here," he said. "I will push for further scrutiny to continue its investigations into the president's potential violations of the emoluments clauses of the Constitution and to enforce our constitutional subpoenas in the courts."

U.S. Sen. Ron Wyden, D-Ore., noted that the hearings now proceed to the Senate and that Senate Majority Leader Mitch McConnell has vowed to ban witness testimony and "starve the process of useful information or inquiry." He said this is a path the inquiry should not take for justice to be done and added that the American people deserve to hear all the facts, weigh all arguments, and watch the representatives go through the hearing.

"I take that oath as seriously as anything I have done as a member of the U.S. Senate," Wyden said. "I will use my role as a juror to push with all my strength, every day, for a fair, open and thorough process."

Merkley agreed that he found it disturbing that McConnell was already saying he would work alongside the White House, rather than conduct an open and transparent fair trial. He noted that at the start of the trial, the Senate swears an oath to "do impartial justice according to the Constitution and laws" and added that the oath is to neither the President or their political party.

Merkley offered a hope that all Senators consider their grave responsibility and rise to the occasion with facts, fairness and the integrity the nation deserves.

CCAT’s free shuttle service to the Roseburg VA Medical Center will come to an end on Dec. 31 as funding for the service runs out.