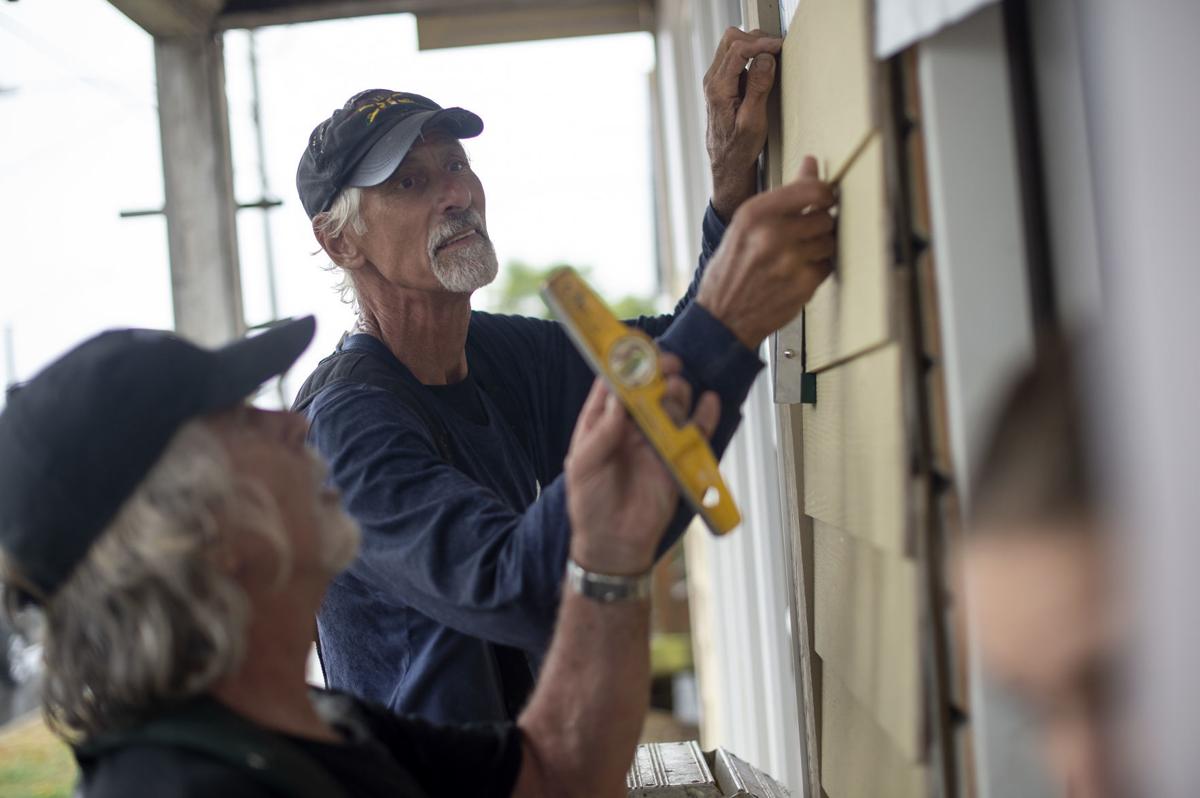 Tim Brueckner, left and Tony Jakacky work with dozens of other volunteers hanging siding at Bryan's Home in North Bend on July 9. 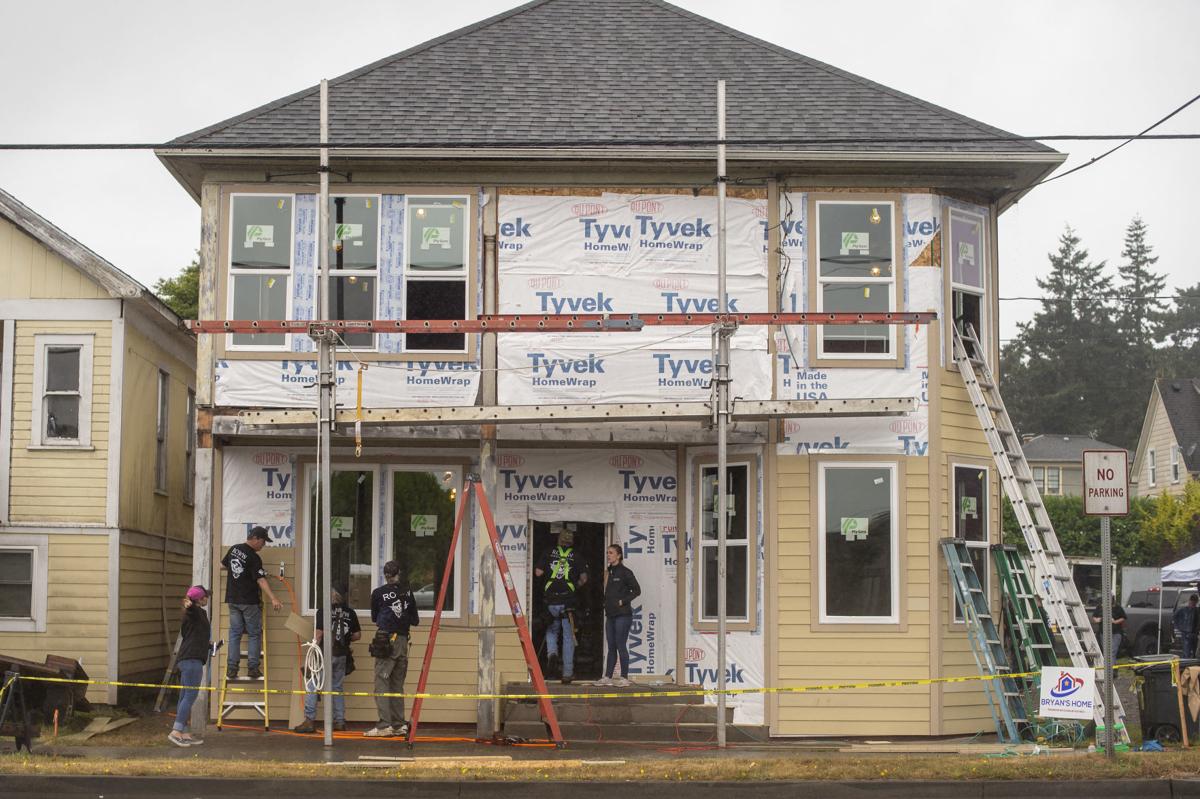 Dozens of other volunteers from Operation Rebuild Hope, Reach Out World Wide, McCormick & Son Construction and Juul Insurance Agency work outside of Bryan's Home in North Bend on July 9. 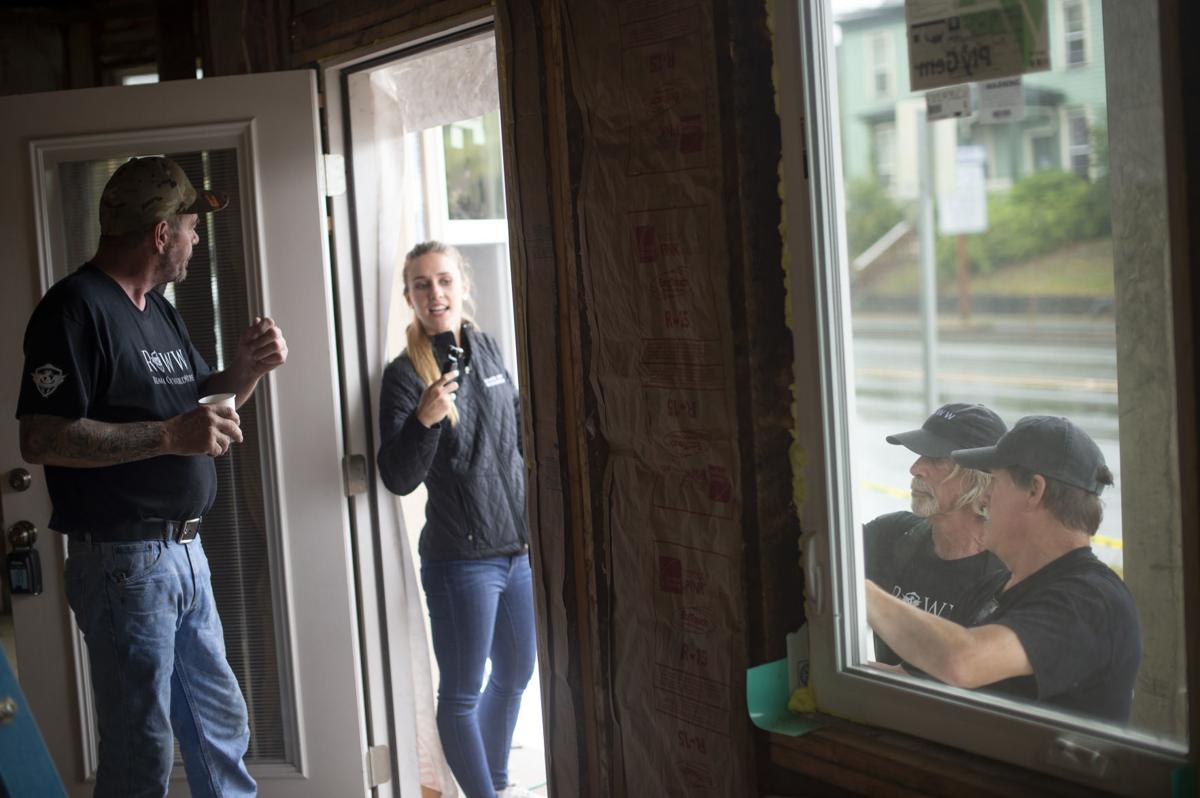 Empty for decades, a large house along U.S. Highway 101 takes shape near in North Bend on July 9. Dozens of volunteers converged recently to help Operation Rebuild Hope hang siding on the building, which will become Bryan's Home, housing for veterans of the U.S. Military. 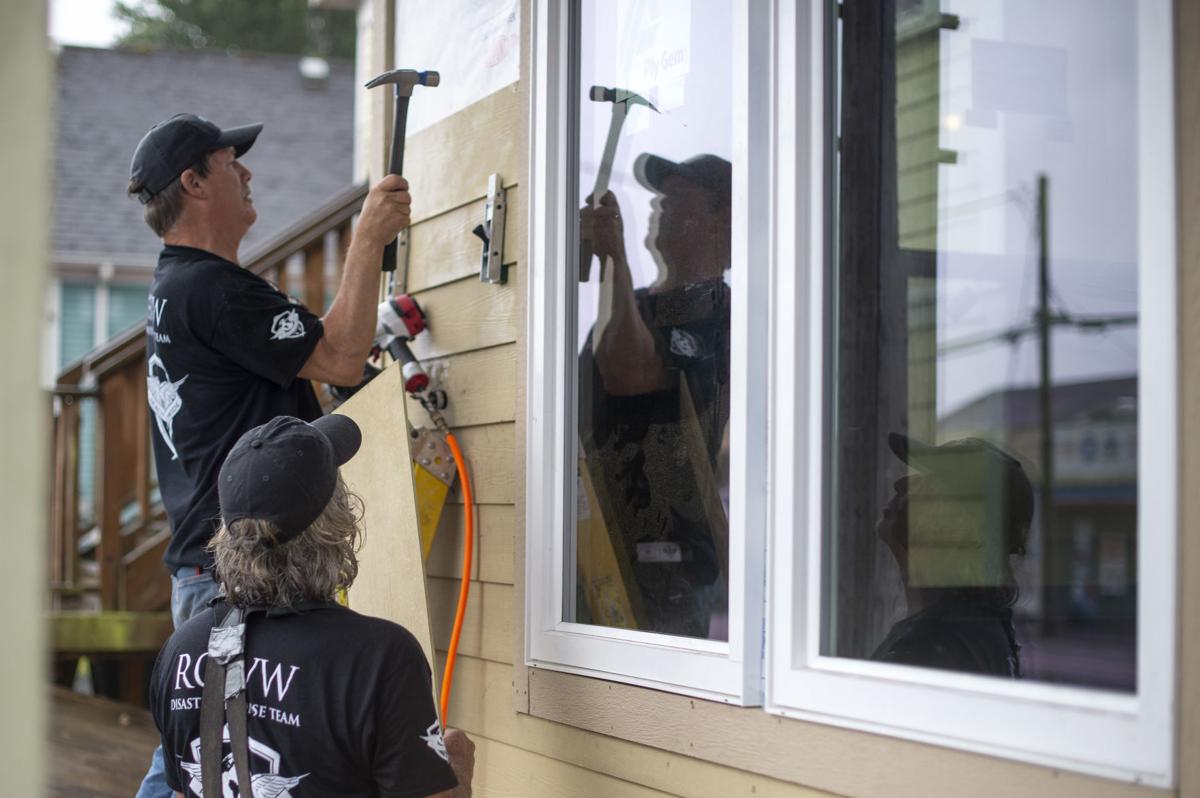 Tim Brueckner, left and Tony Jakacky work with dozens of other volunteers hanging siding at Bryan's Home in North Bend on July 9.

Dozens of other volunteers from Operation Rebuild Hope, Reach Out World Wide, McCormick & Son Construction and Juul Insurance Agency work outside of Bryan's Home in North Bend on July 9.

Empty for decades, a large house along U.S. Highway 101 takes shape near in North Bend on July 9. Dozens of volunteers converged recently to help Operation Rebuild Hope hang siding on the building, which will become Bryan's Home, housing for veterans of the U.S. Military.

NORTH BEND — With the hopes of bettering the lives of veterans across the South Coast, Patrick Wright has made it his mission to do all he can to make sure no veteran is left behind.

Operation Rebuild Hope, the nonprofit organization founded by Wright, aims to improve the quality of life for veterans undergoing a number of personal challenges.

For the past three years, the North Bend-based organization has helped countless veterans throughout the county regain a sense of purpose and belonging by engaging them in home repairs and connecting them with fellow veterans.

It’s also one step closer to completing its first major restoration project Bryan’s Home, a transitional home for homeless veterans looking to get back on their feet.

“What’s saving me on this project is the overwhelming support we’re getting from the community,” said Wright. “People want to help.”

Thousands of people have volunteered for the organization over the years and numerous businesses and local contractors have donated a wide array of materials and supplies needed to get Bryan’s Home off the ground.

Most recently, the organization has partnered with Reach Out Worldwide, a nonprofit international organization, which donated nearly $20,000 in building materials and had dozens of their own volunteers come down to help install siding at Bryan’s Home.

The majority of its volunteers, which mainly consist of veterans, usually assist on repair projects after hearing the organization’s call to action on one of its social media platforms, said Wright. Some of its volunteers are first timers, but many are familiar faces who have contributed hours and hours of work.

“We do keep track of everyone’s hours,” said Wright. “If they complete 122 hours then they become an alumni volunteer with us and we award them with a black volunteer T-shirt which can only be earned.”

The number 22 is representative of the number of veterans who die by suicide each day in the U.S., said Wright. The attention to the number helps create an awareness of the alarming death rate among veterans and shines a light on the growing problem.

“What we’re doing is saving lives,” said Wright. “One of our veterans that we helped handed us a bullet the other day and said he didn’t need it anymore. It’s the veterans that keep us motivated and wanting to let them know hey you are still important and you still have to ability to do important things.”

Bryan’s Home is expected to be completed in about a year, he added. The hope is that the project will be a jumping-off point for other big plans the group has in mind such as creating a more permanent housing solution for veterans and a possible trade school with longtime community partner McCormick and Son.

Kyle Brown, a co-founder of ORH, said it’s the testimonies from veterans that motivates him to continue volunteering with the group and keeping its mission alive.

“For me it’s the sincerity coming from the vets not just being served but serving,” he said. “We had a really good friend of ours who doesn’t really show too much emotion break down and cry saying how much ORH has done for him and what it’s meant to him.”

The veteran he said has been volunteering with the two since the organization began three years ago and that seeing the impact it has had is a great reminder of why they began the project to begin with.

Both former U.S. Marines and Marshfield High School graduates, Wright said being a part of the community has certainly helped ORH get the support it needs.

For those looking to volunteer or contribute to ORH, can visit its Facebook page or its website at https://operationrebuildhope.org/. The group is looking to recruit volunteers with clerical experience to its office in downtown North Bend.

Volunteers and service groups help out the neediest of our neighbors. With their tireless efforts and your support, the South Coast is a bette…

Over 20 local veterans and their families received a free meal basket Tuesday from Bryan’s Home as part of their inaugural Thanksgiving event.