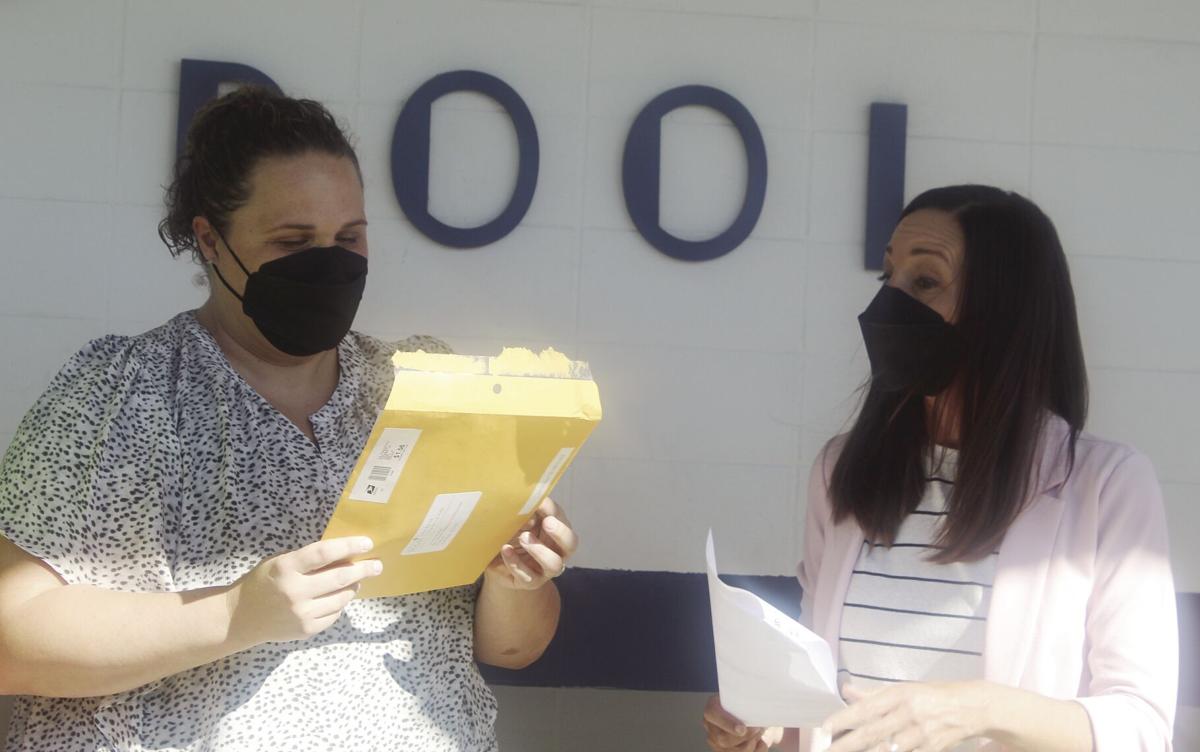 As Mayor Jessica Engelke, right, look on Pool Manager KayLee Marone, left, reads a letter from the Judith Ann Mogan Foundation telling the city the foundation awarded a $375,000 grant to pay for repairs and upgrades to the pool. 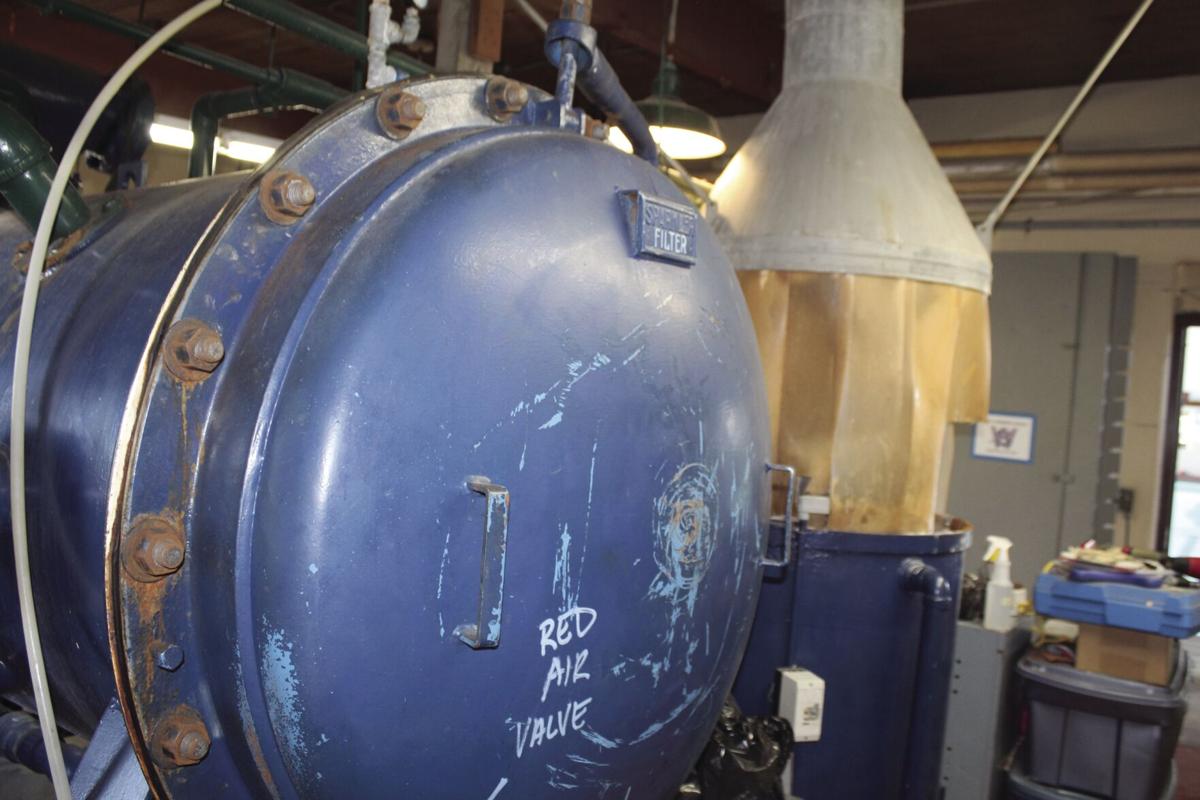 The grant from the Judith Ann Mogan Foundation will replace the pools filtration system that is mostly original from when the pool opened in 1956. 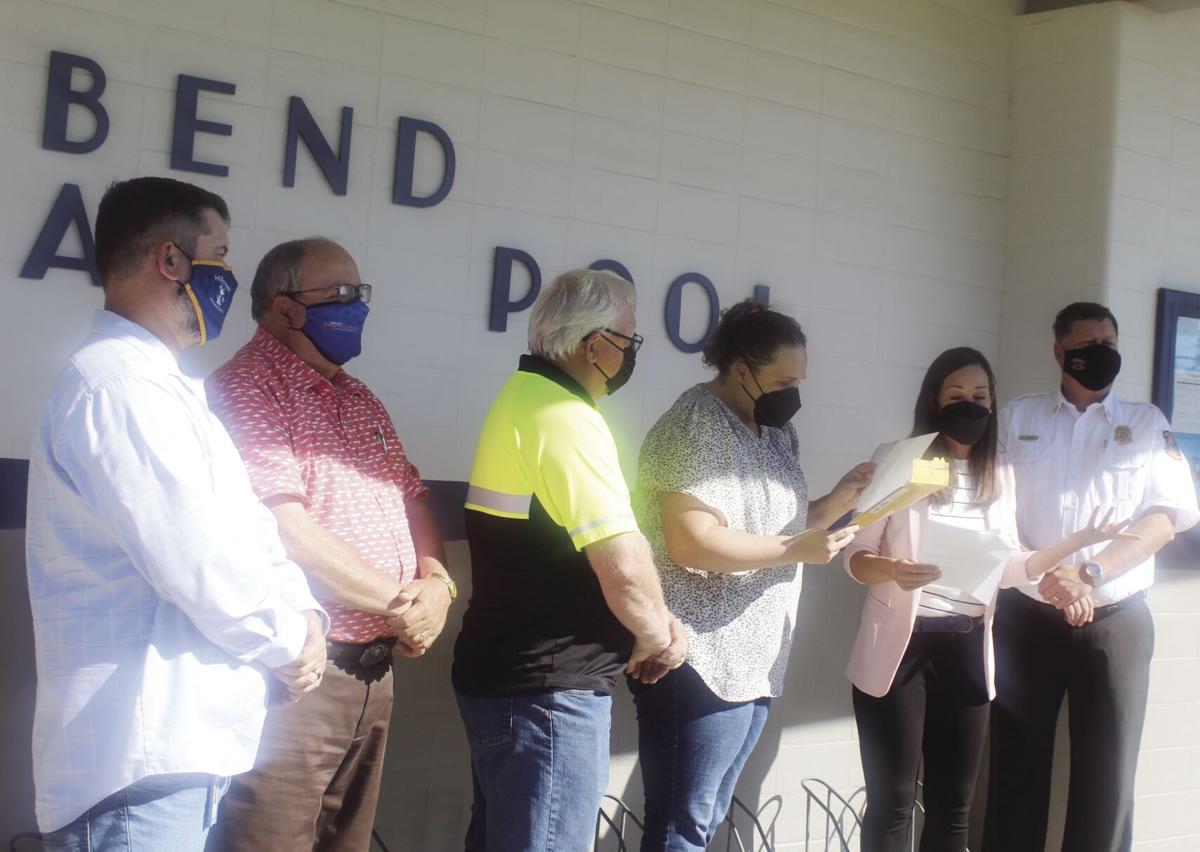 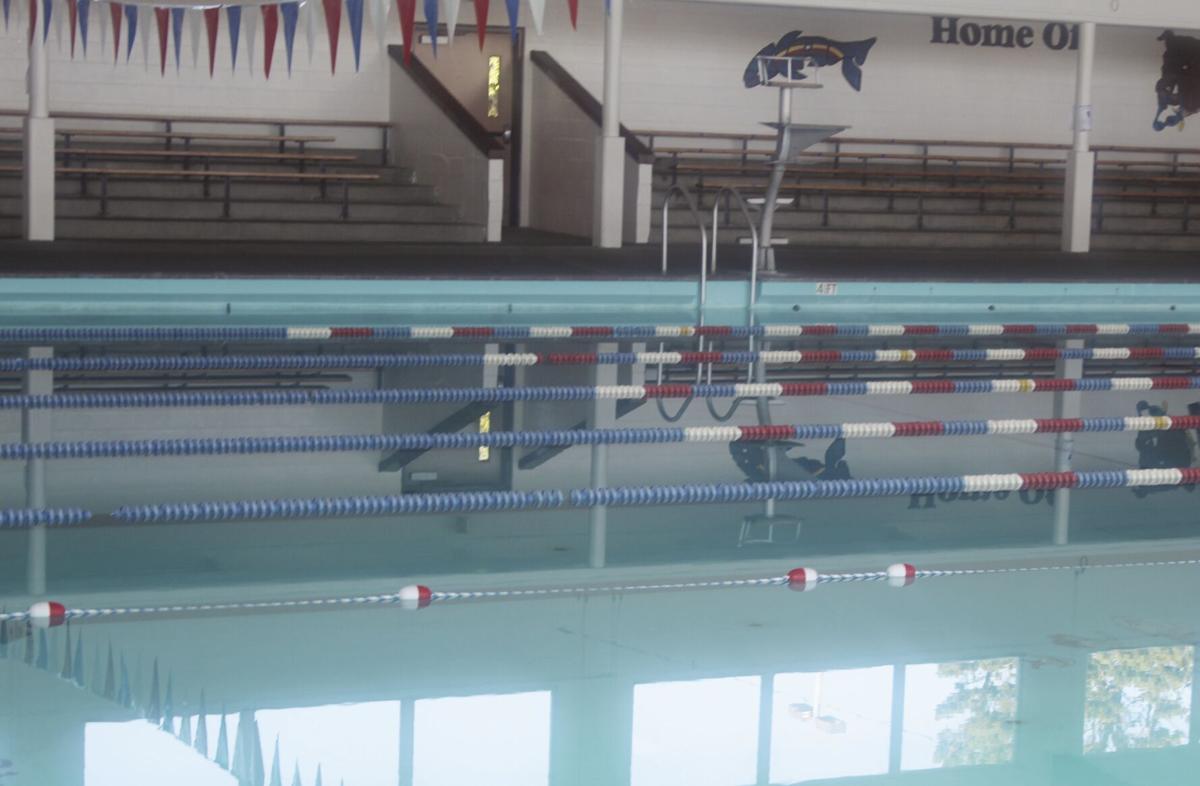 The North Bend City Pool will close at the end of September to allow major upgrades to be made.

As Mayor Jessica Engelke, right, look on Pool Manager KayLee Marone, left, reads a letter from the Judith Ann Mogan Foundation telling the city the foundation awarded a $375,000 grant to pay for repairs and upgrades to the pool.

The grant from the Judith Ann Mogan Foundation will replace the pools filtration system that is mostly original from when the pool opened in 1956.

The North Bend City Pool will close at the end of September to allow major upgrades to be made.

A few months ago, the North Bend City Pool was on life support.

After being closed for more than a year due to COVID-19 restrictions, the North Bend City Council included no funding in the 2021-22 budget for the pool. It was up to voters to decide whether the pool was worth keeping.

In May, a tax levy was voted on and easily approved by voters, giving the city funding the run the pool. When the levy passed, the city council made a promise – major repairs and upgrades needed to make the pool operable for years to come would be completed one way or another.

Since the vote, a slew of good news has come in regarding the pool. First, the Oregon Community Foundation gave the city $187,000 to fund pool operations over the summer and to make minor repairs at the facility.

In less than three months, 12,000 people have used the pool, even after new COVID restrictions forced the city to cut back on the number of people allowed inside.

In Monday, another bit of good news came when KayLee Marone, who runs the pool while also serving as city recorder, opened a letter from the Judith Ann Mogan Foundation, where the foundation revealed it was giving the city a $375,000 grant to completely pay for the upgraded needed inside.

As Marone opened the letter, she was surrounded by Mayor Jessica Engelke and Councilors Eric Gleason, Timm Slater and Bill Richardson. Engelke told a group watching the presentation live that no one knew what the letter would say.

“We received a letter today,” Engelke said. “We have no opened the letter, but we’re expecting really good news. We have been applying for grants for the pool and for all the repairs we have to make.”

As Marone read the letter out loud, the mood among the council members became celebratory.

City Administrator David Milliron said the Judith Ann Mogan Foundation and its gift to the city was an answer to prayer.

“We actually got a phone call from them,” Milliron said. “They started talking to us about city needs. Immediately what went to the top of my list was the city pool. We had exhausted every avenue to find money for the city pool.”

When the pool opened in July, North Bend announced a plan to have the pool open for free for three months, with the pool then closing for three months to do the needed repairs. Before the grant approval was received, Milliron said the city was looking at borrowing the money to pay for the repairs.

“It takes care of everything we said we would do in phase one,” Milliron said. “It’s a Godsend.”

The Judith Ann Mogan Foundation actually has strong ties to the area, so it is fitting one if its early grants was for a Bay area community.

Judith Ann Mogan was the daughter of Al Pierce, a businessman who made his early mark in Coos County. In the 1930s, Pierce owned a business that supplied piling materials for the construction of the McCullough Bridge on Highway 101 as you enter North Bend.

Pierce later expanded his business to the Al Pierce Lumber Company, which owned thousands of acres of timberland and supplied raw materials to its mills.

When the timber industry began to suffer, the company downsized and became Al Pierce Co., which was then run by Hilda Pierce and Mogan. The two became strong supporters of programs related to youth development and education, starting a philanthropic effort that continues with the foundation.

In 2020, Al Pierce Co. made the decision to sell its timberlands to Lone Rock Timber of Roseburg, with much of the money being used to start the Judith Ann Mogan Foundation. The grant to North Bend was among the first grants awarded.

The funding will be used for several primary projects at the pool:

Those two steps will bring the pool up to date and will allow it to operate more efficiently for the foreseeable future.

The North Bend Pool will remain open through the end of the month. Marone said with the funding now in place, North Bend will soon begin looking for a company that can do the work. The pool will close October 1 and remain closed for the rest of the year. During that time, all the work is expected to be finished.

A re-grand opening will be held January 1, with the upgraded and fully funded pool ready to serve North Bend residents for generations to come.