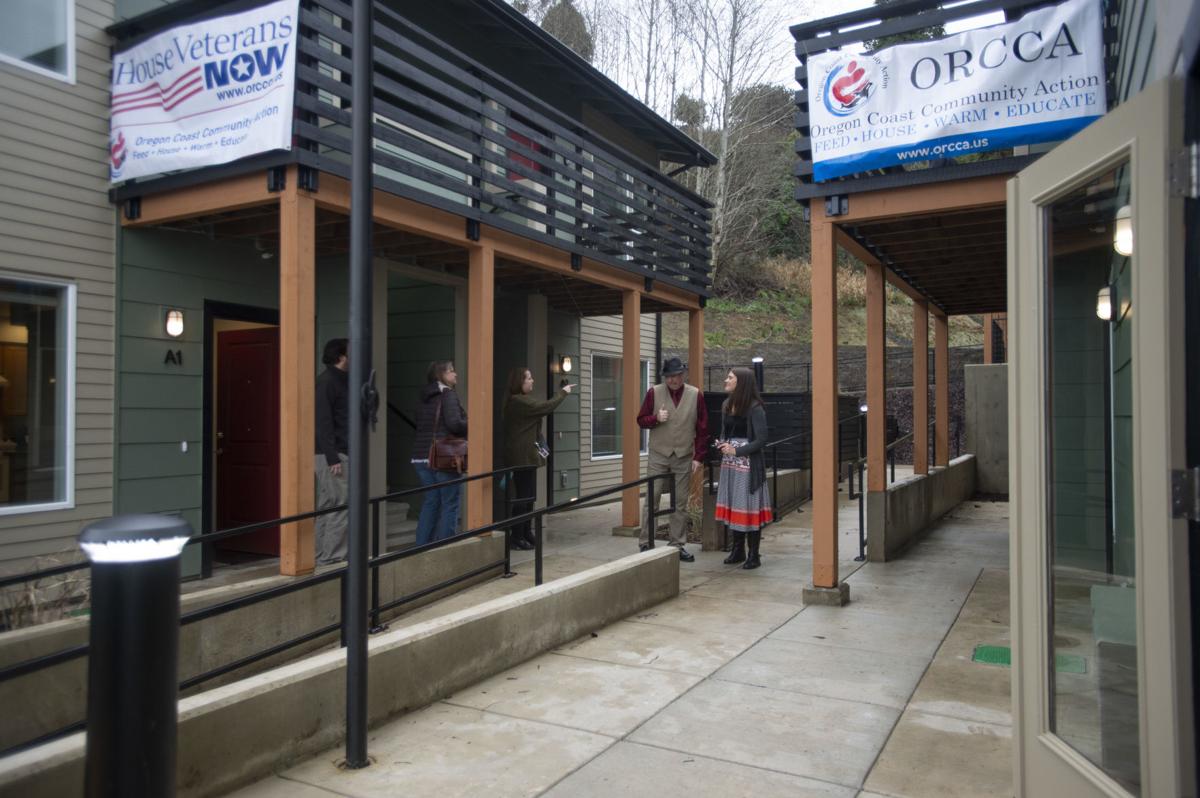 People get a look around the newly complete Deer Springs Terrace during a grand opening of the veteran's apartment Friday in North Bend. The Oregon Coast Community Action project is the first low-income housing development to open on the South Coast in almost 20 years. 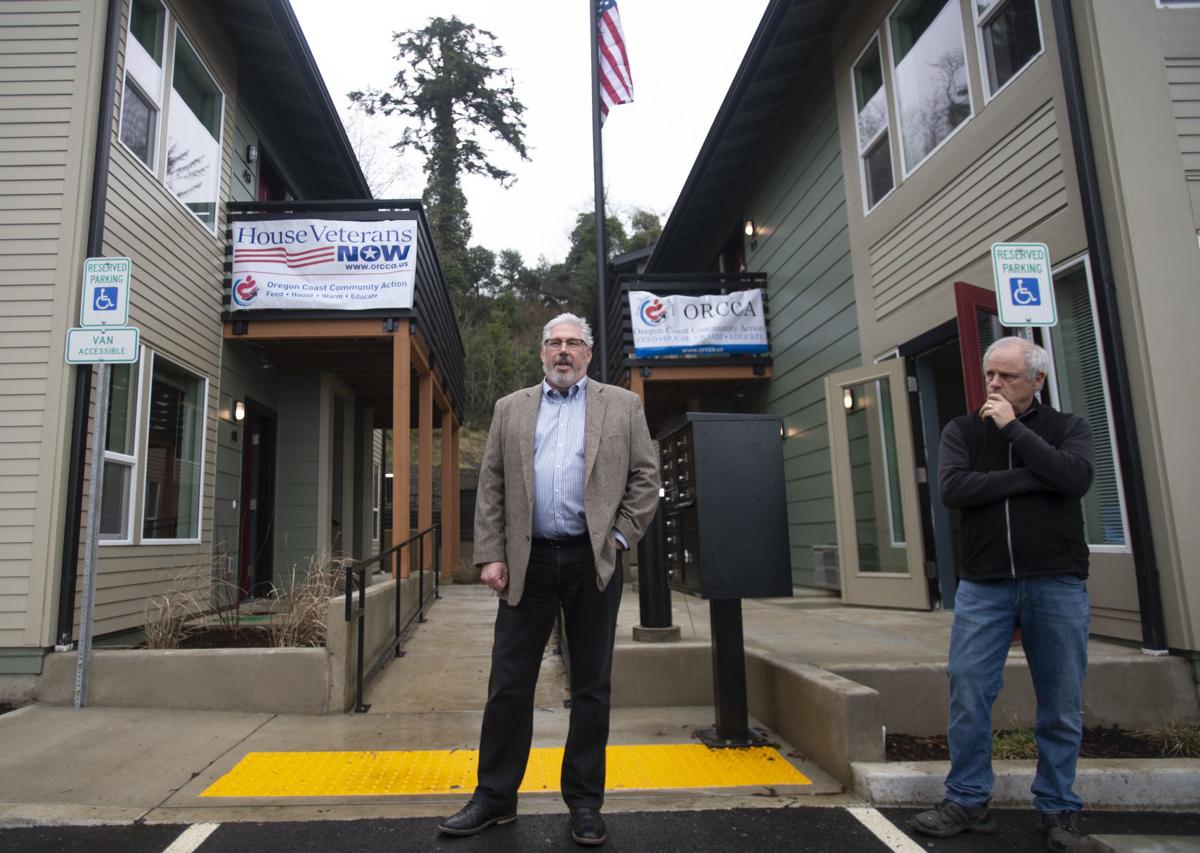 An architect speaks alongside Mike Lehman (on right), outgoing executive director of Oregon Coast Community Action, during a grand opening of the low-income veterans housing complex Deer Springs Terrace in North Bend. The Oregon Coast Community Action project is the first low-income housing development to open on the South Coast in almost 20 years. 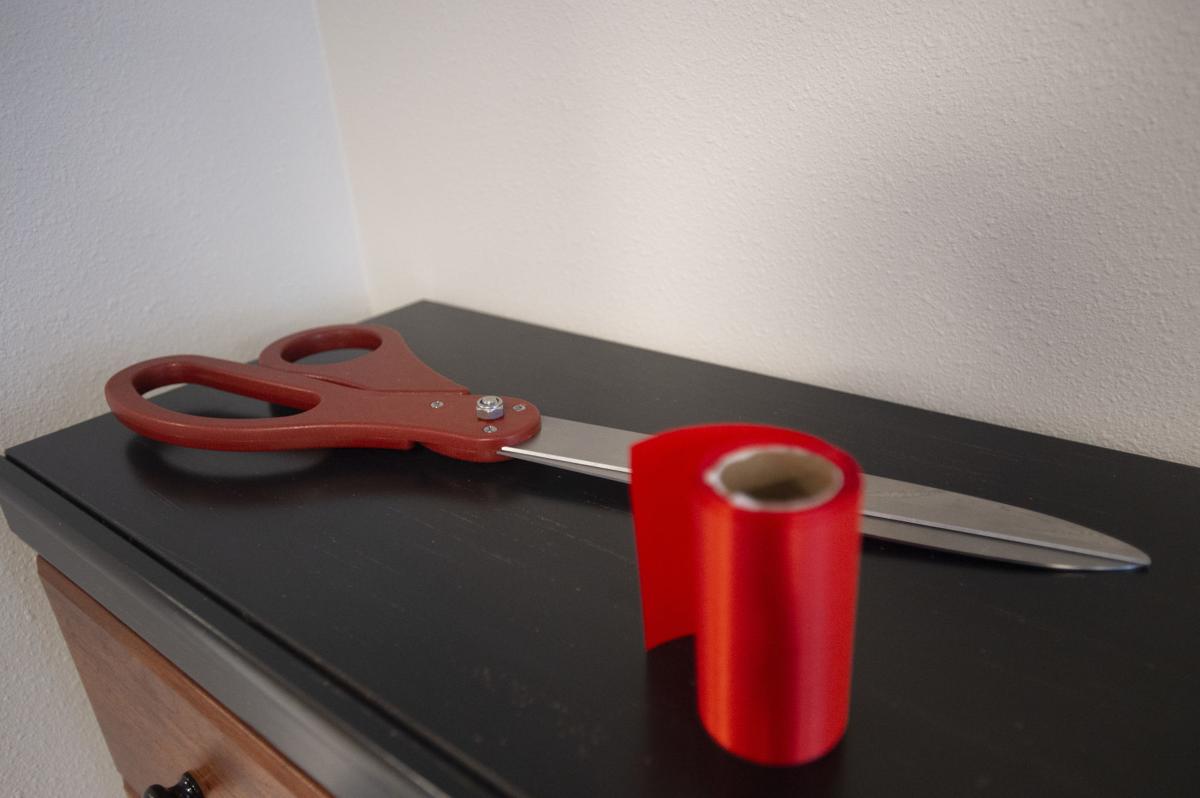 Agiant scissor and ribbon during a grand opening ceremony at the low-income veterans housing complex Deer Springs Terrace in North Bend on Friday. The Oregon Coast Community Action project is the first low-income housing development to open on the South Coast in almost 20 years. 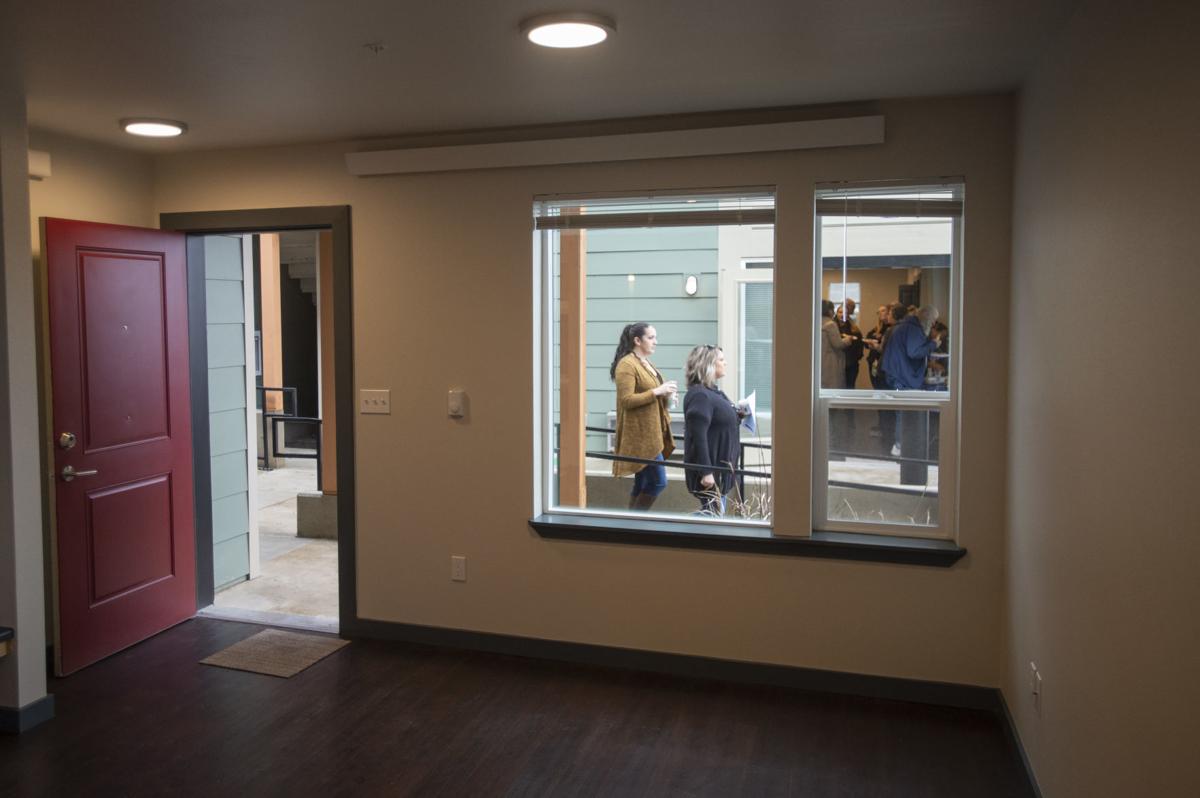 People get a look around the newly complete Deer Springs Terrace during a grand opening of the veteran's apartment Friday in North Bend. The Oregon Coast Community Action project is the first low-income housing development to open on the South Coast in almost 20 years.

NORTH BEND — Homeless veterans now have an easier way to get off the streets.

Oregon Coast Community Action opened its Deer Springs Terrace long term housing on Friday, Jan. 24. The North Bend location was seven years in the making and will be one spoke in the wheel helping homeless and at-risk veterans get back on their feet.

An architect speaks alongside Mike Lehman (on right), outgoing executive director of Oregon Coast Community Action, during a grand opening of …

“The Timberwolves Den is part of this wheel,” said Jeremy Matsui, ORCCA’s essential services director. He referenced the transitional housing that opened in March last year with the help of Bryan’s Home, the final spoke in the wheel he described and another place for homeless veterans to land once the house opens later this year. Bryan’s Home is also working in coordination with Deer Springs Terrace.

Deer Springs Terrace is the first low-income housing development to open on the South Coast in almost 20 years. ORCCA Executive Director Mike Lehman pointed to the last supportive housing project, which was built back in 1995.

“We were due to have another development,” Lehman said.

The new Deer Springs location is an 11-unit apartment complex, providing permanent housing for veterans. However, one of the apartments will be for an on-site manager.

Veterans who move into Deer Springs will also benefit from wrap-around services to help them stabilize and adjust to life off the streets.

“Veterans coming in have a lot more barriers and challenges than a normal tenant,” Matsui said. “For their longevity and successful long-term housing, we have to have partnerships with the (Veteran’s Affairs), county mental health and other services.”

As Matsui explained it, the Timberwolves Den will provide emergency housing for veterans needing to get off the streets immediately and then transition to either Deer Springs or Bryan’s Home.

“When you deal with crisis housing, people make progress and a lot of them backslide and it’s difficult to have to tell someone that they and their kid violated the rules,” Lehman said. “All the things they built like having a bed, towels and to lose that and be back on the streets just to start the cycle all over again is hard.”

But Lehman said that won’t be what happens with people searching for a way into stable housing. If someone violates a rule, they won’t be back on the street but rather back at the Timberwolves Den.

“Not only that, but if you take someone who was living in their car and put them in an apartment where they don’t have supplies to cook or a place to sleep … it’s harder for them to adjust,” Lehman said and pointed to a study done in Portland where it was found that veterans in new housing gravitated back to the streets if they didn’t have the usual amenities like television. “Life on the street has its own drama so you want to set them up so they have entertainment at home.”

David Navarro, ORCCA’s director of fundraising and grant coordination, said that there are already people moving into Deer Springs Terrace as soon as next week.

“That is an incredibly low number in what we would perceive as hundreds of veterans who are unhoused, homeless or are in unstable transitional homes,” Lehman said.

People get a look around the newly complete Deer Springs Terrace during a grand opening of the veteran's apartment Friday in North Bend. The O…

In a housing study done on the South Coast two years ago, Lehman pointed out how it showed a perfect model as having little pockets of supportive housing rather than one large complex.

“If you have a 50-unit complex, it impacts the neighborhood and people get upset but by having little pockets in the community it isn’t overwhelming and doesn’t have a negative impact,” Lehman said.

When asked if ORCCA would expand Deer Springs down the road, Lehman said not at that location and not even in Coos County.

“If we do that, it will be targeted in Gold Beach,” he said. “These units will help our population.”

At the grand opening on Friday for Deer Springs, a color guard started off the short program, followed by guided tours for the community.

“(Deer Springs Terrace) sits on Monroe Avenue overlooking Pony Slough with proximity to North Bend City Center,” read a press release from ORCCA about the grand opening. “The development exemplifies the ‘housing first’ model – a nationally recognized concept. Permanent, affordable housing provides the stability necessary for homeless and at-risk veterans to access require support for an improved quality of life. Resident management services will be located on site and residents will also have access to the nearby VA North Bend Clinic.”

In the release, Lehman said it took a lot of work with community partners to make this project come together.

“It will be a great addition to serve veterans on the South Coast,” he said.

The City of Coos Bay plans to perform slash burning within the Pony Creek watershed. There may be several days where there is noticeable smoke in and around the city limits.