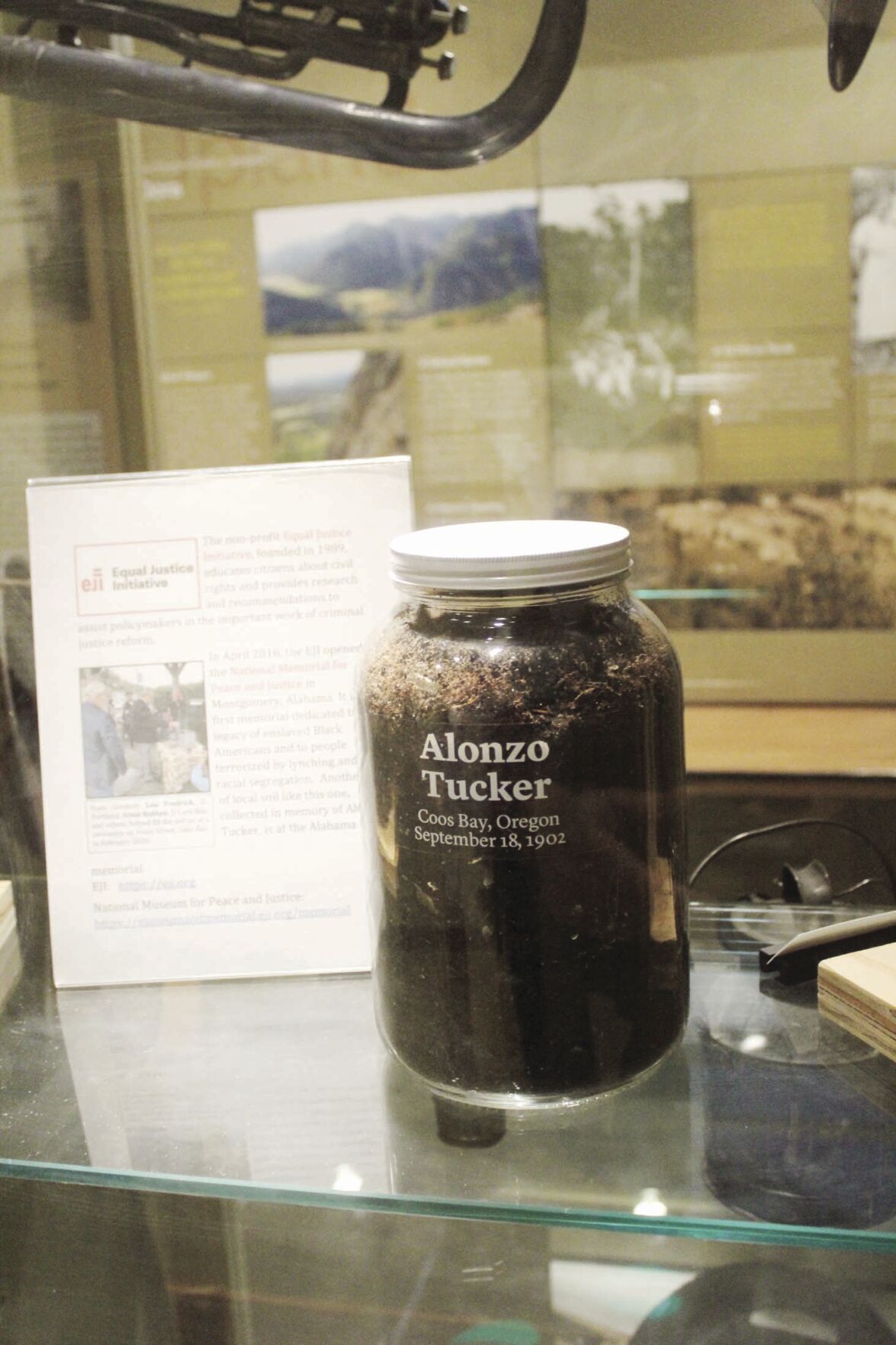 A jar filled with dirt is one step to memorialize Alonzo Tucker, who was lynched in Coos Bay in 1902. 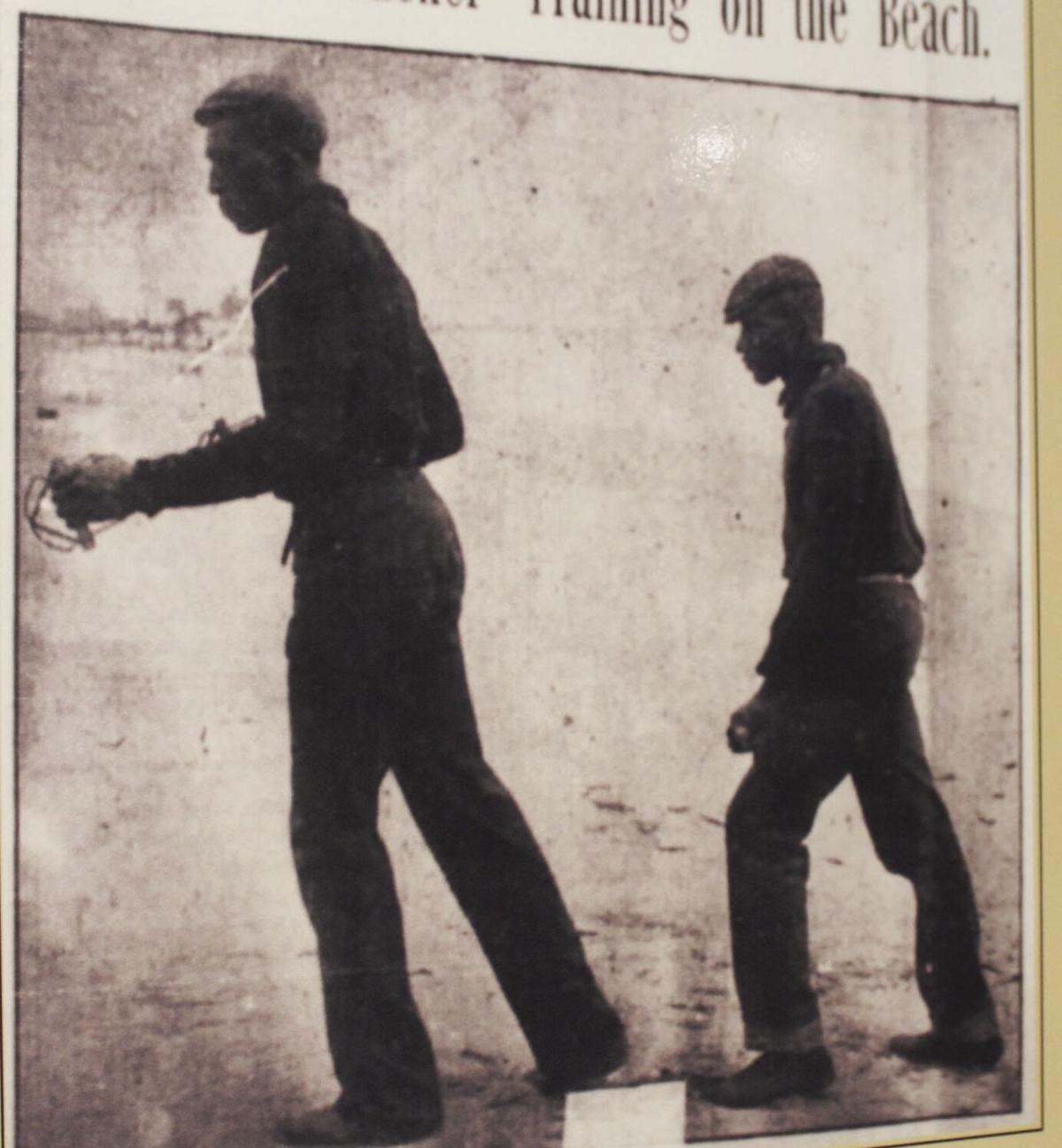 The only known photo of Alonzo Tucker, on right, is on display at the Coos History Museum.

A jar filled with dirt is one step to memorialize Alonzo Tucker, who was lynched in Coos Bay in 1902.

The only known photo of Alonzo Tucker, on right, is on display at the Coos History Museum.

For a community to grow, it must face its past, even the worst of its history.

On June 19, the Coos History Museum will help Coos Bay do just that when the museum hosts its first Juneteenth celebration. The highlight of the day will be the placing of a historical marker at the museum to remember the lynching of Alonzo Tucker.

In September 1902, Tucker was one of only a few black men living in Coos Bay, and he became the only person officially recognized as being lynched in Oregon.

Marcia Hart, executive director of the Coos History Museum, said Coos Bay has come a long way since 1902, but it must never forget its past.

“That’s one of the reasons we feel it’s important to bring it out to the community,” Hart said.

Hart said Tucker’s story is one Coos Bay should know because it’s part of the community’s story. As a history museum, Hart said both the good and bad should be part of the story it tells.

“Alonzo Tucker was a young black man who lived in Marshfield in the early 1900s,” Hart said. “On Sept. 18, 1902, there was an incident reported that he had allegedly accosted a white woman, and a group of miners were upset. An angry mob, they say close to 300 people, started in.”

The mob went to the jail and demanded Tucker be released to them, Hart said. Police tried to remove Tucker, with plans to put him on a boat to Roseburg. But when they reached the dock, the boat was not there.

“Alonzo Tucker escaped, hid under a dock during the night and then hid in a local hardware store,” Hart said. “The mob found him and shot him. They planned to lynch him on the 7th Street Bridge. He died on the way, but they hung his body on the bridge.”

No one was ever charged in the murder or lynching after it was determined Tucker was shot while escaping from police.

Hart said he never received justice legally, but the museum felt his story was one that should be told.

“We’ve always had the story in our museum,” she said. “We’ve had the story as part of our history here. What happened is about three or four years ago, the Equal Justice Initiative started looking at lynchings across the country.”

The EJI created the Community Remembrance Project where the EJI partners with communities memorialize victims of documented lynchings. The idea is not only to remember victims but also to help communities move forward.

The partnership between EJI and the Coos History Museum began several years ago with the idea of doing something to remember Tucker and his death. In February of last year, the museum and EJI worked together to do a soil sampling ceremony. The idea is to have remembrance and reconciliation.  Two jars of soil were filled. One was taken to EJI’s museum in Montgomery, Alabama, the second is at the Coos History Museum.

Hart said the ceremony was at a time of heightened racial awareness following the murder of George Floyd and protests around the country.

“It really polarized the significance of the Alonzo Tucker story in our community,” Hart said.

After the soil sampling, the city of Coos Bay asked the museum to determine the best location for a historical marker. The museum gathered a group of close to 30 people to help make the decision.

“Almost hands down, everyone agreed the museum is the spot,” Hart said. “We’re entrusted with the history of our town.”

The group then discussed what should be done to remember Tucker, and the decision was made to partner with EJI for a historical marker.

“A lot of the Black community wanted to bring our something of a celebration piece, bring out the culture of the community,” Hart said.

The group also decided Juneteenth would be the right time to unveil the marker, and EJI agreed. On that day, the marker will be unveiled in an invitation-only event, and the museum is planning an all-day celebration.

The museum will open free of charge from 11 a.m. to 5 p.m., and plans to have music, food and other items. A lot of the special things, including the marker, will be outside due to COVID-19 concerns, but the museum will be open for anyone who wants to walk through. Masks will be required for entry.

Ariel Peasley, education and community engagement coordinator for the museum, said she is excited about the historical marker and the opportunities it will provide for educating the community.

“I’m super excited about the celebration and I’m also excited about the education part,” Peasley said. “People don’t realize the Equal Justice Initiative is this huge organization. It’s not a random plaque we want to put up, but it’s connectivity and it’s connecting us around the country. It may have happened in Marshfield and Coos Bay in 1902, but it’s a bigger issue. It really is a great way to teach children about our history.”

The historical marker will be placed near the front door of the museum and will be available to be seen any time for free.

The museum has created a week-long celebration about Tucker and Juneteenth and invites the community to participate.

Witness: The unveiling of the Equal Justice Initiative Historical Marker acknowledging the lynching of Alonzo Tucker in Coos Bay and lynching throughout United States history. This portion of the event will be livestreamed.

Participate: Lend your words to our community word cloud. The museum invites event participants to help commemorate the event by contributing to a word cloud which will be made into digital artwork and a banner after the event. You can contribute online or in-person at the museum.