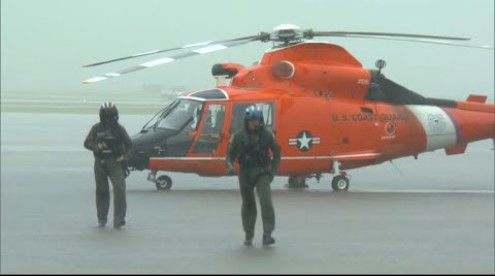 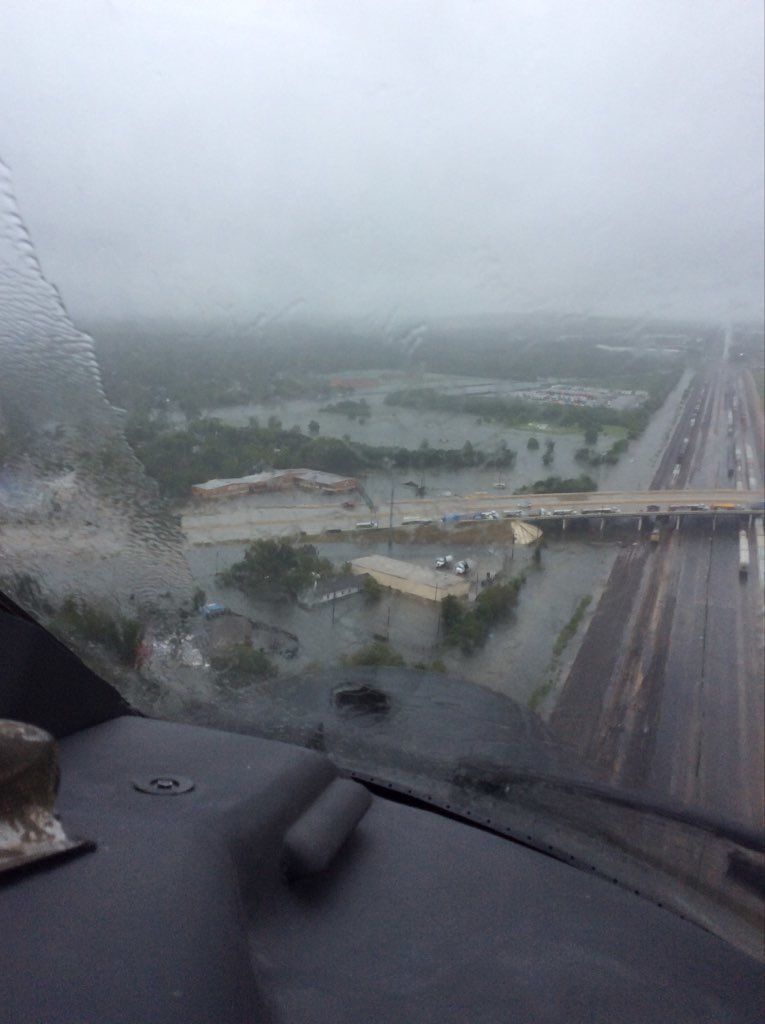 View from a U.S. Coast Guard helicopter of Houston, Texas during Hurricane Harvey. 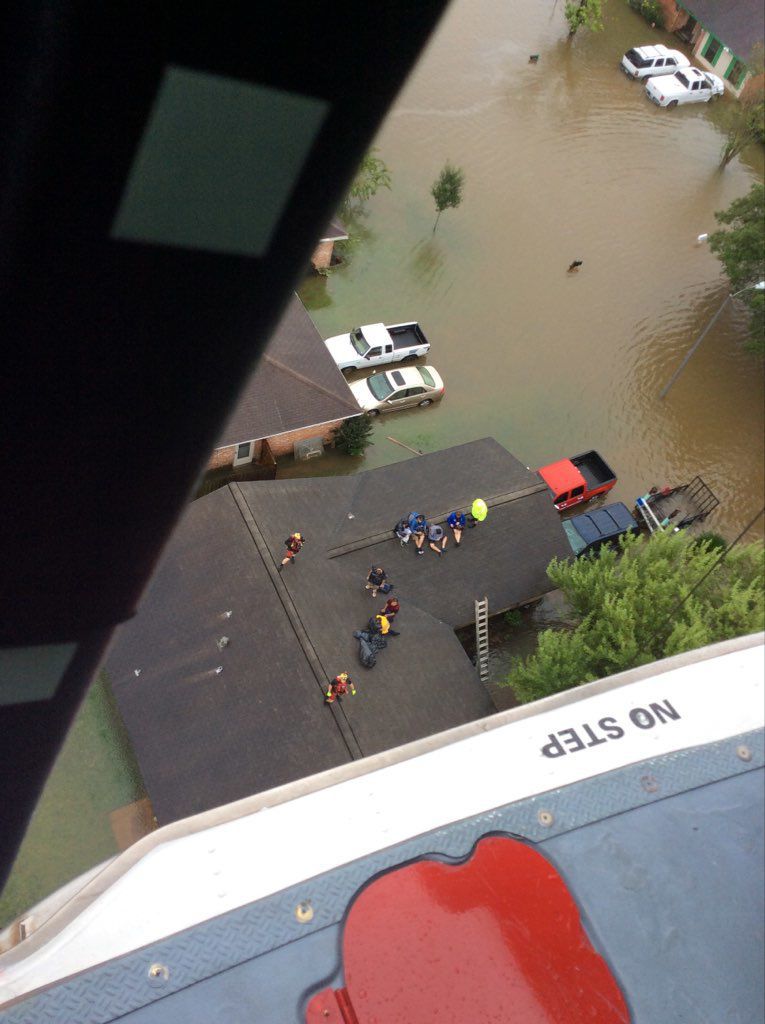 Lt. John Briggs received the Distinguished Flying Cross for his acts of heroism during Hurricane Harvey in Houston, Texas. 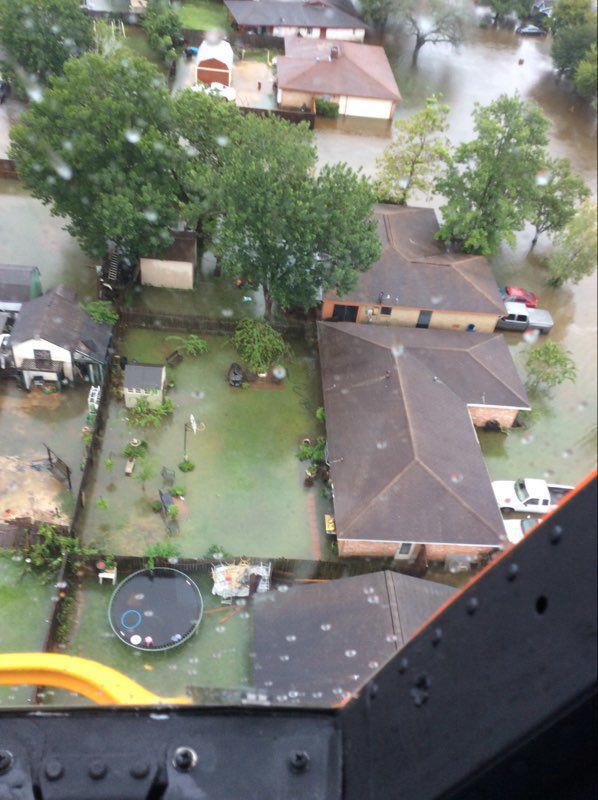 Lt. John Briggs sent The World photos taken during flight missions during Hurricane Harvey. Pictured is some of the devastation. 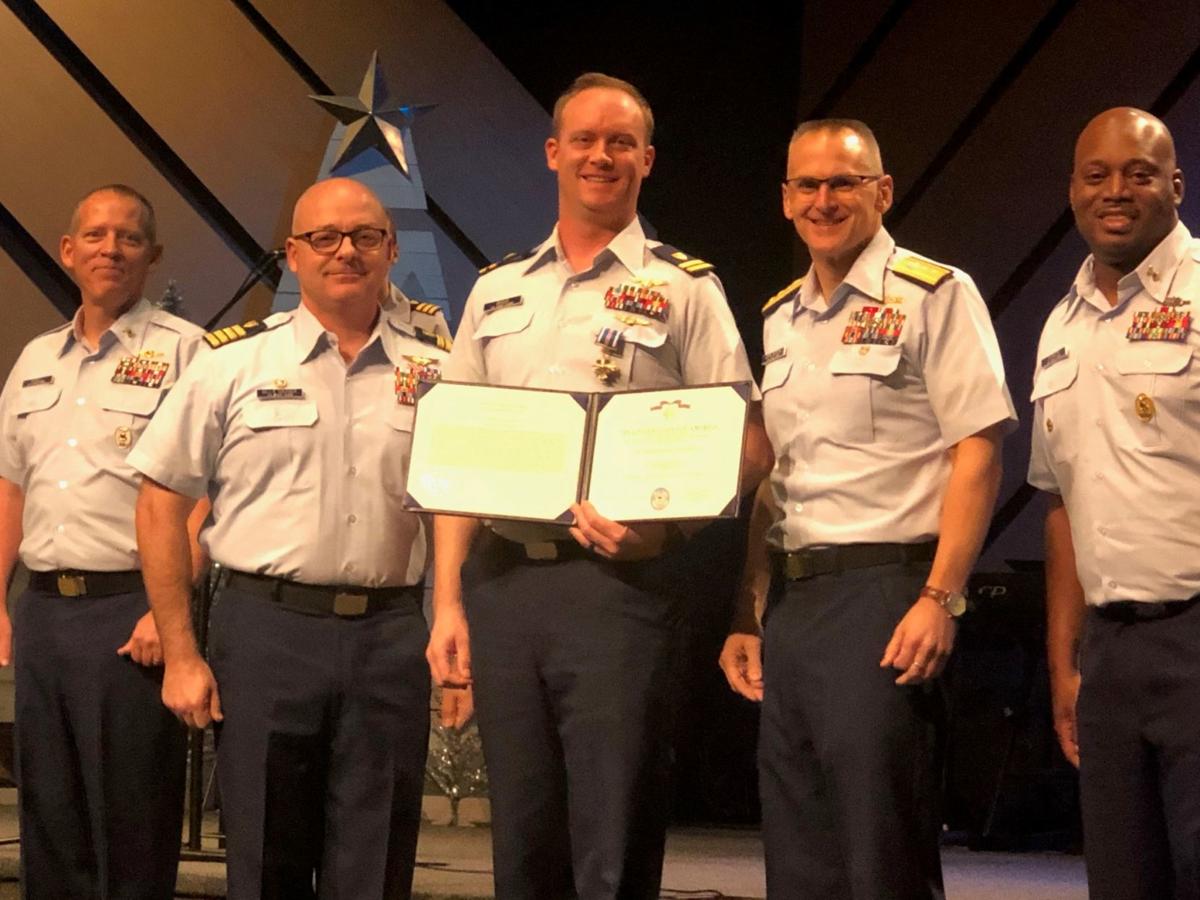 SOUTH COAST — A 1998 Marshfield High School graduate has earned one of the highest accolades in the U.S. Coast Guard: A Distinguished Flying Cross.

Lt. John Briggs, known as JJ to family and friends, received the medal for his heroism during Hurricane Harvey. He and the helicopter crew with him during the storm also hold the record for most souls hoisted onto an H-65 chopper.

“We had our crew of four, plus 14 survivors,” Briggs said. “Ten of them were babies.”

View from a U.S. Coast Guard helicopter of Houston, Texas during Hurricane Harvey.

But back when the category four hurricane was still brewing, Briggs didn’t know what would happen after he volunteered as a backup for search and rescue missions.

“Hurricane Harvey started out unpredictable,” Briggs remembered of the 2017 storm that devastated the Houston, Texas area. “At first, I wasn’t slated to be the first responder for the storm.”

Briggs was working at the Aviation Training Center in Mobile, Alabama at the time, where he was stationed as an instructor pilot taking new graduates and polishing them into competent search and rescue pilots.

“In that capacity, the Aviation Training Center’s normal day-to-day doesn’t have the primary mission of running SAR,” Briggs explained, but pointed back to Hurricane Katrina where he worked as a mechanic and where the U.S. Coast Guard learned how to brace for a big event. “We learned that we need to do supplement SAR. When a big event like Harvey came up, the decision was made for us to deploy. We would help wherever needed and in this case it was in Houston.”

He volunteered with two others out of Mobile, available to take over whenever the area pilots and air crew met their maximum number of hours allowed in a day.

“If you have a large-scale operation, you’re going to burn through your crew quickly because of those time limits,” Briggs said. “So we were there to step in and keep the response going.”

Lt. John Briggs received the Distinguished Flying Cross for his acts of heroism during Hurricane Harvey in Houston, Texas.

However, the Coast Guard crew on duty in Houston were sent on a SAR call up north just before the storm hit. The crew got caught in bad weather on the way back and couldn’t get home.

“It’s like having a fire truck gone in Coquille but you need it in North Bend,” Briggs described. “Which is how I went over in the first wave towards Houston.”

On the night Hurricane Harvey slammed into Houston, Briggs and his crew went to bed at 10 p.m. By 1 a.m., he was getting a call from the operations officer that several SAR calls were coming in. Some of them were described as “dire.”

The crew Briggs was placed with were people he had never met before, but he credited the Coast Guard’s standardization for how well they worked together.

“Our goal in the Coast Guard is to train everyone in the exact same methodology where you can operate seamlessly without any spool-up period,” Briggs said. “How we worked together was a testament to that.”

As Briggs and the crew walked out to their helicopter on the tarmac of the airport, which was shut down aside from the communication’s tower, he said there was lightning and thunder.

“The wind was kicking up and we were getting huge rolls of rain,” Briggs remembered. “We launched in hurricane-force winds, having never been to Houston before and with no real knowledge of the area.”

Briggs described the flyable moments in the weather as being wind blowing at 70 miles per hour, while “fingers” or “bands” of bad weather could only be seen on radar. The air traffic controller clocked those bands of turbulent weather and reported it to Briggs, counting down to each one by two minutes, one minute, or 30 seconds.

Lt. John Briggs sent The World photos taken during flight missions during Hurricane Harvey. Pictured is some of the devastation.

“That first band hit and it went to 50-feet visibility and was the hardest fight of a helicopter I’ve ever had,” Briggs said. “It took both piloting skills to keep it in the air. We battled that for maybe 10 minutes and learned that we had to get close to objects to keep them in sight, which is really dangerous.”

Once the dangerous weather broke for a few minutes, Briggs could fly again and found their first SAR location. He described seeing waters rising out of the basins below, reaching up to the eaves of houses.

Their rescue swimmer, Tyler Gantt, was on his first SAR mission that morning and was sent down to find a pregnant woman they were called out to rescue. As the woman and a couple children were sent up, another band of bad weather hit.

“The electronics started to fail,” Briggs said. “Things are turning off and the rescue hoist breaks. We can’t recover our rescue swimmer.”

Gantt is told to climb a tree or onto a roof to wait for them to return, something Briggs said rescue swimmers are trained to do. However, swimmers are usually left in the ocean which “is predictable” while “an urban environment has flying debris.”

“We left him,” Briggs said. “I didn’t feel good about that.”

After taking the semi-broken helicopter back and picking up a new one, Briggs and his crew were able to locate Gant who was waiting for them with others who needed safe harbor.

During the second trip out, Briggs recalled Gantt spotting a cellphone light in a house window, grabbing a chainsaw and jumping down to cut a hole into the roof.

“People climbed out just as the house filled up with water from the inside,” Briggs said.

Finally, as the helicopter started to run out of fuel, Briggs saw Gantt take a swan dive off a roof into the flooded street and reappear with a toddler in his arms.

“We have two minutes before the next band of weather comes and the toddler is too small to be wrapped in normal rescue equipment,” Briggs said.

To pull the rescue swimmer and toddler out of the flood waters before the next hit of weather, he lowered the helicopter between powerlines and trees. Gantt “bear-hugged” the toddler as he was lifted back into the helicopter.

“We got them on board and had the crap kicked out of us from the weather, but we made it back to the station,” Briggs said.

It was Day 3 of working Hurricane Harvey, after the inclement weather had passed, when Briggs and the crew went on to make the record of the number of rescued persons hoisted into a helicopter.

Briggs had put the rescue swimmer down and went to refuel. When he returned, Gantt had gathered four older women and 10 babies.

“I don’t know if it was a care facility, I didn’t have time to ask,” he said.

“It takes working together in this perfect harmony as a crew to do what we did,” Briggs said.

A new exhibition of photographs exploring Bandon during the Eisenhower Era, 1955–1961, is now on display at the Bandon Professional Center through Nov. 25, 2020.