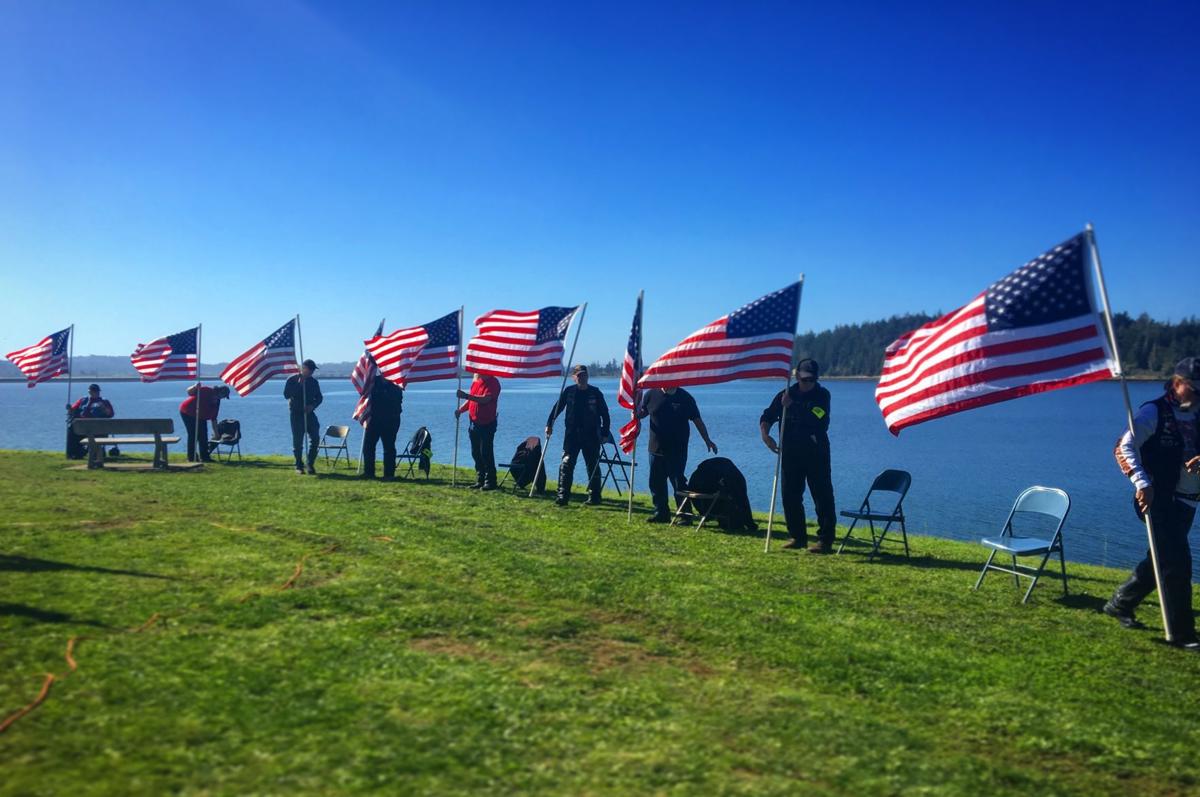 Veterans showed their patriotic pride as dozens came out to view the official unveiling the new Gold Star Memorial Marker at the Dewett Veterans Memorial site. 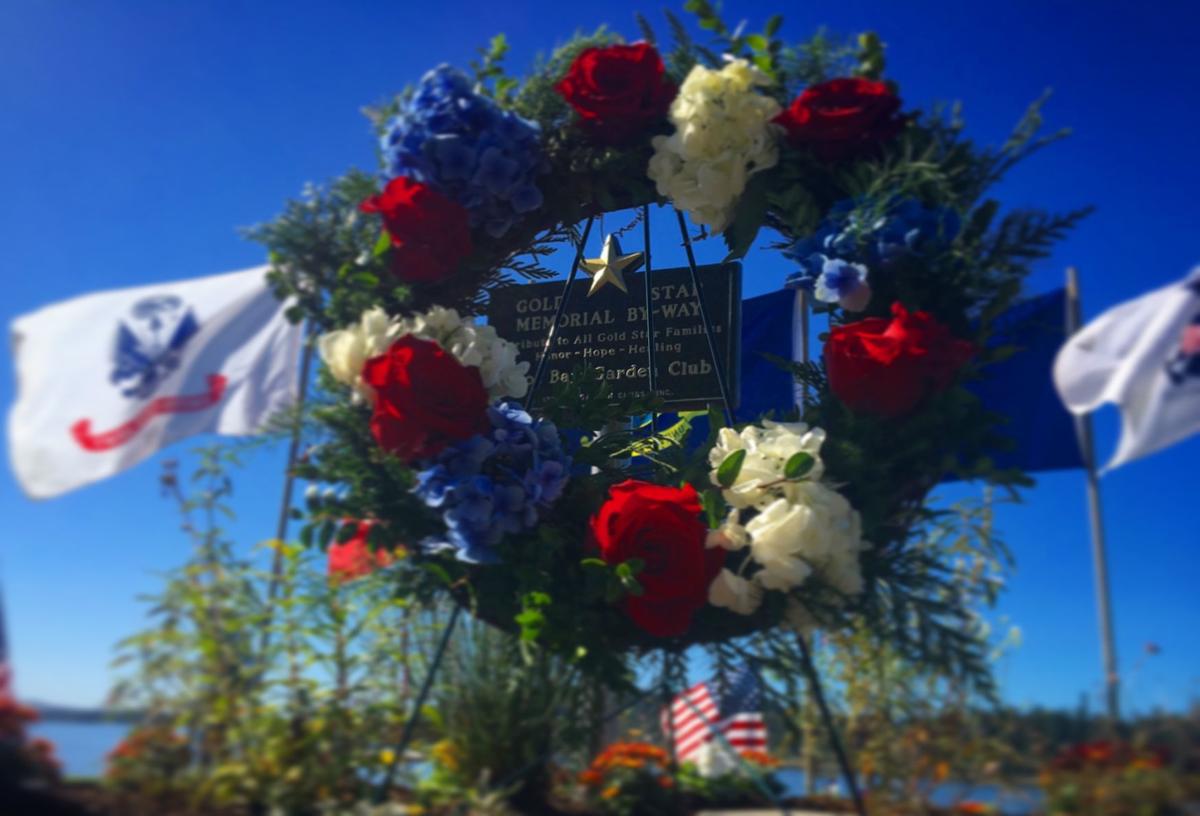 The Gold Star Memorial Marker was unveiled in North Bend last month to honor local families who have lost a loved one in the military. 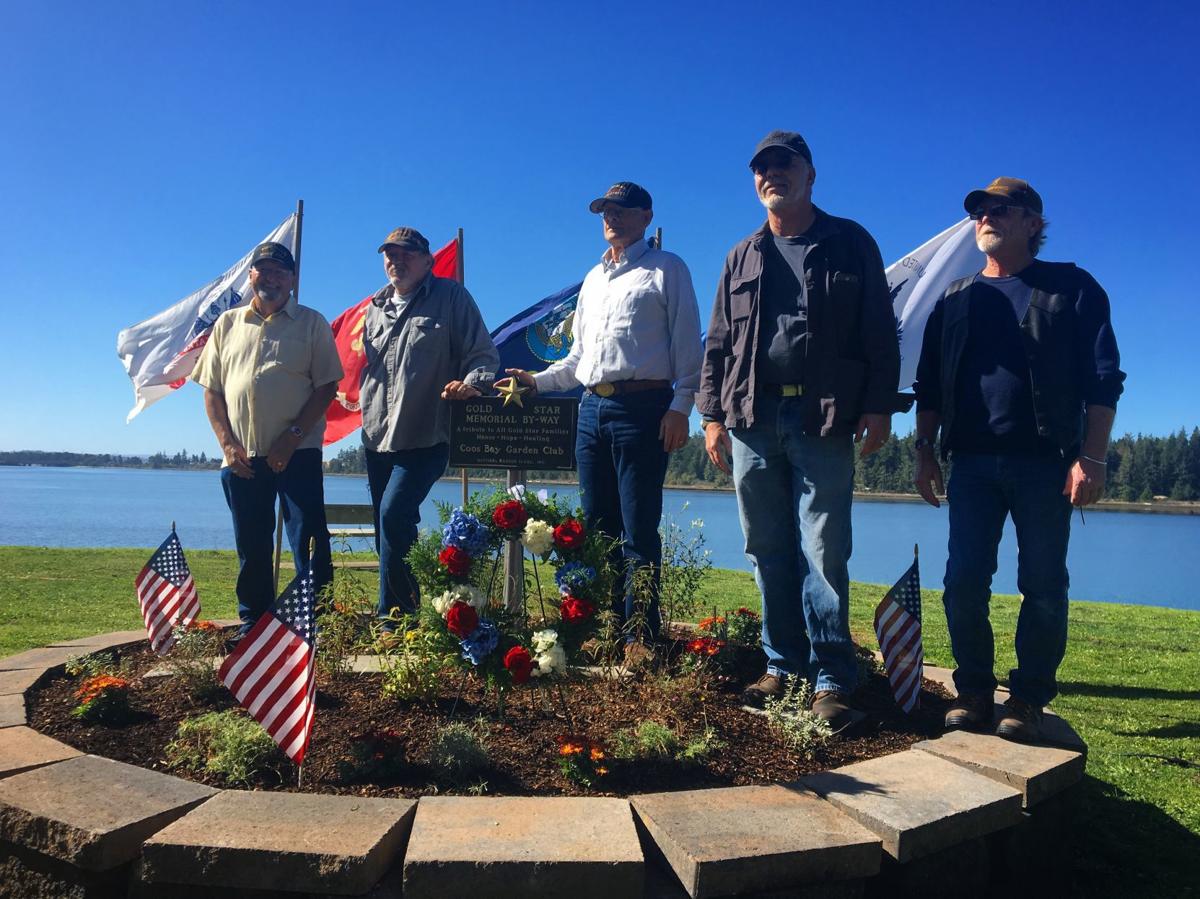 NORTH BEND — About 10 years ago, Mark Winders of Point Man Ministries, a local faith-based veterans support group, made a promise.

The Marine Corp veteran vowed, alongside fellow PMM members, to bring a Gold Star Memorial to the South Coast in the hopes of honoring local families who have lost a loved one serving in the military.

The Gold Star Memorial Marker was unveiled in North Bend last month to honor local families who have lost a loved one in the military.

Dozens of community members, veterans and active duty military personnel gathered at the site over the weekend to watch the official unveiling and take part in its dedication ceremony.

More than a handful of Gold Star families attended the ceremony, including North Bend residents Jim and Ruth Wiley, who came to honor their late son Lt. Col. James “Jim” Wiley Jr., who passed away on duty in Afghanistan in 2008.

“It’s a wonderful gift to see the Gold Star Memorial and behind it all the beautiful things this area has to offer,” said Ruth. “The peacefulness of the bay, the cranes standing in the water kind of watching over us, the city and the (McCullough) bridge which carries people back and forth like it did so many times with my son.”

“I look out and still see all the beautiful things I saw before, but now there’s the Gold Star that says, ‘we did it, we put this up for your boys.’”

The dedication ceremony featured a number of traditional observances, which included the unveiling, a laying of a wreath near the Gold Star marker, a rifle salute as well as the presentation of colors by the Bandon Veterans Honor Guard and an armed forces medley to name a few.

Point Man Ministries was able to purchase the Gold Star Memorial marker through its partnership with the Coos Bay Garden Club. The local organization worked with the National Garden Clubs to bring the memorial marker to North Bend.

Nancy Ebsen, the chair of the Oregon State Federation of Garden Clubs, explained to attendees the history of the National Garden Clubs and its Blue & Gold Star Memorials programs. As part of the programs, which honor all military personnel, memorial markers have been placed throughout the U.S.

Currently, Oregon has a total of 85 Blue & Gold Star Memorial markers, according to Ebsen. The memorial unveiled over the weekend at the Dewett Veterans Memorial site is the second Gold Star marker to ever be installed in the state, she added.

Vietnam and Iraq veteran Ron Van Vlack of Point Man Ministries, said despite numerous challenges and funding setbacks, the group always maintained faith that it would be able to install a Gold Star Memorial as well as a number of other upgrades.

“We had been saving money from doing fundraisers throughout the years and we decided about a year ago that we’re just going to do it,” said Van Vlack. “It’s been 10 years in the making, but now we’re here.”

The ninth annual Veterans' Art and Craft Show kicks off Nov. 9 at the Pony Village Mall, where visitors will get the chance to view and purchase hundreds of handcrafted, one-of-a-kind items.