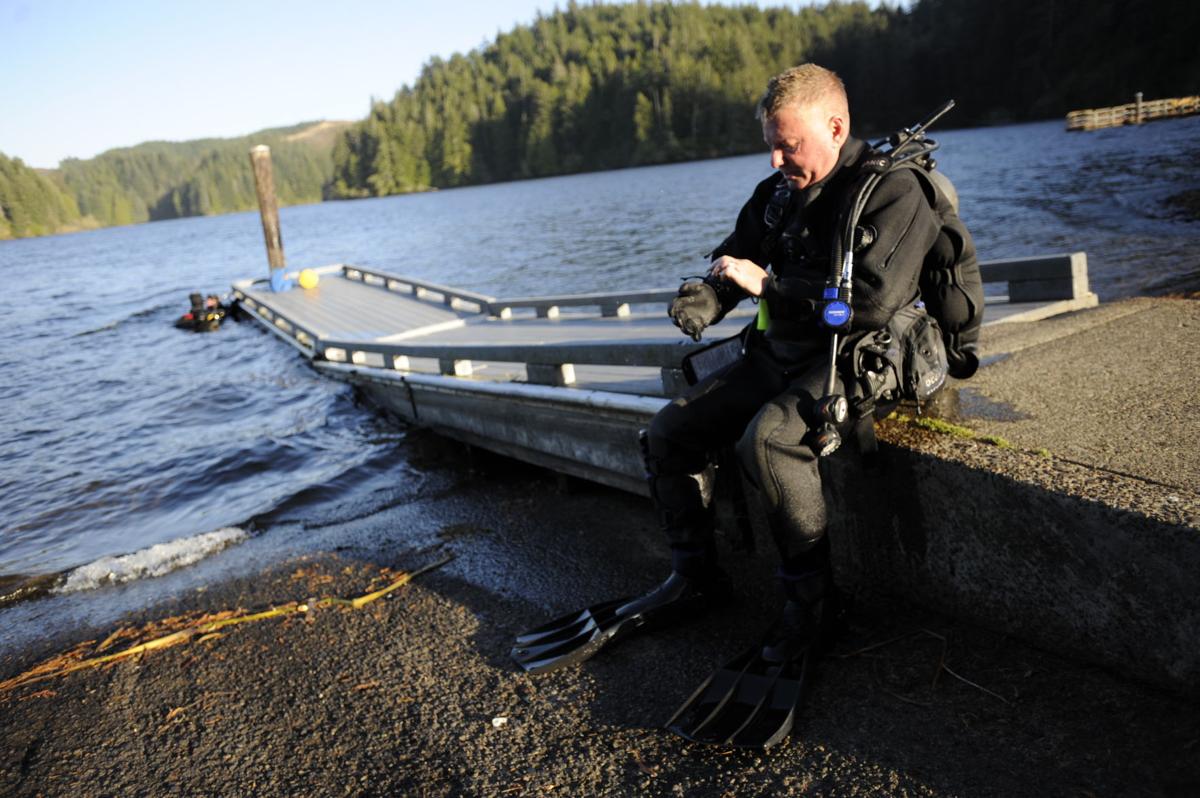 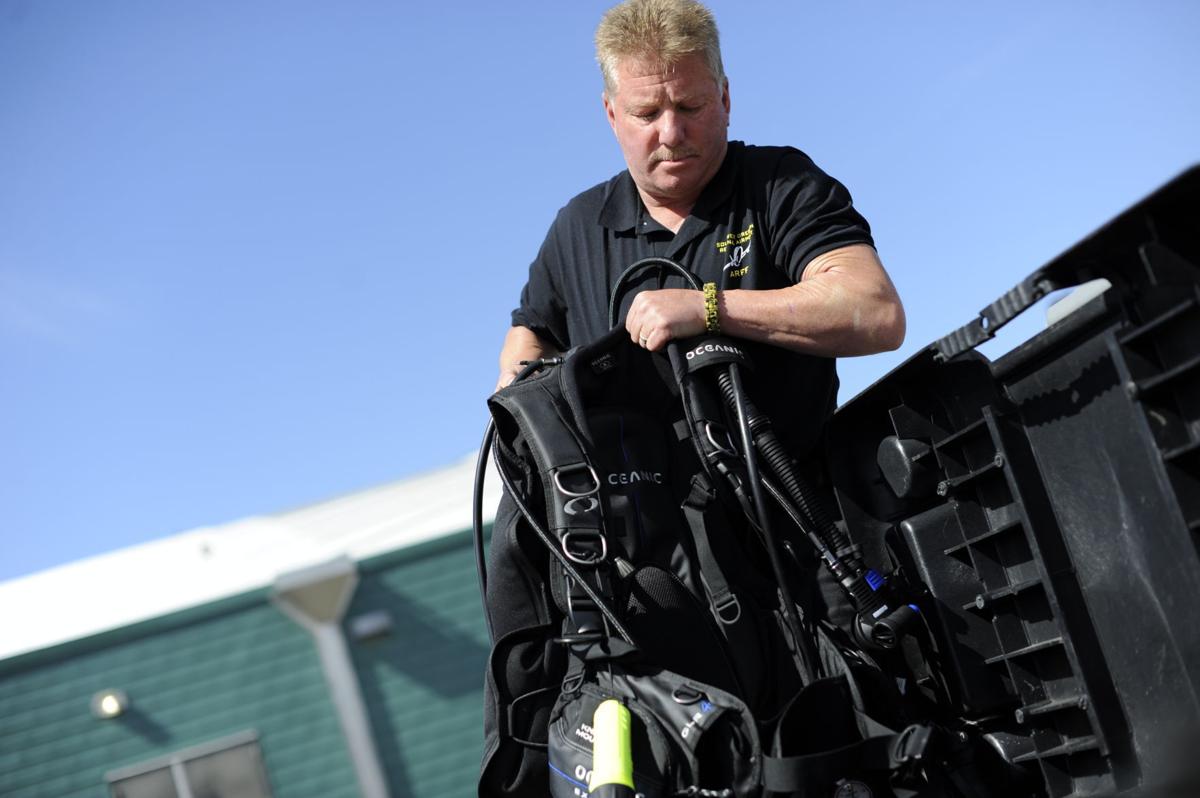 COOS COUNTY — After the Patty AJ capsized in March, and 6-year-old Isaiah Metzger nearly drowned in August, a name kept being repeated: Bob Hood, the rescue and recovery diver from the Bandon Dive Team.

Locals call him a hero, but when Hood got into this job, he never imagined it would become what it has.

"When this dive team was starting out, we didn't know how over-matched we were, that we weren't trained to do what we were doing," Hood said. "Our first case with the airplane really showed us what we were getting into."

It was 1994, and he and a few other divers had formed an unofficial team because they had all done commercial diving in the past and wanted to put their skills to good use. Hood had a friend with the North Bend Police Department at the time and heard there was a need, one that Hood and the others hoped to fill.

They didn't have to wait long before they were called to work.

A small plane crashed at the Southwest Oregon Regional Airport. There were three on board, and the team was called in to recover the bodies.

"It was really traumatic," Hood said. "It was a high speed accident, and so it took a while to get over that. That's not a normal thing that you go through."

But it was the beginning. Hood said that case kickstarted the team into gear and established the airport's water rescue team. Hood and the others were sent to Divers International for training, where they took courses for public safety diving, dive technician one and two, overhead environment and how to handle underwater crime scenes.

It was his wife Veronica's birthday when the mission that nearly killed him came in.

A 14-year-old drowned after being swept into the surf in Florence, and Hood was being asked to be part of the recovery.

He suited up with his team, donning what they called a "shell" suit made of rubber panels. He climbed onto the U.S. Coast Guard boat and headed to the last known area to recover the boy.

The surf was unforgiving, beating down on him and the other divers. As he and the others resurfaced, Hood discovered that his suit had filled with water.

"I had a lot of weight by then and got tired," Hood said. "I managed to grab onto the boat, but then the boat kicked sideways in the surf. I was just hanging onto the side. I was cold, tired, and swallowed a lot of water, but God bless the Coast Guard because they got me back in the boat. But still, that scares you."

The team learned from that mission, and almost immediate replaced the shell suits with dry suits.

"We've never had a big accident where someone really got hurt, but that's from the training," Hood said. "It is not a safe environment, but we are masters at mitigation."

However true that may be, Hood also reminds himself and his team of the saying that hangs over their actions: "Risk a lot to save a lot, and risk a little to save a little."

When Hood was on the recovery mission in Florence, he remembered that. A diver will put more at risk when it comes to the life of a child, and depending on the situation, it can become the most dangerous thing.

He remembered it again in 2014 when he and his team were dispatched to Lakeside for an overturned vessel with three people trapped inside, including a 2-year-old girl.

Hood arrived with another diver, who put his regulator in the hull of the boat and free-flooded it, which bought time. When he surfaced under the boat, he was horrified. There was less than one foot of air remaining.

"The grandmother was standing on the roof hatch and I tried to pull her out, but she wouldn't move," Hood said. "She had good cause not to, because her daughter and granddaughter were in there too."

Knowing that he had to move quickly, he took the 2-year-old first.

"For the mother to let me have the child, the faith for her to give me that little girl, must have been huge," Hood said.

Once he had her, he told her, "Honey, let's hold our breath." On the count of three, she took a big gulp of air and under he went.

"I didn't have much time because I can't teach a 2-year-old how to breathe out of a regulator," Hood said. "The mistake I made though, was I came in a different way then I left. I ran into lines."

Ropes and cords from the boat had tangled in the water, something Hood didn't see earlier from the other side of the vessel when he entered. When he felt the lines wrap around him and begin to tighten, he pushed the child up until she surfaced.

"My safety diver grabbed her, and once she was taken to a waiting boat, he came back and cut me loose," Hood said. "We got rid of the remaining lines and I repeated the process two more times."

When a diver knows there is a person in the water, they weigh the "risk a lot to save a lot" saying. The risk becomes even greater when an overturned vessel is involved. Hood said he saw that in Lakeside, and again earlier this year in March when the Patty AJ started sinking in Coos Bay with Captain Jerry Barkley still inside.

"It was another situation where we got the call from the Coast Guard and showed up not 30 minutes later," Hood said. "We responded quickly and I got into the water, into the cabin, to look for the captain."

The wheelhouse was flooded. With his flashlight Hood said he was able to see all the way around the cabin, but that's when a wave swept over and pulled Hood out towards the net reel behind him.

"That's not something you want to deal with, and I was hanging onto the doorjamb when the door slammed on my hand over and over again," Hood said. "That was unforeseen. I didn't realize I would be pulled out and knew not to go back in."

Hood tried the dive the next day with a member from his team. The Patty AJ had not only sunk by that point, but did so in one of the most dangerous areas of the bay according to the Coast Guard. The underwater currents showed their power during the second dive, when the man with Hood was hit by the boon swing.

"He got hit," Hood said. "It hurt him enough that we had to abort the dive. I could tell by his face, a tough guy, and if he says he's hurt, he was hurt. We have a lot of stuff on, so our gear softened the blow, but we were in recovery mode at that point and had to ask ourselves what are we risking and why are we risking it?"

Hood and his team attempted another dive once more, hoping to bring the sailor home, "but we couldn't do it. Whenever there is a drowning, you feel like you didn't do your job."

"These are all emotional cases," Hood said. "When a human is involved, it will always be emotional."

Over his diving career, he has dealt with 19 drownings, but he has helped rescue 10. The most exceptional case out of those 10 rescues was when 6-year-old Isaiah Metzger became trapped when his family's fishing boat flipped in Winchester Bay, and he remained under the boat for close to 40 minutes.

"We operate in what we call the 'magic hour,' and the classic example of that is Isaiah Metzger," Hood said. "There were other times we tried CPR and it's failed. Things have to happen just right, and we always hit the gas hard because that hour is important. It's hard because your emotion will get away from you, so you have to be careful."

Hood risked a lot to save a lot when he got out to Winchester Bay. He arrived ahead of his team and was informed that the 6-year-old was still in the water. Hood then made the decision to go in without a safety diver watching over him.

"I know the cavalry was on their way, but we were almost out of time with our magic hour on that one," Hood said. "I risked a lot for him."

When Hood got under the boat and saw the tennis shoe in the mess of debris, he had to move fast. He grabbed it, which was still on Metzger's foot, and focused on getting out from under the boat. However, the current was strong and he already knew better than to go a different way.

Not only did Hood get Meztger out, but he shed his dive gear and let it sink to the bottom of the bay in order to perform CPR on the child against the underside of the boat. Once the Coast Guard arrived, he handed the boy off and remained behind in the water.

"There was no time to get me in the boat too, so I told them just go," he said. "I knew my team was on their way for me."

By the time his team showed up, the Coast Guard was already hoisting him out of the water via helicopter.

"They were my mitigation risk that day," Hood said. "I was taking a chance, but knew my guys were coming and they would move heaven and earth to get to me."

Why does he do what he does? Because it has to be done. Hood said the rescues he and his team have accomplished are due to dispatchers getting the calls out to them quickly, and everyone else moving fast.

"I got to score the touchdowns, but there were a lot of blockers," Hood said.

The team has moved from one city to the next in the county, and currently resides in Bandon. Hood and the others often visit classrooms to talk with kids about what they do, letting them know they are there.

"When we're with the little kids, they always want to know if we've been bitten by a shark," Hood said.

I haven't, by the way," he laughed. "Fourth graders on up are interested in the gear. What we tell all of them is that this team will always be around in some form, in this community with the rivers and the bay. Unfortunately too, with as many accidents as we had this year with the vessels, we were able to really perfect our craft. But that's why we're here."