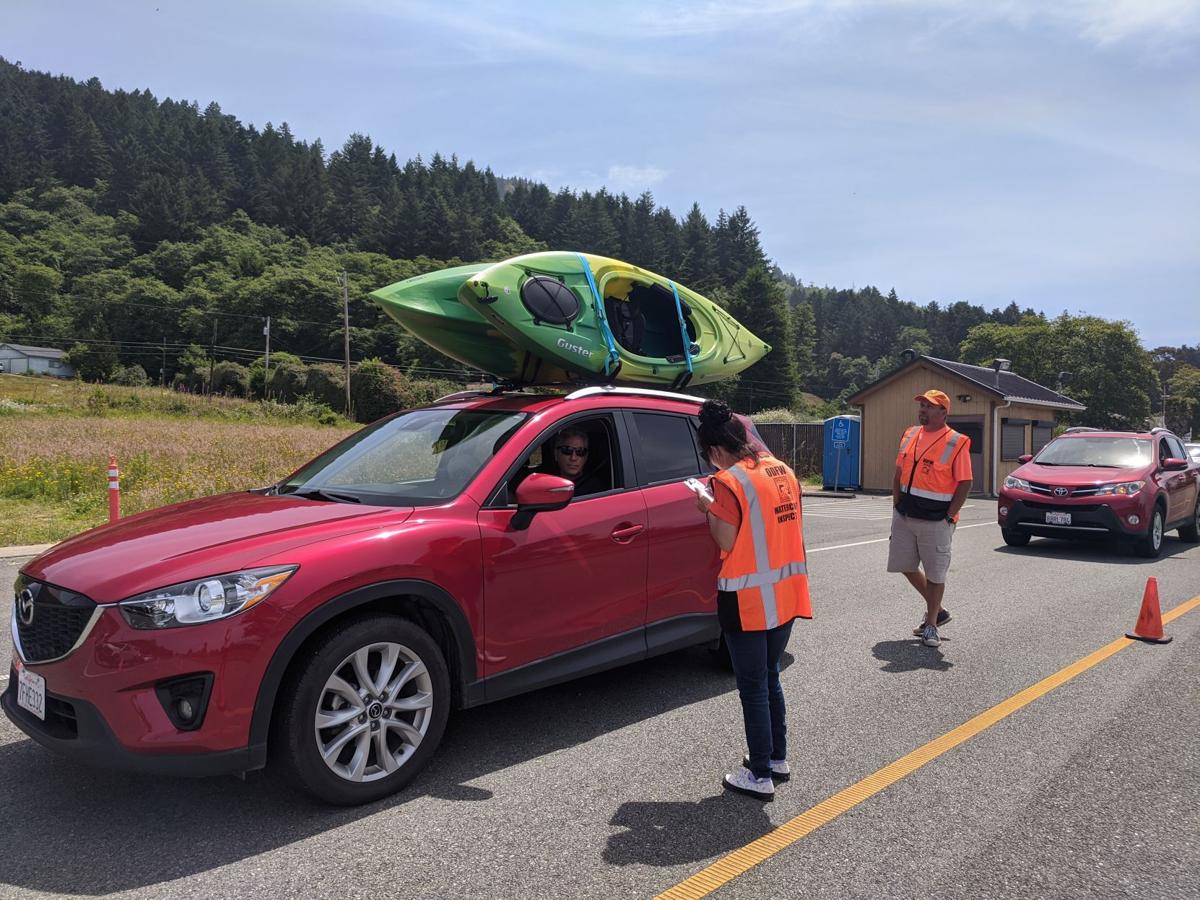 Christen Jamsa, left, and Dave Padgett, inspectors for the Oregon Department of Fish and Wildlife, check the bottom of boats for invasive species at the ODFW boat inspection station in Brookings on June 19. 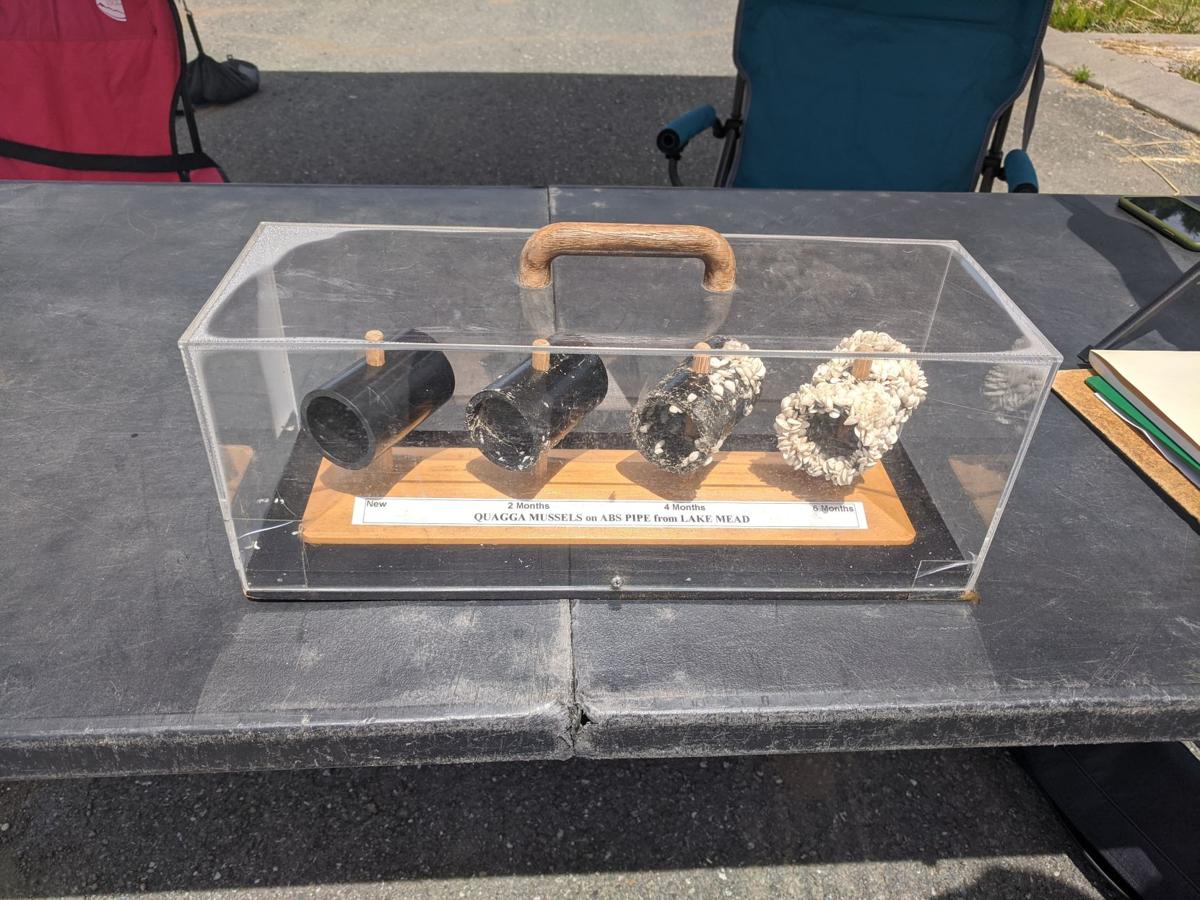 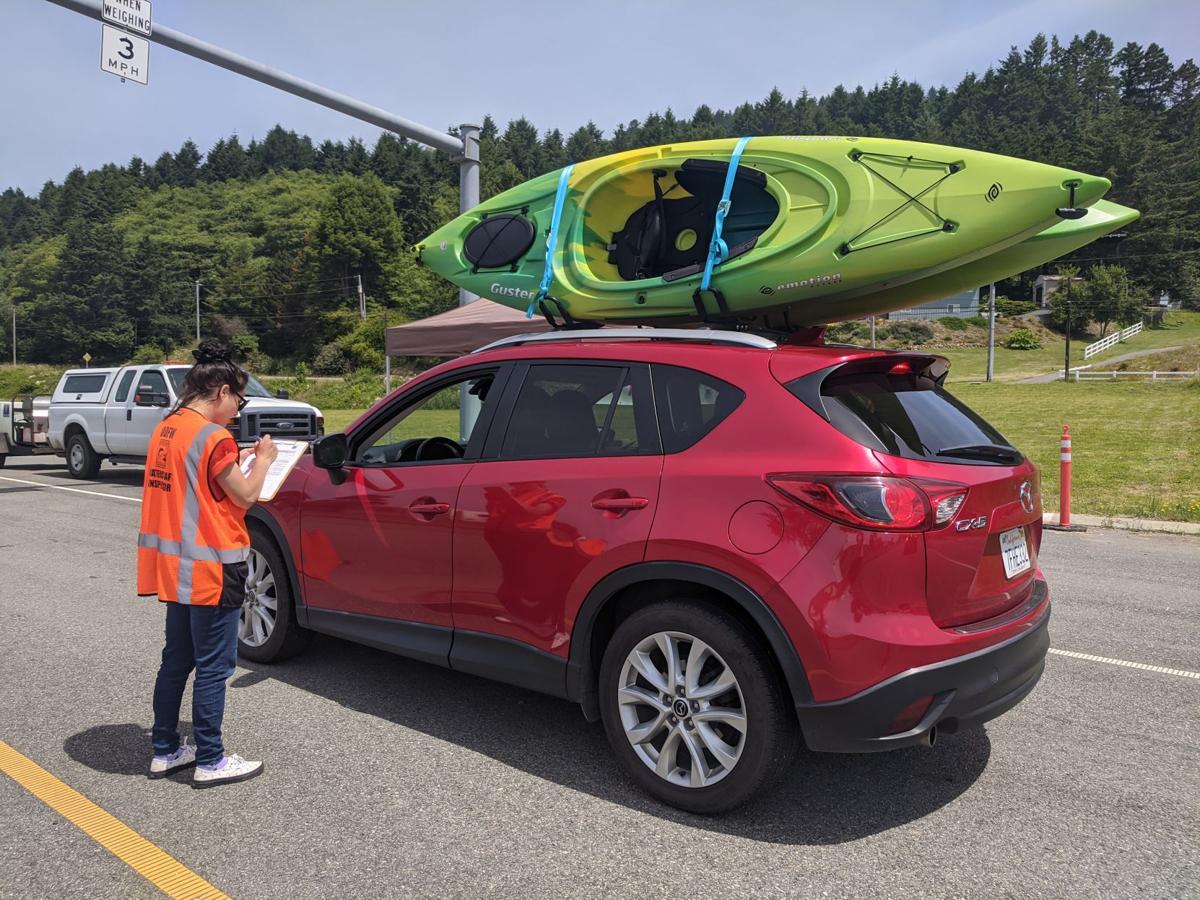 Christen Jamsa, an inspector for the Oregon Department of Fish and Wildlife, checks the bottom of boats for invasive species at the ODFW boat inspection station in Brookings on June 19.

Christen Jamsa, left, and Dave Padgett, inspectors for the Oregon Department of Fish and Wildlife, check the bottom of boats for invasive species at the ODFW boat inspection station in Brookings on June 19.

Christen Jamsa, an inspector for the Oregon Department of Fish and Wildlife, checks the bottom of boats for invasive species at the ODFW boat inspection station in Brookings on June 19.

SOUTH COAST — Whether you’re out on your boat, kayaking or catching a wave on your surfboard, you can expect a cooldown from summer’s approaching heat.

What you might not expect, and in fact not even be able to see, are the little stowaways that might be tagging along with you.

Two of the most notable examples are the quagga and zebra mussels.

Although barely an inch in diameter, these little mussels can not only do a number on boat engines and drainage pipes, but also on the waters they’ve come to inhabit.

Glenn Dolphin, the invasive species specialist for the Oregon Marine Board, is responsible for the agency’s programs throughout Oregon that aim to keep invasive species out of the state’s waters, including zebra and quagga mussels. Here’s what he has to say about both of these species:

Both hail from the Black and Caspian seas, which are actually freshwater bodies. They’re most commonly brought over in the ballast water of boats that’s then expelled into North American waters.

Although the adults grow to about the size of a thumbnail, there are often several hundred thousand growing in one square meter, which can cause major structural damage if left untouched.

These mussels are great at reproducing themselves. They group in large colonies and filter a liter of water a day to feed on, starving other aquatic organisms at that level.

Without the disease and predation present in their native environment, the population of these mussels goes unchecked.

The quagga mussel was first spotted in the western United States at Lake Mead in 2006. Since then, eight western states have implemented boat inspections.

Oregon now practices the “Clean launch Law,” which states that you must have a pristine boat to launch.

The program, which began in 2010, involves the inspection of the hulls of boats to detect invasive species such as quagga and zebra mussels, which attach themselves to any surfaces.

As of Jan. 1, 2020, a new state law requires the removal of any standing water in a boat when you take it out of a body of water. The motto that applies is “Clean, Drain, Dry.”

And this is exactly what boat owners are expected to do when you leave a body of water — drain all of the standing water within the vessel.

This law also applies to kayaks and canoes, in both salt and freshwater bodies.

For a fishing boat, this means draining water through a plug or valve. For kayaks and canoes, it means turning the vessel upside down in order to dump out any water (some kayaks have drain plugs).

The kayak or canoe also should get a thorough wipe down with a sponge or cloths, especially the areas where one’s feet rest, because some invasive species (like the New Zealand mud snails or fragments of invasive plants) - and even what might be considered native plants and animals - can be carried to a new location on the bottoms of boots or sandals.

Although drying out will usually kill most invasives, some zebra mussels have been shown to survive two to three weeks on or in a boat out of water, if the weather is damp and cool.

Even shells and other organic materials are a problem.

Oregon lakes are monitored by taking water samples to look for “environmental DNA” from potential non-native organisms. It’s a very sensitive test that detects very small traces of DNA from an invasive species.

If a false positive occurs because a boater carries even shells, not live animals, into the lake from elsewhere, that will show up in the environment DNA. Additional monitoring may have to be done, involving testing many samples from throughout the lake – at a cost of thousands of dollars.

Rick Boatner of the Oregon Department of Fish and Wildlife supervises the inspectors at the six Oregon inspection stations. These stations are operated with a $5 permit fee when boat owners (including canoes and kayaks) license their boats every two years.

Four of the six stations — Brookings, Klamath Falls, Lakeview and Umatilla — are seasonal (usually April to September). The Ashland (I-5 south) and Ontario (I-84 at the eastern border of Oregon) stations are year-round.

Currently, there have been no sightings of the mussels in Oregon, with the exception of a false positive in upper Klamath Lake back in 2012.

Last year, the Brookings inspection station ran from April 16 to after Labor Day, with 2,907 inspections conducted.

The Brookings station has the highest rate of non-compliance of all of the Oregon inspection stations. About 45% of boats being transported by the station are not inspected because their owners (or haulers) do not stop, even though required to do so by law.

Vehicles hauling kayaks and canoes are among the worst offenders, according to Boatner. Apparently, many of those boaters believe the inspection requirement doesn’t apply to them.

The Oregon Department of Fish and Wildlife hires and trains inspectors to help man these stations and to assist with the examinations.

Generally, these inspectors either have a college bachelor’s degree or an associate degree in a field related to ecology or fish and wildlife management, or they may be college students in the same fields.

According to Boatner, the training consists of a week of study about the laws and procedures, then a week of hands-on training at the inspection station.

The program relies heavily on “Enforcement Through Education” to teach boaters about their important role in prevent the spread of invasive species. The fish and wildlife department and the Oregon Marine Board said the use social media, newspaper articles and word of mouth to alert boaters to the laws.

Writing tickets is usually a last resort, they said.