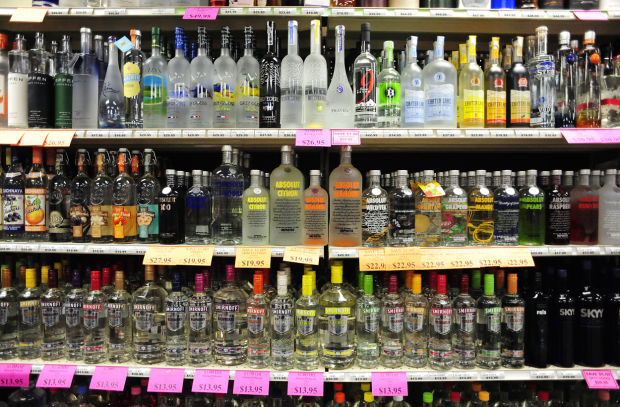 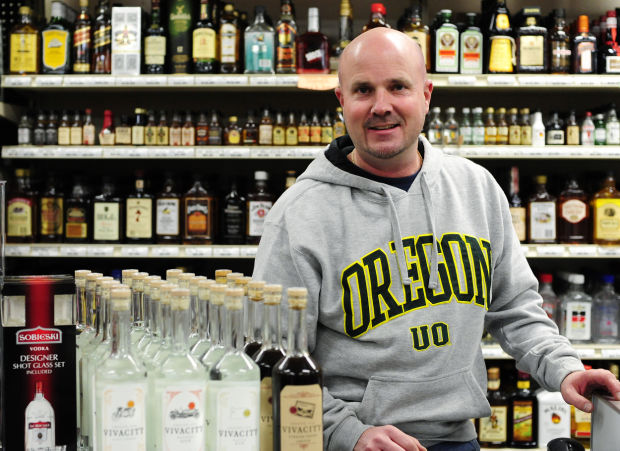 By Alysha Beck, The World Dec. 4, 2013 Scott Farlow, owner of the Coos Bay liquor store, sells around 500 brands of liquor in his store. He said if legislation is passed allowing grocery stores to sell liquor, it will hurt his small business. 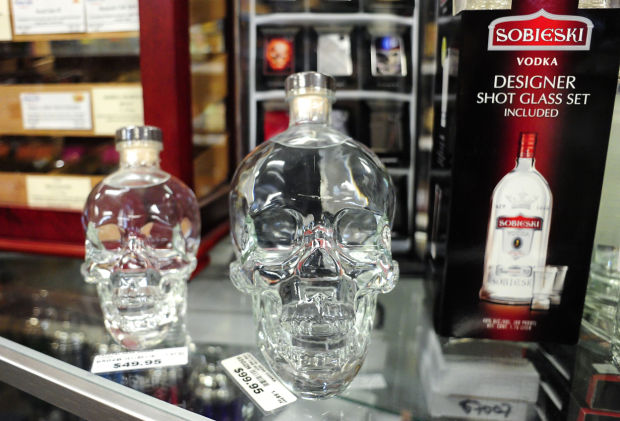 By Alysha Beck, The World Dec. 4, 2013 The Coos Bay liquor store sells a variety of liquor.

By Alysha Beck, The World Dec. 4, 2013 Scott Farlow, owner of the Coos Bay liquor store, sells around 500 brands of liquor in his store. He said if legislation is passed allowing grocery stores to sell liquor, it will hurt his small business.

By Alysha Beck, The World Dec. 4, 2013 The Coos Bay liquor store sells a variety of liquor.

SOUTH COAST — Community liquor stores are wondering how they would survive if customers could check grocery and liquor off their list in one stop.

This summer, the Northwest Grocery Association launched a campaign for a ballot measure to allow grocery stores to sell liquor. The move would negatively impact the small, state-regulated stores where shoppers have purchased their liquor for decades, liquor agents say.

Agents are contracted by the state to sell liquor from the state’s distribution center in Portland. Agents don’t set the prices or sales on the liquor and their sales commission is capped at 8.8 percent.

The proposal gives grocery stores with a footprint of more than 10,000 square feet the ability to sell hard liquor alongside their beer and wine.

“We want to bring convenience to our customers and the current system makes it very inconvenient for folks to have to make that extra stop,” he said. “It stifles competition in the marketplace. Anything that we would do would give them the opportunity to become a regular private business with some sort of buy-out provision.”

That would mean liquor stores would either be bought out and shut down or continue as a private business, he said.

“We would like to see something where they get the chance to stay in business and compete,” he said.

But many aren’t sure if these small liquor stores would be able to compete against large chains like Fred Meyer and Safeway.

Learn a lesson from Washington

“It would be extremely negative, there’s no doubt,” said Scott Farlow, Coos Bay Mixer’s agent. “It would dramatically hurt our business.”

He hopes the OLCC learns from the aftermath of privatizing liquor in Washington last year.

“The big stores (in Washington) were not charging the 17 percent tax that the small ma and pa stores have to,” he said. “It drives out the small businesses. Then they’re out of business and the big stores can do whatever they want. We don’t know whether it will happen or not. I hope in our small community that we’re safe. Most likely it will happen in the metro areas.

“Something’s going to happen. Something will change, we just don’t know what it will be yet or how it will affect individual owners.”

Last month, OLCC commissioners decided to ask the legislature to make a decision one way or the other: either invest more money in the current liquor system or change it.

“It absolutely has to increase,” he said. “They’re always asking us to improve our stores. In most businesses, when sales increase you make more money. In this business, we’re limited to 8.8 percent.”

“I think every agent in the state would say yes, they could use more compensation,” Huffman said. “They want to upgrade and to do that, you have to have income.”

Liquor stores don’t own their inventory. Agents are responsible for the store, lease, labor and expenses but the liquor itself is controlled by the state.

“If there’s one common point in the room, it’s that the current retail outlet model they have, the agent model, will eventually implode on itself,” he said. “The stress it puts on agents is pretty immense in that the agent does not control the price at which they get the inventory, and they don’t control the price at which they can sell the inventory.”

“So they get pinched between rising costs and a ceiling on prices,” he said. “And everyone recognizes that they can’t continue to do that because these guys won’t be able to stay in business. We’ve seen that for years coming but the legislature has refused for over a decade to give them any kind of increase.”

Right now, the Northwest Grocery Association continues to do its homework researching decades of liquor laws so it can pursue an initiative in the upcoming legislative session.

“One thing we discovered about Oregonians is they believe the main function of the OLCC should be licensing and enforcement and that it shouldn’t be in the promotion and marketing of liquor,” he said. “It’s a conflict of interest. They’re trying to increase sales on one side but enforce and be the police on the other. They need to be one or the other.”

They can’t do what we can

He pointed out a regular bottle of Kahlua and bottles of several different Kahlua flavors right next to it. A grocery store wouldn’t be able to have that kind of variety, he said, since “99 percent of people are going to buy the original Kahlua.”

“Our variety is so much better,” he said. “Grocery stores are only going to carry what they can sell.”

And liquor stores have been a boon for Oregon distilleries, who can always find shelf space for their signature product.

Another problem with putting liquor in grocery stores is it’s so much easier to steal. In fiscal year 2013, only $7,680 worth of liquor was stolen across the entire state, according to the OLCC.

“In a grocery store, it’s so much easier to stick a bottle of alcohol down your pants,” Huffman said.

“I don’t think it’s a good idea, just because my personal belief is it’s a theft issue,” he said.

Fred Meyer and Safeway managers declined to comment on the issue.

At Coos Bay Liquor, there are eight high-definition cameras keeping an eye on the entire store.

The Oregon Liquor Control Commission’s gross sales for distilled spirits for the 2011-2013 biennium totaled $974.8 million. That resulted in $119.2 million that was distributed to cities, $35.1 million to counties and $225.6 million to the state’s general fund in the same timeframe. Distributions are based on population.

According to OLCC, 96 percent of its net profits come from hard liquor sales.

Death to the OLCC! Can't wait to vote them out of business. I am thankful that I visit California regularly. I love BevMo! I save enough on my booze to pay the cost of gas to SF and back.
I was recently in PA and you can't even buy beer in the grocery stores there. Had to drive to Maryland to buy some. Now that's messed-up.

Having been involved with liquor laws in various Western states over the past 50 years, I've observed several different directions each state has taken. OR has by far the most monopolized edition of state controlled liquor laws.