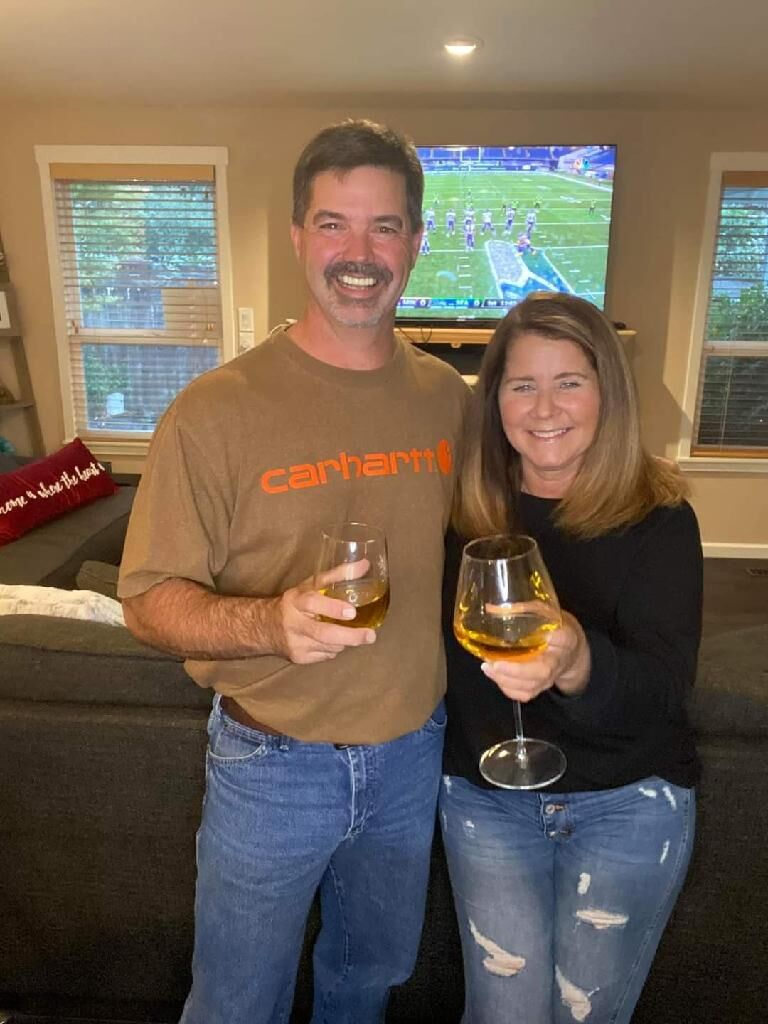 Ray Hacker and Marci McIntyre pose for a photo before Hacker donated a kidney to McIntyre.

Ray Hacker and Marci McIntyre pose for a photo before Hacker donated a kidney to McIntyre.

Ray Hacker considers Marci McIntyre one of the nicest people he’s ever met — a friendship that goes back some 40 years to when they met in fourth grade at North Bay Elementary School.

Marci considers Ray to be an angel.

The first time was on Nov. 5 1991, when her younger brother, Jimmy donated a kidney. Nearly 29 years to the date later, Ray did the same.

“The first one lasted 25 years,” Marci said. “I was in the 3 percentile who last that long.”

She’s hoping to get at least 15 years with Ray’s kidney.

Just getting to the point of the transplant was a blessing … on many levels.

The kidney Marci got from Jimmy failed in 2016.

She wound up in the hospital for 4 ½ months and was having organ failure. She had a heart attack, lost all her hair, saw her weight drop to about 100 pounds, went into a coma several different times, the longest one for three days.

“The last coma, they didn’t think I was going to live,” she said. “They gave me less than a 20 percent chance.

“They said I didn’t have any brain function, but they were obviously wrong,”

Marci considers 2017 the worst year of her life. She couldn’t take care of herself, and said a friend took care of her.

Then she went through dialysis — three times a week for three hours at a time — and started to prepare herself to possibly have a second transplant.

But doctors didn’t consider her well enough to be put on a list to get a donor cadaver kidney — but if she found a live donor a transplant could happen.

She sent out a message on Facebook, but without high hopes.

“I knew that anybody who reached out to me was going to be a longshot,” she said. “A lot of people have good intentions. Once they find out the logistics of it, and the recovery and everything you go through — you have to be committed. You have to be all-in.”

Out of several people who reached out, Ray was the only one who followed through.

His own background makes that decision easier to understand.

“I’ve got a lot of donor participants in my extended family,” Ray said.

His wife’s nice has had kidney and liver transplants. He has an uncle in Oklahoma who had a liver transplant. He had an aunt in Michigan who suffered from lupus and other ailments and donated her body to a university for testing.

It’s one of those things,” he said. “Ever since I’ve had a license I’ve had organ donor checked on my license.

“If you can help somebody’s life out, you are helping them out and doing that for their family. Personally, I don’t see any reason why not unless it puts yourself in physical harm.”

That it was Marci helped make the decision even easier.

Of course, there were a bunch of hoops to get through.

First, Ray’s blood type had to be a match (it was).

He needed the blessings of his own wife (“My family was 100 percent supportive,” he said.).

And he needed to have the time available for the surgery at Oregon Health Sciences University in Portland.

To that end, Ray is grateful he works as a letter carrier in North Bend for the United States Postal Service.

“I was basically the ideal person to be able to do this,” he said. “I have been pretty healthy my whole entire life. I haven’t had to use sick leave. I talked to my postmaster — she was 100 percent behind me doing this.

“I could afford to do it because she would allow me to take my sick leave. I had enough built up so I didn’t have to lose any income or lose any pay. I had plenty of time to recover. I think everything just aligned perfectly.’

As for the actual procedure, it went about as good as possible.

Ray came home to North Bend, and was soon back to carrying mail.

Marci, who lives in Vancouver, had help from her family in her recovery.

Her mom, Kathleen McCarthy, stayed with her for a month. Her brothers, Jimmy, Jake and Rob, also came to help out, driving her to appointments or sitting with her. Her sons, Dustin and Kenny Bell also have helped out.

“I’m doing really great,” she said. “It’s great to not go to dialysis and be on the machine, for sure.”

The group has always been close, Ray and Marci said, and it showed.

“The class of 1989 was especially close,” Thorn said. “I have had the honor and privilege of being president of this crazy class. We’ve had so much fun over the past 43 years and our reunions are a blast — lots of hugging, laughing and shenanigans. Ray and Marci are usually involved in those shenanigans.

“Those two exemplify the close bond we have in such an inspiring and meaningful way. On behalf of the class of 1989, we are so proud, honored and humbled to know and love these two amazing souls.”

Ray and Becky Deen, another classmate, were among the driving forces for an online auction that generated nearly $10,000.

“I ended up getting almost $20 grand to pay medical costs,” Marci said.

And given how expensive medical bills are with a transplant, that, too, was a godsend.

“You have no idea,” she said of the importance of the fundraisers. “It was a huge blessing.”

In 2020, a year that proved difficult for just about everybody, the transplant story has been a heartwarming tale to tell.

“We have a lot of friends who have said this is the one good thing that has happened all year,” Ray said.