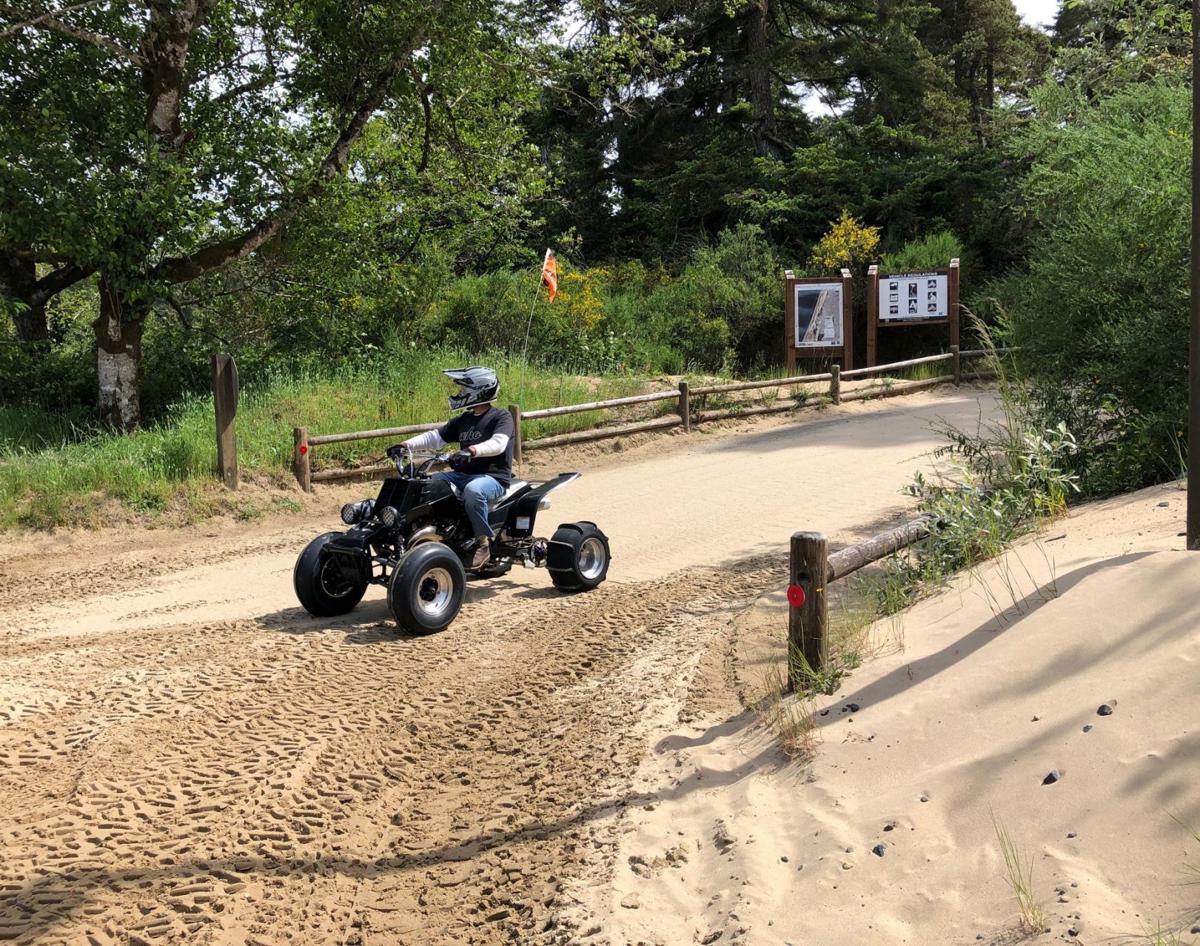 A rider enjoys the trails at Spinreel Campground on a recent Sunday afternoon. 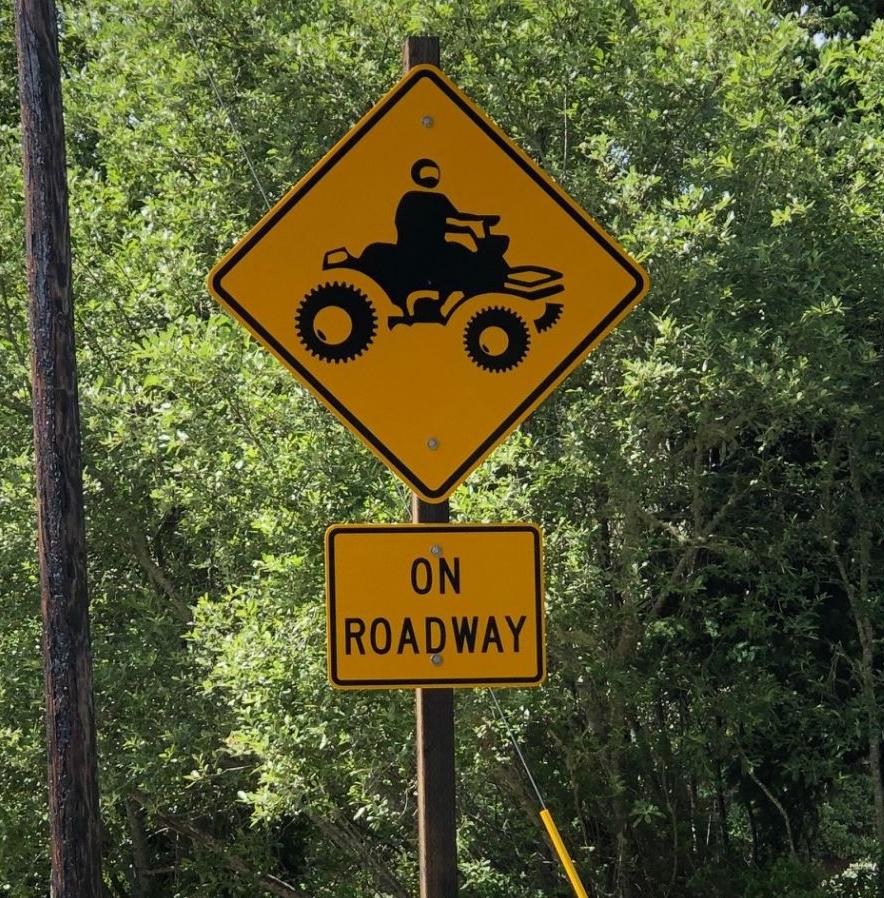 The Lakeside ATV route was approved by the Lakeside City Council on June 23. Now the Oregon Parks and Recreation Department must take public input on the proposed change and make a decision. 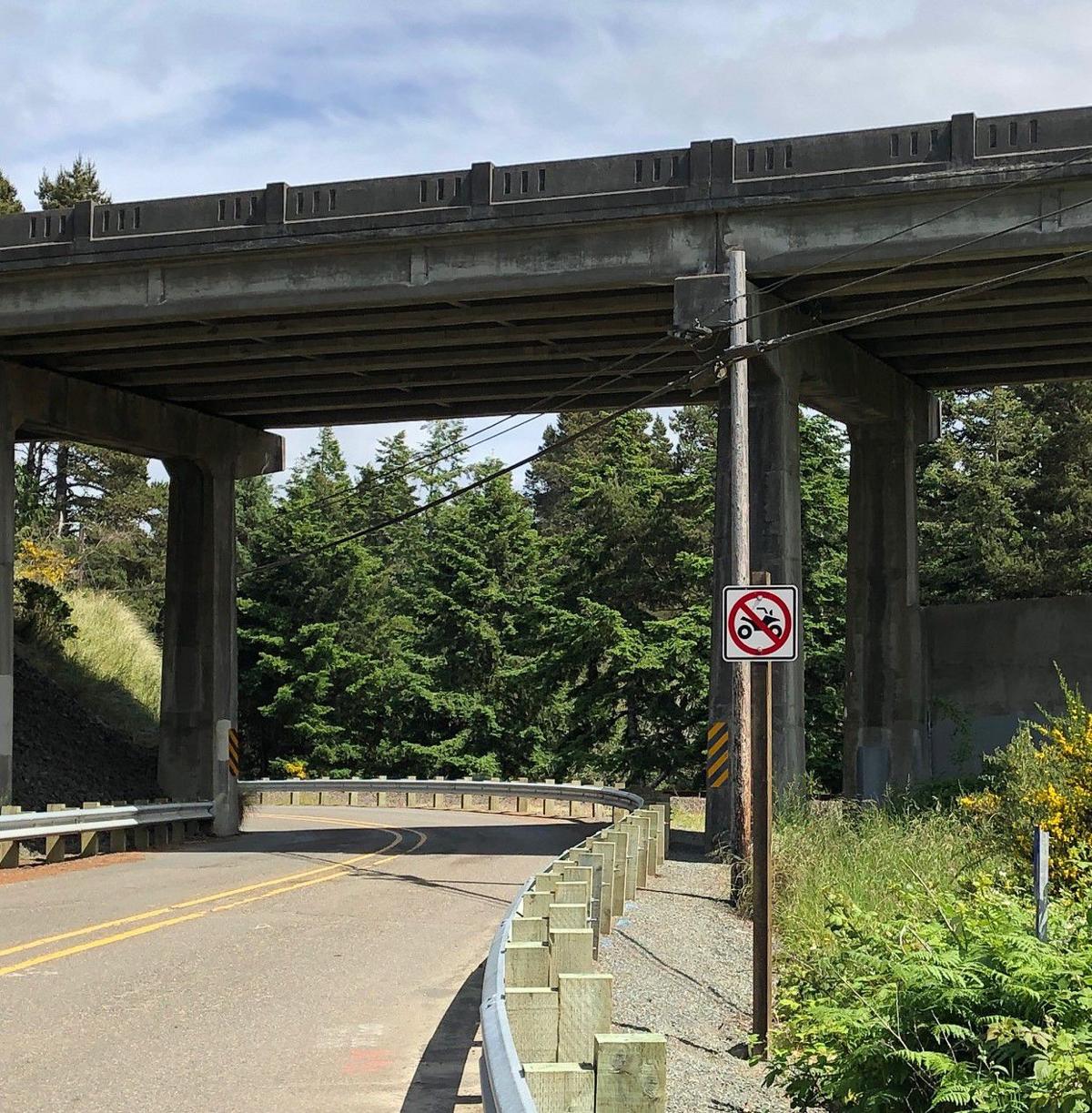 ATV riders currently cannot drive on the road past this underpass of U.S. Highway 101 near Spinreel Campground. A proposed ordinance in Lakeside would allow them to drive into town on a specific route. 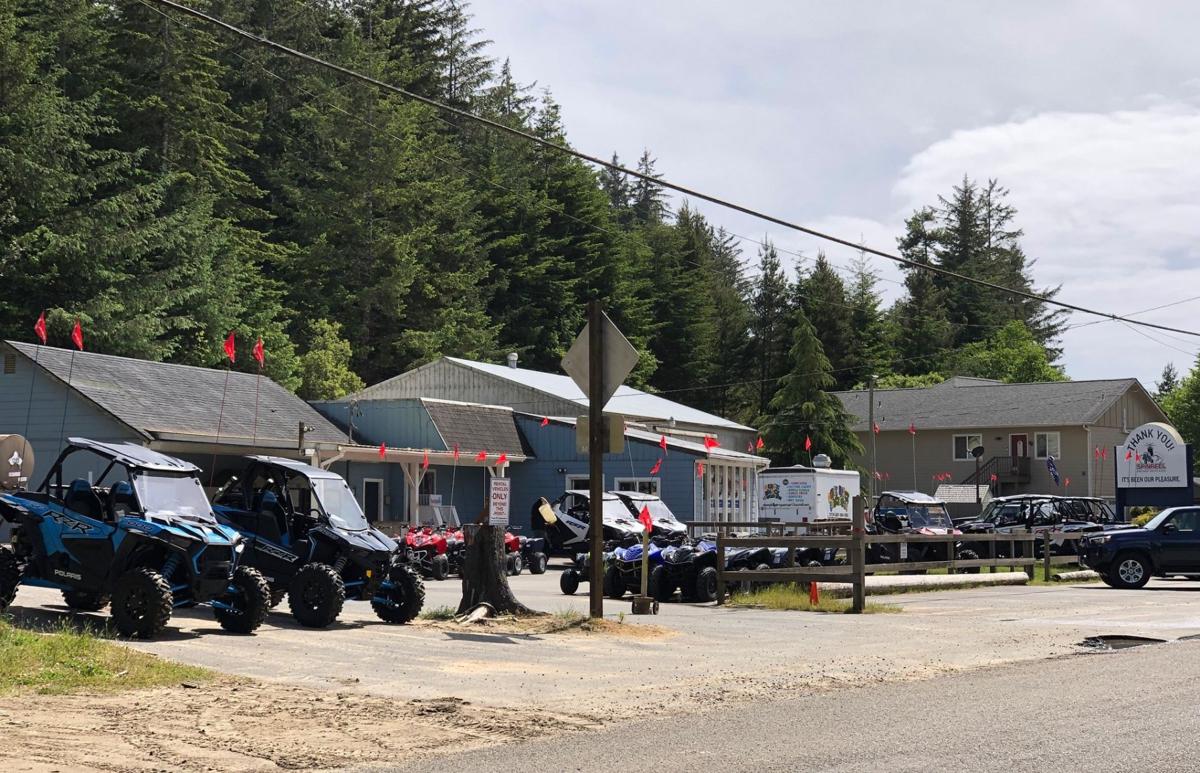 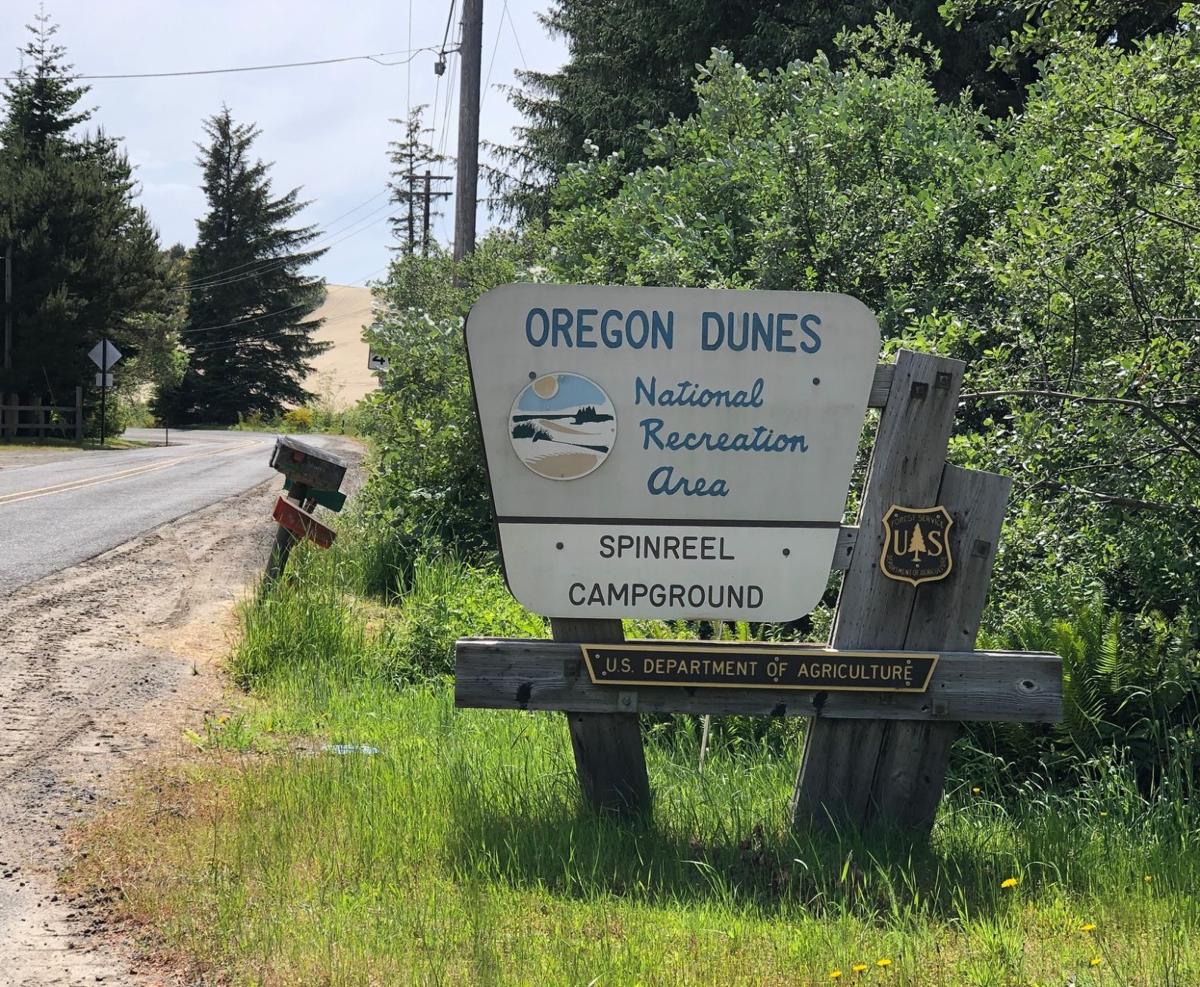 Spinreel Campground in Lakeside, with the Oregon Dunes pictured in the background.

A rider enjoys the trails at Spinreel Campground on a recent Sunday afternoon.

The Lakeside ATV route was approved by the Lakeside City Council on June 23. Now the Oregon Parks and Recreation Department must take public input on the proposed change and make a decision.

ATV riders currently cannot drive on the road past this underpass of U.S. Highway 101 near Spinreel Campground. A proposed ordinance in Lakeside would allow them to drive into town on a specific route.

Spinreel Campground in Lakeside, with the Oregon Dunes pictured in the background.

LAKESIDE — The Lakeside City Council will hold another special meeting at 7 p.m. Tuesday, June 23, at Lakeside City Hall to further discuss a proposed draft ordinance that would allow ATVs to travel on a trail inside city limits that connects to Spinreel Campground, where ATVs are already allowed.

The first part of the meeting will be a public hearing to adopt the city's 2020-21 fiscal year budget.

ATV Ordinance 20-293, the "Lakeside Spinreel Dunes Access Route" if approved, would authorize the operation of all-terrain vehicles to utilize a route to Spinreel Dunes.

A council work session on the proposed ordinance was held on June 10 and the topic was also discussed at the June 11 regular City Council meeting and again at a special meeting June 18 to flesh out the details.

The issue has been ongoing and controversial among residents for some time.

The city recently conducted a survey sent out to residents on the topic.

Proponents say allowing ATV riders, both residents and visitors, to drive to and from Spinreel Campground would boost the economy — especially needed this year as the COVID-19 pandemic forced many businesses to shutter for three months.

Opponents say ATV riders, especially those from out of the area, do not obey speed limits or noise regulations and have in the past exhibited rude and dismissive behavior toward residents. Some fear for their safety as they walk the quiet streets of the small community. Others have concerns about how and if local law enforcement have the officers available to regulate the riders and enforce the rules.

Those in favor of allowing ATVs in city limits have said they wish to put the issue on the ballot for voters to decide in the November General Election.

Mayor James Edwards has helped worked out a compromise for now, and has worked out the proposed ordinance that would allow ATV riders only on the trail rather than on the streets of Lakeside. Edwards has also put forward the idea of a proposed ballot measure to let the voters decide on the larger issue of allowing ATVs on all city streets.

"Most of the businesses in the city of Lakeside rely on the tourist trade to survive," Edwards said on the city's website and in an interview with The World. "So, any economic development, and now economic recovery for us, revolves around bringing tourists into our area. For that reason, and that reason alone, the City Council will be discussing a draft ordinance we titled, Lakeside Spinreel Dunes Access Route."

Edwards said the object is to allow dune riders to camp at the county campground and at Osprey Point, both within Lakeside city limits, and ride directly down East Park, up Eighth Street to Airport Way and out to Spinreel Campground and ATV staging area. Under the ordinance, if approved by the council, those will be the only streets open to ATVs. The route will also allow the people camping at Spinreel to ride their machines into Lakeside to patronize businesses.

If problems arise due to the ordnance, the council can repeal it immediately, Edwards said. As for opening the streets citywide to ATVs, that can be decided by the citizens on the November ballot, Edwards added.

At this time, city ordinance gives people the right to ride ATVs on their own private property, or another private property with written permission. It is illegal to ride on any city streets or right of way, subject to fine of $200 if violated. (Chapter 70, Section 70.03, City Code.)

"I spoke to eight of the cities that allow ATVs on their streets in Oregon," Edwards said. "The smallest city in population is Sumpter with 202, the largest is Sweet Home, with 9,816. The city of Lakeview has 2,313, and John Day has 1,665. All of these cities adopted ordinances to allow ATVs on their streets, for the convenience of their citizens. All have law enforcement of some sort, none have any major issues related to the use of ATVs, and most have not seen any economic impact.

"We differ from these cities with our proposed ordinance, because we are looking at the economic impact on our city and our businesses by becoming the only city on the coast with direct dunes access."

Local residents will only be able to use the proposed Lakeside Spinreel Dunes Access Route, but only from the county park access point or possibly from a staging point at the Lakeside Airport parking lot.

"I want to stress, this proposed ordinance is in its early stages," Edwards said. "We will follow the process outlined in our city charter. If the council chooses to pass the ordinance, we will hold a workshop with the county commissioners, and the Oregon Parks and Recreation Department will have a public hearing on the Spinreel road portion, because it is a secondary state highway."

As for the survey numbers, 679 surveys were sent out and 304 were returned, Edwards added, with 160 in support and 144 opposed.

"We failed to ask if you are a Lakeside resident, so we don’t know if only residents of our city replied, but the results indicate it should be a decision of the residents if they want all streets to be open to ATVs," Edwards said.

At the June 11 council meeting, several residents spoke during public comment on the issue.

UTVs will create economic growth and opens up a lot of opportunities, said Curtis Greer, who is a founding member of UTVTakeover.com and grew up in Lakeside and still owns property in the area.

A North Bend resident said his son and daughter-in-law live in Lakeside and he feels sand duners get a "bad rap."

"We don't leave people out in the sand, we take care of each other," the resident said, adding that it would encourage ATV riders to utilize the county campground rather than only staying at Spinreel.

Elaine Armstrong said she felt the proposed ordinance still needs work as many questions have yet to be addressed.

"Why have an emergency clause (to have the proposed ordinance go into effect immediately)?" Armstrong asked. "This takes away the rights of citizens to vote on it. And I'm concerned about enforcement. Who's going to enforce this ... and what about weekends and evenings? These need to be addressed before passing it. I think we should have a plan in place prior to passing this and remove the emergency clause."

"We listened to 10 of them (per City Council citizen comment rules) and took some of their comments under advisement," Edwards said Monday morning. "Interim City Manager Loree Pryce revised the ordinance this morning."

Edwards said he's not sure whether the resolution will be adopted or not, but that a vote will be taken Tuesday night.

"I can't gauge how the other councilors are feeling," he said. "But we've been dealing with this for a very long time."

The council meeting Tuesday night is open to the public, but the number of people who can attend in person is limited due to COVID-19 restrictions. The meeting will be available to view via public access television and Zoom Conference Call, which works from any telephone. This service is voice only, with no video. The call-in number is 408-638-0968 or 646-558-8656. The moderator will turn your line on. Meeting ID: 872-293-8780; Numeric Password: 260933. Push *6 to mute or un-mute. Push *9 to “raise hand to talk.”