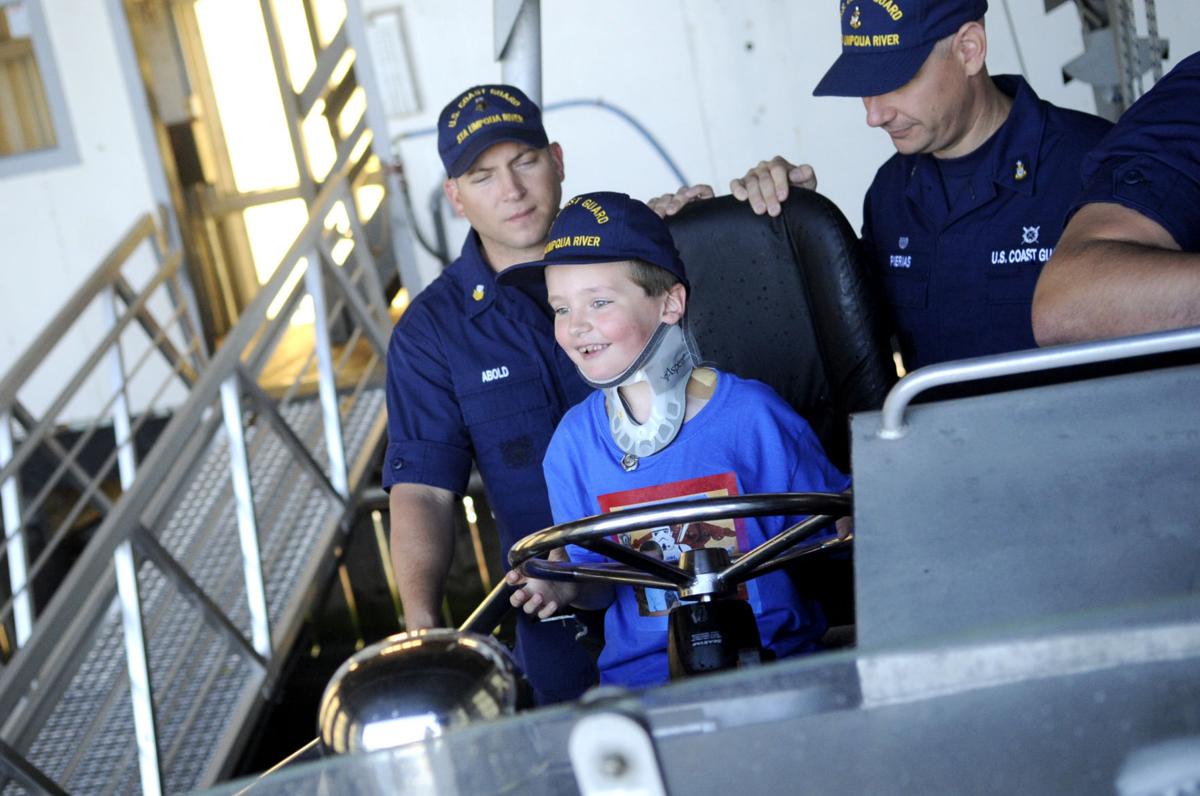 Isaiah Metzger, 6, with BM-1 Shane Abold, left, and Coast Guard Senior Chief David Pieras, right, tries his hand at steering the U.S. Coast Guard's 47-foot motor lifeboat at Station Umpqua River on Friday morning. Metzger and his family visited the station to thank rescuers for their efforts in saving his life after a boating accident on August 25. 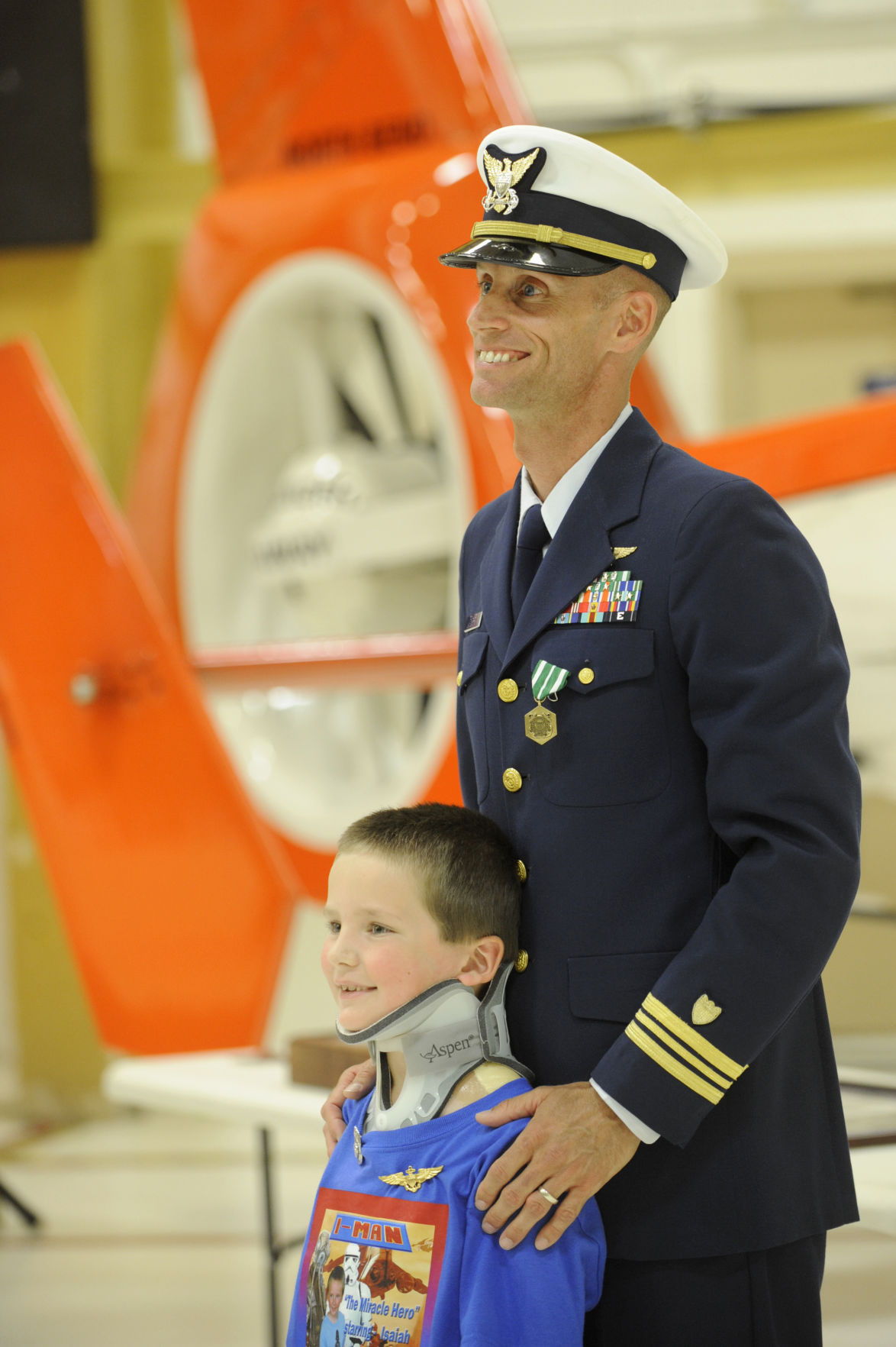 Isaiah Metzger, 6, with BM-1 Shane Abold, left, and Coast Guard Senior Chief David Pieras, right, tries his hand at steering the U.S. Coast Guard's 47-foot motor lifeboat at Station Umpqua River on Friday morning. Metzger and his family visited the station to thank rescuers for their efforts in saving his life after a boating accident on August 25.

Isaiah Metzger is not only out of the hospital and back to school, but paid a visit this morning at Station Umpqua River in Winchester Bay to say thanks to the first responders who saved his life.

Isaiah remained under the boat for 40 minutes before diver Bob Hood could get him out.

Metzger underwent an hour and a half of CPR, and was treated at Lower Umpqua Hospital before being transported to Doernbecher Children's Hospital in Portland. According to his mother, Karla Metzger in a previous interview, he was pronounced dead. Not 30 seconds later, a nurse said he was "looking good."

"There is nothing like this. It's perfect," said diver Bob Hood as Metzger and his family walked through the Coast Guard's boat house, followed by a crowd of Coast Guardsmen on Friday. "All too often this can end with . . . not this result, so I'll take it all day long. This is the highlight of my career."

Hood and the other rescuers, including the Coast Guard, weren't sure where Metzger was taken after they pulled him from the water or if he even survived. Hood started to get calls that Metzger was still being worked on, and about two days later heard he might even make it.

"In the middle of the night, I would check my email," Hood said. "I followed this all day, from start to finish."

As for being recognized as the man who pulled Metzger out from under the boat and starting CPR, he said it was "fantastic I was there, but any of the Coast Guard personnel or dive team members would have moved heaven and earth to get to him."

However, what Hood did was nothing short of courageous. Emergency Manager Wayne Stinson with the Douglas County Sheriff's Office said he has never seen anything like Metzger's survival, or Hood's actions.

Stinson heard the call after the boat turned over, and as an experienced rescue diver for 30 years, he knew what happened next was nothing short of a miracle.

"Boy. . . the normal protocol is to wait for a backup rescue diver to stand by in case it goes sideways, but Hood went in without hesitation," Stinson said. "Even though diving seems pretty straight forward, that environment is dangerous. That boat was up against the rocks, and overhead entrapment is risky. He risked his life to do that, beyond a shadow of a doubt."

Not only that, but Stinson said diver's no longer call it a "rescue dive" once someone has been in the water for even a short period of time. Now it is just "recovery."

"We've responded fast, pulled adults and kids from the water, tried to revive them, and never once can I think of a time where someone lived," he said. "Bob Hood is a hero in every aspect of the word."

When Hood brought Metzger out of the 54 degree water, he initiated CPR with Metzger on the underside of the upturned boat. To do this, he unbuckled all of his gear and let it sink to the bottom of the bay.

"Somewhere between $800 to $1,000 of gear is down there," Stinson said. "In a situation like that, the gear isn't worth anything compared to a life. To go back and find it though . . . very unlikely."

Stinson explained that once a diver surfaces, the gear becomes heavy and cumbersome. Hanging onto a 6-year-old, struggling to stay up, and needing to begin CPR makes the choice clear.

"In still in awe of this guy," Stinson said.

Hood handed Metzger to the Coast Guard and told them to go, leaving him behind in the water. The sad part to the story, according to Stinson, is that two private fishing boats passed Hood as he floated in the bay "and neither of them stopped to ask if he was okay or what he was doing out in the bay."

"They saw him in the water, but we would think that citizens would consider a person in the water a little more important than fishing," Stinson said. "We couldn't believe it."

When he heard that Metzger had been to school on Wednesday, he was dumbfounded.

"That's why so many of us were there this morning," he said. "We had to see it to believe it."

And as Hood watched Metzger pose for pictures with the Coast Guard, he said, "This is just pretty cool."

"He still had issues when he left that we have to watch for, but we could have left a little earlier if not for the holiday on Monday," Karla Metzger said. "It feels amazing. . . He is just about back to his normal self. He has the neck brace and a couple little things we've noticed, but he is pretty much 100 percent."

Lt. j. g. Chad Perdue reported that the Coast Guard is "ecstatic" about Metzger's visit because outcomes like this don't typically happen.

"But the inter-agency coordination was exceptional that day," he said. "Us practicing together and debriefing what happened on this case is crucial for future cases to get the response we had for a similar outcome."

But for Isaiah, who grinned and hid his face behind his hat as family started taking his picture, seeing the people who helped save his life was . . . weird. He explained that he doesn't recognize them, that they are all new to him.

"He gets better every day," Joshua Metzger said. "It took a while, but he seemed to recover just fine."