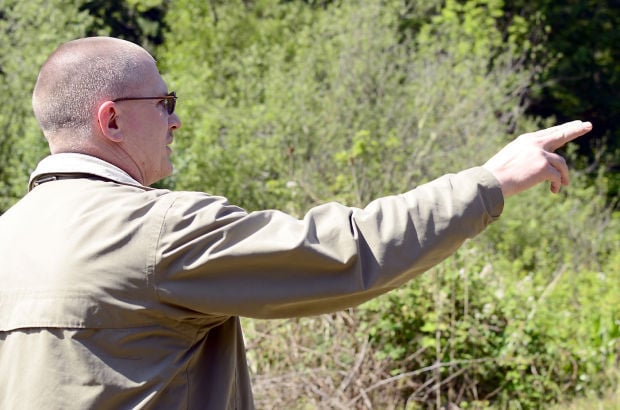 Detective Staff Sgt. Dan Looney of the Coos County Sheriff's Office explains theories of Jeremy Bright's 1986 disappearance on Friday morning at a pond off Rock Creek Road, southeast of Myrtle Point. Looney identified the pond as a popular party spot for teenagers around the time of Bright's disappearance.

Things are quiet at the Coos County Fairgrounds Thursday morning. Things were much different 30 years ago when Jeremy Bright attended the fair. There were more buildings and events had thousands of visitors roaming the grounds. Bright has not been seen since. 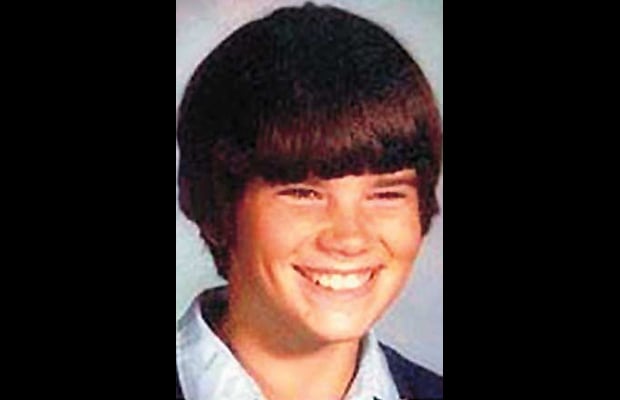 Detective Staff Sgt. Dan Looney of the Coos County Sheriff's Office explains theories of Jeremy Bright's 1986 disappearance on Friday morning at a pond off Rock Creek Road, southeast of Myrtle Point. Looney identified the pond as a popular party spot for teenagers around the time of Bright's disappearance.

Things are quiet at the Coos County Fairgrounds Thursday morning. Things were much different 30 years ago when Jeremy Bright attended the fair. There were more buildings and events had thousands of visitors roaming the grounds. Bright has not been seen since.

MYRTLE POINT — It was “kids day” at the 75th Coos County Fair and Rodeo, Aug. 14, 1986. The morning clouds were burning off to make way for a beautiful summer day in Myrtle Point.

Johnny Limbo and the Lugnuts were going to be playing a couple sets on the midway, and Jeremy Bright, 14, was taking his 10-year-old sister S’te (pronounced ess-tee) once again.

The siblings, along with their mother, Diane Beatty, had moved to Grants Pass the year before, but still had family and friends in the area. Jeremy and S’te were allowed to come back in the summer, staying with family so they wouldn’t have to miss out on their annual fun at the fairgrounds.

Sadly, a day that started out with so much promise, soon turned into a tragic mystery that would span nearly three decades.

After leaving his sister near the Ferris wheel, Jeremy went off on his own. Leaving behind a promise to meet up with S’te again at 5 p.m.

That was the last she ever saw of her big brother.

It was a different time in the world. Kids that didn’t come home right away did not raise the same level of concern then that it would today.

When S’te found a Myrtle Point police officer, after her brother failed to show up, she was told not to worry.  Afterall, “he was probably just off with friends” was the thinking at the time.

Not much more was done the next day either, after the family contacted police again to say he had still not returned from the fair.

In fact, nothing about the missing teen even appeared in the newspaper until five days later, on Aug. 19. A short news brief on page 2 that probably did not attract much attention from the public.

Before the Coos County Major Crimes Team came along, these kinds of cases were just handled differently in its jurisdictions. It was days before the Sheriff’s Office investigators were even called in to assist in the search.

Looking back, they say much has changed since those older days where missing children were often assumed to be runaways.

These days, Zanni said, society is all too aware of the number of child predators in its ranks.

Now, all missing children cases get equal, and urgent, attention from the start.

“We’ll assume it’s something and generally find out it’s nothing, and we’re good with that,” he said.

How different would the response be to a similar situation today?

It starts with that new team.

The Major Crimes Team, headed by District Attorney Paul Frasier, draws detectives from the Sheriff’s Office, Oregon State Police and local police departments throughout the county; the response is immediate.

“We work the same way, we handle evidence mostly the same way,” Looney said. “The advantage we’ve always had is that we work really well together.”

Another aid to the cause these days is the Amber Alert program. Since the 1990s, the federal government has sponsored the implementation of the child abduction notification system nationwide.

Once activated by state law enforcement, the Amber Alert network sends out a message blast of suspect and vehicle information to email addresses, fax lines and cell phones throughout the region.

Would an Amber Alert have helped in the Bright case?

“It would have made a huge difference,” Zanni said. “If nothing else, it makes people remember where they’re at.”

The sheriff said he remembers exactly where he was the day John F. Kennedy was shot.

“Amber Alerts have a similar effect,” he said.

The smallest recollections can have a huge impact when it comes to closing a case.

When the Sheriff’s Office joined the investigation, the belief that Jeremy may have been a runaway quickly started to fade away.

Looney said that in actual runaway cases, there’s generally an indication that a child had thought about or planned to runaway.

In Jeremy’s case, there were no such signs. His family described him as an all-American type who had become an excellent basketball player and was looking forward to returning to school.

The fair had come and gone, and now investigators were having to look back at what happened after he left the Ferris wheel.

Confusion and silence created a tough slog that got more difficult with each passing year.

To this day, the facts they have are few. The theories are still many.

What they do know is that Jeremy had sprouted to become a lanky teen, 6 feet tall and 140 pounds. With bright green eyes and brown hair, he looked like any other teen you might see walking around. A mole on his chin one of his only distinguishing marks.

Wearing blue, nylon shorts and a red tank top on that hot August day, Jeremy was last seen that afternoon in a vehicle with a young man named Terry Lee Steinhoff.

Investigators say Steinhoff, while not a suspect, is a person of significant interest. Complicating matters further, however, is that Steinhoff is dead. He suffered a heroin overdose in prison in 2007, while serving time for the murder of a Coos Bay woman two years after Jeremy went missing.

In January of 1989, in the same week that Unsolved Mysteries aired a segment on the Jeremy disappearance, Steinhoff pleaded no contest to stabbing Patricia Morris, a 32-year-old mother of two, multiple times in the throat and leaving her for dead near the Pan American bar in Coos Bay the previous May.

A number of theories center around Steinhoff, who once baby-sat for Jeremy. Was he shot at while swimming in a pond? Drugged at a party? Abused? Or some variation of those theories?

Zanni believes each may hold a grain of truth, but they have never been able to prove nor disprove those possibilities. Since Jeremy has never been found, Zanni’s own belief remains just another theory.

“I think that he disappeared the afternoon, or the early evening, on the 14th,” Zanni said. “I think he was probably, obviously, dead and dumped. Probably by the next morning.”

Regardless, the fact that Steinhoff was the last person seen with Jeremy remains noteworthy for investigators.

Time to resolve the mystery

S’te Elmore and Beatty both live in Washington now, keeping a close eye on S’te’s own growing family.

“Of course I’ve got hope. We hear all the time of miraculous things happening,” Beatty said by phone Friday. “Honestly, I don’t know what happened, I can’t even imagine. With no starting point there’s no place to go. I still have nightmares about what could have happened, but just hope it didn’t.”

Zanni and Looney walk past a picture of Jeremy in their office every day, making sure the case stays at the front of their thoughts.

“My heart goes out to the family, and I will tell you that I think of those people daily,” Zanni said. “It’d be the right thing to do to finally bring this to a close for them.”

In a case with few certainties, both investigators and family believe there is one more: that there are others out there who could bring this decades-old nightmare to an end with a single phone call.

“I honestly believe there are people who know what happened, know where he is and who was involved,” S’te Elmore says. “I hope someday they will come forward and not let the fear of those involved keep them from (doing what’s right).”

Reporter Thomas Moriarty can be reached at 541-269-1222, ext. 240, or by email at thomas.moriarty@theworldlink.com. Follow him on Twitter: @ThomasDMoriarty.

I hate to say it, but I am wondering if anyone knows. One would think that after over 28 years someone would've spilled it by now. From what I understand, authorities have looked everywhere: followed up on leads, drained ponds, looked in beaver damns. Etc and still nothing.

I was told guy brown was there and that he was buried up lee valley rd in a rock pit! He was an innocent young boy that was slipped drugs and bulled and forced to take drugs and he drown beachside of mean older guys! Have a heart do the right thing and come forward! Let his family have some closure! This breaks my heart as I have a 15 year old and I grew up in myrtle point and I am now 43.

Even though they were told where he was they would not believe this and the story continues on. They were told by an inmate that new what happened he told them he was dumped down an old mine shaft but the story goes on

where does it say that?