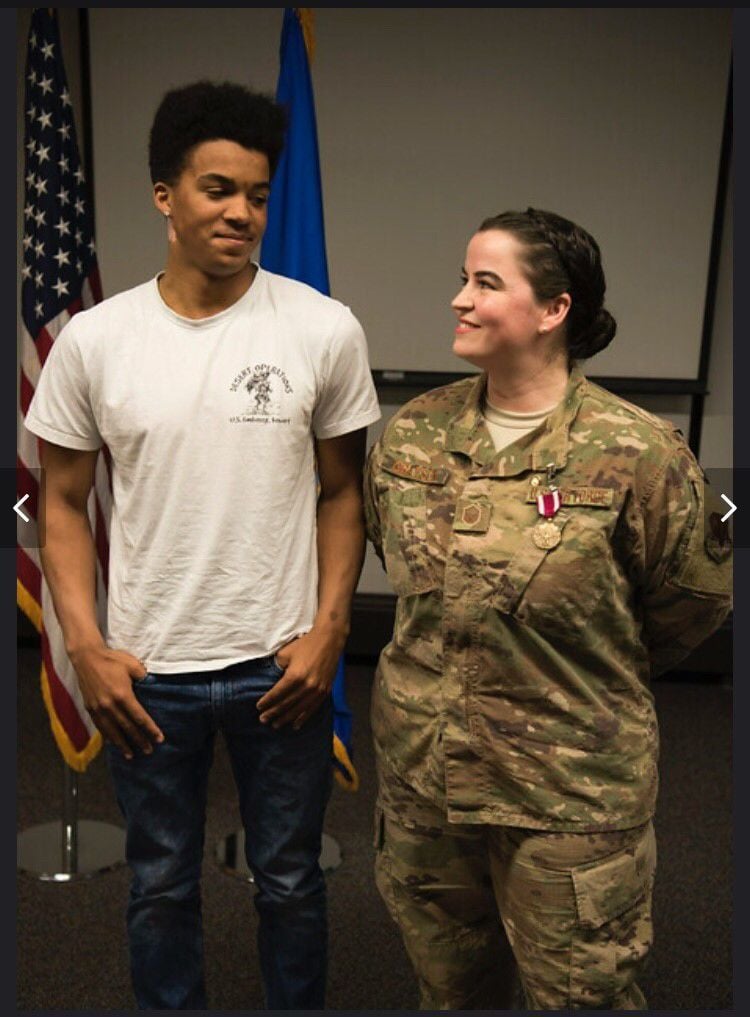 U.S. Air Force Master Sergeant Annie Grayson smiles up at her son during her retirement ceremony in September of 2019. 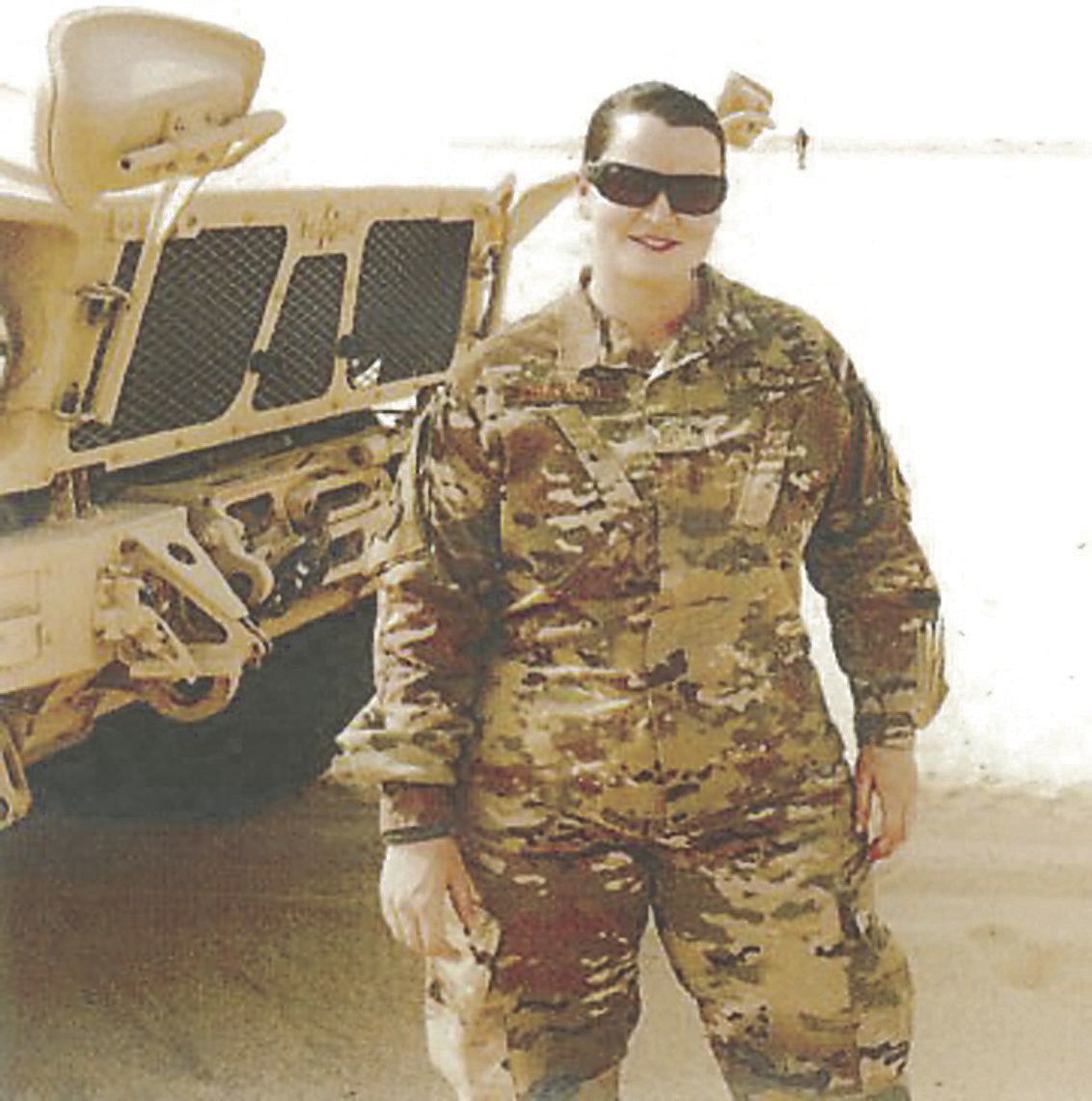 U.S. Air Force Master Sergeant Annie Grayson stands beside a Humvee while deployed during her 21 years in the service. 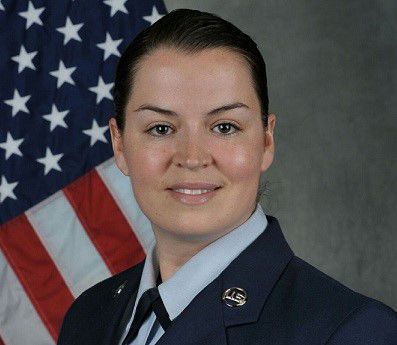 COOS BAY — During her 21 years in the U.S. Air Force, Master Sergeant Annie Grayson’s most prized possession is a plaque that says, “Mom and medic, you can do it all.”

“To me, that meant more than any accolade the Air Force gave me because it was my passion to be the best,” Grayson said.

Grayson, who works for The World newspaper as a sales executive, retired from the service in September, but looked back at her two decades as a medic with pride. She got into the service right out of Marshfield High School when she visited a friend’s house whose dad was a military recruiter.

“He said if I wanted to do this, I needed to keep my nose clean to get out of here and see the world,” Grayson remembered. “And I did.”

Though her grandfather, cousin and uncle were in the military, none of her immediate family that she knew well had served. When she signed up, she said her family was proud but scared.

Grayson had hoped to be stationed close to home, filling out her “dream sheet” of where she wanted to go with Washington state, Nevada and California. But instead she was sent to Turkey at 17 years old.

“I was sent to the furthest point,” she said.

After landing on the other side of the world, Grayson knew no one.

“There I was just young and doe-eyed, holding my folder, standing there not sure what to do,” she said. “It was before cellphones and you couldn’t just call someone because it’s a foreign country.”

However, she was supposed to be met by her sponsor at the airport but discovered later that he was inebriated and not where he was expected.

“It was a rocky start,” Grayson said. “But there was another American, a first sergeant, who didn’t know me but came up, showed me his ID card and asked where I was headed.”

During her almost two years in Turkey, a large earthquake shook the middle of the country, the Y2K “end-of-the-world” panic struck during the new millennium, and Grayson wore chemical warfare gear for three days straight.

“Russia was threatening to launch nuclear missiles so we had worked and slept in that gear,” Grayson said, describing it as a “very warm” hazmat suit. “It was a little scary, but it prepared me for the rest of my 21 years.”

It led her to rely on her core principles of “integrity first, service before self, and excellence in all we do.”

U.S. Air Force Master Sergeant Annie Grayson stands beside a Humvee while deployed during her 21 years in the service.

Though Grayson was never on the front lines in combat, she saw traumatizing situations as a medic while fellow servicemen and locals in surrounding communities were caught in the crossfire. In just her first six months in Turkey, she witnessed death for the first time.

“I remember a young boy who was hit and his mother and father carried him to me and my medic counterpart,” Grayson said. “You want to save everyone, but you can’t save everyone all the time. You do what you can. It taught me a lot of myself, of something I’ve always struggled with, that when asked if I can help I don’t say ‘no.’”

The boy’s parents gripped her jacket, asking her to help their son, as she did compressions for 45 minutes.

“It was very traumatic but set the tone that this is what you’re going to deal with,” she said. “You can’t save everyone.”

After her deployment in Turkey, Grayson moved on to a station in Hawaii and stayed there until 9/11.

“I was in Hawaii for six months when they sent me back to Turkey,” Grayson said. “When they sent us back, people who lived there remembered me like no time had passed.”

During that second deployment to Turkey, Grayson was pregnant with the son she lovingly jokes as her “Hawaiian love child,” who was born Sept. 20, 2002.

“I was a single parent not only to my son, but I adopted my oldest nephew so I have two kids and being in the military full time and moving everywhere, you don’t have family to be your backup in case you need something,” she explained.

By the time Grayson left the Air Force, she was wearing a knee brace and had a spinal fusion after being in several Humvee rollover accidents. She retired early not because of her injuries, but because she felt the need to be with her children full time.

As Grayson described it, during her recent deployment to Kuwait she left her son in the hands of coworkers and discovered he wasn’t taken care of the best he could have been.

“I had to piecemeal a family care plan together because I didn’t have anyone else to leave them with,” she said. “But my son had some problems when I deployed. The people who were watching him didn’t. After I saw how my son was treated … when I got back, I was done. The one thing I care about more than life itself, (they) just s*** on.”

Though she is proud of her time served and doesn’t regret her last deployment, “I have to be here for my son.”

As Veterans Day approaches and Grayson eases back into civilian life, she sees her son attend her old high school in Coos Bay and enjoys watching him make the sports section in The World most weeks for “his super star returns” during football games.

Though she is glad to be near her family and being home again, she is disturbed by the number of homeless veterans.

“It is unnerving and heartbreaking,” she said. “From the standpoint of a veteran, it is hard to come back into the civilian world and function. Some don’t want to deal with it.”

Grayson asked for people this Veterans Day to be thankful and considerate of veterans because “everything we do abroad is making sure what is out there doesn’t come home.”

Construction on McCullough Bridge is shut down for the winter, with work scheduled to resume when the weather improves next spring.