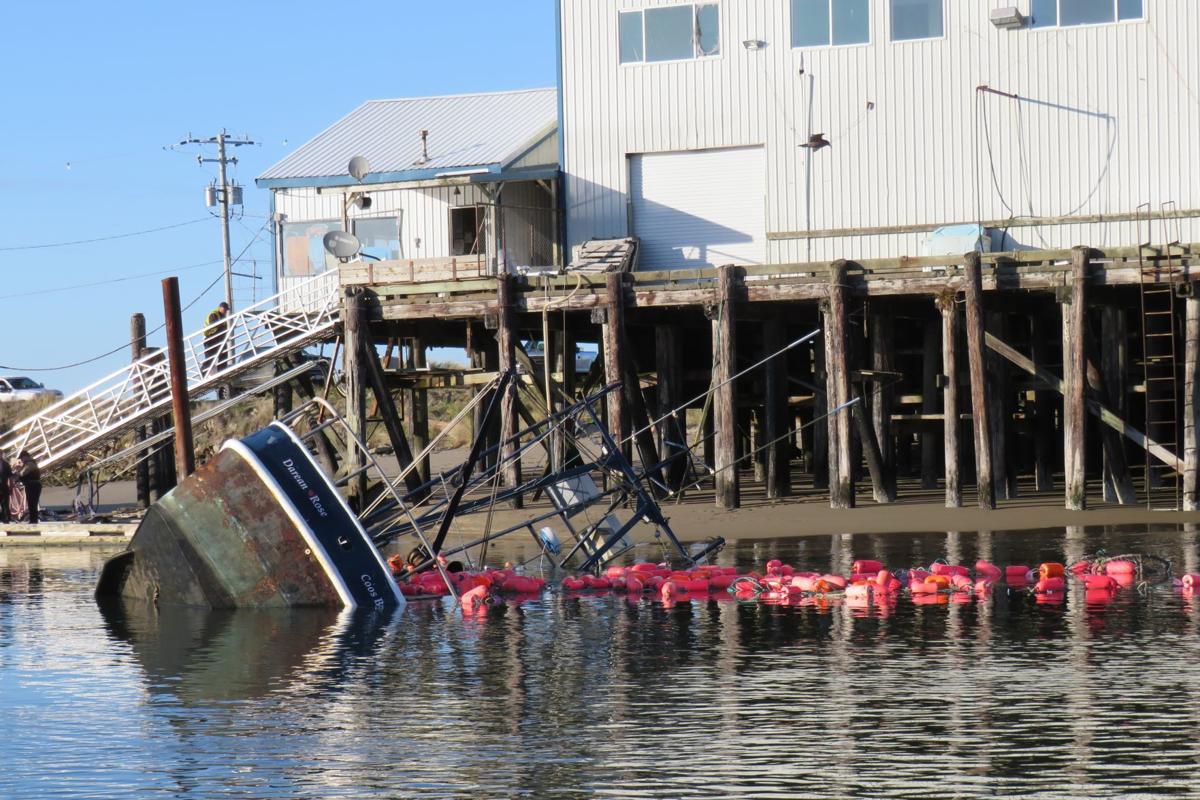 The afternoon of Dec. 26, the fishing vessel Darean Rose out of Coos Bay reportedly hit a sand bar and sank at the Charleston fuel dock fully loaded with crab gear. The commercial crabbing season begins Dec. 31 and fishermen routinely set their pots several days prior to the annual opening. 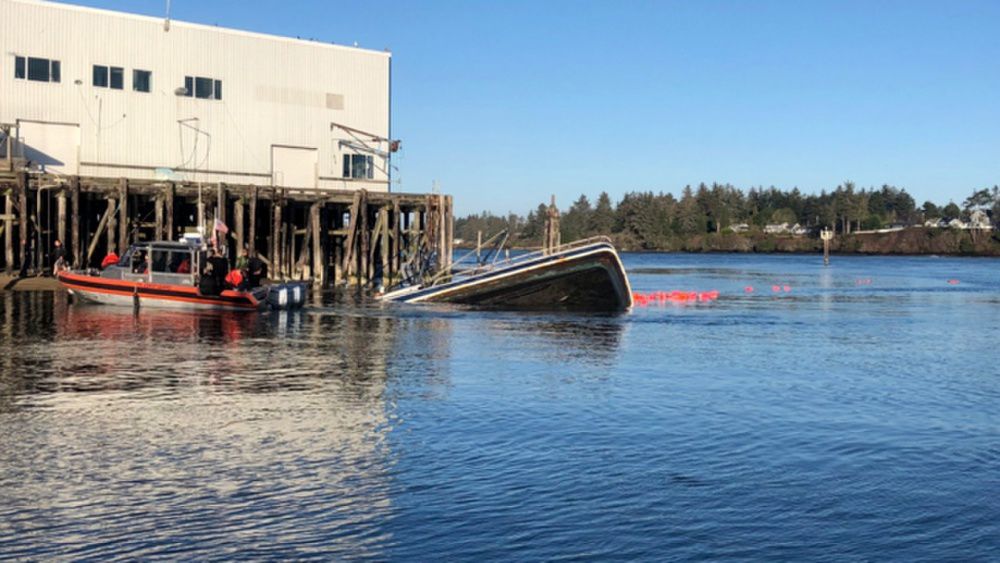 The 40-foot Darean Rose capsized yesterday in the Charleston marina.

CHARLESTON — When the 40-foot Darean Rose capsized yesterday in the Charleston marina, Curtis Green leapt off the docks to rescue the men drowning inside.

“I was on the breezeway when (the boat) got caught on the sandbar,” Green said, operations manager at Russell’s Marine Fuel and Supply. “It was calm waters, a nice day. You wouldn’t think it would turn into what it did.”

In a press release from the U.S. Coast Guard 13th District PA Detachment Astoria, Sector North Bend was first notified of the vessel in distress at 2:54 p.m.

Green watched as the Darean Rose started taking on water. As he described it, the boat sloughed off the sandbar and flipped, dropping crab pots as it did and throwing a man into the water.

“At that point, I didn’t think anyone was in immediate danger until I saw the wheelhouse full of water,” Green said. “Then I saw the people inside beating on the glass. They couldn’t get out because the crab pots blocked the back door.”

From where Green stood, the boat was maybe 30 feet away in 10 feet of water. Seeing the three trapped men, Green grabbed a hammer, ran down the ramp and jumped off the dock.

“The minute I hit the water, I didn’t know if I’d be able to swim over because I cramped up,” he said. “Swimming with your clothes on and a hammer in that cold water, you don’t move very fast.”

When he got to the boat, Green started beating on the glass, hitting it maybe 40 times.

“I could see the whites of their eyes,” Green remembered. “It wasn’t until I was out there that I realized how scary it was. Within minutes they were taking their last breaths of air. I was crying with them.”

He recounted watching them just below the water’s surface behind the glass, an eeriness that kept him awake later that night.

“I’m not a religious person, but I asked God to let this hit to the glass be the last one,” he remembered, while at the same time his foot got caught in the debris and he feared that he would drown with them.

Green smashed a piece of debris into the window, which made a groove-shaped crack. When he reached back for his hammer, the boat shifted and it fell into the water.

With no other options, Green used his fist instead.

Green pulled the three men out of the wheelhouse and then sat together on the bow.

The 40-foot Darean Rose capsized yesterday in the Charleston marina.

Green injured his hand breaking the glass. In the press release, the Coast Guard reported that the survivors were transferred back to the pier and treated by emergency medical service technicians for minor scrapes and bruises.

According to the release, the vessel had an estimated potential of 1,200 gallons of diesel fuel on board. USCG personnel from Sector Columbia River Emergency Management Division responded to the potential for environmental pollution by deploying hard boom and absorbent pads.

The cause of the incident is under investigation.

“I hope maybe the community can pull together and someone can take their crab pots out even though their boat has gone down,” Green said. “People live off what they make during crabbing season, so I hope they don’t lose out on any money… It’s crazy how fast it happened. I’m just glad they’re okay and can go home.”

Howdy y'all, I know you haven't been on the ocean lately because almost no one has. All but the largest commercial crab boats have been stuck …

That’s when family, friends and former students will gather to remember Bill Horning.