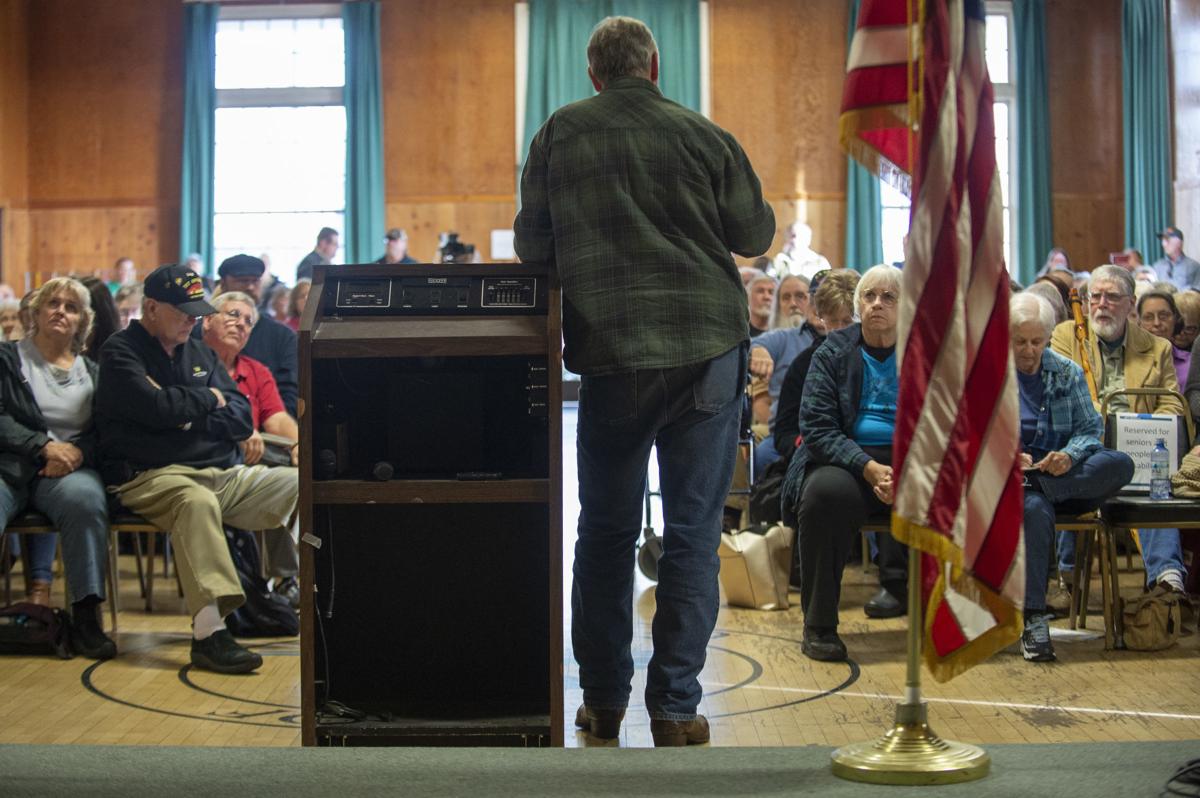 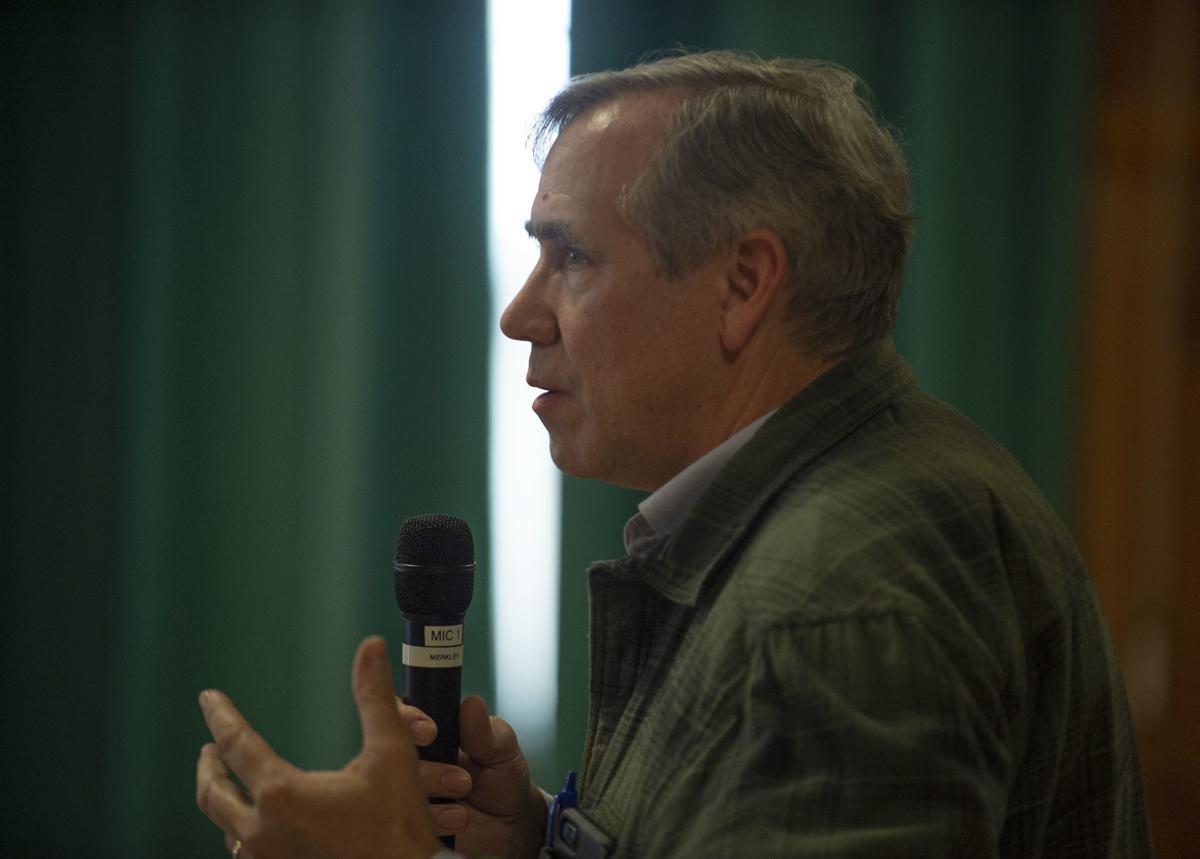 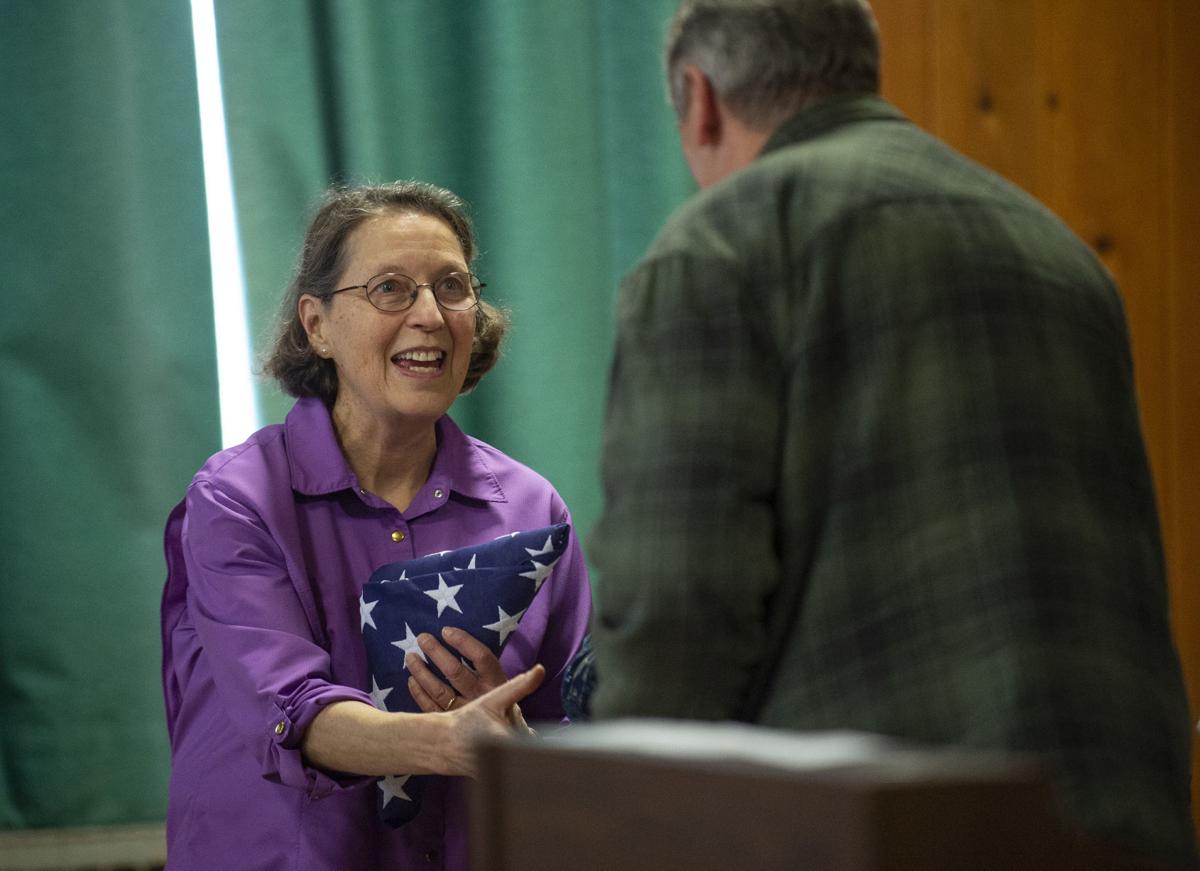 Oregon Senator Jeff Merkley hands a U.S. flag to Linda Kirk with Operation Join the Rest of the World (OpJo), thanking her group Thursday during a town hall meeting at the Coquille Community Center. OpJo, a coalition of residents and organizations, worked on a successful campaign to bring high-speed internet to the Dora-Sitkum area. 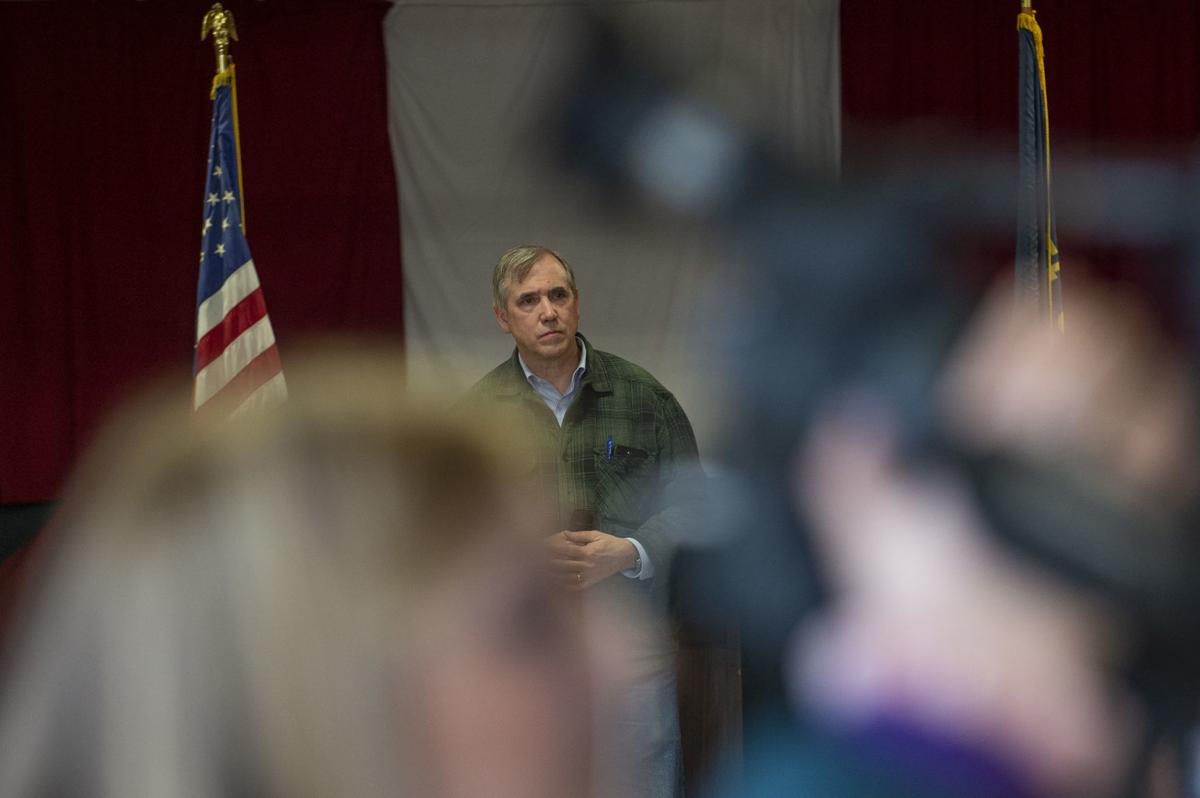 Oregon Senator Jeff Merkley listens to a question Thursday from an attendee during a town hall meeting at the Coquille Community Center. 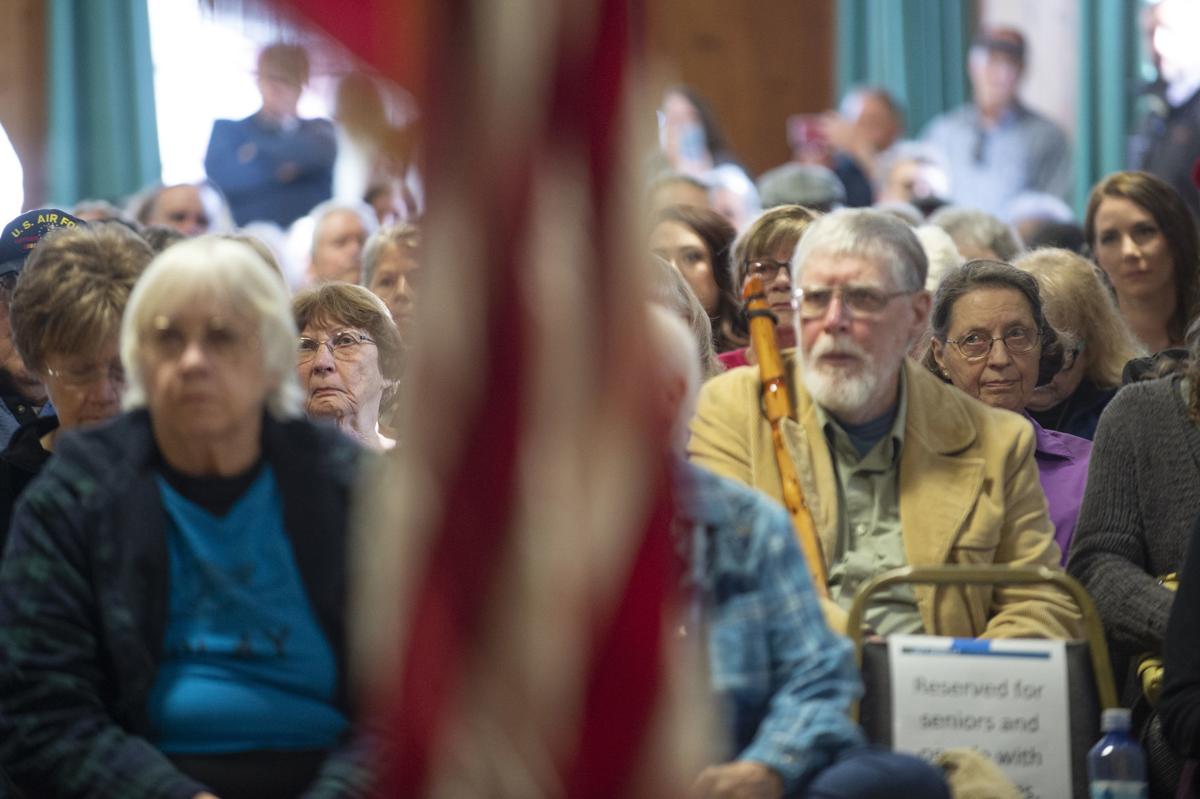 The event, which was held at the Coquille Community Center, marked Merkley’s 398th town hall meeting in Oregon since first joining the Senate in 2009. He was scheduled to hold a town hall in Port Orford later that day.

“My main goal in these town halls is to listen to what’s on the mind of our citizens in different parts of the state,” said Merkley. “It just really helps me think about what projects I can help with.”

From homelessness to climate change, a host of issues were discussed Thursday as folks raised their concerns with the longtime senator. A high school student from Coquille, who was worried about the recent adjustments made to the Supplemental Nutrition Assistance Program, asked Merkley how the changes would impact students who receive free school lunches.

Last month, the Trump administration approved a rule-tightening eligibility for SNAP benefits affecting tens of thousands of people who receive governmental assistance. As a result, low-income students would no longer receive automatic approval for free lunches and would instead be required to apply.

Merkley shared the student’s concern stating that Oregon is one of the hungriest states in the country and that food banks alone would not be enough to compensate for the huge difference the changes would create in feeding families in need.

A question about a lack of dredging was also brought up by a local business owner who informed Merkley of a recent accident involving a 40-foot boat that capsized last week in the Charleston Marina.

As previously reported in The World, Curtis Green, a bystander who witnessed the accident, said the boat took on water after getting caught on the sandbar. Green rescued three men who were trapped inside.

A roar of applause and cheers came from the crowd as the business owner described the accident and Green’s heroic efforts. Merkley commended Green for his role in saving the men’s lives and praised him for taking swift action.

“There is a list of ports that the (Army) Corps of Engineers has had on their responsibility list and to my knowledge all of them have basically been dredged on a one-to-three-year cycle,” said Merkley. “We’ve been able to achieve this by getting a dedicated set-aside for small ports.”

Oregon Senator Jeff Merkley listens to a question Thursday from an attendee during a town hall meeting at the Coquille Community Center.

Merkley, who serves on the Senate Appropriations Committee, worked with U.S. Sen. Ron Wyden and U.S. Rep. Peter DeFazio to secure funds for small ports and Army Corps navigation which for the 2020 spending bill included about $65 million for small ports.

Merkley said he would look into the status of the Charleston marina to see if it’s a part of the Army Corps program as well as to find out if it had either been missed or needs to join the program. Concerns over climate change and the timber industry were also raised Thursday as people cited dramatic shifts in the state’s natural resources.

One woman asked what the senator was doing to clean up federal lands to ensure its safety from forest fires. Merkley replied that he will continue to advocate for a number of wildfire prevention initiatives such as prescribed burning and forest thinning. Merkley also answered a question about “The Green New Deal,” a resolution he co-sponsored last year which is a call-to-action to address and combat climate change.

Other questions asked at the town hall included concerns over the lack of funding for the Individuals with Disabilities Education Act and its effects on special education, as well as questions on recommended vaccines in the U.S., socialism and immigration, among others.

A community member also asked Merkley if no statutory felony is discovered could he still be counted on to vote for the impeachment of President Donald Trump as the case moves to the Senate.

Merkley responded that he will uphold the oath to be an impartial juror and not pre-judge the specifics of the case until it’s presented before them. He noted the case is complicated and unlike anything in the past, but that he plans to approach it with complete fairness.

In addition to the town hall’s Q & A, local community members with Operation Join the Rest of the World (OpJo), a coalition of residents and organizations, were recognized by Merkley for their successful efforts in bringing high-speed internet to the Dora-Sitkum area.

Jennifer Croft, Tara Johnson, Linda Kirk and Betty Vaughn, of OpJo, accepted a flag, which was flown over the U.S. Capitol, for their accomplishments in bringing high-speed internet to the Dora Library and creating a cell phone hotspot at the Dora-Sitkum Fire Hall.

“We’re grateful to Sen. Merkley and his staff who helped with our goals,” said Kirk. “We worked together on two main goals which was to bring cell coverage and broadband services to Dora-Sitkum.”

Over the summer, the coalition, which consists of Dora Library, Dora-Sitkum Rural Fire and a number of local community members, worked with numerous community partners to obtain the services, including Douglas Fastnet and the Coos County Library District.

According to Kirk, the coalition hasn’t quite met its goal and is still working to secure services for each household in the area as well as for the entire county. As a member of the Rural Development Subcommittee, Merkley has worked for years to invest in rural broadband.

“The next step for internet as far as rural areas would be trying to get it to (the city) of Powers,” said Croft. “There is a huge lack there and they need to have the same kind of successes that the Dora-Sitkum area has had.”

The town hall’s final comment came from a community member who expressed his concern and frustration with being labeled a racist, bigot or homophobic for his opposition to undocumented immigration. The community member said he along with others who share his opinions are often labeled racist by folks who know nothing about them.

“I do preach this philosophy of talking to each other and sitting down and working things out,” said Merkley. “I think the point you share is one we all benefit from. Let’s listen to each other talk about the issues and not pre-judge anyone.”

The name calling and labeling needs to stop, said Merkley who talked about the urgent need for a more comprehensive immigration system that is both fair and timely. He ended the town hall again thanking everyone who attended and to those who shared their viewpoints.

Which season are you?