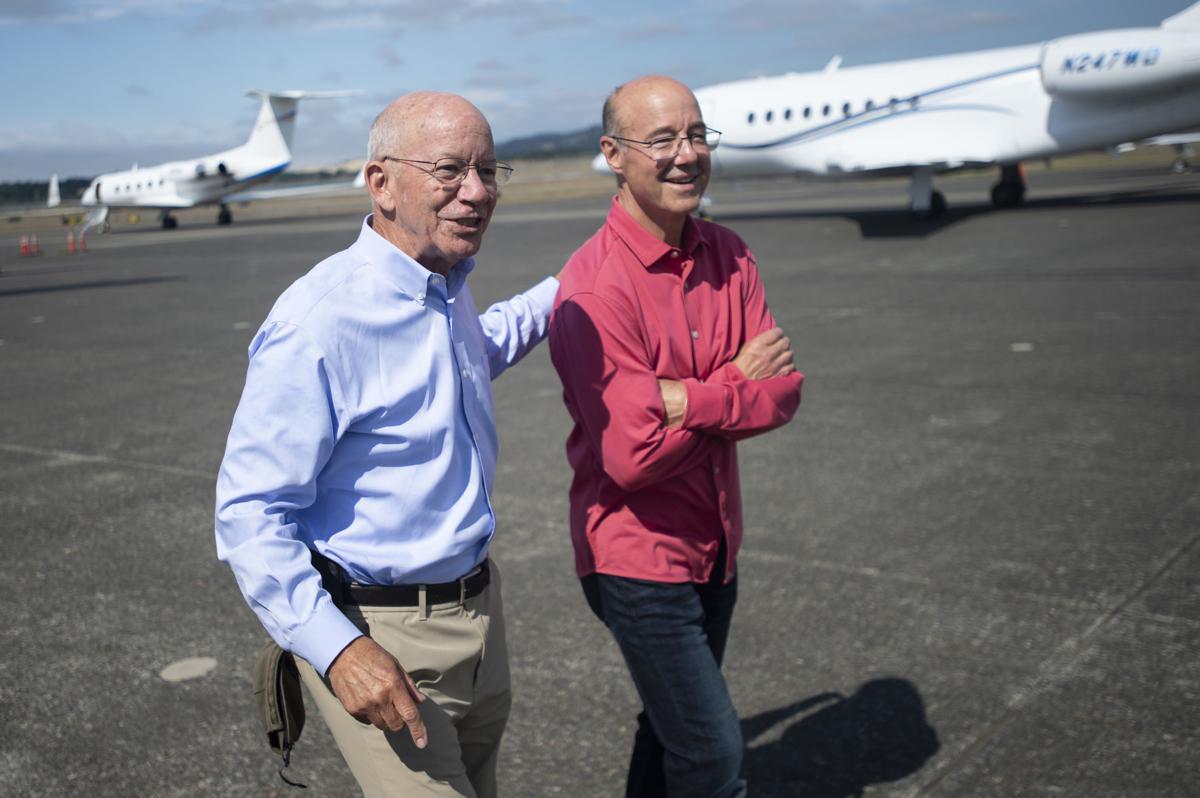 U.S. Rep. Peter DeFazio, left, walks on the tarmac with Coos Bay Mayor Joe Benetti during a visit to the Southwestern Oregon Regional Airport with in North Bend. 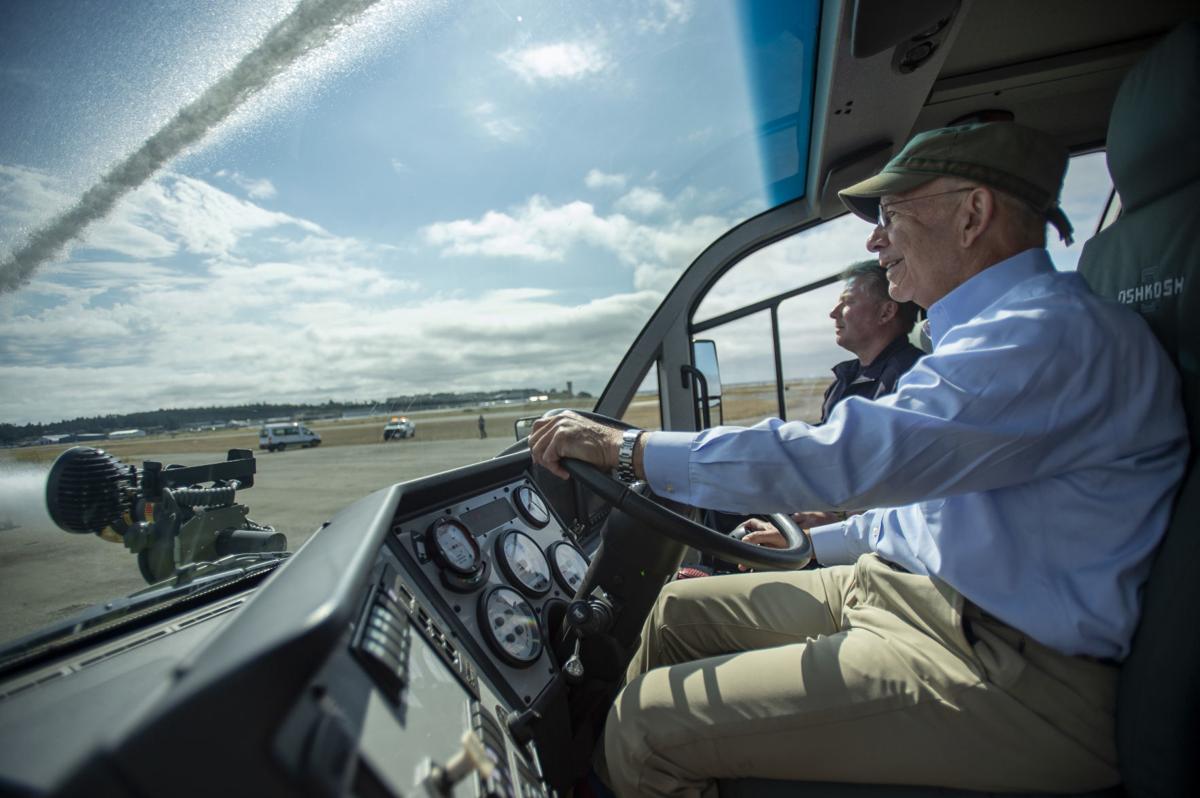 U.S. Rep. Peter DeFazio, right, fights a fire from behind the wheel of an Airport Rescue and Fire Fighting truck during a visit to the Southwestern Oregon Regional Airport in North Bend. Airport Operations Manager Bob Hood, left, gave DeFazio a quick lesson before he drove across the tarmac to the training fire during his tour of the airport. 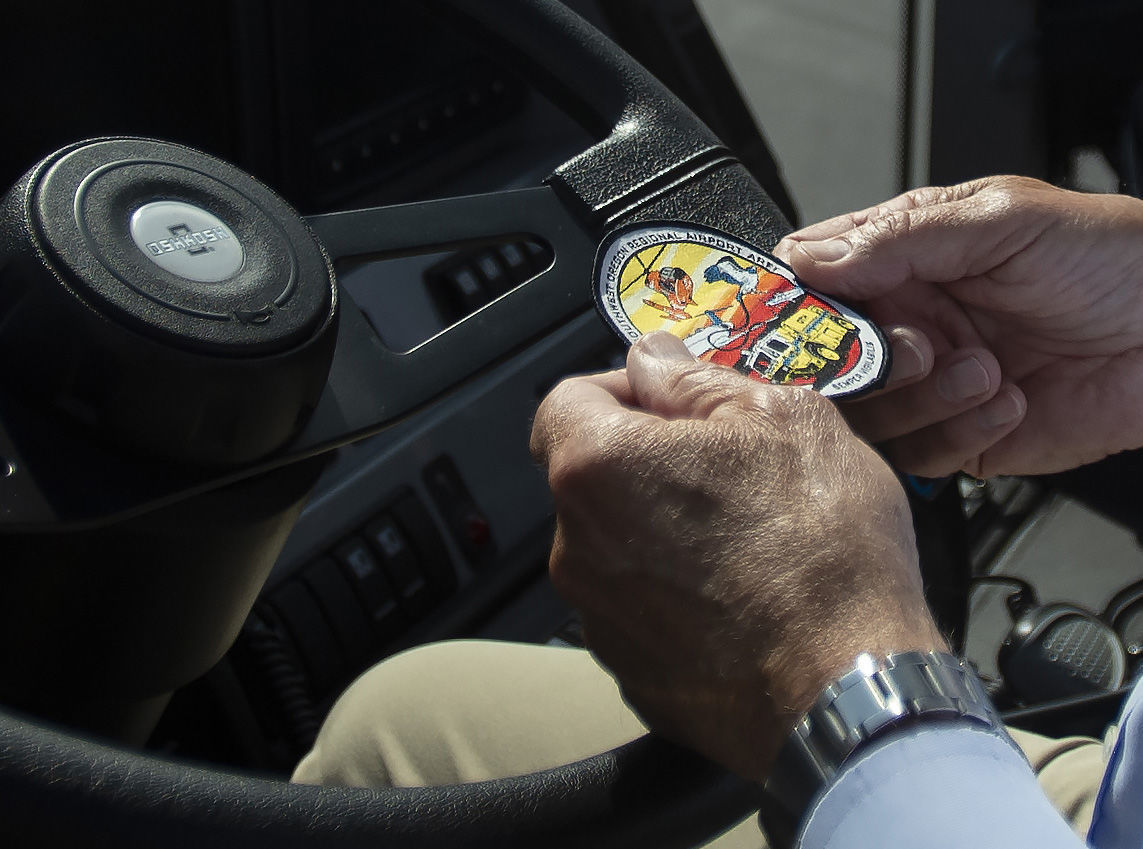 Peter DeFazio looks over a patch given to him Wednesday after a jaunt behind the wheel of a Airport Rescue and Fire Fighting truck during a visit to the Southwestern Oregon Regional Airport in North Bend. 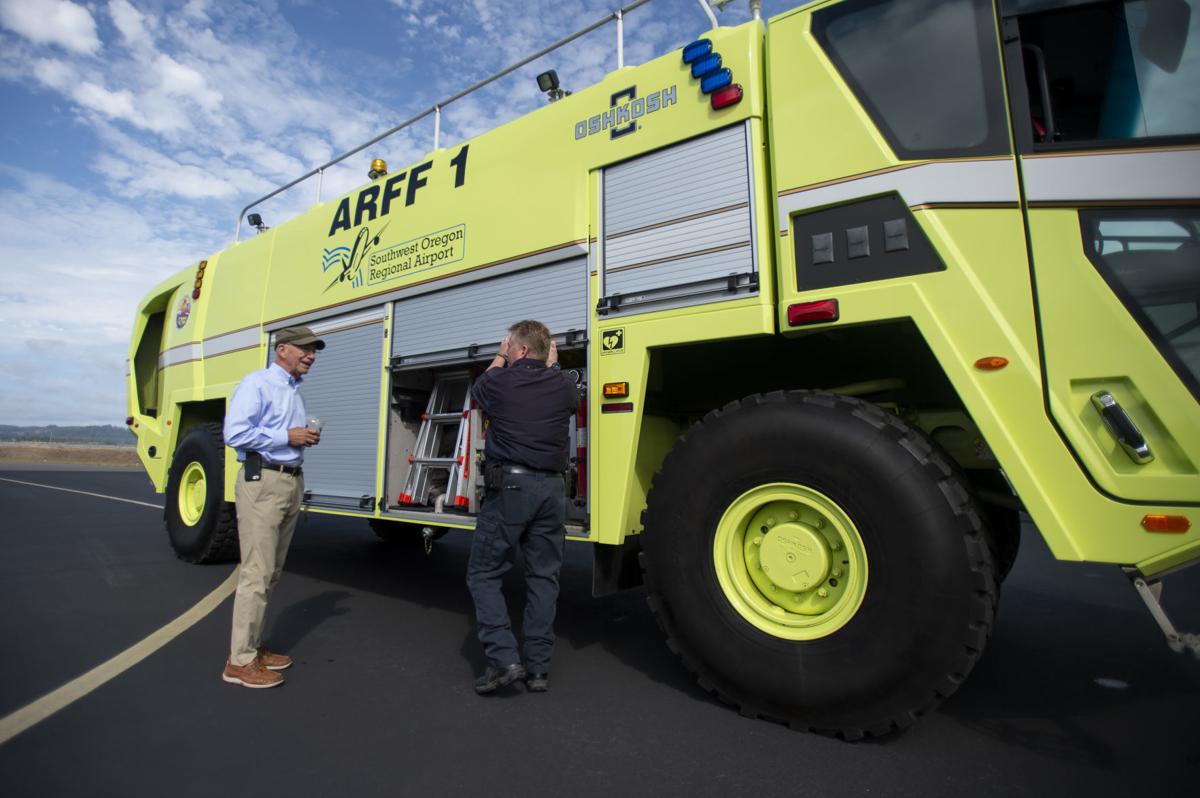 U.S. Rep. Peter DeFazio, left, gets a look inside of an Airport Rescue and Fire Fighting truck during a visit with Operations Manager Bob Hood at the Southwestern Oregon Regional Airport in North Bend.

U.S. Rep. Peter DeFazio, left, walks on the tarmac with Coos Bay Mayor Joe Benetti during a visit to the Southwestern Oregon Regional Airport with in North Bend.

U.S. Rep. Peter DeFazio, left, gets a look inside of an Airport Rescue and Fire Fighting truck during a visit with Operations Manager Bob Hood at the Southwestern Oregon Regional Airport in North Bend.

NORTH BEND — On Wednesday, Peter DeFazio sped around the tarmac at the Southwest Oregon Regional Airport in one of the bright green Airport Rescue and Fire Fighting trucks.

He even put out a staged airplane fire with the truck’s water cannons.

“I appreciate that they let me drive the ARFF,” DeFazio shouted over the truck’s engine as he sat in the driver’s seat grinning from ear to ear. When asked how it felt using the water cannons, he joked that it was like using “the world’s largest squirt gun.”

The U.S. Representative for Oregon's 4th Congressional District, serving as Chairman of the House Committee on Transportation and Infrastructure, DeFazio has held a protective hand over the Southwest Oregon Regional Airport for decades. His Wednesday, Aug. 28 tour of the airport was his first, wrapped into his annual southern Oregon coast tour to touch base with his constituents. His airport tour took place hours before his Coos Bay town hall at the Coos History Museum.

Just this year, DeFazio was instrumental in securing a $6.5 million grant from the Federal Aviation Administration’s Airport Improvement Program. The grant will be used to construct a new Airport Rescue and Fire Fighting Station.

The airport’s current station is too small to fit the existing ARFF truck that DeFazio drove, which is instead being stored in a nearby hangar.

“He will be visiting the site where the new ARFF station will be,” said Teresa Cook, airport CEO the morning of DeFazio’s tour. “He will meet with a couple of airport commissioners. He has been very instrumental in everything we applied for in funding from the federal government. We usually get written support from him.”

“From this trip, we want him to understand, which he does, that rural airports are important,” Benetti said. “We hope to get guidance and ideas from him on how to get air service to Portland. That’s our main objective.”

When DeFazio arrived at the airport, he pointed out the terminal’s bay windows to the control tower and said it was an “earmark,” a piece of the airport he is proud to have helped make possible.

U.S. Rep. Peter DeFazio, right, fights a fire from behind the wheel of an Airport Rescue and Fire Fighting truck during a visit to the Southwe…

“The coast is underserved,” DeFazio said. “Without the regional airport, people would drive four hours to California. It’s critical to this community. Our air service is not optimal. We used to have air service to Portland and I hope to bring that back, something dependable. We have a beautiful new terminal, got the runway extended, got the control tower, we’re in a good position. We’re ready for more air service.”

Coos County was at the end of his South Coast tour, where he visited the Rogue River and took a tour with the U.S. Coast Guard, visited Port Orford and saw the breakwater being restored, and Brookings where he got an update on the Hooskanaden slide, which took out part of U.S. Highway 101 during the record-breaking February storm.

“We have federal emergency money that restored (Highway 101) to two lanes and it will be back to three lanes by winter,” he said. “(Oregon Department of Transportation) does not have a permanent solution and it’s up to them to figure it out. The two solutions are between $300 million to $500 million, so we need some other alternative. ODOT says fixing it as it happens would be one thousand years before we get to the cost of a permanent fix.”

DeFazio’s tour of the airport lasted an hour before he got back on the road to do his town hall in Coos Bay.

This summer the International Port of Coos Bay staff worked with the Oregon State Marine Board and Oregon Department of Fish and Wildlife to replace the launch ramp docks in the Charleston Marina.